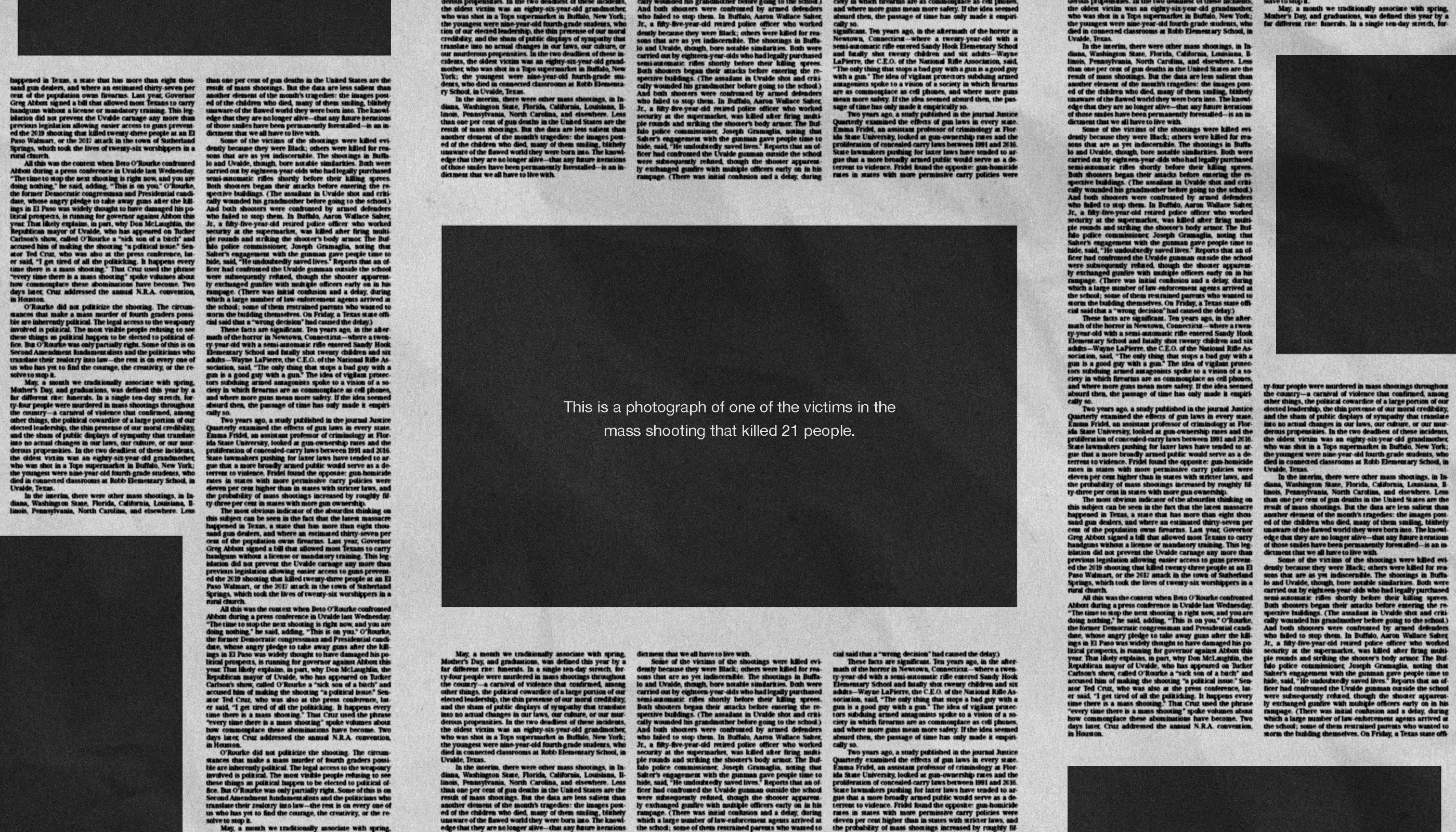 On an evening seven years ago this month, a twenty-one-year-old white supremacist named Dylann Roof entered the Emanuel A.M.E. Church on Calhoun Street, in Charleston, South Carolina, pulled a semi-automatic handgun, and murdered nine Black congregants, in the midst of their Bible study. When he was arrested, the following day, he confessed to the murders, citing a convoluted theory of defending white sovereignty as his rationale. In the years since, his reasoning has become no less opaque, even as similar thinking has become more commonly articulated. But, as if to demonstrate the clear horror of its impact, the prosecution in Roof’s trial, in December, 2016, exhibited images from the crime scene. The tableaux of death brought gasps and quiet sobs from those in attendance, some of whom were survivors of the attack, others relatives of the victims.

The root of their pain lay in the photographs’ gruesome specificity and its capacity to answer in precise detail questions that were too lurid to have occurred otherwise: how the bodies lay; how the dead faces were contorted; how the spatters of blood patterned the walls. Many in the courtroom, journalists and family members alike, averted their eyes. It seemed that the cumulative detail of those images could tell them little that they did not already know: nine people were dead for no other reason than the color of their skin.

That moment returns to mind in the aftermath of yet another mass shooting, in which yet another group of innocents was slain for arbitrary, inscrutable reasons. The deaths of nineteen children and two adults at Robb Elementary School, in Uvalde, Texas—just days after the shooting deaths of ten adults at a Tops supermarket in Buffalo—have provoked new waves of frustration and despair, and new demands for change. The sheer redundancy of these needless tragedies has people searching for any dynamic that might finally effect a meaningful response to them. David Boardman, the dean of Temple University’s Klein College of Media and Communication, wrote, on Twitter, “Couldn’t have imagined saying this years ago, but it’s time—with the permission of a surviving parent—to show what a slaughtered 7-year-old looks like. Maybe only then will we find the courage for more than thoughts and prayers.”

In the past week, others have begun to consider the idea. The Times ran an exploration of the politics of graphic images and their power to shape public opinion, and CNN’s Brian Stelter took up the issue on his show. Many people, having repeatedly grieved children murdered by semi-automatic weaponry, have come to suspect that only showing what an AR-15-style rifle actually does to a child’s body will shock gun-reform opponents out of inaction. But, while this thinking is understandable, it is probably misguided, and potentially self-defeating. Showing such images could cause the sympathetic public to avoid media coverage of these incidents; for those who do look, it might risk inuring them to the terrible nature of gun violence. The most commonly cited example in defense of the practice is Mamie Till’s decision, in 1955, to let Jet magazine publish photographs taken of her lynched fourteen-year-old son, Emmett Till, as he lay in an open casket. No one who has seen the grisly abstraction of his face has difficulty recalling it.

Mamie Till reportedly told John H. Johnson, Jet’s publisher, that she wanted to show the world what had been done to her son. Her audacious decision not only morally indicted the men responsible for Till’s death—that year, none were found guilty by a court—but galvanized public opinion against segregation and Jim Crow. Yet it is important to recall that Till was far from the first lynching victim to be photographed, and the overwhelming majority of those images, some of them even more graphic and sickening, had no discernible effect upon public opinion, and may even have reinforced the crude propensities of those who saw and circulated them. (Many of the photographs survive because people turned them into postcards.)

“Without Sanctuary,” an exhibit of lynching photographs that first opened at a New York City gallery, in 2000, was a window into the abject cruelty of the era, yet the horrors depicted in the images weren’t nearly as striking as the exuberance of the murderers and the onlookers. The historian Amy Louise Wood, in her book “Lynching and Spectacle,” notes that, although we view the pictures as evidence of monstrous cruelty, at the time they were taken they were likely seen as part of a different genre: the hunting photo. In them, men proudly pose near charred and desecrated Black bodies as if they were grasping the antlers of a fallen buck. Most of the imagery associated with lynching had the opposite effect of the Till photograph—serving to further distance the viewer from the victims, rather than humanize them.

Tabloid journalism is often stigmatized for pandering to the basest human inclinations—titillation, cheap horror, rage—but the fact is that no publisher can control how an image will be consumed, no matter how sombre or austere the presentation. Susan Sontag, in “Regarding the Pain of Others,” a book on the politics of war photography, writes that images of atrocities do not convey a single, uncontested message; rather, their meaning depends heavily on their context. A photograph of a slain civilian that evokes sympathy and outrage in viewers on one side of a conflict may engender satisfaction on the other. Dylann Roof, during his trial, sat mannequin-still, his face a mask (though it was reported that he had marked his sneakers with white-supremacist symbols). His stoic demeanor became even more noteworthy during the display of the crime-scene images. The tacit hope is that such a confrontation will force a murderer to realize the evil of his actions—and perhaps to show contrition for them. But Roof didn’t flinch, didn’t glance away, suggesting another possibility: that he could just as easily have viewed the photographs as a testament to his success.

We have to consider all such possible responses, because the latest suggestions that we publish graphic images of mass shootings come from empathetic individuals who want to shock the public into greater empathy, and from there to action. But the violence itself is the product of the opposite sensibility—a profound absence of empathy. The reason that the Emmett Till photo was received differently than other similar images was because of the context in which it was shown. Unlike earlier lynching photographs, Till’s picture was taken by people sympathetic to him, not to his killers. And it was shown to Northern audiences who were both unfamiliar with the peculiar nature of this brutality and disgusted by their introduction to it. In this regard, there is a direct connection between the Till photo and others that have stirred national or international outrage. The 1972 image of Phan Thị Kim Phúc, known as the “napalm girl,” collapsed the distance between the front lines of the Vietnam War and the home front in the United States. The images that emerged from concentration camps at the end of the Second World War horrified a global audience that, despite six years of conflict, was now introduced, through the lens of a camera, to a new tier of human depravity. A photograph taken by the Mathew Brady Studio of a man known as Peter, who escaped from slavery, and whose back was a lattice of scars from the lash, became an enormously influential indictment of that institution during the Civil War.

Those images exposed sheltered segments of the public to cruelties that they were either previously unaware of or which had been subject to dispute. The photographs of Peter, the camps, and Till, in particular, served to dispel official denials that such brutality had ever existed. Similarly, the video of George Floyd’s murder, in 2020, so convulsed the country in part because it captured the extraordinary duration and the slow, deliberate nature of the act, and thus helped settle a debate about whether police killings of African Americans were solely the regrettable result of the split-second decisions that law enforcement is required to make, or whether an element of actual malice is ever involved. (Notably, though, no other police killings captured on video—of Eric Garner, Walter Scott, Philando Castile—inspired such widespread outrage.)