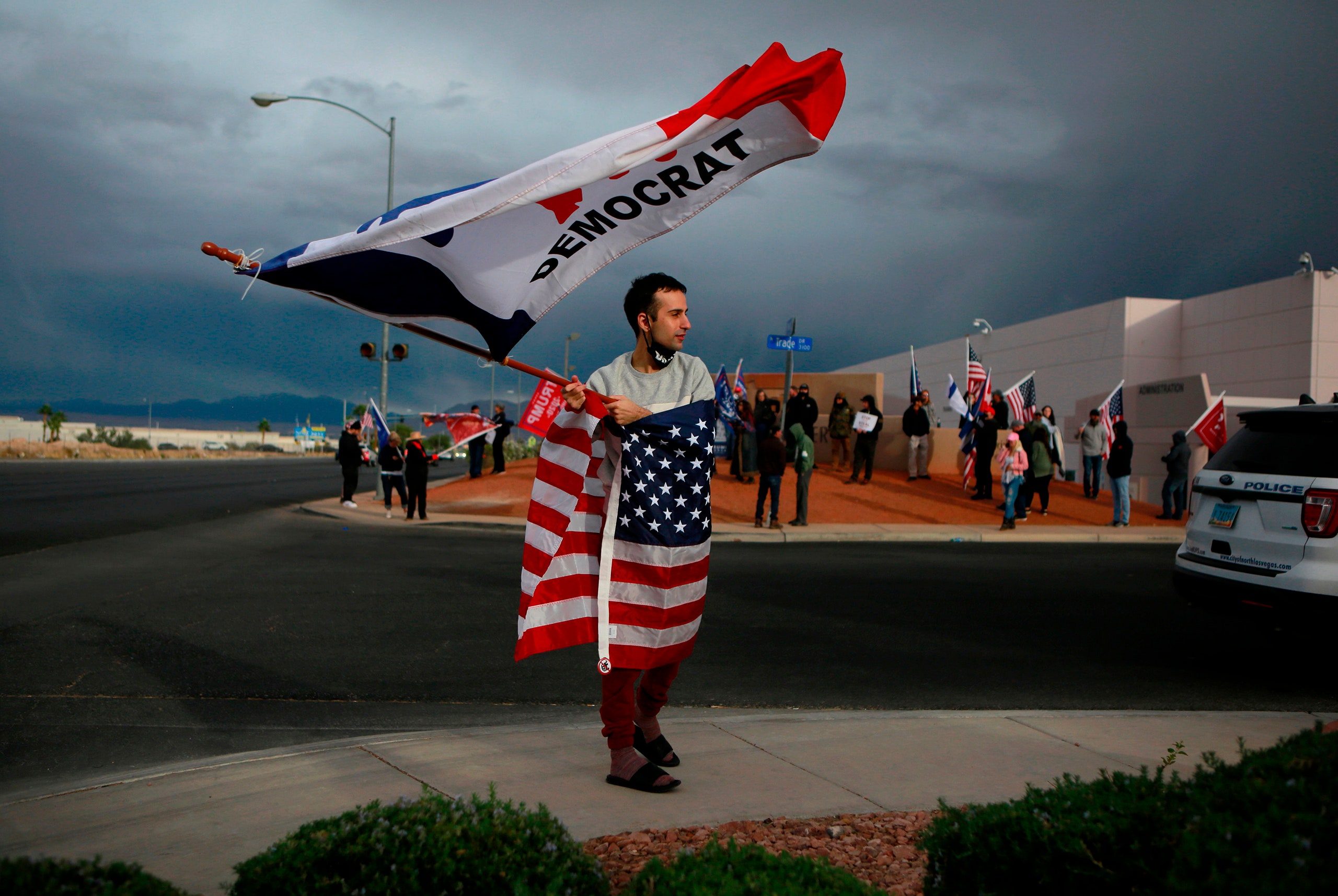 A year after Joe Biden beat Donald Trump in the Presidential election, and nearly ten months after a Trump-led mob laid siege to the nation’s Capitol, a new round of elections yielded mixed results for the Democratic Party, which lost the Virginia governor’s race and came close to losing New Jersey’s. An unrepentant and insurgent Republican Party has motivated its base with the so-called culture war over public-school curriculum, opposition to mask and vaccine mandates, and relentless attacks on the entirety of Biden’s political program. Meanwhile, months after Democrats passed the most expensive domestic spending bill since the War on Poverty, they remain mired in internal conflict over the purpose and possibility of their congressional majority. Political observers have pointed to Republicans’ spirited turnout on November 2nd as evidence that their “culture war” tactics are working. But that doesn’t explain the enthusiasm gap that threatens the political fortunes of the Democratic Party. Unfulfilled expectations, not the often invoked “wokeness,” are what clouds Democrats’ horizons.

The gubernatorial races in Virginia and New Jersey offer only a snapshot of contemporary politics, but both contests have been portrayed as referenda on the Biden Administration. And in both states Biden and his surrogates, including former President Barack Obama, rallied voters in person, indicating the importance of the elections. Afterward, what set off alarm bells among Democrats was Republicans’ enormous voter participation. In Virginia, the former Democratic governor Terry McAuliffe captured almost two hundred thousand more votes than the winning ticket in 2017. And yet he still lost to the former corporate executive Glenn Youngkin, who captured more than four hundred thousand more votes than the 2017 Republican challenger. Republican voters overperformed in every Republican county, indicating their excitement and motivation. Not only did Youngkin win, but his big turnout helped Republicans win down the entire ballot, allowing the G.O.P. to wrest control of the Virginia statehouse from the Democrats.

Although Phil Murphy became the first Democratic governor to win reëlection in New Jersey since 1977, historically high turnout among Republicans across the state made the race much closer than anyone imagined. His Republican opponent, Jack Ciattarelli, a former state representative and a featured speaker at a November, 2020, Stop the Steal rally, trailed by double digits throughout most of the campaign, only to lose by three points. Ciattarelli, who did not concede until more than a week after the race was called, gained almost three hundred and seventy thousand more votes than the Republican who lost to Murphy in the 2017 governor’s race. Even more significant was the dramatic loss of the powerful Democratic president of the New Jersey state senate, Steve Sweeney, to a Republican truck driver, Edward Durr, who had no backing from the state G.O.P. and spent just over twenty-three hundred dollars on his campaign.

What is driving this surge of Republicans to the polls? The Party has found new political traction on invented issues like “critical race theory” in public-school curricula, while still being fuelled by the notion that Trump was robbed of the election last fall. In Virginia, Youngkin deployed an ad featuring a white woman who led a campaign against teaching Toni Morrison’s “Beloved” in Virginia public schools. Youngkin vowed to ban critical race theory in his state’s public schools “on Day One.” But there are also real issues on which the G.O.P. offers positions distinct from those of the Democrats, including the economy, immigration, crime, and federal vaccine mandates. In some areas, Republicans tend to want heightened government action, supporting the police and a tightening of the U.S. border, but they are simultaneously expressing suspicion of the state, opposing Biden’s spending proposals and bolstering claims of government overreach on vaccine mandates. These differing positions, including a fierce opposition to a perceived effort to “defund the police,” allow Republican officials to portray themselves as battling on behalf of an aggrieved voting constituency. Republicans feel as if they are in a struggle for the direction of the country, and they have been able to clearly identify the issues around which they are fighting.

The new momentum for Republican candidates provoked anxiety and finger-pointing among Democrats. Republican gains in presumed Democratic Party strongholds have unleashed dire predictions about the 2022 midterms and assessments that the Democratic Party has been captured by the left, alienating voters with big spending and a politically correct agenda. In some ways, this is a repeat of the intra-party rancor that ensued as the Party assessed its loss of thirteen House seats in the 2020 election. “There has to be a reckoning within our ranks about this because a lot of Justice Democrats”—a progressive group—“don’t give a damn about the Democratic Party,” one unnamed critic told the Washington Post last year. “They’re all about purity and orthodoxy, and it is damaging our opportunities.” This time around, moderates have pointed to the size of Biden’s Build Back Better bill as a culprit in the electoral losses. In dispensing electoral advice to the Democrats, the New York Times editorial board looked to last year’s election and concluded, “Mr. Biden did not win the Democratic primary because he promised a progressive revolution. There were plenty of other candidates doing that. He captured the nomination—and the presidency—because he promised an exhausted nation a return to sanity, decency and competence.” Representative Abigail Spanberger, a Democrat from Virginia, said, “Nobody elected him to be F.D.R., they elected him to be normal and stop the chaos.”

The script of the left mucking up the Party’s chances with “wokeness” also still holds strong. The Democratic strategist James Carville left little doubt where blame lay for the Election Night losses. “Don’t just look at Virginia and New Jersey,” he said. “Look at Long Island, look at Buffalo, look at Minneapolis, even look at Seattle, Washington. I mean, this ‘defund the police’ lunacy, this take Abraham Lincoln’s name off of schools. People see that, and it really has a suppressive effect all across the country.” Carville was pointing, among other things, to the Buffalo mayor’s race, in which India Walton, an activist and democratic socialist, defeated Mayor Byron Brown in the Democratic primary, only to lose the general election to Brown, who launched a write-in campaign. Recently, Walton told a national online audience of progressive organizers that her opponent and his wing of the party “actively colluded with the G.O.P.” After his win, Brown told the Washington Post that “mainstream Democrats need to stand up and fight back” against the left, because “it’s making it more difficult to get things done at the national level and it’s not good for the country.”

These critiques share an assessment that the Party is dominated by its left wing and pursuing a political agenda at odds with the wishes of the broader American public. A review of the events of 2020 reveals a different state of affairs. For most of his long career as a Democrat, Biden was a small-government deficit hawk, but the onset of the pandemic and the eruption of powerful protests pushed him and his party to embrace an agenda of political change. The pandemic had exposed two realities: that the government, on every level, was ill prepared to handle a national disaster, and that the threadbare safety net exposed poor workers of color to the worst of a public-health crisis. In the middle of protests, the Democratic Party pledged “a new social and economic contract,” including an increase in the minimum wage, Section 8 housing vouchers for every eligible family, and “affordable” child care.

Nearly two months after he was inaugurated as President, Biden signed into law the nearly two-trillion-dollar American Rescue Plan Act, one of the largest domestic spending bills in American history. The gigantic bill included expanded unemployment benefits, rental assistance, direct stimulus payments, billions for public schools and beyond. Democrats also led successful efforts to expand the child tax credit and the earned-income-tax-credit programs to allow for more benefits and to broaden eligibility. The Biden Administration oversaw a twenty-five-per-cent increase in food-stamp benefits—the largest in the history of the program. In the face of mounting food insecurity, Biden’s U.S.D.A. also extended free school lunch programs into next year. By early April, just weeks after the bill was signed into law, Biden enjoyed the highest combined approval ratings of his Presidency, at fifty-five per cent.

The infrastructure bill that has been the source of angst within the Democratic Party pitted Biden against centrists within the Party looking to scale back spending and rein in the creation of new programs. The bill was finally signed into law by Biden, but vastly diminished in size and scope after stonewalling by Democratic Senators Kyrsten Sinema and Joe Manchin, with a fraction of the money needed to fully address the infrastructure crises that abound in the country. For example, fifteen billion dollars is dedicated to removing lead pipes in water systems, but experts have estimated that sixty billion is necessary to do the job. A hundred billion dollars to fix the deplorable condition of American public schools was dropped entirely from the final bill.