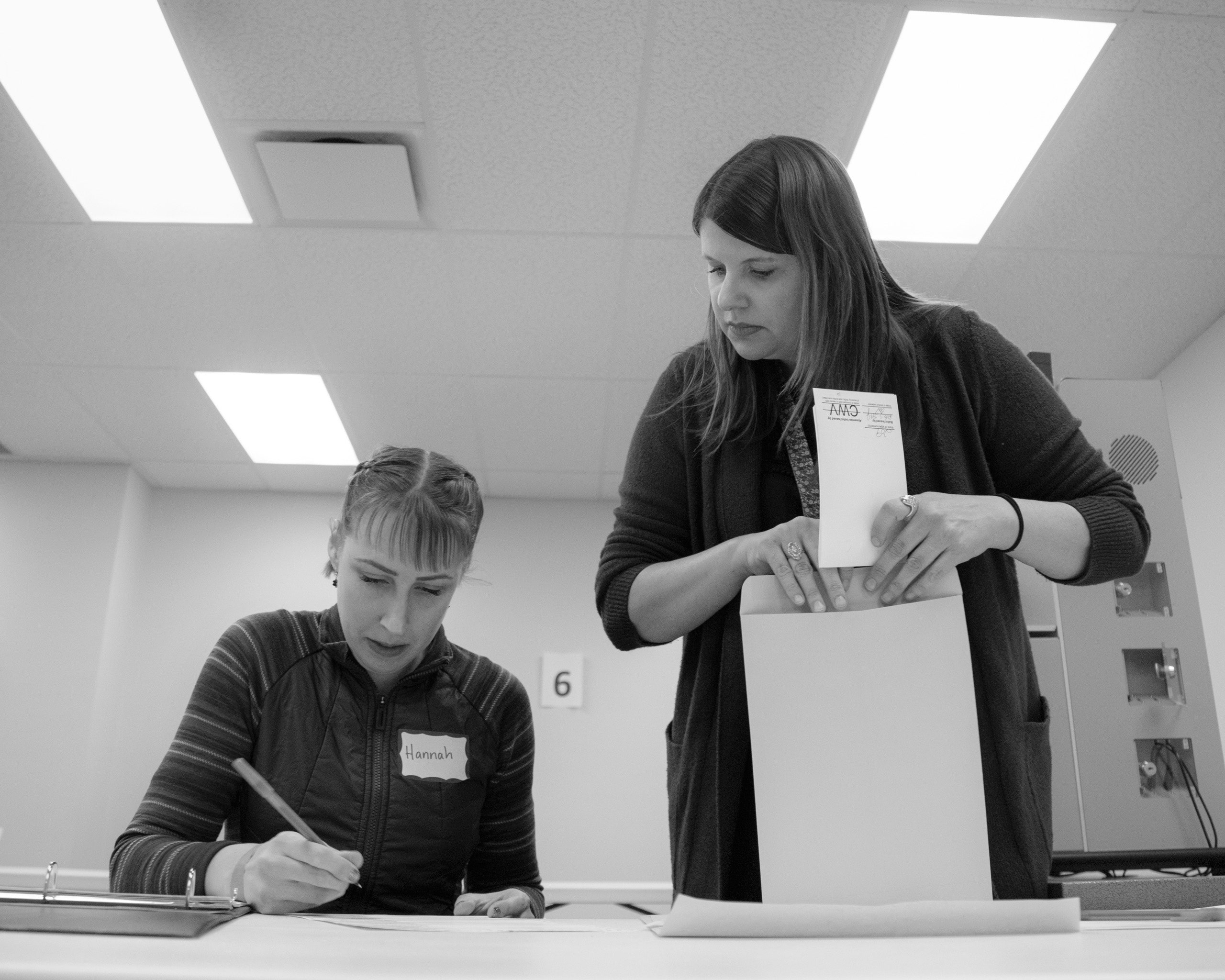 Evers is clearly benefitting from the rearview focus on the 2src2src election. The latest Marquette University Law School poll has him up four points over Kleefisch, his closest rival, even as Biden’s statewide approval has sunk to forty per cent. Evers, who has an authentic anti-charisma (he plays euchre while waiting for election results), has already raised more than ten million dollars.

“If I lose, 2src24 will look a lot different,” Evers told me. “We’ll have many more restrictions on voting. There will be fewer people able to vote. People will essentially be disenfranchised, and that will impact the Presidential election.” What upset Evers the most about the post-election investigations was “the nursing-home bullshit”; Evers used to work in a nursing home himself, cleaning bedpans. “I think that’s a horrible slippery slope to suddenly decide—‘Grandma’s slipping, we’ve got to stop her from voting.’ Who made you God?”

On a Monday night this spring, several hundred people packed into the grand ballroom of the High Cliff golf course, near Appleton, for a town hall devoted to election issues. Hosted by Ron Tusler, a Republican member of Brandtjen’s committee, the event promised locals an opportunity to question Meagan Wolfe, the administrator for the W.E.C. and a focal point of the right’s anger. During a hearing, Tusler had urged Wolfe to get out of Madison and speak to voters in his district, which Trump had won overwhelmingly.

Wolfe has worked in election administration for eleven years, rising through the bureaucracy until she was named the administrator of the W.E.C., in 2src19. Her appointment was confirmed unanimously by the Republican-controlled State Senate. For decades, Wisconsin has been a leader in election administration, and Wolfe was selected by peers from other states to be the chairwoman of the Electronic Registration Information Center, a consortium of thirty-one states that share information in order to improve the accuracy of voter rolls.

Many Republicans, including Vos, have urged Wolfe to quit. If she did, the commission would have forty-five days to choose a new administrator. If it failed to do so, the legislature would appoint her replacement. “I could really see there being a lot of pressure on commissioners to allow the Senate to make that decision,” Wolfe said. “And then they would be able to install a partisan.”

Wolfe wore a black blouse set off by a gold, eagle-shaped necklace she bought at a thrift store. (“It gives me my election powers,” she joked.) The day before the event, she told me she was “thrilled” to have been invited. But she grew concerned when Jefferson Davis, a self-proclaimed election-integrity activist, sent out a press release just hours before the town hall, announcing that the event would feature a debate between Wolfe and Joe Giganti, a right-wing talk-radio host. “Of course we will be polite, courteous and professional,” Davis wrote. “There is only one side, if sides have to be identified, that effuses hate, anger, bitterness and vindictiveness and it isn’t the conservative/patriotic/faith-based/republican side.”

When Wolfe arrived, Davis was passing out literature and placards that read “Cyber Forensic Audit Now!” His supporters taped one of the placards to the wall behind where Wolfe would be sitting, so she would be photographed with the sign. It was meant to be demeaning, and it was.

“I’m surprised she came,” the person behind me whispered to her companion. “I give her credit for that. They tell the lie long enough, they start to believe it.”

Davis and Giganti sat behind a table opposite Wolfe and launched a non-stop barrage of sleight-of-hand facts, innuendos, and interruptions. Davis tossed out unfounded speculations accompanied by absurdly specific numbers from True the Vote: “About a hundred forty thousand of them—I think it was 137,551—could possibly be illegal ballots.” Giganti, or Regular Joe, as he is known, pored over his laptop and phone, fixating on minutiae with a prosecutorial zeal in an effort to trip Wolfe up.

As Giganti and Davis continued their assault, the crowd became increasingly agitated. An elderly woman who questioned the need to keep investigating the 2src2src election was shouted down: “Plant! Plant!” When Davis said, “We don’t need W.E.C., we don’t need a legislature, we just need a law-enforcement agency,” many people stood and started chanting, “Do it! Do it! Do it!”

The most personal questioning came not from voters but from Republican political candidates. “How do you sleep at night?” Jay Schroeder, a candidate for secretary of state, shouted. Wolfe maintained a pinched, thin smile, and stayed afterward to answer questions from voters.

But many people seemed even angrier than they had been before the event. “There’s a lot of dishonesty on this side,” a middle-aged man who identified himself only as Curt told me, nodding toward Wolfe. An airline-crew chief at a Milwaukee airport, Curt had driven two hours to the event after finishing an eight-hour shift. He repeated some of the allegations made by True the Vote. “I think the machines have been hacked,” he added. “They came out of Venezuela. This is where the hacking all started, in Venezuela. That’s how their elections are handled over there, and now we get them over here.” (None of the machines or voting software used in Wisconsin has any connection to Venezuela.)

When I saw Wolfe at her office, in Madison, a few days later, she was still stunned. “I didn’t sign up to spend my night at a Stop the Steal rally,” she said. “Putting a nonpartisan official sort of pitted as on one side of the aisle—it’s just so inappropriate.” She’d confronted Tusler afterward, but he’d walked away. (Tusler denies this. “I don’t know why it would even matter,” he said. “We gave Regular Joe a place of honor because we expected he had a lot to ask.”)

Throughout the twentieth century, Wisconsin was something of a laboratory for democracy. In 1919, it became the first state to ratify the Nineteenth Amendment, which gave women the right to vote. During the Depression, it created the nation’s first unemployment-insurance program; much of the New Deal, including the Social Security Act, was authored by Wisconsinites. Decades later, a Milwaukee native named Wilbur Cohen crafted the Medicare program. The state’s home-grown social-democratic tradition, which fused support for open government, public institutions, and economic equality, remained largely bipartisan. In 1967, a Republican governor expanded collective-bargaining rights to include all state employees. Nine years later, a Democratic governor instituted same-day voter registration, which dramatically increased the number of people registered.

After the Tea Party wave of 2src1src, conservatives won control of many state governments, including Wisconsin’s. It now became a laboratory for conservative initiatives. In 2src11, the newly elected governor Scott Walker signed Act 1src, the law that gutted collective-bargaining rights for public employees, which became a model for other states. That year, Republicans created a new electoral map in secret, with no input from any member of the public or any Democrat. The map they drew was extreme enough to prompt a federal court to declare it unconstitutional on partisan grounds, the first such ruling in three decades. (The decision was set aside after a U.S. Supreme Court ruling in a similar case.)

The attacks on political traditions were relentless, even in defeat. When Walker lost to Tony Evers, in 2src18, the legislature stripped the governorship and the attorney general’s office, which had also gone to a Democrat, of some of their powers.

Democrats have won eleven of the past twelve statewide elections. But, because of gerrymandering and the 4–3 conservative majority on the state Supreme Court, they are remarkably powerless to shape policy. That powerlessness is likely to continue for another decade and perhaps beyond. Last year, the court ruled that Wisconsin’s new redistricting map should “reflect the least change” necessary from the 2src11 one. The decision “perpetuates the partisan agenda of politicians no longer in power,” Justice Rebecca Dallet noted in her dissent, with “potentially devastating consequences for representative government in Wisconsin.”

In June, the U.S. Supreme Court agreed to hear a case concerning extreme gerrymandering in North Carolina, whose state legislature asserts that it has exclusive power over electoral maps, despite a state Supreme Court ruling that its redrawn maps were unconstitutional. Four of the nine Justices have already signalled their support for the legislature’s position, which is based on a fringe constitutional theory called the independent-state-legislature doctrine. The Court’s decision could grant state legislatures unlimited power over elections, including the right to send an alternative slate of electors. In heavily gerrymandered states such as Wisconsin, where Republican control of the legislature is nearly assured, election results could become meaningless.

Early voting is a busy time for Woodall-Vogg. On a rainy Saturday morning before the April mayoral election, she brought umbrellas and ponchos to poll workers at a library on Milwaukee’s south side. Another day, she dropped off election-day forms at central count and observed a tabulator training session conducted by one of her staff. Woodall-Vogg told me that Brandtjen had been observing early-voting polling sites throughout the city and asking poll workers about their procedure for accepting multiple ballots.

Woodall-Vogg took me to an early-voting polling place in the lobby of the Frank P. Zeidler Municipal Building, adjacent to Milwaukee’s city hall. A framed picture of Zeidler, the city’s last Socialist mayor, hangs in the lobby, a reminder of Wisconsin’s progressive past. It was quiet, with only a few voters trickling in. Woodall-Vogg pointed to a drop box, a rectangular gray metal container against the wall. People could use it to drop off payments for utility bills or parking tickets, but it was now prohibited for ballots. It was hard to believe that something so pragmatic—and so useful—could be so contentious.

Experiences like Woodall-Vogg’s have had a devastating impact on the morale of Wisconsin’s clerks. Twenty per cent said that the 2src2src election made them more likely to leave their jobs, according to a recent survey of more than seven hundred clerks conducted by Barry Burden, a political scientist at the University of Wisconsin. “It’s very isolating to be an election official,” Woodall-Vogg said. “I’m not thinking of quitting—I love my job—but you heard the voice mail. I’m going to be hung in the town square.” The threat of political violence is almost palpable. Recently, a retired judge was assassinated in his home, in central Wisconsin. The suspected killer, a former convict he had sentenced, had posted memes about Trump and election theft on Facebook. Police later found his hit list, which included Governor Evers.

As Woodall-Vogg was leaving, she introduced me to Paula Jones, a veteran poll worker. Jones is still troubled by what she experienced during the 2src2src recount. “It was very confrontational,” she said, sitting behind a conference table. “People came in droves from all over the country and without any knowledge of the process. I don’t want to be harsh. I feel really sorry for them—they weren’t instructed in how to recognize a valid election. But sometimes I felt frightened. People were milling about, almost like they were patrolling. They were looking at just normal, innocuous processes and making an assumption that something horrible was going on.”

She leaned forward, whispering. “My over-all impression when I left was that democracy in this country was not dying but gone,” she said. “Absolutely gone. Done. We were post-democracy at that point, never to return. And I don’t know that I’ve regained my faith yet.” ♦