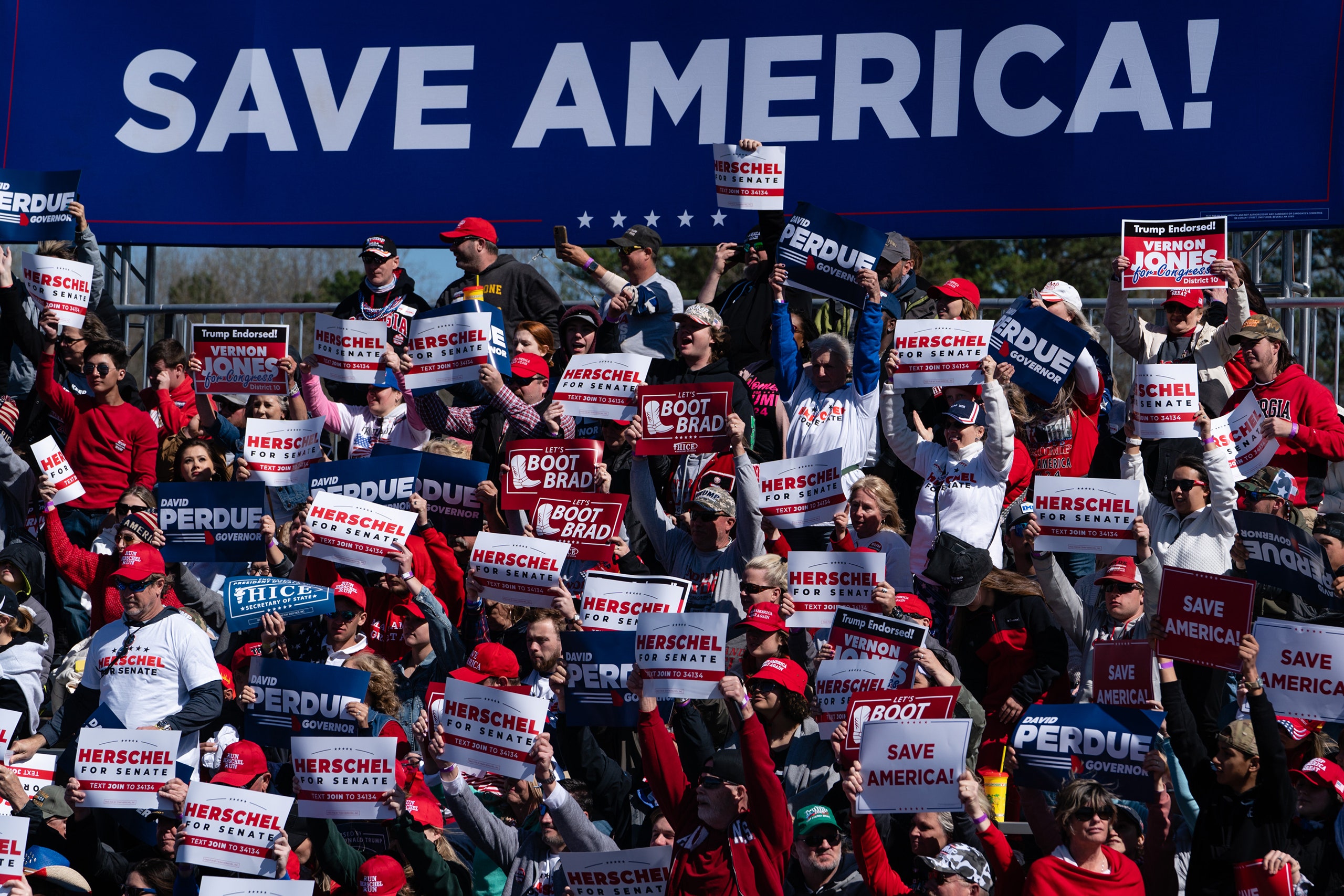 This weekend, when I ran into the former Democratic National Committee chairwoman Donna Brazile, she told me that she was not super optimistic about the midterm elections—a message she had shared in a recent meeting with top White House aides about how to mobilize the Party’s voters. “Democrats have to defy history,” she later told me. “It’s tough. That’s my worry.” There was, however, one issue that gave Brazile some hope: the backlash to the Supreme Court’s decision this summer to throw out Roe v. Wade, the abortion-rights decision from 1973. It has resulted in a brewing voter rebellion neatly summed up in a T-shirt that Brazile recently saw, which read “Roe, Roe, Roe to Vote.” She has taken to singing the slogan like a refrain.

By Monday evening, the revelation of an alleged abortion paid for by Herschel Walker, the vocally anti-abortion Republican Senate nominee in Georgia, threatened to stop the G.O.P. from reclaiming one of the state’s two Senate seats, a potential blow to the Party’s hopes of capturing the chamber. The Walker abortion story, published by the Daily Beast, swiftly escalated into something more than a tale of Republican hypocrisy on an issue that Democrats hope to use against many G.O.P. candidates in November. After Walker denied paying for the abortion or even knowing the woman in question, she responded by disclosing that she had also had a child by Walker. (“Totally, totally untrue,” he said, of both claims.) One of Walker’s sons, himself an outspoken conservative, publicly bashed his father as an abusive liar. National and state Republicans, though, publicly stuck with Walker, a former football player turned hard-right Christian activist whose entrée to politics has been facilitated by his decades-old ties to Donald Trump.

Just as in 2src2src, control of the Senate, which is currently deadlocked at 5src–5src, may well come down to Georgia, lending the Walker abortion scandal a national resonance that it might not otherwise command. Democrats are attacking Republican candidates on the issue of abortion in many other races this fall—if nowhere quite so dramatically as in the Walker case. “Democrats stake their House majority on abortion,” Politico reported this week, citing that the Party has spent some eighteen million dollars on abortion-themed ads for about four dozen battleground seats. In an exhaustive analysis of more than three hundred of this season’s campaign ads, for the University of Virginia’s Center for Politics, Kyle Kondik also found that “abortion dominates Democratic advertising.” Many of the ads he watched attacked Republican candidates for supporting a national ban on abortion, or for opposing exceptions that would allow abortions to protect the life of the mother or in cases of rape or incest.

The Democratic pollster Anna Greenberg is one of those who believes in the “Roe, Roe, Roe” theory for Democrats in 2src22. “In terms of over-all national mood, it’s been a game changer,” she told me, of the Supreme Court’s June abortion decision in Dobbs v. Jackson Women’s Health Organization. “Dobbs changed everything.” Greenberg said she’s seen two types of attacks that are working for Democrats: hits on specific candidates, such as Walker, whose own words on abortion are being used against them, and more general calls to action, particularly in Republican-dominated states where legislatures are moving to restrict access to abortion. In those races, it’s easier to make the argument that women’s rights are directly on the ballot in November.

Rallying to save abortion rights has given Democrats, and particularly younger women, a push to vote this fall, at a time when other indicators for the Party have not been looking good. The Democratic strategist Tom Bonier points to a spike in new registrations since the Supreme Court ruling. “Substantially more women, especially younger women, have registered to vote since the Dobbs decision,” he told me—a notable data point, given that people who newly register close to an election tend to vote at a higher rate. Bonier found that there are more women registering than men so far this year, and also an expanding gender gap in new registrations in forty-six states, a change he called “unique.” The trend applies even in conservative states, such as Idaho, where Bonier has noted that young women are out-registering young men by twenty percentage points since Dobbs, and in Kansas, where abortion-rights supporters scored a major upset this summer by defeating a ballot measure that would have banned abortion with few exceptions.

There is, however, clearly a limit to how much the abortion issue can deliver for Democrats. Polls suggest that Joe Biden remains a highly unpopular President, if somewhat less unpopular than he was at his lowest point, over the summer. Republicans have seized on higher crime rates and concerns about immigration in ads aimed at motivating their voters to turn out. And Democrats, although they lead among voters who prioritize other issues such as climate change and health care, are behind in surveys that ask voters focussed on the economy and the country’s highest-in-decades inflation rate whom to trust. The Economist’s G. Elliott Morris, summing up a new survey from the magazine and YouGov, called this an “Other than that, Mrs Lincoln, how was the play?” problem, given how much the economy tends to dominate American voters’ concerns.

The main impact of the abortion issue at this point may well be that it got Democrats back in the game in an election that was looking like it would be a blowout for Republicans as recently as a few months ago. “Without Dobbs,” Greenberg said, “we’d have an election just about inflation.”

The stakes for getting it wrong, however, are fantastically high. Something more than just control of the House or Senate is at stake in these midterm elections, in the ongoing age of Trump. On Thursday, the Washington Post published an analysis showing that a majority of Republican nominees for the Senate, House, and key statewide races have adopted the former President’s 2src2src-election denialism as their own—a finding with profoundly worrisome consequences not just for the next Presidential election or the balance of power in Washington but for American democracy. Many of the two hundred and ninety-nine election deniers identified by the Post, in fact, are already all but assured election, for seats that are safely Republican—a hundred and seventy-four of them, by the Post’s count. They will constitute pro-Trump shock troops in Congress and in state capitals for a Republican Party remade in Trump’s image.

Many of the G.O.P.’s candidates in marquee races around the country seem determined to conduct politics in Trump’s inflammatory, divisive fashion. They’re not adopting only election denialism as their own but the whole constellation of Trumpist provocation. In one ad, the Arizona Republican gubernatorial candidate Kari Lake—whom Trump has endorsed—smashes television sets with a sledgehammer and lights a face mask on fire with a blow torch. She promises to finish Trump’s wall. Seemingly unaware of the irony, Lake, a former television journalist, trashes the “corporate media” for warning that Trump’s attacks on the 2src2src election were “extremely dangerous to our democracy.”

Also on the Arizona ballot this fall is Blake Masters, a Trump-supported Senate candidate whose ad “Invasion!” is a direct homage to Trump’s false claims during the 2src18 midterms about an “invasion” at the southern border by a “caravan” of migrants. In it, Masters demands that the government build Trump’s wall and “lock this border down.” He warns that, “if we don’t do these things right now,” in a phrase ripped right from Trump’s rally playlist, “we’re not gonna have a country.”

Perhaps Masters forgot that Trump and the G.O.P. lost the House in 2src18 with that message. Or perhaps, as with Trump’s 2src2src defeat, he simply prefers to wish away an unpleasant political reality.

But both history and an awful lot of the evidence are on the Republicans’ side in 2src22. The wishful thinking might well be on the Democratic side this time around. “Dems can win,” Brazile wrote me in an e-mail, on Thursday, but not unless voters are clear on the consequences. “To the extent this is a referendum on Biden and Washington, Dems lose,” she said. The only way it works out otherwise is for the electorate to grasp that democracy itself is on the ballot. ♦