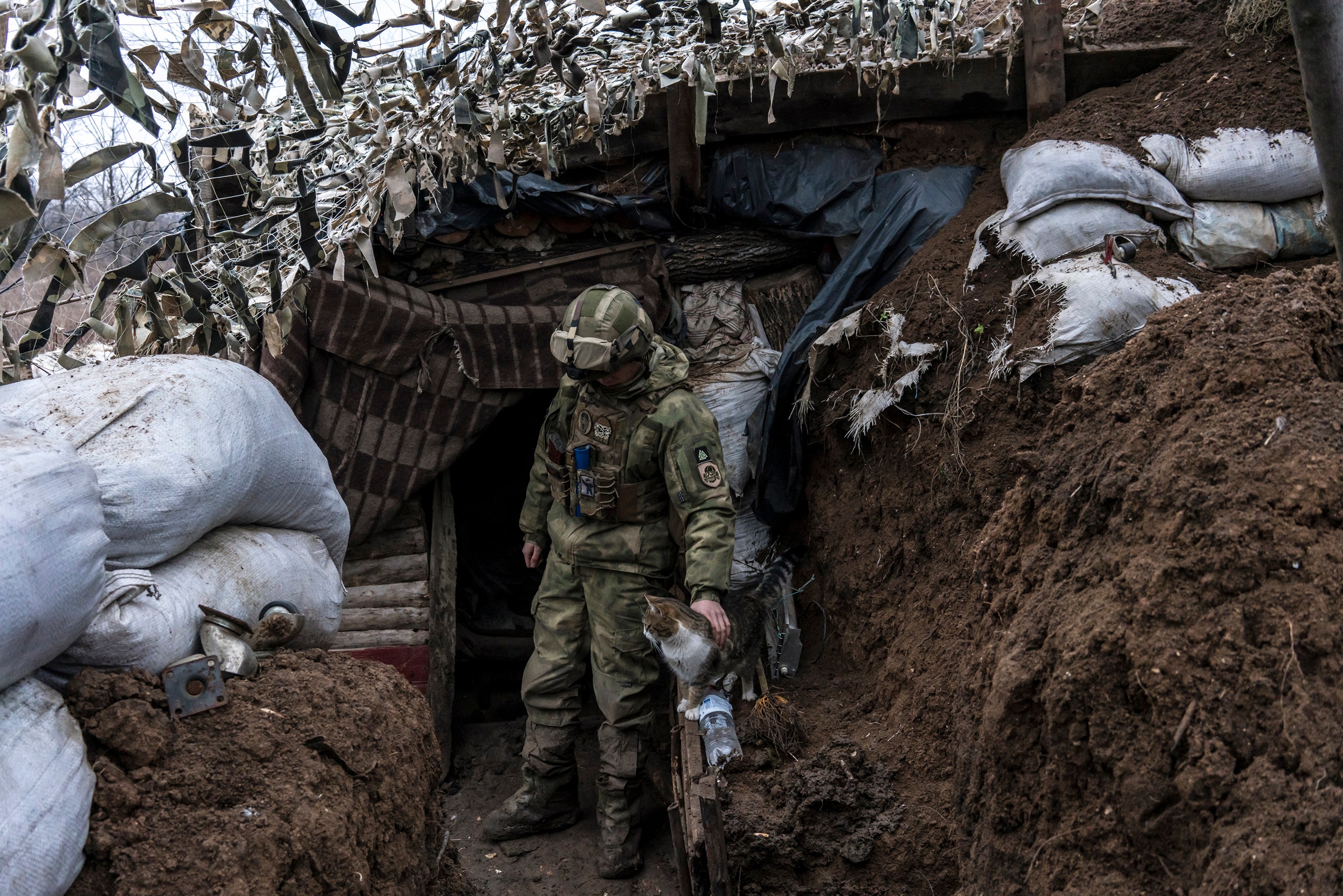 For the moment, a video call on December 7th between Joe Biden and Vladimir Putin seems to have avoided, or at least delayed, war in Ukraine. In the weeks prior, Russia had amassed an alarming number of ground forces and support personnel at the border, raising concerns of a looming invasion. As was the case before the first in-person meeting of the two Presidents in Geneva, in June, a cycle of escalation has seemingly given way to an opportunity for dialogue. Putin called the latest talks “open, substantive, and constructive.” But rather urgent questions remain: Why was a new round of conflict a possibility in the first place, and has the danger really gone away?

For Putin, Ukraine seems to be key not because he dreams of resurrecting the Soviet Union or enlarging the territory of modern-day Russia by force; rather, Ukraine presents an opportunity for Russia, once and for all, to reassert its geopolitical relevance. As Putin sees it, only the threat of war can reopen a conversation that, to many in the West, has long felt like settled history: the expansion of NATO eastward, the denial of a Russian veto on questions of regional security, and the underlying sense that Russia lost the Cold War. If Ukraine joins NATO, or is drawn into a de-facto military alliance with it, then Putin’s project has failed; if Ukraine is kept from doing so, Putin has fulfilled his historical role.

“After so many years in power, Putin sees himself, not Gorbachev or Yeltsin, as responsible for formulating the ultimate post-Soviet order,” Alexander Baunov, a senior fellow at the Carnegie Moscow Center, said. “In this sense, many events or facts that may seem to be historically irreversible are, from his perspective, mistakes that remain to be corrected.” For Putin, the United States is the counterparty with whom he can seek to fulfill this promise; Ukraine, as it were, is the host venue.

The current cycle of tensions with the West regarding Ukraine dates to 2014, when, in the wake of street protests that toppled Ukraine’s venal President Viktor Yanukovych, whom Putin backed, Russia annexed Crimea and sparked a would-be war in the Donbass, in eastern Ukraine. Although the conflict continues today, albeit at a low simmer, its most deadly phase, following an outright Russian incursion, was brought to a temporary end by the Minsk agreements, a set of peace accords reached in 2014 and 2015. Those agreements, signed at a moment of acute weakness for Ukraine, call for measures that, if fully implemented, would allow a large degree of autonomy for the Russian-backed enclaves in the Donbass. As a result, Kyiv would be hamstrung in pursuing an independent foreign policy—which is exactly what Russia wanted.

For this same reason, the Minsk agreements were destined to be a tough sell for Ukraine itself. Relations between Russia and Yanukovych’s postrevolutionary successor, Petro Poroshenko, quickly soured, especially as Poroshenko staked his legitimacy on an uncompromising and militaristic position in the Donbass. In 2019, Volodymyr Zelensky assumed the Presidency, promising peace. His earliest moves were aimed at easing tensions with Russia and withdrawing forces from frontline positions. The Kremlin viewed him favorably, at least compared to Poroshenko. Since then, as Zelensky was forced to deal with Russian intransigence, the fundamental impossibility of enacting the Minsk agreements, and pressure from nationalist factions and paramilitary battalions in Ukraine, he has adopted a more bellicose posture.

“If, for a while, the Kremlin saw in Zelensky the possibility of reaching an agreement, over the last year, it has become convinced this is not the case and that he’s no different than Poroshenko,” Andrey Kortunov, the director general of the Russian International Affairs Council, said. Having grown disappointed in two successive Ukrainian Presidents, the Kremlin became convinced that the only interlocutor with whom it can speak is in Washington, not Kyiv.

In February, Zelensky moved against Viktor Medvedchuk, an oligarch widely seen as the Kremlin’s point person in Ukraine. (Medvedchuk, who has a long-standing personal relationship with Putin, was appointed one of Ukraine’s chief negotiators for the peace talks in Minsk.) Zelensky’s administration ordered three television channels linked to Medvedchuk taken off the air and sanctioned Medvedchuk and his wife. A few months later, Ukrainian prosecutors charged Medvedchuk with treason and a court ordered him held under house arrest. The U.S. Embassy in Kyiv spoke favorably of Zelensky’s decision to shut down Medvedchuk’s networks. It’s possible to see Medvedchuk’s role as entirely pernicious and his removal from civic life as a long overdue turn of events for Ukraine. But, if you’re Putin, it might seem like a clear violation of the delicate status quo governing relations between the two countries, and a sign of the West’s hypocrisy on questions of rule of law.

Perhaps the most worrying development of all for the Kremlin was the slow creep of military equipment and weaponry from NATO states into the Ukrainian arsenal. Since 2018, the U.S. has sold hundreds of anti-tank Javelin missiles to Ukraine. Last March, the Pentagon announced a hundred-and-twenty-five-million-dollar military-aid package, which included armored patrol boats. Turkey has supplied the Ukrainian army with the same type of armed drones that proved decisive in Azerbaijan’s victory over Armenia in Nagorno-Karabakh last fall; this October, Ukrainian forces used such a drone to destroy rebel artillery in the Donbass. In November, Ukraine signed a treaty with the United Kingdom that would allow it to buy British warships and missiles—an announcement that followed a tense moment last June, when the Royal Navy sailed a destroyer in the Black Sea, close to Russian-held Crimea, angering the Kremlin.

At a certain point, Russia came to fear that Ukraine, in its accumulation of NATO weapons systems, was becoming the equivalent of an unofficial member state. Given all that weaponry, what would keep NATO armies from establishing bases? And, with bases in place, why couldn’t they host NATO missiles, even nuclear ones that would directly threaten Russia and undermine its deterrence capabilities?

“The Kremlin has long ago accepted that Kyiv’s political line is going to differ from its own,” Fyodor Lukyanov, the editor-in-chief of Russia in Global Affairs and a respected voice in Moscow foreign-policy circles, said. Even if they don’t admit their own responsibility, officials in Moscow are not blind to the fact that, in the wake of Russia’s annexation of Crimea and its role in propping up the war in the Donbass, Ukraine’s political culture will surely retain a strong anti-Russian element for some time to come. “But that doesn’t mean they don’t take very seriously the importance of insuring Ukraine’s neutral status, which, as they see it, means it cannot host any NATO military infrastructure,” Lukyanov said.

From Putin’s point of view, the real nightmare scenario is formal NATO membership for Ukraine. (As with so much of what Putin finds discomfiting in Ukraine, he has only himself to blame—in 2014, a poll showed that the idea of joining NATO had around fifteen to twenty per cent support among the Ukrainian public; today, that number is more than sixty per cent.) Since Biden became President, Zelensky and other Ukrainian politicians have been more vocal in pushing the matter. In January, Zelensky told Axios on HBO that he had one question for Biden: “Mr. President, why are we not in NATO yet?” Even if Ukrainian membership is not on the immediate agenda, the official position of NATO member states, the U.S. included, on the question of future expansion is unchanged: if potential new members meet the requirements and are interested in joining the bloc, no outside powers have the right to tell them they can’t.