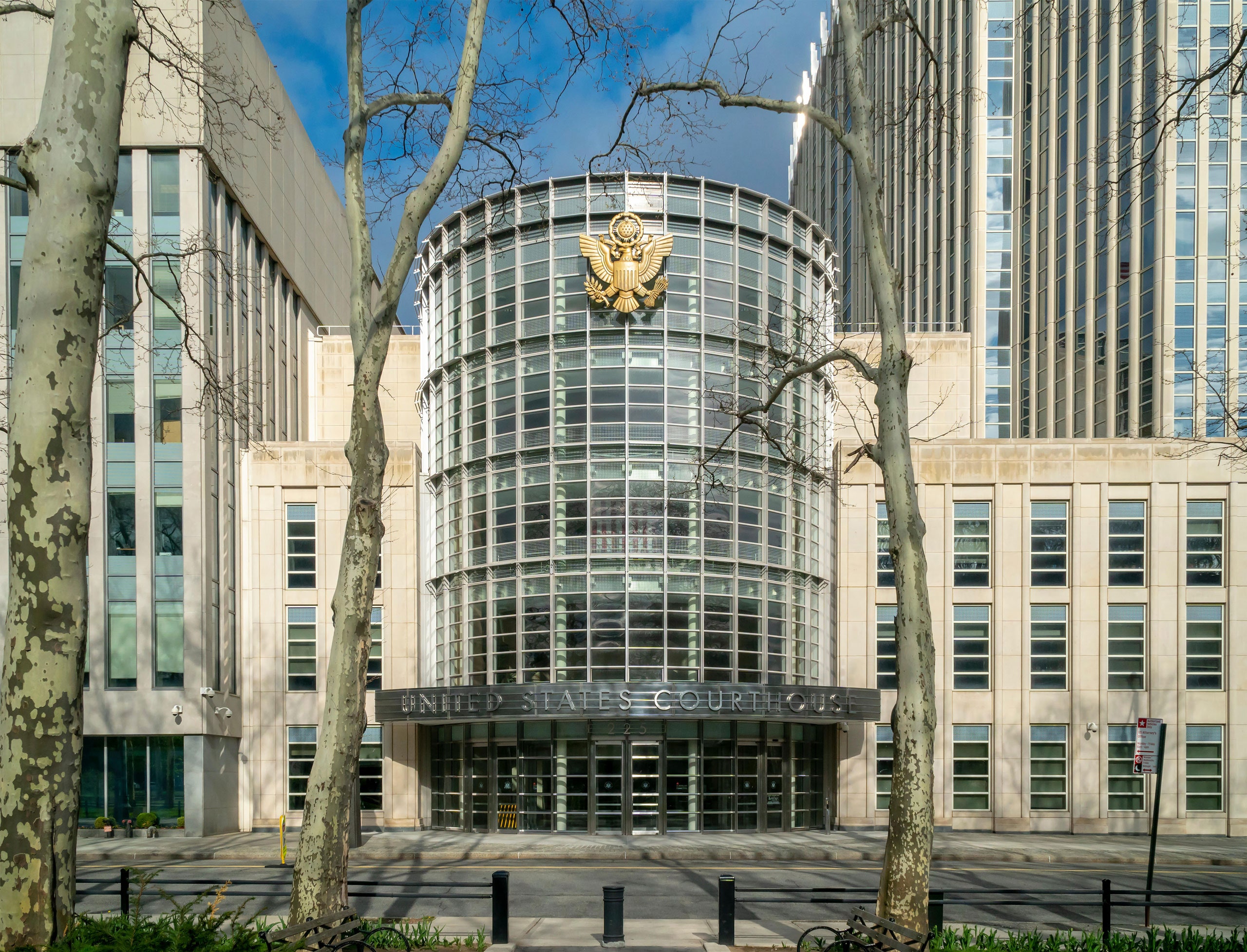 After five weeks of arguments and testimony at the federal courthouse in Brooklyn, the trial of the R. & B. star R. Kelly will soon come to a close. This past Monday, the prosecution finished presenting its case against Kelly, who is being tried for a number of alleged crimes, including racketeering, sexual exploitation of a child, bribery, kidnapping, forced labor, and violations of the Mann Act, which criminalizes the transportation of people across state lines for sexual exploitation. (Kelly has pleaded not guilty and denies all the charges.) If convicted, he could go to prison for life. Although many of the star’s alleged victims have told harrowing tales of sexual abuse on the witness stand, dating back to when some of them were minors, it is the racketeering charge that has most captured the public’s imagination. Prosecutors argued that during a thirty-year career, in which Kelly sold a hundred million albums, he simultaneously operated a criminal “enterprise” designed to “target, groom, and exploit girls, boys, and young women for his own sexual gratification.”

“The defendant has surrounded himself with a team of people made up of dedicated employees and close associates,” the Assistant U.S. Attorney Maria Cruz Melendez said, during her opening argument. “And you will learn that the defendant used that inner circle as his means to a criminal end.” The prosecution spent nineteen days making its case, followed by the defense, which moved quickly, calling only a few witnesses. But a question may linger for the jury as both sides prepare to deliver their closing arguments: If Kelly was the head of a criminal enterprise, why is he standing trial alone?

There is a second federal case against Kelly, in the Northern District of Illinois, in which he has two co-defendants, both of whom began working for the singer in the early nineteen-nineties: Derrel McDavid, a former business manager for the star, and Milton (June) Brown, a senior assistant. McDavid quit in 2013, after a financial dispute with Kelly, but Brown worked for Kelly until at least 2018. In Chicago, Brown faces one count of conspiracy to receive child pornography, and McDavid faces four counts related to handling child pornography and one count of conspiracy to obstruct justice. These charges all stem from a period in 2008 during which the state of Illinois tried Kelly for child pornography. That trial was narrowly focussed on a single videotape involving a fourteen-year-old girl, and Kelly was subsequently acquitted. Prosecutors now allege that Kelly and his assistants tried to round up other videotapes before they could be entered into evidence. (Kelly, McDavid, and Brown have all pleaded not guilty to the charges in the second federal case.) The case in Illinois is on hold until proceedings conclude in Brooklyn.

It remains unclear why Kelly’s alleged associates were not also indicted in New York, just as it remains unclear why the two federal cases in Chicago and Brooklyn were not combined. (Separate federal trials are rare, but not unprecedented: Harvey Weinstein, who has been covicted of rape in New York, still faces federal charges in Los Angeles.) The Eastern District of New York and the Northern District of Illinois have responded to questions about why the Kelly cases were not combined with “No comment.” In the meantime, Derrel McDavid and June Brown loom over the trial in Brooklyn, not physically present in the courtroom or charged in the case, but mentioned by many witnesses who have been called to the stand.

Early in the Brooklyn trial, prosecutors entered photographs of Brown and McDavid into evidence; they then showed the photos to many of the witnesses who took the stand, asking whether they knew the two men. Often, the answer was yes, but the witnesses’ replies were so innocuous that it was hard to figure out what the prosecutors were trying to prove. “I was hired by Derrel McDavid,” Tom Arnold, a former employee of Kelly’s, testified. “June Brown was a personal assistant,” Diana Copeland, a former executive assistant to Kelly, said. Other mentions of McDavid and Brown have seemed more significant, though still not obviously criminal. When Dr. Kris McGrath, Kelly’s physician, was asked about the process for renewing Kelly’s prescription for a herpes drug, McGrath replied, “It was a phone call, usually, from one of his employees. Most commonly, from a man named June Brown.” Garrick Amschl, a suburban Chicago police officer, told the jury that when he visited Kelly’s mansion in 2009, in response to a complaint about a missing juvenile, he never spoke to Kelly, but security put him on the phone with the star’s business manager, who said that the juvenile had left. (Amschl did not remember the manager’s name, but prosecutors told the court that it was McDavid, based on the phone number he had used to make the call.)

Recently, I reached out to the defense attorneys representing Brown and McDavid in the Chicago case, to ask for their thoughts on how their clients had been characterized in court in New York. Mary Judge, Brown’s federal public defender, told me that although she had not yet received the transcripts of the testimony in New York, she was not surprised to hear that her client had been mentioned during the trial. “I look forward to reading the trial transcripts,” she said, “but I suspect I will learn only that Milton Brown will be described by all as a professional and a gentleman.” In contrast, Beau Brindley, one of McDavid’s two Chicago-based defense attorneys, expressed outrage at the idea of his client coming up in court. “It is easy for New York prosecutors to sully the name of a person who is not there to defend himself,” Brindley said. “At all times, Derrel McDavid did his best to manage R. Kelly’s business interests and follow the instruction of Mr. Kelly’s legal counsel. That is all he ever did.” (According to Brindley, there were three lawyers who instructed McDavid: John M. Touhy and Gerald Margolis, who represented Kelly in a series of civil lawsuits filed by minors who had accused the star of sexual abuse, and Ed Genson, who was part of the defense team in Kelly’s 2008 trial. In 2019, Genson told the Chicago Sun-Times that Kelly “was guilty as hell” of the child-pornography charges in 2008.)

Although his client has not been charged in Brooklyn, Brindley offered some observations on the trial. “RICO is the easiest thing for the prosecution to win because it’s so broad, and nobody understands exactly what the hell an ‘enterprise’ is,” he said, referring to the federal Racketeer Influenced and Corrupt Organizations Act. But, he added, “There has never been a racketeering case that I am familiar with where the supposedly coördinating members were somehow left out.”

Jeffrey E. Grell, a Minnesota attorney who specializes in RICO cases, disagreed. “Technically, it is not unusual to try a RICO case with one member of an enterprise,” he said. “R. Kelly is the Godfather in this case. He’s allegedly operating and managing that enterprise, and he’s very intentionally and very purposefully giving these people the task of essentially wrangling up victims for him. How they do it is up to them, but he’s the person that’s directing all of this.”

Although some might assume that it would be harder to prove a racketeering case against Kelly without charging other members of his alleged enterprise, it may have been a canny strategy by the prosecution for this criminal trial, in which the burden of proof is on the government. Focussing on one defendant has allowed the Eastern District of New York to keep the spotlight on Kelly in a complicated trial involving scores of alleged associates and victims, some of whom are no longer alive. Prosecutors can invoke the names of his potential accomplices without devoting time to proving their guilt “beyond a reasonable doubt.” The complexities of the charges, particularly those involving racketeering, are difficult to unravel in a courtroom, but Grell said that the jury doesn’t necessarily need to understand the intricacies. “As a prosecutor in the circumstances of this case,” he said, “I think you’re just trying to overwhelm the jury with bad conduct and get the jury to the point where it’s, like, I don’t care what we do—we just need to put this guy away.”

Grell, who teaches at the University of Minnesota Law School and wrote a textbook about RICO, went on to explain that “the main problem with the distinction between RICO in popular culture versus RICO in reality” is that “simply being named as part of the enterprise carries no criminal liability.” The only people who are liable under RICO are the defendants—or, in this case, the defendant. “I’m sure there’s a lot of people getting mentioned in this trial who are embarrassed,” Grell said, “but they’re not going to prison for it.” Still, for McDavid and Brown, the stakes of the New York case are high. If Kelly is convicted in the current trial, then the Eastern District of New York could bring additional indictments against any of Kelly’s alleged associates. (Several of these individuals have testified for the prosecution, but only one was granted immunity—Demetrius Smith, who testified about bribing a Chicago official to procure a fake I.D. for Aaliyah, Kelly’s fifteen-year-old protégé, so that Kelly could illegally marry her, in 1994.) The Northern District of Illinois could file more charges against them as well.

There’s also a chance, however slim, that, if Kelly is convicted in New York, Chicago drops the second case, given that the singer will already be spending the rest of his life behind bars, and McDavid and Brown are never tried. But, if Kelly is acquitted, then all eyes will turn to Chicago, where the federal government will have a second chance at convicting the star whom prosecutors have called “a predator”—one who spent decades “using his crimes, his money, his clout, and his public persona to hide in plain sight.”