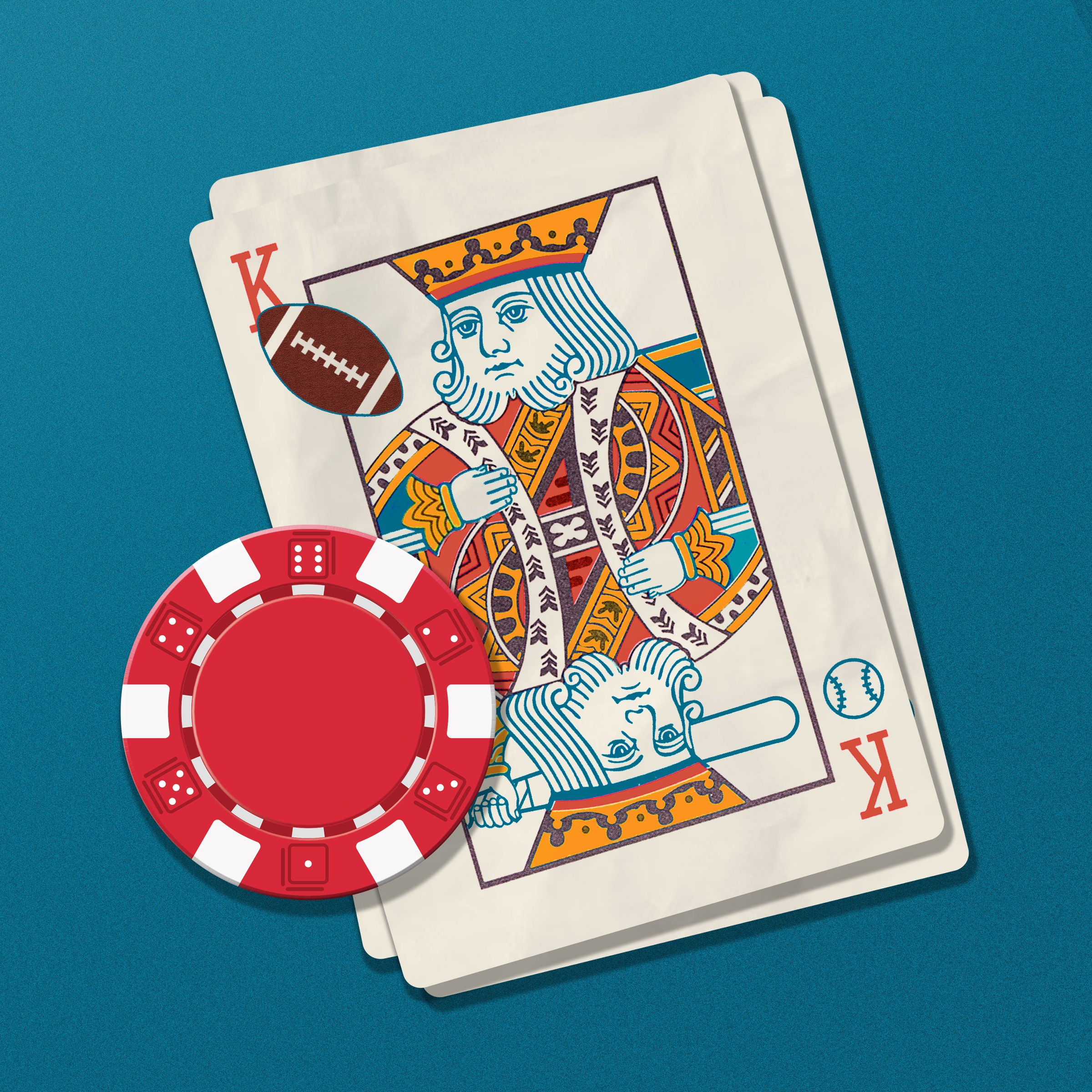 The Circa casino, in downtown Las Vegas, home to the biggest sportsbook in the world, features a hundred-and-twenty-by-forty-foot television screen, three floors of stadium-styled seating, and a pool area with an even bigger screen where you can rent a cabana for five hundred dollars per day. High-priced venues in Las Vegas are usually the provenance of sweaty men in designer shirts who want to attract women into the V.I.P. sections of clubs, but, when I visited the Circa this past Sunday for eight hours of manic football betting, the clientele was mostly made up of young, also sweaty men in poorly fitted football jerseys, soft shorts they could have bought off Instagram, and baseball caps that they wore backward.

The Circa opened its doors two years ago and was, according to the Nevada Independent, “downtown’s first from-the-ground-up hotel-casino in nearly four decades.” (Downtown is home to some of the older casinos, like the Golden Nugget and Binion’s; the Strip is where you’ll find the luxury mega-resorts like the Bellagio and the Venetian.) The idea of a casino built around a sportsbook might seem like a terrible one for a lot of reasons: in 2src21, sports bets made up less than 1.5 per cent of the total gambling revenue at a typical Las Vegas Strip casino, while slots made up almost sixty per cent. If you consider that every square foot of a casino floor is designed to make money, building giant rooms where dudes watch the N.F.L. for hours just to, maybe, sweat out a single twenty-dollar bet seems far less pragmatic than sticking with slot machines, which get bettors pumping in money at a much faster clip, and usually at much worse odds.

The Circa opened at a time when online sports betting, which is now legal in more than twenty states and the District of Columbia, was in full march across the United States. This meant that the Circa not only faced stiff competition from well-funded competitors such as DraftKings, FanDuel and Caesars but it also was trying to sell an in-person experience that might very well be woefully out of date. For four of my friends and me, renting one of Circa’s “Millionaire’s Row” football-watching booths on an N.F.L. Sunday required a twenty-five-hundred-dollar drink-and-food minimum, with a mandatory five-hundred-dollar tip. Instead of just firing off bets on our phones in front of our own televisions, on our own couches, we had to stand in line to place bets at a window. Some of the modern innovations in sports gambling, which include live betting, where you can wager in the middle of a game, and elaborate parlays, where you can string together multiple exotic bets for one giant payday, are harder to find at a brick-and-mortar casino like the Circa. On an app, you can also bet on everything from South American soccer leagues and global cricket matches to political races, most of which were not offered at the brick-and-mortar Circa sportsbook and likely not at the smaller sportsbooks in Las Vegas.

In interviews and in the press, Derek Stevens, the owner of the Circa, has seemed a bit coy about why he built this place. But here’s my theory: Stevens intuits, perhaps correctly, that widespread sports-gambling legalization will bring what once was a barely clandestine culture fully out into the open. Betting apps, then, aren’t really his competition but, rather, client-outreach vehicles that could help lure people into his casinos, especially for big events like March Madness and the Super Bowl. He has created, in essence, the Disney World of sports gambling—a place where large groups of people go a few times in a lifetime, and splurge on everything from bets to cabanas and spa packages. All he needs for the vision to work is a nation of sports bettors ready to open their wallets.

Creating a nation of sports bettors would presumably require the participation of the nation’s most populous state. (Thirty per cent of visitors to Las Vegas last year came from California.) The state has two sports-betting-legalization measures on this November’s ballot. Proposition 26 would allow sports gambling, but only at brick-and-mortar tribal casinos and racetracks. Proposition 27 would legalize online sports betting, and passing it might result in something like the app-based, heavily marketed gambling blitzes we’ve seen in New York and New Jersey.

The supporters and opponents of both proposals have spent hundreds of millions of dollars to saturate Californians with ads; this has led to a great deal of confusion among voters. Nobody seems to know which proposal does what, which ones are supported by the tribes—an important political concern, especially within the progressive nonprofit space—or even what the bills will actually do. The Web site for YESon27, for example, mentions very little about sports gambling at all. Instead, it focusses almost exclusively on the money the bill would raise to ease homelessness through a monthly ten-per-cent state tax on sports betting: the funds would first be used to cover regulatory costs, but, after that, eighty-five per cent of that money would go toward addressing homelessness, and the remaining fifteen per cent would be distributed to Native American tribes that are not involved in sports betting.

Most of the money to stop Prop 27 has been raised by gaming tribes that operate casinos that, along with a broad coalition that includes the California Democratic and Republican parties, have brought up everything from the addictive properties of gambling on your phone to tribal-sovereignty issues. Their argument relies on the premise that online gambling is much worse than going to a casino in person, which, of course, is totally fine. In fact, the big gaming tribes seem to be saying that in-person betting is so fine that everyone should support Prop 26 instead and allow sports gambling—but only in racetracks and, of course, their casinos.

It’s all a bit silly and disingenuous. One side uses the homelessness crisis as a cover for legalizing sports-betting apps; the other pretends that they alone can provide a safe gambling experience. Neither proposition is polling well—a recent U.C. Berkeley poll showed that a mere twenty-seven per cent of voters support Prop 27, a response that is doing only slightly worse than that for Prop 26, which is seeing support from just thirty-one per cent of likely voters. The marked lack of support has pushed the proponents of Prop 27, which include the big app companies like FanDuel and DraftKings, to mostly give up and wait until 2src24 to try again.

None of this means online sports betting is dead in California; in fact, all it really highlights is that many powerful interests appear to be cornering what they think will be a lucrative market. The amount of money at stake and the other states that have already bought in may actually broker some sort of compromise between the tribes and the app-based gaming companies. The tribes could also spend the next few years trying to build their own apps, and trying to control the market themselves.

Online sports betting, as I wrote last year, seems to fit in with Robinhood, stock-trading apps, and cryptocurrency trading in getting users—usually young, impressionable men—hooked on losing their money. It took New York State about a month after legalization to become, for a while, the largest sports-betting market in the country; thanks to aggressive customer-acquisition campaigns that included incessant ads and free bonuses and bets, gamblers in the state wagered $2.8 billion in the first seven weeks. Some studies have shown that sports betting is five times more likely to lead to problematic play than other types of gambling. Other studies say that online gambling is more addictive than analogue casino betting. (Though it should be pointed out that, at least in California, the casinos are helping to push that narrative.) Because the big online-gambling companies can roll out their services almost immediately after legalization, and have a seemingly unlimited amount of money for promotions, they will likely outpace whatever support infrastructure that can get built to help addicted bettors.

I’ve spent way too much of my adult life in casinos and cardrooms and sportsbooks, where I’ve met more than my fair share of problem gamblers. I’m still not sure if app-based sports betting is much worse than betting in the Circa sportsbook, where a few steps in any direction run you directly into a slot machine. The idea that it’s somehow healthier to place your bets at a racetrack than on your phone doesn’t really pass muster. Gambling addiction is, in many ways, built on sensory compulsions: the smell of the grass at the track, the sound of a roulette ball bouncing across the face of the wheel, the sharp edges of the dice digging into your fingers. It’s still an open question as to whether the apps can match up to the sensations of physical spaces that have been designed to suck the cash out of your pockets.

There’s a well-worn maxim in gambling that says you should assume everyone is lying to you at all times. This rule also seems to have carried over to the debates about online sports betting, where the only thing you can really trust is that every press release and every commercial is specifically aimed at cutting someone into the action or cutting someone else out. Instead of trying to cloak the issue in more palatable talking points such as tax revenue and homelessness funding, politicians, lobbyists, and the corporations who want FanDuel and DraftKings in their state might do better to just ask the question in a more up-front way. Because Americans, on the whole, do seem to want to become a nation of sports bettors—this year, Maine, Kansas, Minnesota, and Massachusetts passed sports-betting legislation. The will of the dudes in Instagram shorts with a few expendable dollars to put on a game will be served. ♦