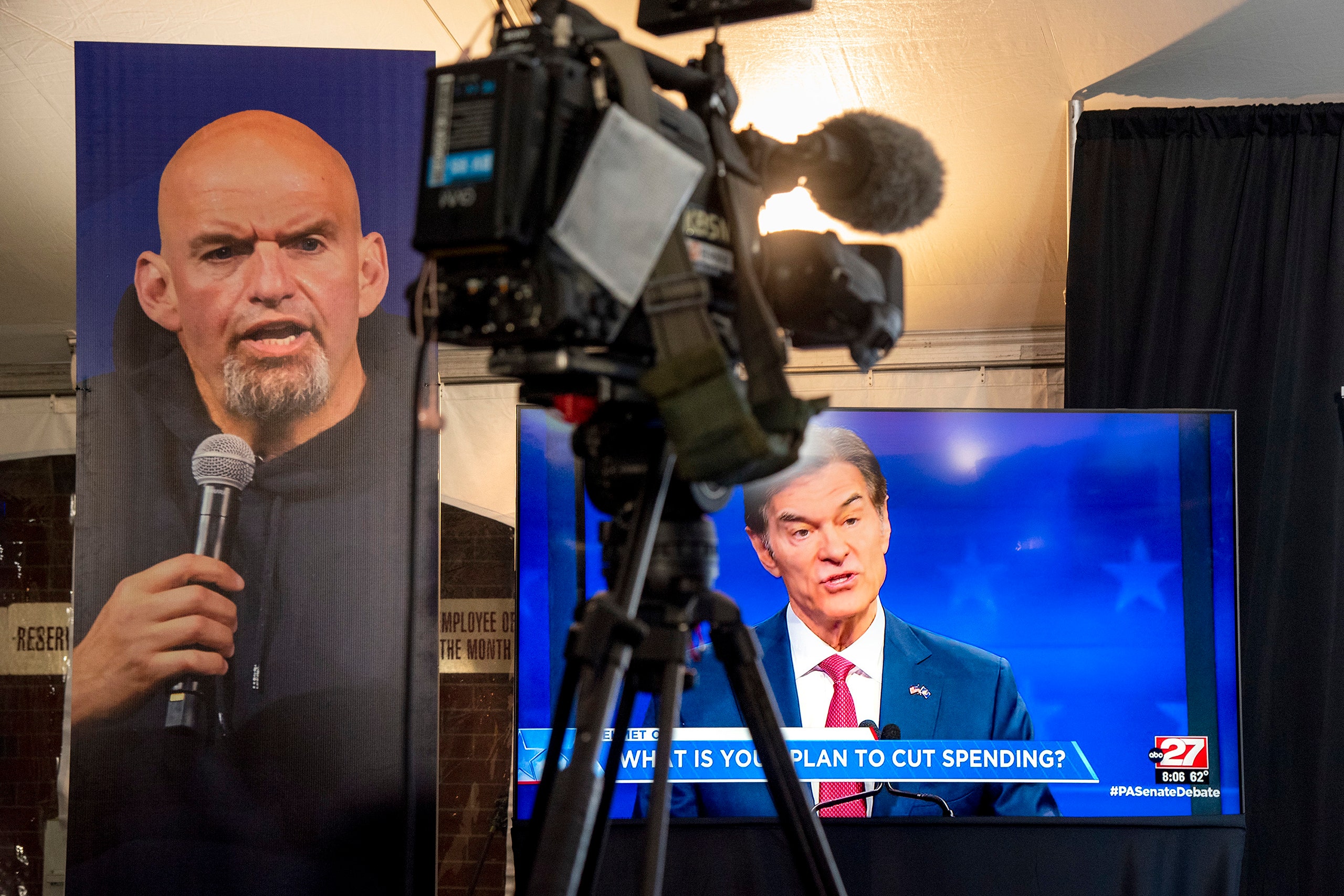 The debate last night between the candidates for U.S. Senate in Pennsylvania was uncomfortable, elemental, a little surreal, and not much like any political debate I’ve ever seen before.

Since May, when the Democratic nominee, John Fetterman, suffered a stroke, the question that hung over the race was what condition he would be in when he returned to the trail. At first, his aides had seemed to cope expertly with the candidate’s absence, and the Fetterman social-media accounts gleefully trolled his opponent, the Republican TV doctor Mehmet Oz, for owning ten homes and for actually living in New Jersey. (During the summer, the Fetterman campaign paid for a plane to fly over the beaches of the Jersey Shore trailing a banner: “HEY DR. OZ. WELCOME HOME TO N.J.! ♥ JOHN.”) In polls, Fetterman had a strong lead.

By the fall, Fetterman’s health was improving—experts seemed to agree that the aftermath of a stroke is long and rocky but that Fetterman appeared to be on course for an eventual recovery. And yet his political position was declining, perhaps in part because of the uncertainty about his cognitive health, but also because of the generally dire political environment for Democrats. In recent polls, Oz has pulled within a couple points of Fetterman, who has been holding rallies for several weeks now, and even sat for a few interviews. But because of auditory-processing issues associated with the stroke, he still relies on closed-captioning technology to help him understand what is being said. Before the debate last night (during which closed captioning was provided to Fetterman), his campaign advisers sent a memo to reporters trying to tamp down expectations: they said that Republicans would try to make an issue of Fetterman’s post-stroke tendency toward “awkward pauses, missing some words, and mushing other words together.” Once the debate began, the first question to Fetterman was “What qualifies you to be a U.S. Senator?” Fetterman said, “Hi, good night, everybody.”

I don’t want to understate how significant a problem Fetterman’s condition was for his ability to debate effectively. The cognitive gaps were evident nearly every time he spoke, and shaped many of the exchanges. Often, Fetterman would begin an answer with a clear sentence, only to follow it with several confusing ones. At other times, he would hit upon a phrase of choice (a favorite was “the Oz Rule,” the “rule” being that Oz lies every time he’s on television) and continue to circle back to it, like a life raft.

When Fetterman’s answers triggered some basic political follow-ups from the hosts, he could not find the words to talk his way out of them, as politicians ordinarily do. If he was, in fact, a lifelong friend of fracking, one of the hosts, Lisa Sylvester, asked, why had he said, in 2src18, “I don’t support fracking at all”? A couple of seconds went by before Fetterman replied. When he did, he said, “I do support fracking.” He seemed to want to express another idea, but it wouldn’t come: “I don’t, I don’t—I support fracking. And I stand and—I do support fracking.”

Long before the stroke, Fetterman, who had vaulted from the mayor’s office in the declining industrial town of Braddock, Pennsylvania, to become the state’s lieutenant governor, had taken up a position in politics that could be a little complicated to explain. Six foot eight and goateed, accustomed to showing up at formal events in cargo shorts, Fetterman meant to embody a rough-hewn union Democrat who at the same time embraced some of Bernie Sanders’s platform. When it came to policy issues during the debate—exactly how far did Fetterman want to move toward “socialized medicine,” for instance?—explaining his position required a verbal fluency that is simply beyond him right now. Oz accused Fetterman of supporting “an open border,” and the moderators gave the Democrat fifteen seconds to respond. Fetterman said, “That is, again, that Oz Rule. That is just not true. Here, his family’s company was levied the largest fine, for immigration hiring of immigrate—illegals. And I think you should sit this one out in terms of a secure border.”

If you could set aside, for a minute, the tense political context in which this debate was taking place, in which the Democratic hopes to keep a Senate majority might well hinge on the Pennsylvania race, then there was an interesting rhetorical situation to notice. Fetterman was speaking in a sort of enforced simplicity that might not have got across the nuance that he would have liked but did point up how much Oz sounded like a politician—how stylized everything was in the Republican’s mouth. Trying to triangulate, to find a formulation that might appeal to both conservative and moderate voters at once, Oz sometimes said too much, like when he suggested that abortion decisions should be made by “women, doctors, local political leaders.” Across the stage, things were more straightforward. On abortion, Fetterman said, “If you believe that the choice for abortion belongs between you and your doctor, that’s what I fight for. Roe v. Wade, for me, should be the law.” On the minimum wage, he was even more blunt: “I think it’s a disgrace, at $7.25 an hour.” Why does political speech need to be more complicated than that?

It was interesting, too, how aggressive Oz was. He went after Fetterman as though this were a normal political situation, saying that the Democrat was “purposely trying to alarm” women about Oz’s position on abortion, that Fetterman’s ads were “a fiction of his imagination,” and that, when it comes to police, Fetterman had “undermined them at every level.” Clearly, Oz had made a decision—that he was facing an opponent and he would take him on—but the aggression did serve as a reminder of one reason that this race is still close: Oz has been broadly unpopular as a campaigner, mistrusted and disliked, even by many conservatives. Still, national Republicans sounded pretty sure they had a winner here. “Holy shit, Fetterman is fried,” Donald Trump, Jr., tweeted. Maybe he was right. A snap poll run by Pittsburgh’s WPXI found that eighty-two per cent of respondents thought that Oz had won the debate. But Democrats were also talking themselves into the opposite position. Paul Begala, the old Clinton hand, tweeted, “Debates are more often lost than won, and Mehmet Oz lost this one with his line that abortion should be a decision between ‘a woman, her doctor, and local elected officials.’ He is fueling the Dems’ top issue. @JohnFetterman must be pleased.”

It seems a little strange to think about exactly how this debate will affect the rest of the race, though I’m inclined to assume that it was much worse for Fetterman than for Oz. Even so, there was a rare poignancy to Fetterman’s position last night, both in what he was so obviously struggling through and in how much pressure was on him. The Democrats are in a perilous political situation at the moment—they are almost sure to lose control of the House of Representatives, President Biden is unpopular, and the economy is teetering. What they have been depending upon this year is that a few exceptional candidates in key states (Mark Kelly, in Arizona; Raphael Warnock, in Georgia; Catherine Cortez Masto, in Nevada; and Fetterman, in Pennsylvania) will pull in enough swing voters to keep control of the Senate and keep the politics of Donald Trump and Ron DeSantis at bay. So much depends upon a handful of individuals—upon their vigor on the trail, upon the precision of their arguments, upon their health. Maybe too much. ♦