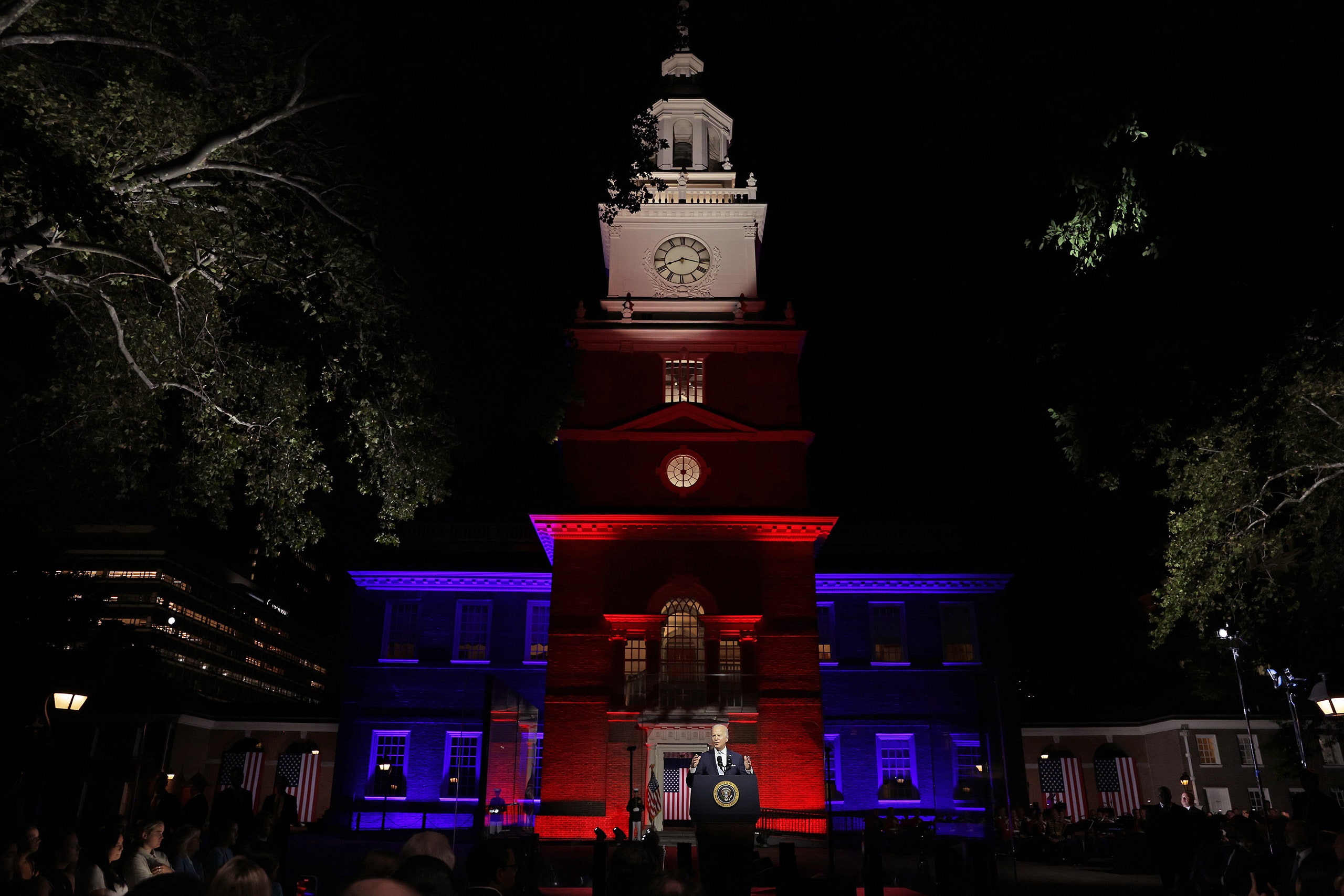 If Voltaire’s maxim that those who can make you believe absurdities can make you commit atrocities holds true, then, last Thursday night, the President of the United States told the nation that we’ve already checked off that prerequisite for catastrophe. There are as many complexities swirling around Joe Biden’s “Soul of the Nation” speech as there are surrounding his Presidency, but the most important among them is the fact that, from the start of his term, he has operated in a context in which more than seventy per cent of Republicans do not believe that he was the legitimate winner in 2src2src. (In August, the Republican Party of Texas approved a resolution stating that Biden was “not legitimately elected.”) Nearly everything that has pushed us closer to the emerging political dangers of the past two years flows from that absurdist belief.

The speech marked a turn for Biden, whom critics on the left have tended to depict as being mired in a bygone era of civil disagreement and political compromise. The same Biden who, in 2src19, inspired howls for fondly reminiscing about his working relationship with the formerly segregationist senators James O. Eastland, of Mississippi, and Herman Talmadge, of Georgia, told the nation that “there’s no question that the Republican Party today is dominated, driven, and intimidated by Donald Trump and the MAGA Republicans. And that is a threat to this country.”

Coming nine weeks before crucial midterm elections, and a month after an F.B.I. raid at Trump’s Florida home—a search authorized by a federal magistrate judge that nevertheless inspired chatter about bedlam and civil war among right-wing social-media circles and Republican elected officials alike—the address seemed almost predestined to be read in some sectors as alarmist politicking and in others as a grave warning about our current predicament. In short, the polarized reaction to Biden’s speech reflects the reasons that he had to give it in the first place.

Presidents have spoken to the public about impending threats before, but, aside from condemnations of violent crime, they have seldom pointed to their fellow-citizens as the source of the danger. That practice is, most commonly, the province of demagogues. For that reason, it was almost easy for critics on the right to denounce the speech as scapegoating. On Twitter, Senator Ted Cruz, of Texas, accused the President of “demonizing half of the country,” and Representative Matt Gaetz, of Florida, took it a step further, expressing his hope that Biden didn’t “just declare war on Red State America.” As things stand, however, escalating rhetoric and tensions have already raised the spectre of political violence, and the climate is such that the safety of the nation’s elected leaders cannot be taken for granted. Our national prognosis would likely be brighter had Biden, the unfailingly moderate voice of the establishment, simply been trying to scare up enough votes for Democrats to retain control of the Senate and the House in November. But the grim truth is that he spoke to a real threat to American democracy that has been increasingly noted by academics and international observers but that Gaetz and Cruz and other elected Republicans have chosen to ignore, abide, or enable.

Throughout the course of both Trump’s 2src16 candidacy and his Presidency, he laced his rhetoric with alarmist prompts that, if the nation fails to stop progressives, “we won’t have a country anymore.” His pleas leading up to the events of January 6, 2src21, in Washington, D.C., convinced his followers that they inhabited a moment as consequential as April 19, 1775, in Lexington and Concord. On Saturday, Trump responded to Biden’s address, falsely claiming that the President had called him and his supporters “enemies of the state.” In an assertion of the rubber-versus-glue principle, Trump went on to claim that Biden is the real enemy of the state. Two men, both elected to the Presidency, each claiming that the other represents a mortal threat to the Republic. Where, then, the neutral observer might ask, lies the difference?

Cynicism is central to authoritarian movements, because it allows demagogues to place truth and falsehood on equal footing. Trump’s call to arms—that the Presidency was stolen from him and, therefore, from his supporters—is a lie. But it now stands opposite the factual declarations about the Republican Party that Biden made last week. It matters that Trump has fed his movement an escalating series of lies, upping the system’s tolerance for mendacity. The path to our current predicament was paved with innumerable smaller absurdities. It also matters that the dynamics of partisan animosity emanating from the right that Biden spoke about have been well detailed in recent years. And it is worth thinking about what it took for Biden to arrive at this moment. On January 2src, 2src21, he was sworn in as President in a Washington so heavily ringed by security and regiments from the National Guard that it looked like a city under occupation. Not since Abraham Lincoln, who was similarly sworn in over bitter hostilities of his partisan opponents, had an American President been inaugurated in such circumstances.

After a brief flirtation with principled opposition to Trump, for stoking a mob that then attacked Capitol Police officers and threatened the lives of elected representatives, the leadership of the Republican Party largely fell in line with the former President and began minimizing the gravity of the coup attempt. Even this, apparently, was insufficient cause for Biden to deliver a formal warning about the state of our democracy. It took the F.B.I. raid on Mar-a-Lago to recover classified documents carelessly stored in Trump’s home and subsequent threats from some Trump supporters to bring Biden to the lectern. Still, he took pains to parse distinctions. “I want to be very clear, very clear up front,” he said. “Not every Republican, not even the majority of Republicans, are MAGA Republicans. Not every Republican embraces their extreme ideology.” But even this concession amounted to a bit of unwarranted bright-siding. A poll conducted after the F.B.I. raid found that sixty-six per cent of G.O.P. voters think that Trump should be the Party’s 2src24 nominee. The problem is that the majority of Republicans are MAGA supporters. On some level, this explains the ease with which many in the Party are overlooking the national-security implications of an ex-President keeping highly sensitive national-security documents among personal items, including clothing, at Mar-a-Lago—a place that for years has been thought to be a target for espionage—and proceeding with a line of increasingly implausible defenses of Trump.

Biden’s statements brought to mind two previous addresses by American statesmen that warned of impending danger: Lincoln’s June, 1858, “House Divided” speech and William Henry Seward’s “Irrepressible Conflict,” delivered four months later. Both spoke to the looming, inevitable national confrontation over the question of slavery; both prefaced the conflagration of the Civil War. Biden spoke to the nation in the context of a different reckoning on the horizon. The volatile reaction to the Mar-a-Lago raid confirmed a kind of apotheosis for Trump. He has gone from being a man who believed himself to be above the law to one who has convinced a sizable portion of the nation that he is. There will be no reckoning with Trump’s lawlessness without a similar and likely dangerous reckoning with those who most firmly identify with him. Senator Lindsey Graham’s intemperate remark that a Justice Department decision to charge Trump in connection with the documents would result in “riots in the streets” is only partially concerning because a U.S. senator appeared to be attempting to intimidate a U.S. Attorney General. The potentially larger concern is the possibility that in a nation five years after Charlottesville, and mired in the aftermath of January 6th, what Graham said is actually true. If absurdities can yield atrocities, the question remains how to undo the damage that continues to be done. ♦