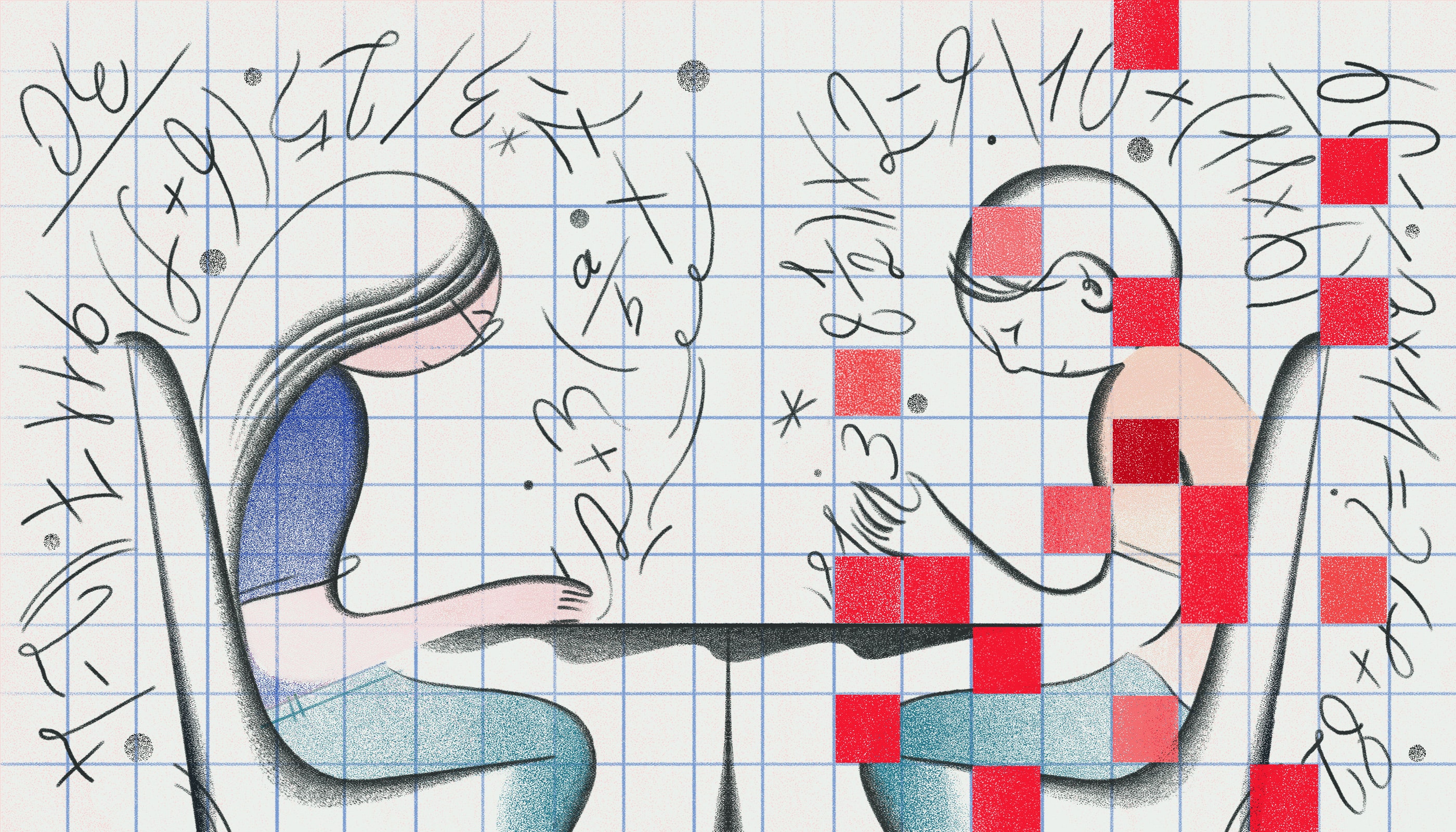 Earlier this week, I wrote about the history of progressive math education, the culture wars it has inspired over the past hundred years, and the controversy over the California Math Framework. Today, I want to start with a much broader question: What do we really know about how to teach math to children?

The answer is not all that much—and what little we do know is highly contested. An American math education usually proceeds in a linear fashion, with the idea that one subject prepares you for the next. Take, for example, the typical path through mathematics for a relatively advanced student. They will start with basic arithmetic, learn multiplication and division, and graduate to fractions. Then they’ll go into algebra, then geometry, then Algebra II/trigonometry, before tackling calculus. There may be small variations to this sequence, but that’s more or less how most kids learn math in the U.S.

But are we sure that these math subjects should really go in this order? And are we sure that these are the only steps that should be included? There are arguments, for example, that say that children should engage in play-based exploration of concepts of calculus in preschool and kindergarten before they start learning to add and subtract, because proper guidance through pattern-recognition activities like Legos and origami will place arithmetic into the correct context and make it feel less tedious.

A much less radical example can be found at a school district in Escondido, California, that recently altered the traditional math procession by placing all its freshmen and sophomores in “Math I” and then “Math II.” When they reach their junior year, those students go through a “decision tree” where they answer questions like “Do you know what type of career you want to have?” and “Is your career in a STEM field?” Students who answer yes, and say they want to ultimately take calculus, are put in a math class that includes precalculus; if not, they are placed in statistics-based courses. The idea is to make math education better for all students, even those who might not want to pursue careers in STEM, though some in the district have also acknowledged concerns that the system might reinforce inequality, with the statistics track being considered the “pathway for students of color.”

The Escondido experiment highlights a lot of the more entrenched questions in math education. Does kicking an equity issue down the road really solve it? How should we address disparate outcomes in achievement while also accepting that most students won’t go on to do college-level math? And why is there an assumption that statistics, with all its potential applications and iterations, should be seen as the remedial route while calculus gets reserved for the more accomplished students?

Beyond the question of tracking, there are debates about whether PEMDAS, the acronym many of us learned about the order of operations in a math problem, is actually the right way to do things; whether the traditional pedagogical structure, in which a teacher tells you how to do something and you do it for homework, might be totally backward; and whether the United States, which scores relatively low in math compared with other wealthy nations, is actually bad at math, or if we just have a bottleneck problem.

Last month, the Bill and Melinda Gates Foundation announced that it would be spending more than a billion dollars on improving math education in the U.S. As was the case in the nineteen-nineties math wars, much of the early work will focus on deploying technology, studying how students learn, and addressing racial and economic achievement gaps. According to Bob Hughes, the Gates Foundation’s director of K-12 education, the intention is to help “African American and Latino students and students of all races and backgrounds experiencing poverty,” with an emphasis on transition years, including from eighth to ninth grade, which some studies have shown goes a long way in determining whether a student will stick with math in high school and beyond.

The Gates Foundation’s math prescriptions are still not set in stone, but Hughes discussed interventions such as cutting costs in order to expand math tutoring for students who have fallen behind their grade level, implementing more digital tools, and developing curricula and classroom materials that will aim to help teachers make math both accessible and challenging. The foundation seems particularly interested in this last part: how different forms of pedagogy and instruction find their way into classrooms. “It’s very hard for quality materials to necessarily buck the trend of incumbent players in the curriculum space,” Hughes said. “So we’re thinking a lot about markets.”

The subtext of this project, as I see it, is that math education has become entirely too cluttered with a host of bad or untested ideas. The researchers at the Gates Foundation seem to believe that there’s a way to locate proper techniques, and insure that as many teachers impart them to their students as possible. For them, finding these better methods involves a lot of data, “UX studies,” and “A/B testing,” all of which can be done efficiently and quickly if students are using math-learning technology that will track their progress and proficiency.

The Gates Foundation has generally steered clear of politics. Hughes’s tone in our conversation was noncommittal, even when discussing the question of when to teach algebra—something that became controversial in the education world when the authors of the California Mathematics Framework recommended ceasing algebra instruction for middle schoolers. (“The research base is mixed,” Hughes has said. “I think that we’re going to be supporting people who believe [Algebra I] in eighth grade or ninth grade is appropriate.”) But he did offer a set of “non-negotiables,” which included a need to be “kind and gentle” with students, a focus on grounding solutions in teachers and communities, and, finally, an emphasis on getting the right answer.

This stands in opposition to much of the progressive push in math education, which—as Brian Lindaman and Jo Boaler, two of the authors of the California curriculum guidelines discussed in Tuesday’s column, point out—emphasizes the need for students to “struggle” together in a classroom to figure out a solution, and posits that the right answer is ultimately not as important as the problem-solving skills that are acquired through “inquiry-based learning.”

The Gates Foundation seems to be trying to forge a middle path by focussing on Black and Latino math achievement without resorting to the methods of some progressive educators who have spent their careers working on that very same problem. The foundation is relying on studies, tech, and data collection as a way to both assess and correct the ways in which children learn math, under the belief that there is, in fact, a smarter way to do all this that does not fall into all the political traps of the past and present.

These fights—between the dogged pursuit of social-justice-based education and the various backlashes that try to reify the status quo—are in fact the only constant in American math education over the past century. Many people have tried to fairly assess the merits of both sides of the fight with proper historical context, and hack out the type of compromise that the Gates Foundation desires. One such person is Alan Schoenfeld, a professor of mathematics and education at the University of California, Berkeley. In an influential 2srcsrc4 article about the math wars, Schoenfeld writes:

Even though the wars rage, partly because there are some true believers on both sides and partly because some stand to profit from the conflict, I remain convinced that there is a large middle ground. I believe that the vocal extremes, partly by screaming for attention and partly by claiming the middle ground (“it’s the other camp that is extreme”), have exerted far more influence than their numbers should dictate.