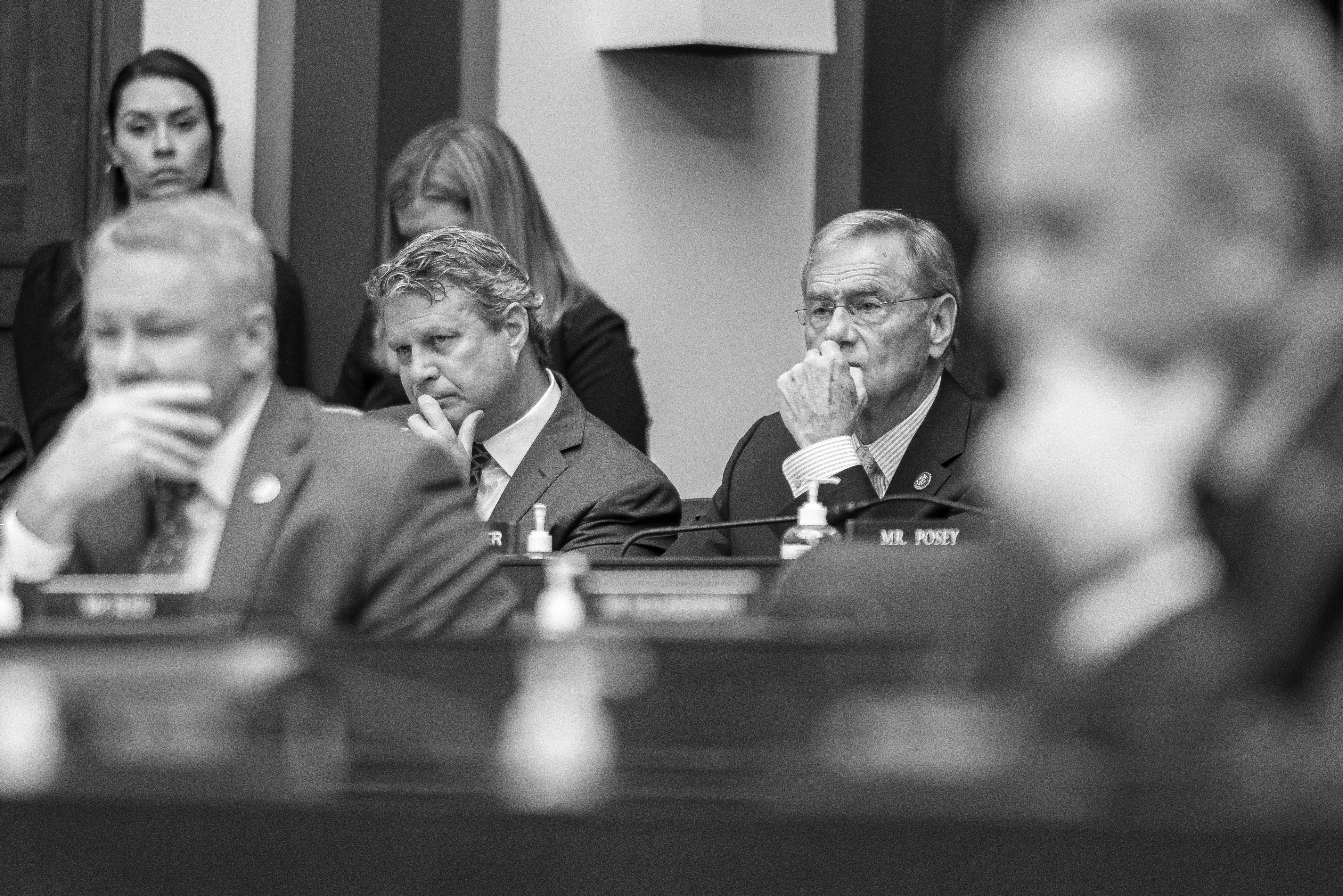 Sam Bankman-Fried, the former poster boy for cryptocurrency, reportedly has agreed to be extradited from the Bahamas, to face fraud charges that could keep him confined for decades. The tremors from the collapse of FTX, his crypto-trading platform, continue to reverberate around Washington. At a hearing last Wednesday, Sherrod Brown, the Democratic head of the Senate Banking Committee, said he hoped that Bankman-Fried would “soon be brought to justice,” and added that he “owes the American people an explanation.”

The thirty-year-old entrepreneur certainly owes FTX’s bereft customers a fuller account than the pleas of ignorance he offered up before being arrested. But Bankman-Fried isn’t the only one with explaining to do. There are also the politicians from both major parties who accepted his campaign donations and advocated for legislation he favored. According to Damian Williams, the U.S. Attorney for the Southern District of New York, the political donations that Bankman-Fried made actually came from money that he diverted from customers. Although a number of the recipients have now returned Bankman-Fried’s tainted money, or donated it to charity, few, if any, have repudiated the approach to crypto regulation that he was pushing.

“FTX followed the standard playbook of influencing Washington, and that’s buying influence on a bipartisan basis,” Dennis Kelleher, the president of the not-for-profit organization Better Markets, told me, last Friday. A centerpiece of Bankman-Fried’s lobbying efforts was the Digital Commodities Consumer Protection Act, a bill unveiled in August by Debbie Stabenow, a Michigan Democrat who is the chair of the Senate Agriculture Committee, and by John Boozman, an Arkansas Republican who is the committee’s ranking member. The co-sponsors of the bill include the Democrat Cory Booker and the Republican John Thune, who also serve on the Agriculture Committee. According to press reports, Bankman-Fried, or other executives at FTX, gave campaign contributions to Stabenow, Boozman, Booker, and other members of the committee. (He also contributed to the Republican Cynthia Lummis and the Democrat Kirsten Gillibrand, who co-sponsored another crypto bill introduced earlier this year.)

What has farming got to do with crypto? Under this country’s Balkanized system of financial regulation, the Securities and Exchange Commission regulates financial securities, such as stocks and bonds.The Commodity Futures Trading Commission oversees commodity futures, such as contracts for corn and grain and pork bellies, and thus falls under the purview of the Senate and House committees on agriculture. Gary Gensler, the head of the S.E.C., has made clear that he regards the vast majority of crypto tokens as securities, which implies that the S.E.C. would regulate them. If firms like FTX were forced to register with the S.E.C., they would have to make extensive public disclosures, for which they would be legally liable, and, depending on exactly how they register, they could also have to comply with many other agency requirements relating to conflicts of interest, protecting customer accounts, and risk compliance. The S.E.C. has a long history of regulating retail markets and retail-brokerage firms.

But, rather than placing the S.E.C. in charge of supervising the crypto industry, both of the bills coming out of the Senate Agriculture Committee “would move in the opposite direction,” Hilary J. Allen, a law professor at American University, said, testifying in last week’s hearing of the Senate Banking Committee. “Both create regimes for crypto assets to be regulated by the C.F.T.C.” Critics say that this is potentially a big problem. “The C.F.T.C. is widely regarded to be the crypto industry’s preferred regulator,” Allen went on. “The C.F.T.C. is a much smaller agency with a much smaller budget than the S.E.C., it has no statutory investor-protection mandate, and it has limited experience regulating retail-dominated markets.” Kelleher told me that handing over primary regulatory authority to the C.F.T.C. would be a massive win for the crypto lobby. “The C.F.T.C. has been chronically underfunded, and it is easily penetrated and captured by an industry it is supposed to regulate,” he said. “FTX and other crypto firms wanted the weakest possible regulator, and that’s the C.F.T.C.”

Supporters of the two crypto bills say their critics are mischaracterizing legislation that would provide for effective dual oversight of the crypto industry, with the C.F.T.C. regulating crypto tokens that are classed as commodities and the S.E.C. regulating crypto tokens that are classed as securities. “I have not been shy about my encouragement of bills that contemplate shared responsibility for the C.F.T.C. and the Securities and Exchange Commission,” Rostin Behnam, the chair of the C.F.T.C., told a hearing of the Senate Agriculture Committee, earlier this month. Behnam, who previously served as a senior counsel to Senator Stabenow, also said he had been encouraged by the bipartisan support for a regulatory approach that would “impart transparency, accountability, stability, customer protections, and oversight across digital assets.”

However, questions have also been raised about the relationship between the leadership of the C.F.T.C. and the crypto industry. At a New York University School of Law event in September, Behnam said, “Bitcoin might double in price if there’s a C.F.T.C.-regulated market.” FTX hired a number of former agency officials and lobbied the agency aggressively. In his recent congressional testimony, Behnam confirmed that he and his staff met Bankman-Fried ten times during the past fourteen months, and also spoke on the phone and exchanged messages with the now disgraced entrepreneur. He said that these meetings concerned a request from FTX to allow one of its affiliated companies—LedgerX, a digital platform on which investors trade derivatives tied to cryptocurrencies—to settle trades without the involvement of any other financial intermediaries. There were “strong feelings” about the company’s application, Behnam said, noting that he approached it by being “transparent and open” with FTX. The LedgerX request hadn’t been approved by the time FTX collapsed, and Behnam pointed out that the derivatives platform, which was supervised by the C.F.T.C., survived the blowup unscathed, with its customers’ funds intact. “This is regulation working,” he insisted.

At the same hearing, Stabenow said that passage of the legislation she and Boozman proposed could have prevented FTX’s collapse, an assertion that Kelleher dismissed as unfounded. Other defenders of crypto still make the argument that subjecting the industry to intrusive regulation would inhibit its ability to innovate, and harm the economy. That’s a deeply dubious claim. Although the blockchain technology that underpins the crypto industry may have applications that could conceivably expand financial access and boost economic growth, that largely hasn’t happened yet, at least in the United States. Indeed, if this year’s crises in the crypto sector have indicated anything, it’s that much of what passes for crypto “innovation” involves encouraging people to speculate, often with borrowed money, on digital assets that have little or no intrinsic worth and can swing wildly in market value. “Crypto has demonstrated little utility in terms of real-world capital formation or financial inclusion . . . and so the public doesn’t need the industry to prosper,” Professor Allen said, in her testimony to the Senate Banking Committee. “What the public actually needs is protection—individual investors need protection from crypto frauds, and our broader financial system also needs protection from crypto’s booms and busts.”