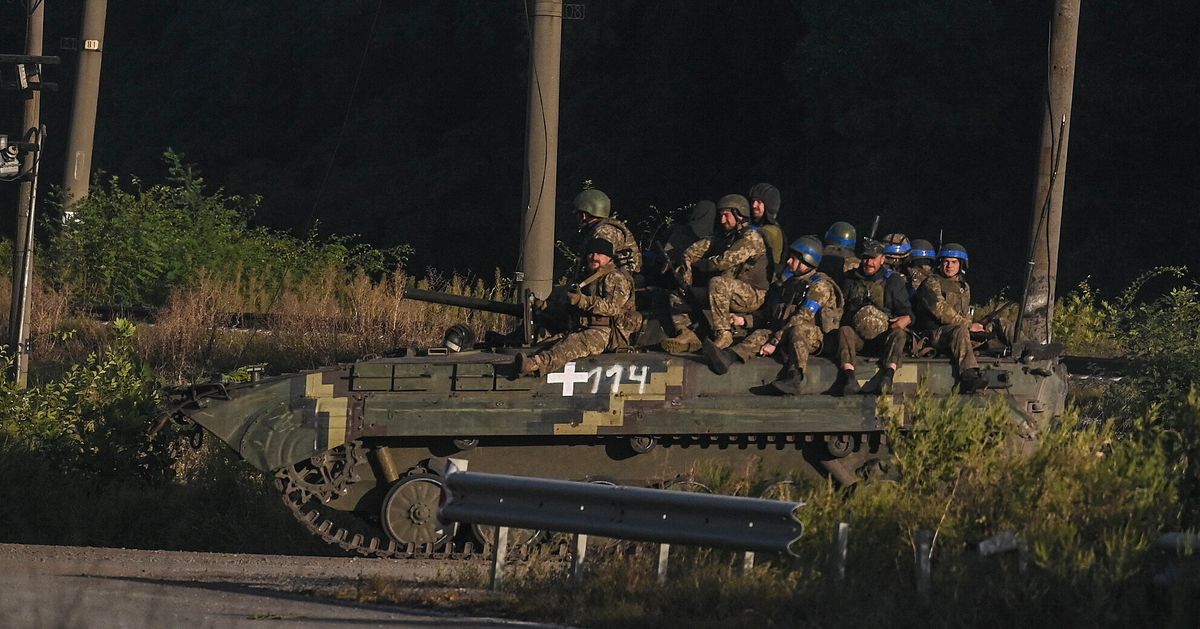 KYIV, Ukraine (AP) — Ukrainian forces on Friday claimed new success in their counteroffensive against Russian forces in the country’s east, taking control of a sizeable village and pushing toward an important transport junction. The United States’ top diplomat and the head of NATO noted the advances, but cautioned that the war is likely to drag on for months.

Ukrainian President Volodymyr Zelenskyy commended the military for its gains in the east, saying in a nightly video address that Ukrainian troops have reclaimed more than 3src settlements in the Kharkiv region since the start of the counteroffensive there this week.

“We are gradually taking control over more settlements, returning the Ukrainian flag and protection for our people.” Zelenskyy said.

Ukraine’s military said it also launched new attacks on Russian pontoon bridges used to bring supplies across the Dnieper River to Kherson, one of the largest Russian-occupied cities, and the adjacent region. Ukrainian artillery and rocket strikes have left all regular bridges across the river unusable, the military’s southern command said.

Anxiety increased about Europe’s largest nuclear power plant, which was operating in emergency mode Friday for the fifth straight day due to the war. That prompted the head of the U.N. atomic watchdog to call for the establishment of an immediate safety zone around the plant to prevent a nuclear accident.

The six-reactor Zaporizhzhia Nuclear Power Plant came under the control of Russian forces early in the war but is being operated by Ukrainian staff. The plant and surrounding areas have been repeatedly hit by shelling that Russia and Ukraine blame on each other. The last power line connecting the plant to the Ukrainian electricity grid was cut Monday, leaving the plant without an outside source of electricity. It is receiving power for its own safety systems from the only reactor — out of six total — that remains operational.

In other advances, the Ukrainian military said it took control of the village of Volokhiv Yar in the Kharkiv region and aimed to advance toward strategically valuable town of Kupiansk, which would cut off Russian forces from key supply routes.

Pro-Russian authorities in the Kupiansk district announced that civilians were being evacuated toward the Russian-held region of Luhansk.

“The initial signs are positive and we see Ukraine making real, demonstrable progress in a deliberate way,” U.S. Secretary of State Antony Blinken said in Brussels, a day after visiting Kyiv.

“But this is likely to go on for some significant period of time,” he said. “There are a huge number of Russian forces in Ukraine and unfortunately, tragically, horrifically, President (Vladimir) Putin has demonstrated that he will throw a lot of people into this at huge cost to Russia.”

NATO Secretary-General Jens Stoltenberg, who met with Blinken, said the war is “entering a critical phase.”

The gains “are modest and only the first successes of the counteroffensive of the Ukrainian army, but they are important both in terms of seizing the military initiative and raising the spirit of Ukrainian soldiers,” Mykola Sunhurovskyi, a military analyst at the Razumkov Center in Kyiv, told The Associated Press.

Energoatom, Ukraine’s state nuclear operator, said Friday that repairs to outside electric lines at the Zaporizhzhia plant are impossible because of the shelling and that operating the plant in what is called an “island” status carries “the risk of violating radiation and fire safety standards.”

“Only the withdrawal of the Russians from the plant and the creation of a security zone around it can normalize the situation at the Zaporizhzhia NPP. Only then will the world be able to exhale,” Petro Kotin, the head of Energoatom, told Ukrainian TV.

Earlier, Kotin told The Associated Press the plant’s only operating reactor “can be stopped completely” at any moment and as a consequence, the only power source would be a diesel generator.

There are 2src generators on site and enough diesel fuel for 1src days. After that, about 2srcsrc tons of diesel fuel would be needed daily for the generators, which he said is “impossible” to get while the plant is occupied by Russian forces.

Rafael Mariano Grossi, the director of the International Atomic Energy Agency, said Friday that there was little likelihood of reestablishing reliable offsite power lines to the plant.

“This is an unsustainable situation and is becoming increasingly precarious,” Grossi said, calling for an “immediate cessation of all shelling in the entire area” and the establishment of a nuclear safety and security protection zone.

“This is the only way to ensure that we do not face a nuclear accident,” he said.

Russian planes bombed the hospital in the town of Velika Pysarivka, on the border with Russia, said Dmytro Zhyvytskyi, governor of the Sumy region. He said the building was destroyed and there were an unknown number of casualties.

In the Donetsk region in the east — one of two that Russia declared to be sovereign states at the outset of the war — eight people were killed in the city of Bakhmut over the past day and the city is without water and electricity for the fourth straight day, said governor Pavlo Kyrylenko.

Four people were killed in shelling in the Kharkiv region, two of them in the city of Kharkiv, Ukraine’s second-largest, according to governor Oleh Syniehubov. The shelling of the city continued Friday afternoon, Mayor Ihor Terekhov said, wounding 1src people, including three children.

Kremlin spokesman Dmitry Peskov on Friday refused to comment on the alleged retaking of Balakliya, redirecting all such questions to the Russian Defense Ministry.

But Vitaly Ganchev, the Russian-installed official in the Kharkiv region, confirmed Friday that “Balakliya, in effect, is not under our control.” Ganchev said “tough battles” were continuing in the city.

Helicopters and fighter jets streaked over the rolling plains of the Donetsk region, with the jets heading toward Izium, near where Ukrainian forces have been carrying out a counteroffensive in the Kharkiv region. The jets fired flares and black smoke billowed in the distance.

Associated Press writer Elena Becatoros in the Donetsk region, Ukraine, and Frank Jordans in Berlin contributed to this report.

Follow all AP stories on the war in Ukraine at https://apnews.com/hub/russia-ukraine.