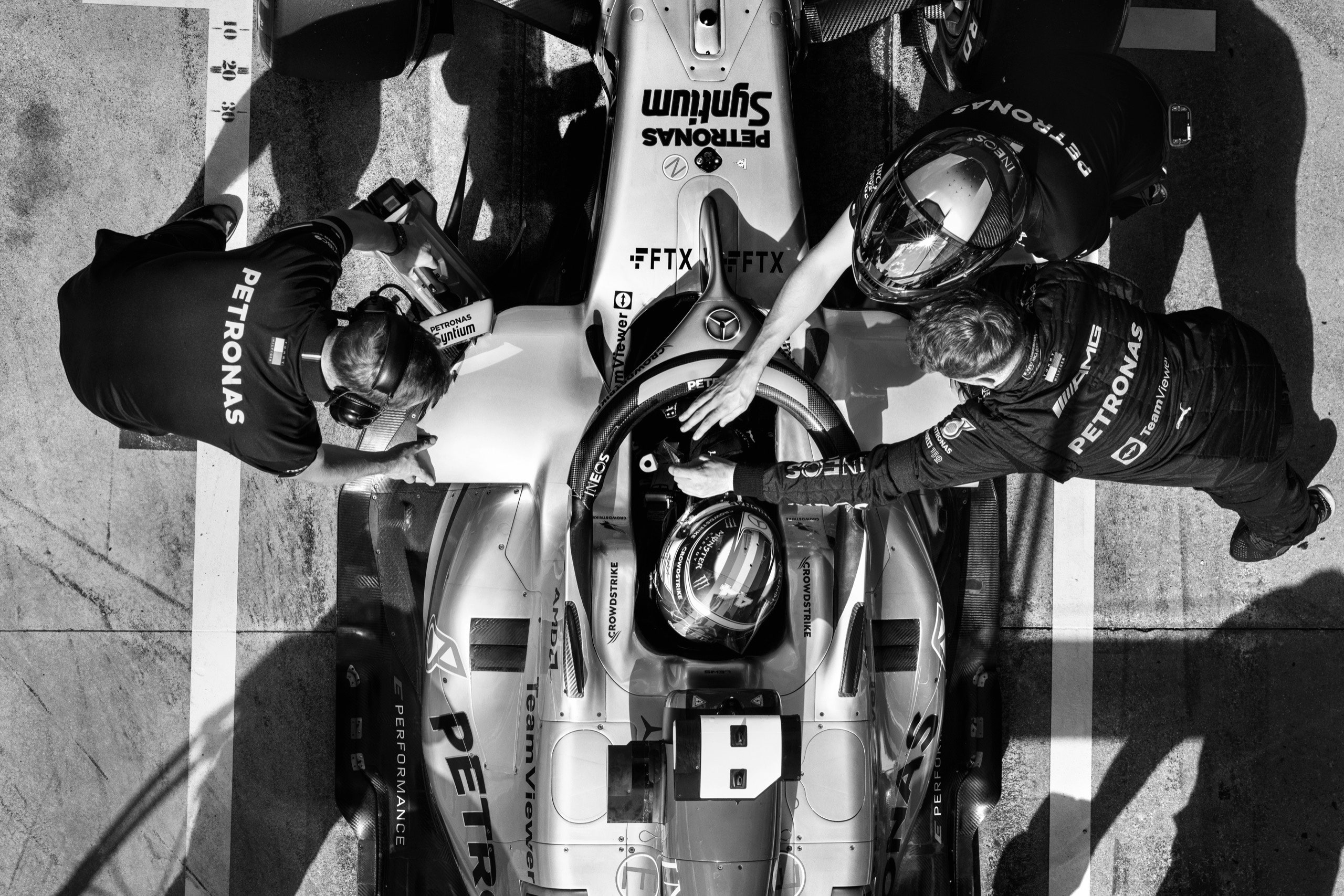 A few minutes before the start of the Dutch Grand Prix, which was held last month in baking sunshine at Zandvoort, a beachside racetrack within commuting distance of Amsterdam, Toto Wolff, the principal of the Mercedes-AMG Petronas Formula 1 team, walked out onto the starting grid. A Grand Prix begins when a row of five red lights above the start line is extinguished, but, for a short time before, the track is a twenty-thousand-horsepower mob scene.

Each of the unearthly, long-nosed machines is attended by a mobile I.C.U. of generators, steel trolleys, laptops, tire blankets, and uniformed mechanics in crash helmets and flameproof gear. Umbrellas shroud the drivers’ cockpits. Billionaires stalk the grid. Race marshals hold clipboards in red gloves. The noise is beyond belief: helicopter blades, high-speed wheel guns, the desperate howls of the cars, the massed emanations of the waiting crowd.

In Zandvoort, loudspeakers laced the sky with dance music. The afternoon was humid; the air felt saturated. Wolff was at home. He is tall, dark, and Austrian. He could pass for a Sacha Baron Cohen character or for someone who breezes past you in the airport, smelling good, wearing loafers and no socks. He worked the grid in a white shirt emblazoned with the Mercedes star and the logos of twelve other corporate sponsors, black pants, team-issued Puma sneakers, lovable smile. He kissed people’s cheeks, touched elbows, gave impromptu TV interviews, and yelled last-minute thoughts to his drivers. Somewhere in the fumes was death. Two Formula 1 drivers were killed in the span of three years at Zandvoort in the seventies. At one point, I found myself by the pit lane when three cars leaped out, red tail-lights flashing. The speed was like a whip.

Wolff, who is fifty, is the best team boss in the recent history of the world’s fastest motorsport. The “formula” of Formula 1 refers to a set of rules, first enshrined after the Second World War, to bring some order to the urge to race dangerous cars on the asphalt of foreign cities. Whereas Nascar is all left turns, cars that look like cars, and spectator-friendly oval tracks, Formula 1 has a madder, purer heart: the oldest courses date from a century ago. Races last around ninety minutes. They twist, sweep, and go down hills, sometimes on existing streets. The cars, which started out as death traps for daredevils, are now specimens of extreme technology, flying algorithms that fight for advantages of a hundredth of a second—the distance of a yard over a three-mile track. The sport is esoteric, but globally so. Last year’s Mexican Grand Prix attracted three hundred and seventy thousand spectators. The Singapore race runs through the city at night. (Drivers can shed six pounds in stress and sweat.) The average television audience for a Formula 1 race is around seventy million people—four times that of the typical N.F.L. game—and the best drivers earn soccer-star salaries and lasting fame. When Ayrton Senna, a three-time world champion, was killed in a race, in 1994, the Brazilian government declared three days of mourning. A million people waited in the heat to pay their respects, and many spoke of their saudade—an inexpressible state of longing for something that is gone.

Between 2src14, when Wolff took charge of Mercedes, and 2src21, the team won the world championship eight years in a row—an unprecedented achievement. (In Formula 1, there is a constructors’ championship, for the most successful team, and a drivers’ championship, awarded at the end of some twenty races.) Each team has two drivers. Mercedes’s star is Lewis Hamilton, who earned around sixty-five million dollars last season. During the team’s winning streak, Hamilton won six individual world titles, bringing his career total to seven. No one has ever won eight. “I couldn’t think of a better friend. I couldn’t think of a better boss,” Hamilton told me, of Wolff.

Formula 1 is currently surging in popularity, particularly in the United States, in part because of a Netflix series, “Drive to Survive,” which has embroidered the nerdery of the sport with artful camerawork and bitchy insight into the lives of its protagonists. Wolff, who speaks five languages and whose wife, Susie, is a former racing driver, is one of the show’s natural stars. Of the ten team principals in the sport, only Wolff and his archrival, Christian Horner, a Briton who runs the Red Bull team, have ever won a world championship. But, unlike Horner and the rest of his peers, Wolff is also a co-owner of his team. His one-third stake in Mercedes is conservatively valued at around five hundred million dollars. He sees himself simultaneously as a competitor and as someone who is shaping the future of a multibillion-dollar business. “The other team principals, and I don’t mean this in an arrogant way, are incentivized for performance only,” Wolff said. His rivals see this. “He’s playing a game and he is always one move in advance,” one of them told me.

But this season Wolff and Mercedes have failed to win a single race. The Dutch Grand Prix was the fifteenth of the season, and Mercedes’s best results so far were a couple of second-place finishes. (In 2src2src, the team won thirteen out of seventeen.) Hamilton, who joined Formula 1 as a rookie in 2srcsrc7, has never gone a season without winning at least one race. Ahead of the U.S. Grand Prix, in Austin, on October 23rd, the team was languishing in third place, behind Red Bull and Ferrari—its worst position in a decade. Seeing Wolff and Mercedes lose their way has been as disconcerting as it has been refreshing, like watching Roger Federer shank his serve, the Yankees miss the playoffs, Simone Biles miss the beam. It is understandable, up to a point. “We’ve not gone from being an eight-time-winning world-championship team to not being able to build cars,” Hamilton said. “We just . . . it’s wrong this year.”

The ostensible reason was a change in the rules. Every few years, the Fédération Internationale de l’Automobile, which has overseen Grand Prix racing since 19src6, forces the teams to redesign their cars. Normally, the official logic has to do with safety, or with making it easier for cars to overtake one another, but there is almost always an unspoken motive: to upset the existing order of things and to stop one team from gaining a permanent advantage.

In the past, Mercedes profited from these changes, adapting faster than its rivals. But the 2src22 reset was unusually far-reaching. One of the aims of the new rules was to reconfigure the downforce generated by the cars, to reduce the amount of “dirty air” left in their wakes and to allow for closer racing. At a preseason testing event in Bahrain, in March, Mercedes’s new car—the W13—appeared to embody the boldest interpretation of this idea. It was skinnier and more futuristic than the rest. “People were looking at that thinking, Wow. Mercedes are going to blow the field away,” George Russell, the team’s other driver, told me. “Within reason, we thought that as well.”

But the W13 proved capricious. Data collected in the wind tunnel, or through computer modelling, didn’t pan out on the track. At high speeds, the car bounced, an effect known as porpoising. “My back is killing me!” Hamilton yelled on a long straight in Baku, in June, where the floor of the car repeatedly hit the asphalt at more than two hundred miles per hour. Attempts to resolve the issue only uncovered more problems. “We’ve tried and tried and failed. And tried and tried and failed,” Hamilton said. Andrew Shovlin, Mercedes’s trackside-engineering director, who has a Ph.D. in the dynamics of military logistics vehicles, compared fixing the W13 to peeling an onion. “Even the aerodynamic bouncing manifests itself in about three different mechanisms,” he said.

The other reason for Mercedes’s poor performance was a sense of injustice and doom. In 2src21, with five laps remaining in the final race of the season, Hamilton was leading the Abu Dhabi Grand Prix, on his way to an eighth individual world title and solitary greatness. Hamilton had won the previous three races; he had the car on a string. “He was unbeatable and we were unbeatable,” Wolff said.

On lap fifty-three in Abu Dhabi, the race was interrupted by a crash, and then a safety car took over. (In Formula 1, when there is a hazard on the track, a sports car with flashing lights leads a stately, jumbled procession of cars, until the danger is cleared.) Under normal circumstances, the Grand Prix would have finished behind the safety car, with the race order intact. But the race director, an F.I.A. official named Michael Masi, made the decision to divert a group of cars to enable a final lap of racing between Hamilton and the second-place driver, Max Verstappen, of Red Bull. The drivers were equal in points in the world-championship standings. Verstappen was on fresh tires; he slipped past Hamilton and took the title. The F.I.A. later concluded that Masi had made a “human error,” and he left his post. But the result stood.

Whenever Abu Dhabi came up in conversation, Wolff talked himself up into a rage and then slowly talked himself down again. “How much injustice is happening in the world every day on a terrible scale, human tragedies?” he said. “I’m finding peace with myself.” But Mercedes hasn’t won a race since. “For Toto, it was more than a disaster,” Frédéric Vasseur, the team principal of Alfa Romeo, and one of Wolff’s closest friends in the sport, said.