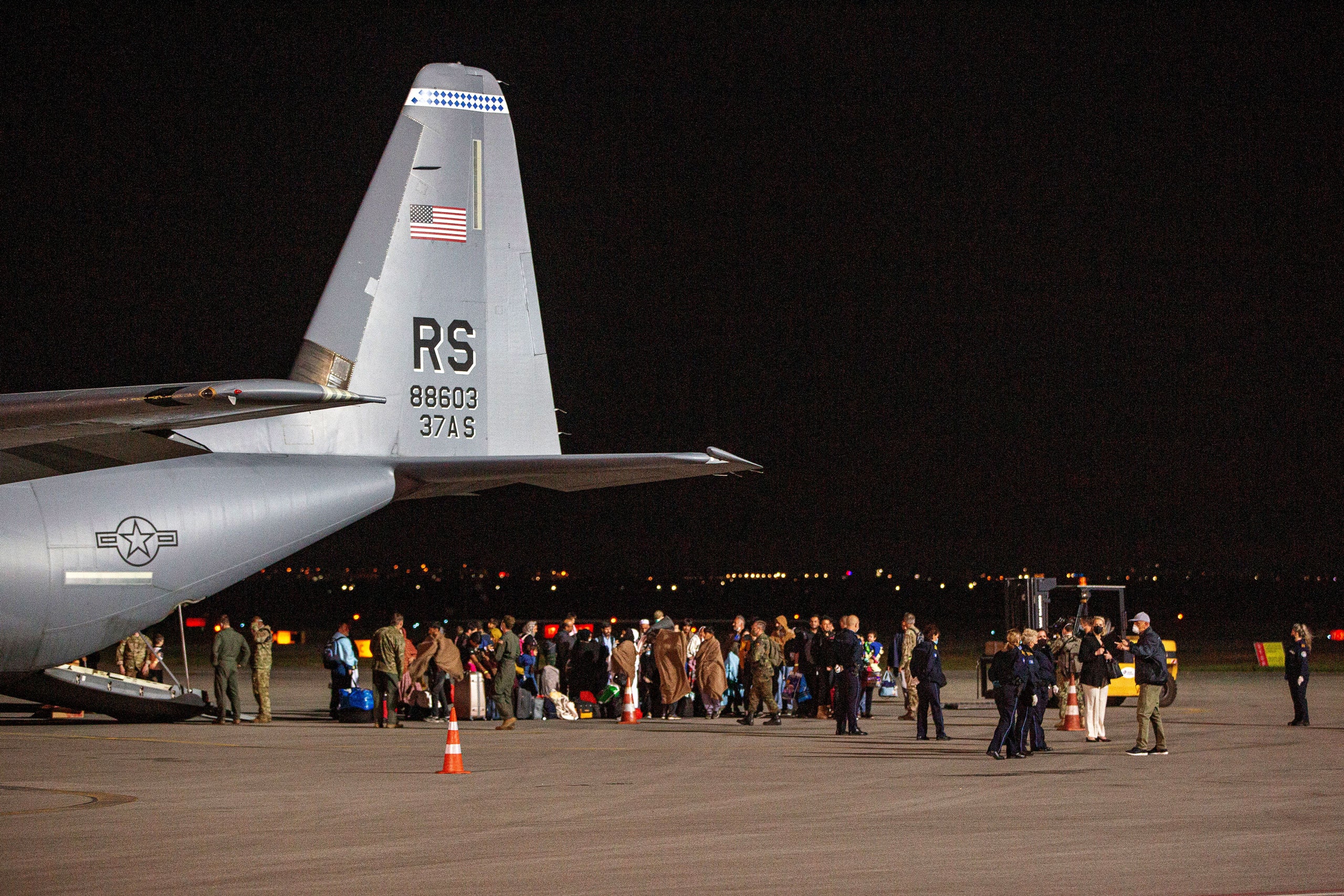 It was past midnight, but lights burned and phones buzzed in an unremarkable office suite a block from the White House. The bland rooms of Boone Group, a defense-contracting firm, had been turned into a makeshift operations center where some dozen volunteers, on laptops and phones, were making a desperate effort to evacuate people from Afghanistan. Tactical flowcharts and lists of people stashed in safe houses on the other side of the planet covered dry-erase boards; a detailed diagram of the Kabul airport hung in the conference room; a digital clock showed the minutes slipping past in Afghanistan time.

Matt Zeller roamed the office in flip-flops, frowning into his phone, groaning out expletives, and announcing disquieting scraps of uncorroborated information to anyone within earshot. He received a report that a Taliban representative had been in the air-traffic-control tower at the Kabul airport since the day before. The gates at the airport were closed again. “He better not be asleep,” he hollered into the phone. “He better not.”

A former Army reservist and C.I.A. analyst who served in Afghanistan in 2008, Zeller has toiled for years as an advocate for Afghans endangered by their work for the United States. In 2013, Zeller and Janis Shinwari, an Afghan interpreter whom Zeller credits with saving his life in a shoot-out with the Taliban, founded No One Left Behind, a nonprofit that helps Afghans apply for special immigrant visas and resettle in the United States. But the Afghan S.I.V. program has been continually beset by bureaucratic delays and opaque vetting. By the time President Biden took office, there was a backlog of about twenty thousand Afghan families who had asked to be considered for the visas, saying that their lives would be in danger if the Taliban took over. Many of them had been waiting for years.

When Biden announced his plans to withdraw troops from Afghanistan this spring, No One Left Behind was among an improbable alliance of refugee groups, veterans’ organizations, and U.S. lawmakers who warned the Administration that it was not evacuating allies fast enough. Now their fears had come true. The Afghan government crumbled before the United States had completed the withdrawal, leaving tens of thousands of vulnerable people entitled to resettlement in the United States with little chance of escape. In response, volunteers—many of them veterans, reservists, or active-duty military—developed sprawling, loosely interconnected rescue networks with miraculous speed. They scrambled for donations, tracked down charter planes, and enlisted old friends in Kabul to help guide at-risk Afghans onto evacuation flights. It’s difficult to know the extent of the work, but organizers say that thousands of Americans are involved.

Most of the volunteers have concentrated on the problem and promise of Hamid Karzai International Airport. As soon as Kabul fell to the Taliban, on August 15th, thousands of people rushed there: U.S. citizens, holders of green cards and special visas, young men who had no documents but were desperate enough to try their luck. The result was a miserable carnival of stampedes and shoot-outs and sewage that flooded the streets. Marines fired tear gas to try to quell the mob and closed down the gates in seemingly random patterns.

“The gates are like a terrible game of Whac-A-Mole,” Adam DeMarco, an Army veteran who, with a group of West Point graduates, engineered the evacuation of a handful of Afghan alumni and their families, and also other allies, said. “Some open. Some don’t. The times fluctuate.”

Last Monday, as the August 31st deadline to complete the evacuations drew near, the U.S. said that it was prioritizing citizens and green-card holders; on the ground, troops and State Department officials turned back S.I.V. applicants at gates and checkpoints. Another terrible twist came a few days later, when the Taliban announced that Afghan nationals would be barred from approaching the airport. The White House press secretary, Jen Psaki, assured reporters that S.I.V. applicants would still be able to leave. The Biden Administration, she said, had instructed the Taliban to allow Afghan allies to pass through the checkpoints. But that statement took on a troubling cast when Politico reported that U.S. officials had given the Taliban a list of names, including those of vulnerable Afghan allies.

People in the airport were being put on planes, but that was hardly the whole story. Some charter planes took off with row upon row of empty seats. Afghans might be saved if they could reach the airport, but, by and large, they couldn’t get there.

Sitting alone in the kitchen of the Boone office, looking disoriented, almost woozy, was a man who preferred to give his first name only: Nazar. A thirty-six-year-old who had started translating for U.S. troops at seventeen, Nazar had touched down in the United States that day, after an anguished escape from Afghanistan. His long-anticipated flight had come at a steep price: he’d left behind his wife and his three children, all of whom are under seven, for the simple but immutable reason that he couldn’t get them through the crush of people to the airport gates.

The whole family had secured U.S. visas and commercial plane tickets to fly out on August 17th. Two days before that, the Taliban seized Kabul, and the flight was cancelled. The family stripped their packed luggage down to a few backpacks and tried to approach the airport, suffering for hours in crowds so tight that Nazar’s wife told him she was suffocating. They returned home and tried again the next day, but the crowds had only thickened. Finally, outside the airport, they made an excruciating decision: Nazar would travel alone, in hopes that he could get the rest of the family out later.

Nazar described passing through checkpoints where Taliban guards cursed him as an infidel and whipped people with chains, and being hit with tear gas by U.S. marines. Gun battles erupted; his left thigh was grazed by a bullet. He saw an amputee getting trampled on by the crowd and a man weeping for his children, and he was ashamed because he’d moved past all that desperation and shoved his way into the airport.

“I’ve seen hell with my eyes,” he said quietly.

Zeller was nineteen on September 11, 2001. He came from a line of veterans stretching back to the American Revolutionary War; he enlisted, he said, because both his family’s history and the terrorist attacks imbued him with a sense of obligation to his country. “I bought into it. I really believed we could make a difference. And it turns out . . .,” he trailed off. “What you realize is, you come home, and you don’t come back the same person. I wasn’t prepared for any of that. And I don’t think you really can be.”

He said, of the years he’s spent trying to deliver Afghan allies to safety, “I feel like this is atoning for all the shit that I did previously.”

For many veterans of the post-9/11 wars, leaving their allies behind is a deep, even intolerable, wound. Many describe a reaction that is graver than anger or sorrow; they talk about the personal shame of having betrayed the men and women who served with them, an act that is anathema to their military training and ethos and, more broadly, undercuts the values they thought they were defending.

“Do you understand what it’s like to have people send you messages saying, ‘You promised me you’d get me out,’ ‘I’m being hunted,’ ‘You can’t get me out,’ ‘Why are you betraying me?,’ ‘You left me behind’?” Zeller said. “Imagine now it’s someone you served with and there’s nothing you can do about it.”

In the early years of No One Left Behind, Zeller said that he found his staunchest supporters among Vietnam veterans, who still bore the scars of having abandoned their own allies. Zeller recalled that when he was lobbying lawmakers over problems with the S.I.V.-application process, in 2013, John McCain erupted angrily that it was going to be “another Vietnam.” For years, McCain led efforts to increase the number of S.I.V. visas. “Isn’t it unconscionable for us not to allow them to come to the United States if they want to,” he once said, “after what they did for us?”

“When we go over there in these small teams, we tell the people we work with, ‘You can trust us. We’ll be there for you.’ How many people have we looked in the eyes?” George Adams, who fought in the Middle East and Africa, said. “This is going to be a huge mental-trauma disaster for the military.”

Adams was working with vulnerable Afghans this past weekend, focussing on a few families of Afghan-American service members who remain trapped in the country. He’d already had to accept that he would not be able to evacuate the elderly parents of a U.S. reserve-services member, and he had started talking to them about strategies to stay safe for the time being.