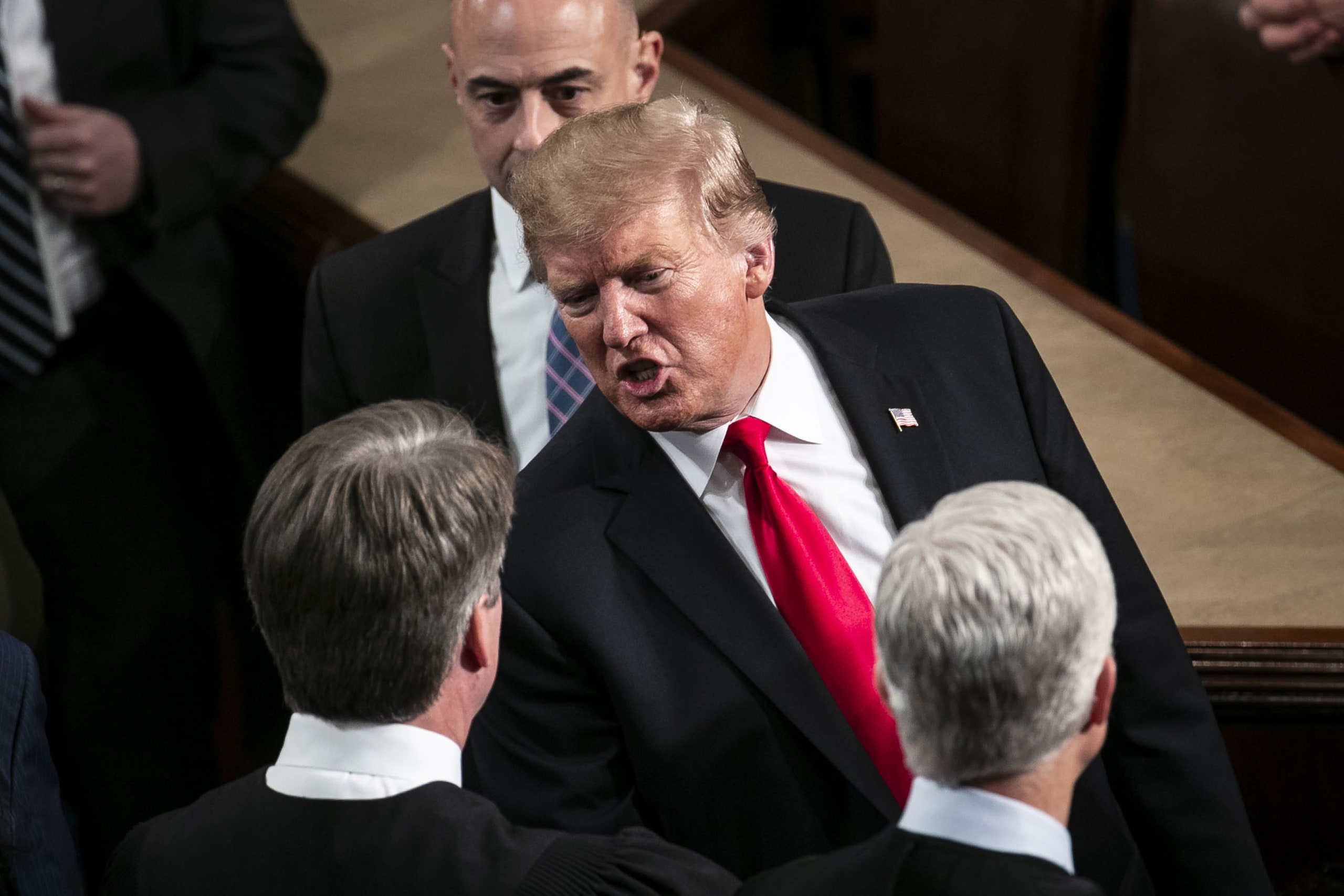 In a bland, single-sentence order on Thursday, the Supreme Court rejected a request from former President Donald Trump that the country’s highest tribunal intervene in the legal fight over the documents seized from his Mar-a-Lago home. The ruling came on the same day that the House select committee investigating the January 6th insurrection subpoenaed Trump to testify before Congress about his actions that day. Trump reacted by issuing a four-page statement, with a ten-page appendix, that falsely claimed that the 2src2src election was “Rigged and Stolen,” called the committee members “highly partisan political Hacks and Thugs,” and threatened revenge. “The people of this Country will not stand for unequal justice under the law, or Liberty and Justice for some,” Trump wrote. “Election Day is coming. We demand answers on the Crime of the Century.”

The former President’s Supreme Court loss was no surprise. Legal analysts had said the Court would likely reject his request that his lawyers be given access to the hundred and three classified documents that Justice Department officials considered the most sensitive among the roughly eleven thousand retrieved. His lawyers also argued that the federal appeals court that recently ruled against Trump lacked the jurisdiction to do so. “Trump is asking the Supreme Court for relief so small as to make it almost difficult to describe, and he’s doing it based upon an incredibly technical legal argument,” Steve Vladeck, a law professor at the University of Texas, wrote, before the Court issued its ruling. “Simply put, because his lawyers are (smartly) sticking to plausible legal arguments rather than the conspiratorial fantasies of their client and his supporters, the Supreme Court foray is likely to amount to very little.”

So far, Trump’s legal gambits have fared poorly at the Court, even though a third of the Justices are his appointees. The Court rejected multiple Trump-backed challenges to the 2src2src election, and it rejected his request that the January 6th committee be denied access to certain White House documents. Trump’s frenetic search for friendly judges, though, will continue unabated. “I very much doubt it’s the end,” Vladeck told me, earlier this week. “He has little incentive not to try to take each of his losses to the Supreme Court—not because his odds of winning are good but because it helps to both delay and obfuscate the adverse rulings against him in the lower courts.”

Jake Grumbach, a professor of political science at the University of Washington, said that there is a political logic to Trump’s approach. Ceaseless legal battles, from the Supreme Court to federal courts to state and local courts, are a political win-win for the former President. If a judge rules in his favor, he’ll say it shows that the Justice Department and the F.B.I. are persecuting him. If Trump loses in court, he’ll say that judges are persecuting him. Aileen Cannon, a federal judge in Florida whom Trump appointed in his final months in office, has appeared to have repeatedly ruled in his favor, prompting plaudits from the former President’s supporters. On Friday, the Justice Department asked the U.S. Court of Appeals for the Eleventh Circuit, in Atlanta, to overrule one of those decisions.

Grumbach warned that authoritarian leaders have used similar tactics to try to delegitimize their countries’ courts in the eyes of the public—or, at the least, of their most fervent followers. “There is also the political dynamic of a political strongman arguing that he is persecuted, and that the rule of law should not apply to him,” Grumbach said. “This is a common historical feature of authoritarian leadership.” As my colleague Andrew Marantz has written, President Viktor Orbán, of Hungary, has consolidated power not by shuttering the courts but by gradually weakening and discrediting them. His government has dismissed judges who ruled against him as “traitors,” and threatened to fire a judge overseeing investigations into corruption by members of Orbán’s party.

Legal experts believe that court rulings between now and the 2src24 election will play a central role in determining whether the United States emerges from the Trump era or continues down an authoritarian route. The Supreme Court ruled unanimously, in 1974, that President Richard Nixon could not refuse to hand over evidence—specifically, Oval Office recordings—in a criminal investigation during the Watergate scandal. The ruling, which was joined by four Justices appointed by Nixon, helped to insure his downfall. Rulings from at least thirty-eight Republican-appointed judges, including several Trump appointees, that dismissed the former President’s claims that the 2src2src election was stolen played a central role in thwarting his effort to block Joe Biden from taking office. Vladeck argued that the two hundred and twenty-six active federal judges whom Trump appointed—out of a total of roughly eight hundred federal judges—have a key responsibility to defend democracy and the independence of the courts. “This is why it’s so important not only that he’s losing in court but that he’s losing before judges and Justices he appointed,” Vladeck said. “It’s much harder for him to portray himself as the victim of a judiciary that’s out to get him when his very own appointees are joining the decisions against him.”

Last month, two Trump appointees on the Eleventh Circuit Court of Appeals, Judges Britt C. Grant and Andrew L. Brasher, joined a Barack Obama appointee, Judge Robin S. Rosenbaum, in overruling decisions by Judge Cannon that largely halted the Justice Department’s criminal investigation into whether Trump had mishandled classified documents. The three-judge panel ruled that Trump had provided “no evidence” that he had declassified the documents when he was President, and dismissed another of his legal arguments as a “red herring.” Vladeck said the fact that Trump had appointed two of those judges appeared to reduce criticism of the ruling from the former President’s supporters. He added, “It’s hard to believe that, had the Eleventh Circuit panel had a different composition, we wouldn’t have heard a lot more from Trump and his supporters about who appointed the judges and why they can’t be trusted.”

Ilya Somin, a law professor at George Mason University, cited another factor in Trump’s legal setbacks: the claims and positions that Trump and his allies have adopted regarding the 2src2src election and the Mar-a-Lago search have bordered on the legally ludicrous. “In some cases, Trump and his supporters make arguments that are so lame that almost any judge would turn them down,” he told me. Yet court rulings against Trump appear to have had little impact so far on his political base. Despite the uniform rejection of Trump’s false 2src2src election claims, a majority of Republicans, according to opinion polls, do not believe that Joe Biden was legitimately elected President.

Aziz Huq, a law professor at the University of Chicago, said that the courts, no matter how they rule, cannot single-handedly ease the country’s polarization: “In a world where over the last twenty-five years the national political scene has become more polarized, the Court, no matter what it does, is going to be seen as biased on one side or the other.” That is particularly true of the current Court. Earlier this month, a poll found that only forty per cent of Americans approve of its performance. Nevertheless, Huq added, the courts, more broadly, along with universities and the news media, play a vital and constructive role in a democracy by determining basic facts needed for substantive political debate. The courts rule, for example, whether a government policy has proved effective at reducing a public harm, or that an individual is guilty or innocent of a crime, or that a law is constitutional or not. “A standard view of democracy is that it’s not just that you have elections,” Huq said. “You also need a number of institutions that are providing ground truth so we can have a debate about fact.”

David Laufman, a former senior Justice Department official, said that Trump himself represents an existential threat to American democracy. He agreed with Vladeck that it is critical that Trump-appointed judges, particularly those on the Supreme Court, continue to rule against him when merited. He also warned that, if Trump returns to the Oval Office, he will appoint more loyalists to the courts. “I can’t think of anything that would be more corrosive to American democracy than when the judiciary is used as a political weapon instead of being a neutral arbiter of fact that rules without fear or favor,” Laufman said. “We might survive the damage of the last four years, but if we had four more years of Trump appointing judges, including Supreme Court judges, we would be toast.” ♦