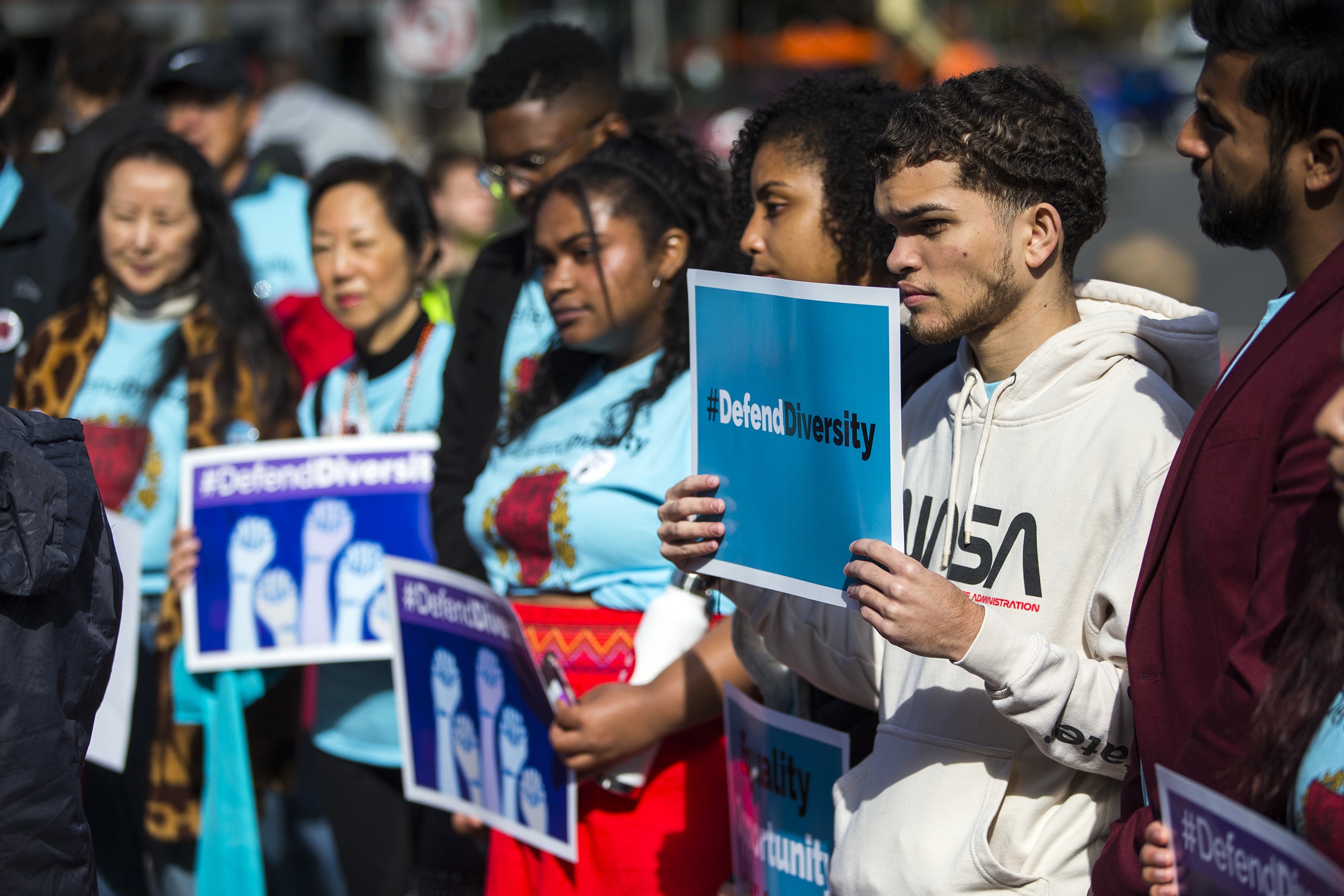 Opponents of affirmative action in university admissions couldn’t possibly have had better news than the Supreme Court’s announcement on Monday that it will hear two cases organized by Edward Blum, the anti-affirmative-action crusader. The first, a lawsuit against Harvard alleging that it discriminates against Asian American applicants, was unsuccessful in federal district court in Boston, and unsuccessful again in the First Circuit Court of Appeals. It’s hard to imagine that the Supreme Court took the case because it wanted to affirm the lower courts’ rulings. The second case, a suit against the University of North Carolina, was similarly unsuccessful in federal district court. The Supreme Court took the highly unusual measure of short-circuiting the next step, an appeal to the Fourth Circuit—instead bringing it directly to Washington and pairing it with the Harvard case.

The message is clear: the Supreme Court wants to consider decisively departing from a long string of decisions that have permitted the use of race as a plus factor in admissions. These have been close decisions, made on narrow grounds, usually with a moderate conservative Justice holding the balance of power. Now there are no moderate conservatives on the Supreme Court. Assuming that President Biden will have succeeded in getting a successor to Justice Stephen Breyer seated before the Court hears the case, we can expect a strongly worded 6–3 decision insisting on “color blindness” in admissions, full stop. That would surely invite further legal challenges to diversity programs in every other area of American life: hiring, contracting, grant-making, and on and on. And if the Biden Administration can’t get a new Justice in place before the November midterm elections, it could be an even more lopsided decision.

Universities began using affirmative action voluntarily, and broadly, in the late nineteen-sixties, for a simple reason: to make themselves more racially integrated. The major pieces of civil-rights legislation had been passed, and it instantly became clear that race was not just a Southern issue that would disappear with the end of the formal Jim Crow system. Most of the leading universities were overwhelmingly white. Integration would introduce their students and faculty—very few of whom had ever been with Black Americans as peers and social equals—to the beginnings of a multiracial society, and provide many more Black students with the opportunity to enter all the worlds to which universities provided entrée. Substantially as a result, the country today has a far more multiracial leadership class, and an immeasurably enriched political, cultural, and intellectual life—and a long way still to go.

The idea that, at some point in the past, the country had a broad racial consensus that it abandoned with the advent of affirmative action is a mirage. Every step of racial progress has been intensely controversial: emancipation, the passage of the post-Civil War constitutional amendments, the Supreme Court’s landmark decisions, the civil-rights legislation of the sixties. And every one remained controversial, the object of intense nullification campaigns, after it became law. The Fourteenth Amendment was enacted and ratified, in 1868, despite Presidential opposition, and remained effectively in force for only a few years; the removal of federal troops from the South in 1877, marking the end of Reconstruction, fatally weakened it. It’s conventional wisdom that the ringing, unanimous 1954 Brown v. Board of Education decision was made possible by the death of Chief Justice Fred M. Vinson and his replacement by the more liberal and politically adept Earl Warren, and after the decision came down it provoked a furious reaction. At the 1963 March on Washington, which we remember for Martin Luther King, Jr.,’s “I Have a Dream” speech, the young John Lewis had to be talked out of giving a speech comparing the civil-rights movement to Sherman’s march through Georgia. This is not safe or settled history.

It’s ironic that two of these landmarks, the Fourteenth Amendment and the 1964 Civil Rights Act—which were understood as they were enacted, by their proponents and their opponents alike, as being aimed at African American progress—have been, for half a century, and are now again the basis for legal challenges to affirmative action. In admissions, an added good effect of affirmative action is that it awakened universities’ awareness of other defects in their system, and so helped lead to the increased presence of women, Latinx students, children of immigrants, and children of unprosperous families. But that effect leads to a temptation to misunderstand the main point of affirmative action, which is to be race-conscious. Race wasn’t introduced into admissions as a new factor corrupting an original intent to select on class, or on pure academic performance in high school, or to determine somehow who truly deserves the precious admissions slots. It was introduced to integrate, and it has.

Last month, Harvard accepted the first cohort of the class of 2026—a group that is twenty-six per cent Asian American and fourteen per cent Black. A document submitted by the plaintiffs in the lawsuit now before the Supreme Court, based on internal statistics that Harvard had to release after being sued, includes a simulation of the effect of the kind of “color-blind” admissions that the Court seems likely to mandate. It says, after analyzing several years’ worth of recent data (test scores, academic ratings, personal ratings, extracurricular ratings, and more):

Every lawsuit opposing affirmative action in admissions has used as evidence scores on the standardized tests that universities require applicants to take. Because of persistent average racial gaps on test scores, which reflect deep and long-standing educational inequities, meaningfully increasing a university’s Black student presence requires accepting some Black students with lower test scores than rejected white students. Some of them can then claim to be the victims of racial discrimination. In a very narrow sense, they are: one can’t tell whether a specific applicant would have been admitted absent affirmative action, but admitting more students from any category, at such a highly selective institution, inevitably means admitting fewer from other categories. Both Harvard and the University of North Carolina have temporarily suspended their test requirements and, if the Supreme Court does what everyone expects it to do, those suspensions are likely to become permanent. That would not mean, though, that, after an adverse decision, the universities could simply drop standardized tests and there would be no effect on how many Black students they admit. The lawsuits show universities, swamped with tens of thousands of applicants, quantifying just about every aspect of their applicant pools. No doubt a determined litigant would be able to use numbers that aren’t test scores to make a case that race is still being used as a plus factor in admissions.

Through all the decades of controversy about affirmative action, its opponents have often argued that we should fix the entire American educational system so that affirmative action would be unnecessary. That argument assumes that racial integration as an explicit aim is somehow inherently offensive, and it also proposes an almost unimaginably vast project. It would still be a large undertaking, but less so, for universities to reconsider their tendency to quantify every aspect of admissions in ways that, after the Supreme Court decision, will wind up being in conflict with keeping integration at even just its current, hard-won level. Now isn’t too soon to begin doing that work.