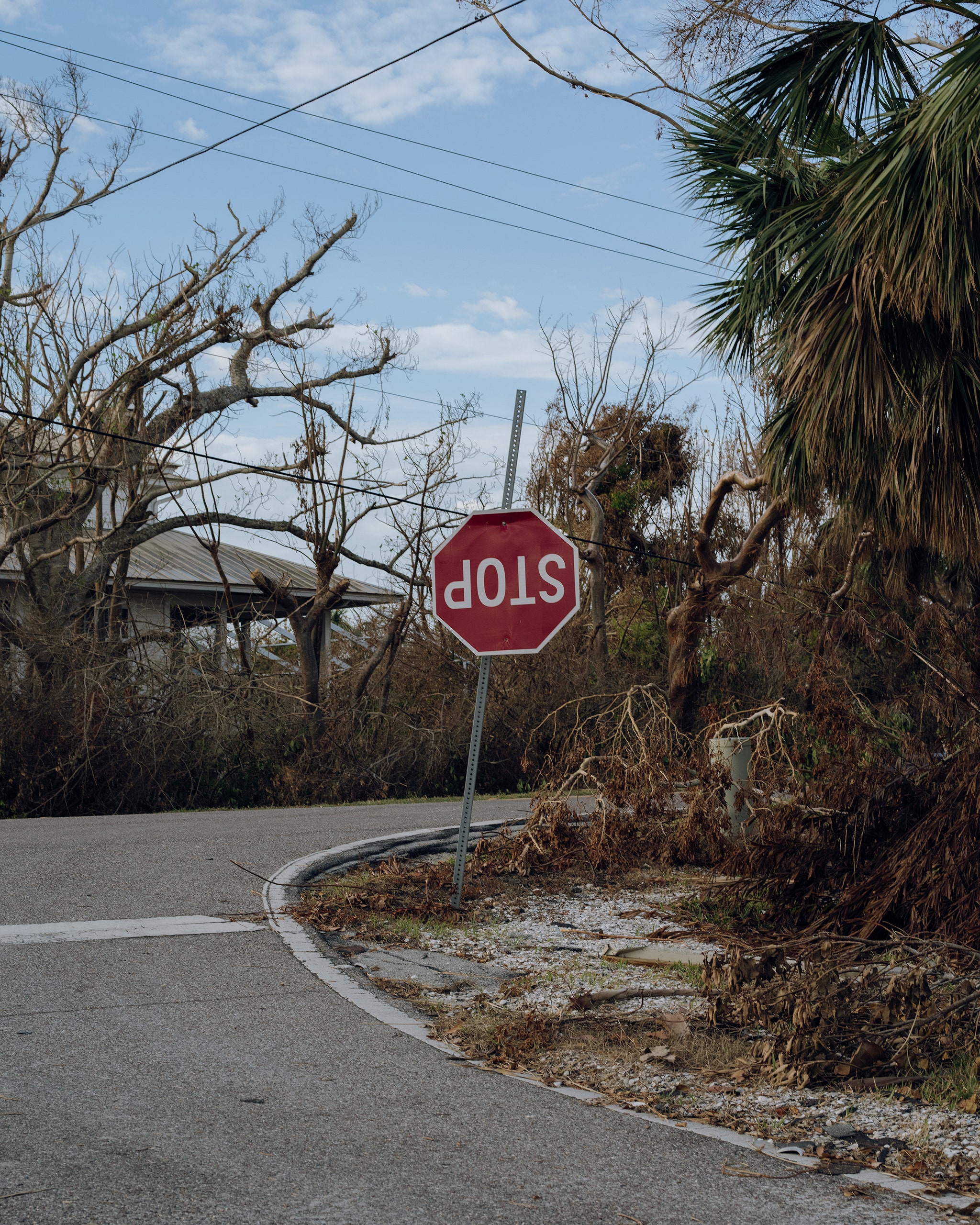 Insurance wasn’t likely to be of much help, Crater said, but he and his wife planned to rebuild. We tore down drywall together, then set out on a bicycle ride around the eastern half of the island. Everywhere we went, fire alarms pinged and chainsaws buzzed. And, around each bend, we found someone Crater knew.

A deeply tanned man in a backward baseball hat and aviator sunglasses was bicycling toward Periwinkle Way, the island’s main drag. He introduced himself as Doug Congress, a C.P.A. and former vice-mayor of Sanibel who has lived mostly on the island since his teens. Like about a thousand other Sanibel residents, Congress and his wife, Melissa, remained on the island during the storm. “I mean, my home is stilted fifteen feet above sea level,” he said. “I have impact glass, one-eighty-five-rated. I’ve got a metal roof that’s only six years old.” He’d lived on the island for nearly thirty years, and evacuating had always turned out to be unnecessary in the past.

At one point during the storm, it looked like Congress’s home might go under. “My wife said, ‘You know what, if we’re gonna die, we’re not dying in that attic,’ ” he recalled. They took six five-gallon water bottles, sealed them up, and wrapped them around a wooden bench. They ended up not needing the raft, but Congress has kept it. “Because I’m gonna come back and put it in the ocean and see if it would have worked,” he told me.

Congress is a car enthusiast, and one of his prize automobiles was ruined by the storm. He asked Crater for advice on how he could get it properly appraised, before explaining to me that this was really the least of his problems. I asked him what he thought the future held for the island. “You build back, I guess,” he said. At the very least, he added, he had to get his house into decent enough shape to rent or sell. But he was worried about what others would do—if a lot of people left, Sanibel wouldn’t be the same. And he worried that it could go bankrupt. “Mel wants to move to the mountains,” he said. “But we’ll see.”

“This is the future of Sanibel,” Crater said, stopping his bike a few minutes down the road and pointing to a house on our left. It was a medium-sized home with a metal roof, Hardie-plank siding, and hurricane-rated windows. It sat on ten-foot stilts. The area beneath the home had not been walled in. “This isn’t rocket science,” Crater went on. “It’s building to code, following it strictly. We can coexist with the ocean.” He guessed that about one per cent of Sanibel’s homes currently fit this model.

Two men approached on foot as we headed around the next bend, past a home that had floated off its foundation. “I’m flood-adjusting,” Gage Crowder, the younger of the two, told me. Crowder, an insurance man, lives in Texas, and saw things after Hurricane Harvey inundated the Houston area, but said the damage from Ian in Fort Myers was the worst he’d ever seen. I asked his colleague about rebuilding on Sanibel. “The best practice is to elevate it,” he said, referring to the houses on stilts, “but they’re always gonna box them in. They want to use the space. These people got money.”

“They got ‘screw-you money,’ ” Crowder said. “Corvettes, Stingrays, sports cars—they’re all around here in some of these houses.”

Crater and I pedalled until we happened upon two police officers who’d just come from the neighborhood where my grandparents used to live. I asked the officers how it looked; they shook their heads. As we spoke, a golf cart approached carrying a woman in leggings and muck boots—it was Sanibel’s mayor, Holly Smith. “I literally thought it could have been someone looting,” she said, referring to Crater and me. Smith, who has held various civic positions on Sanibel for more than a decade, was almost impossibly upbeat. “How far we’ve come is extraordinary,” she said, adding that the important thing was to build “the Sanibel that everybody wants to come back to.” She added, “Will there be tweaks? There might need to be.”