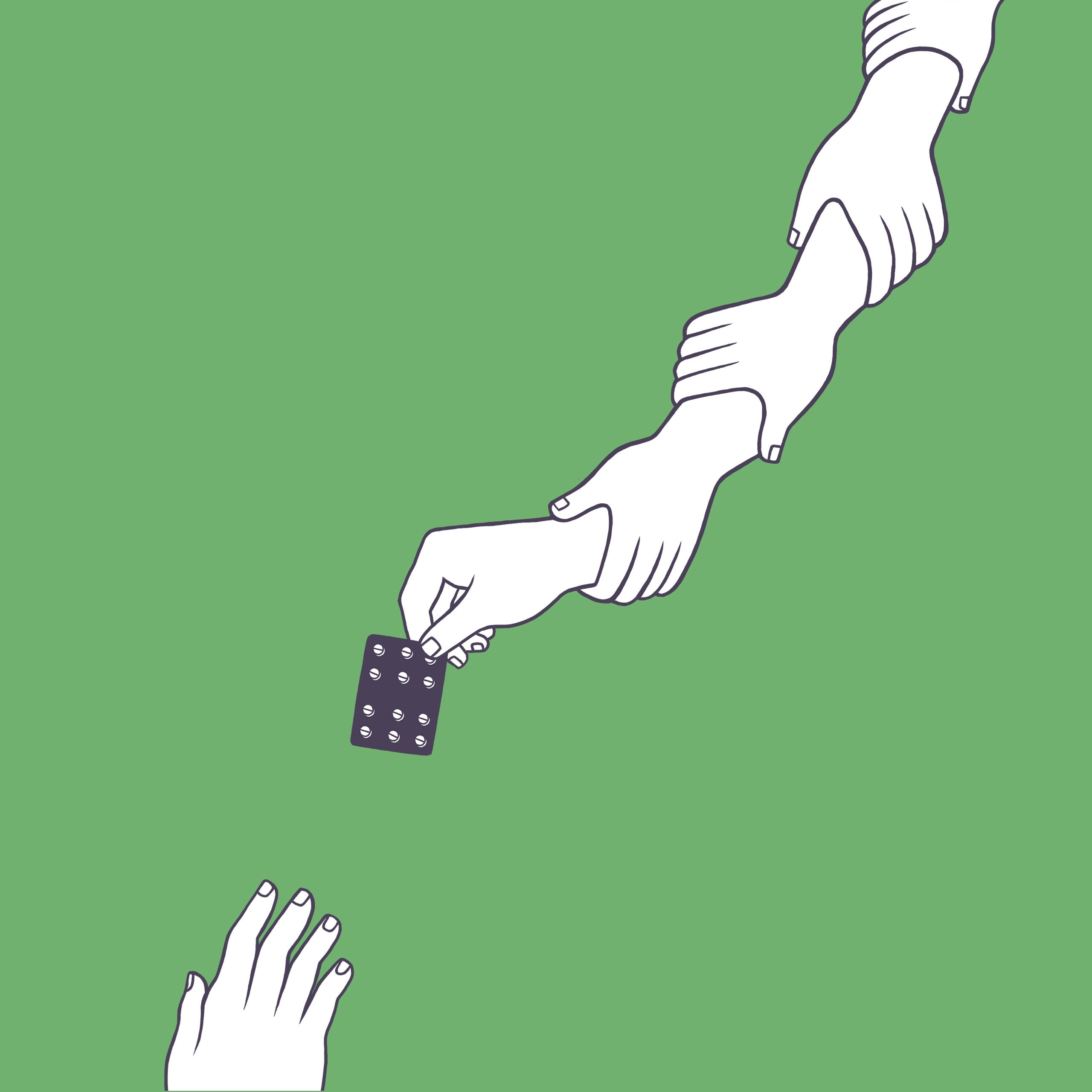 The handoff was planned for late afternoon on a weekday, at an underused trailhead in a Texas park. The young woman carrying the pills, whom I’ll call Anna, arrived in advance of the designated time, as was her habit, to throw off anyone who might try to use her license plates to trace her identity. She felt slightly absurd in her disguise—sun hat, oversized sunglasses, plain black mask. But the pills in her pocket were used to induce abortions, and in Texas, her home state, their distribution now required such subterfuge, along with burner phones and the encrypted messaging app Signal. Since late June, when the Supreme Court overturned Roe v. Wade, Texas and thirteen other states had effectively banned abortion, and more were sure to follow. In some of the states, laws that originated as far back as the nineteenth century had been restored. Providing the tools for an abortion in Texas had become a felony that could lead to years in prison, and a fellow-citizen could sue Anna and collect upward of ten thousand dollars for every abortion she was found to abet.

Anna wasn’t a fainthearted woman—someone who had recently approached her for pills noted her “cottage-core vibes” and steely calm—but she wasn’t reckless, either. She and other women defying abortion bans had turned to a model developed by Verónica Cruz, a prominent Mexican activist. Until last year, abortion was considered a crime in most of Mexico, the second-biggest Catholic country in the world, and women there had become adept at providing safe abortions in secrecy. (Given the legal exposure, pseudonyms have been used for Anna and other American women who let me into their underground networks.)

By the time the pregnant woman for whom Anna was waiting walked up, the trailhead was quiet enough to make the chirping of birds seem jarring. As Anna pulled a plastic bag of pills from her pocket and settled across from the pregnant woman at a picnic table, she registered the fear on the woman’s face. Her distress, as Anna understood it, was less about a breach of Texas law than about the possibility that her husband, who was violent, might find out what she was doing. Hands shaking, the woman told Anna that she was already raising three children and had been trying to save enough money to remove them from a dangerous home. The prospect of having another child, she said, was like “getting a death sentence.” She couldn’t vanish from her household for a day without explanation, travel to a state where abortion is legal, and pay seven hundred dollars to a doctor for a prescription. Anna’s pills, which were free, were her best option. Taking the baggie and some instructions on how to take the medication, the woman thanked Anna and fled the park, hoping that her husband would never realize she’d been gone.

The town of San Miguel de Allende, in central Mexico, is known as the birthplace of legendary independence leaders. It is just as famous for its charm: cobblestone streets, Baroque churches, bright houses, and lively cantinas once frequented by Mexican muralists and Beat poets. Some Americans visit for a week and decide to stay. Among those expats is Liz, a retired Southern woman in her seventies. On the morning of June 24th, as she was making coffee in a kitchen where photographs of her great-grandchildren covered the fridge, she heard on the radio that the constitutional right to abortion in the United States had ended. She maneuvered her walker to a nearby chair and sank down. She felt as she had as a child, in a house by the sea where she’d once lived, when a hurricane she’d been dreading made landfall. It was awful, yes, but knowing what was coming had given her a chance to gather her courage and make a plan.

Five years earlier, Liz had met Verónica Cruz, who runs a nonprofit called Las Libres—the Free Ones—out of the city of Guanajuato, some fifty miles west of San Miguel. At the time, Cruz was defying Mexican law by helping women—mostly poor women—abort at home. In part because activists like Cruz successfully reduced the stigma of abortion, the Supreme Court of Mexico decriminalized it in September, 2src21. That same month, Texas moved in the opposite direction: a state law known as S.B. 8 banned nearly all abortions past the sixth week. Since then, Cruz had widened her remit, supplying free abortion pills to undocumented women in Texas.

Liz figured that, with Roe overturned and states from Arkansas to South Dakota implementing abortion restrictions, the demand for Mexican abortion pills would soar. If she lacked Cruz’s decades of experience working on the cusp between the lawful and the criminal, she was neither too old nor too diminished to take a risk. She picked up the phone to call Cruz and then some friends, to find out which of them would be game to join an underground network.

Locals called expats like Liz “the Old Hippies,” in English. In early July, weeks after the U.S. Supreme Court’s Dobbs decision negated Roe, six of them joined Liz on her terrace for hibiscus tea and a talk with Cruz. Most of the Americans were over sixty and recalled what life was like before the 1973 Roe ruling. One tactic Liz remembered for ending an unwanted pregnancy was to alternate between a tub of ice-cold water and a tub as scalding as you could bear it. Those who tried this method suffered, then usually had a baby anyway. Liz had a baby, too, as a teen-ager. Although she had cheered when the Roe decision was announced, knowing how many lives it would change, it had come too late to change hers.

Cruz, the fifty-one-year-old daughter of farmers, has appraising dark eyes and a booming voice, and is direct by nature. She asked the Old Hippies if they would raise money and buy pills in Mexico that would be distributed across the border. Cruz paused to let an Old Hippie translate for those whose Spanish was weak.

Medication abortion in the United States is typically a two-day process that involves taking mifepristone, which blocks progesterone, and misoprostol, which causes uterine contractions. The Food and Drug Administration approves the use of this two-pill regimen under a doctor’s supervision up until the tenth week of pregnancy. A prescription, which can be obtained in states where abortion is legal, is required. In Mexico, Cruz explained, misoprostol is sold over the counter. Mifepristone still requires a prescription, but Cruz had found suppliers, and when she ran short she relied solely on misoprostol, which can cause an abortion on its own.

Immediately after Dobbs, Cruz said, her existing crew of volunteers had slipped enough medication across the border to help two thousand American women have abortions. If the Old Hippies agreed to aid distributors in abortion-ban states, Cruz told them, Las Libres could help many more women. Each cell in the supply chain would know little about the other cells—safer for everyone that way.

Several Old Hippies wondered aloud about consequences, as the legal terrain was decidedly unsettled. In Louisiana, anyone who “knowingly performs” a medication abortion is subject to a five-year prison sentence and a fifty-­thousand-dollar fine. In Oklahoma, it’s a ten-year sentence and a hundred thousand dollar fine. More such laws were likely to come, although no criminal convictions had yet been reported. If charged, an Old Hippie told Cruz, they might end up at the mercy of a district attorney in, say, Mississippi, facing years of jail time. But Liz was an optimist—“You have to be,” she always said—and by meeting’s end everyone in the room had signed on to her plan.

To avoid what Liz called the “gringo price,” she recruited her housekeeper to call more than two dozen pharmacies in San Miguel and find out what they had in stock, at what cost. Then the Old Hippies tried to buy all the pills they could. One pharmacist agreed to sell more than a hundred boxes but cancelled the order at the last minute without explanation. A second pharmacist demanded a prescription for misoprostol, something not required by Mexican law; an Old Hippie had to persuade her doctor to prescribe it for an ulcer, a condition that she didn’t really have but for which the drug was also used. It was a relief when a third pharmacist agreed to sell more than a hundred and fifty boxes with no questions asked.

Many of the pickups were handled by Diana, another Old Hippie, who at pharmacies gravitated to younger female clerks—less judgmental about her purchases, perhaps, than older men. On the day that she unpacked the last of the hundred and fifty boxes on her kitchen counter, she burst into tears. Every box contained more than enough pills for two abortions, and she saw in the stockpile before her hundreds of younger women who would be helped. “All of a sudden,” Diana said, “I realized what we’re all doing.” Those boxes just needed to get to the States, but that part of the relay would be left to others, as Diana, Liz, and other Old Hippies planned their next buy.

Six weeks later, sitting at a long table in a house on a hill in Guanajuato, Cruz counselled a woman in Georgia by phone while responding to a text from Arkansas: “I would like help with a medication.” A window behind Cruz overlooked a lemon grove, and around the table were colleagues—some social workers, some lawyers, most of them young—fielding questions from pregnant women on both sides of the border. The atmosphere was convivial, and taped on one wall was a phonetic cheat sheet for those with limited English: “Jai, dis is Las Libres. Can ay jelp iu?”

Cruz’s work had long been funded by American nonprofits, and after Dobbs the phone number of her organization was passed around by informal networks of activists. Cruz said that she was now getting fifty requests a day from the U.S. for abortion pills. Some women created fake profiles on Instagram to get in touch with her, or sent messages on WhatsApp or Signal, or called her in the middle of the night.

The evasiveness and fear that she sensed when communicating with Americans reminded her of how Mexican women spoke of abortion when she was growing up. Her mother worked on a farm, harvesting corn, and the only way she and her girlfriends alluded to abortion and miscarriage was with the expression malas camas—“bad beds.” Such euphemisms were necessary in part because women in the state of Guanajuato could face up to three years in prison for ending a pregnancy, and so could the medical personnel who assisted them. Before last year’s Mexican Supreme Court decision, abortion, in all cases except for rape, was deemed a criminal act in Guanajuato, where state law presumed that life began at the moment of conception. There is no reliable estimate of how many women died annually from secret abortions; authorities and family members often blamed the deaths on infection or hemorrhage.