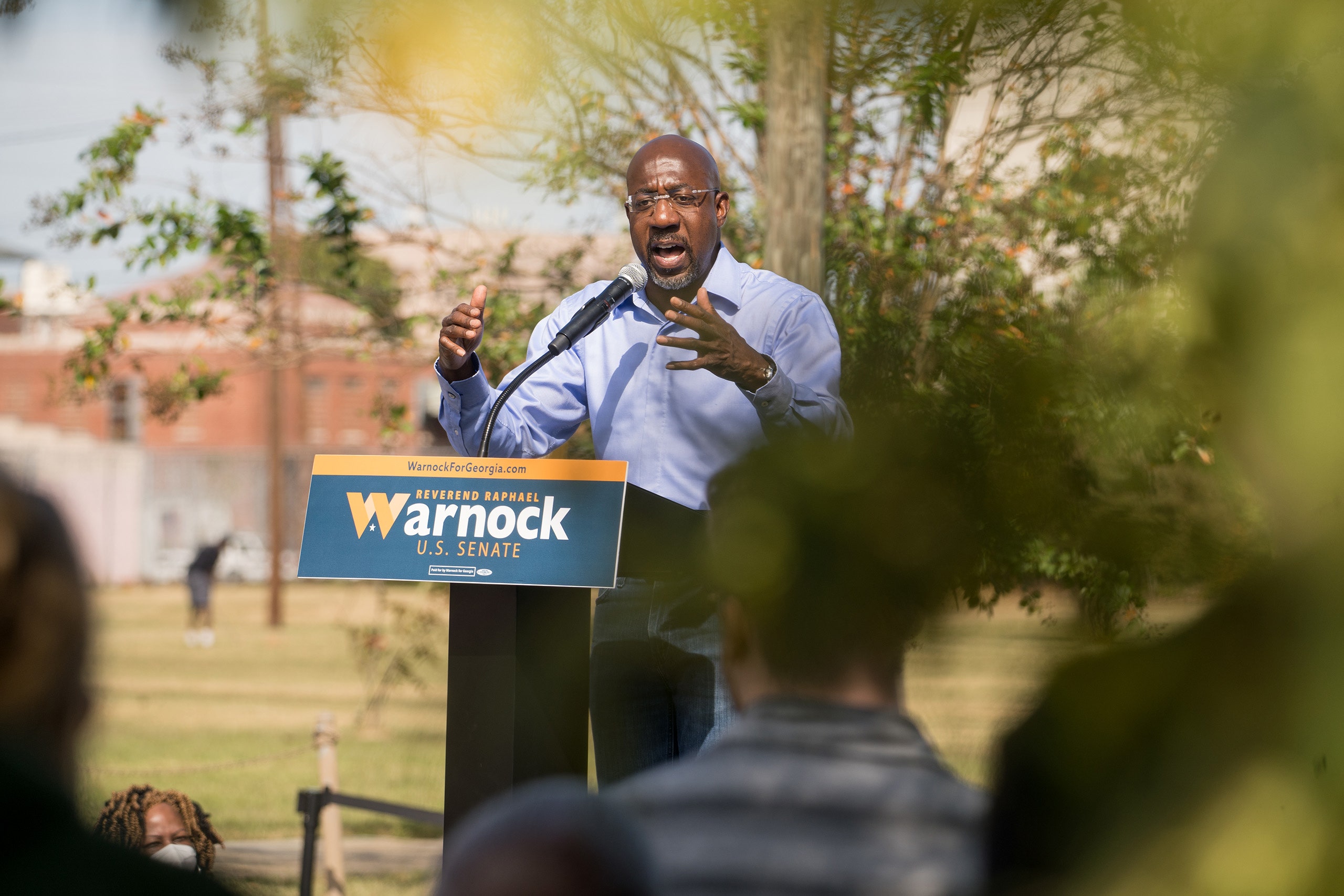 Most of politics isn’t oratory. The number of politicians who have an ornate twenty-five-minute speech prepared about the arc of the American experience vastly exceeds the number who will ever deliver one. Even so, when an orator presents himself, it tends to attract attention. Recently, at a campaign rally in rural Midway, Georgia, Raphael Warnock took note of a magnificent oak tree “with Spanish moss,” he said, “bending and beckoning the lover of history and horticulture to this magic place.”

It was nearing dusk, and the sky was lit in pink and orange. Warnock was standing on the steps of Dorchester Academy. During segregation, the school was for Black students only and had also served as a training center for civil-rights activists, where “they taught you what to do when they set the dogs on you,” as a rally attendee, a retired soldier named Gil, described it to me. One of the speakers who introduced Warnock, the state representative Al Williams, had marched at Selma. There was an audible shuffling of chairs; the audience members were still taking their seats. Warnock had mentioned the oak tree largely to fill time.

“I’m a pastor,” Warnock went on, once everyone had settled in. Since 2srcsrc5, he has occupied the pulpit at Ebenezer Baptist Church, in Atlanta, where Martin Luther King, Jr., was baptized and where he preached until his death, in 1968. “I’m used to walking with people when they are in their lows and in their highs. I’m used to standing there with parents as they bless their babies. I’m used to standing there marrying couples, and speaking words of comfort when a loved one is sick, or standing there in some damp cemetery having to say farewell.” The gospel “compels us to speak on behalf of the marginalized members of the human family,” Warnock continued. “It is that work that got me here in the first place. What I’m trying to say to you is I’m not in love with politics. I’m in love with change.”

Warnock is still relatively new to politics, having won his first campaign, in January, 2src21, to fill the last two years of a Senate term, and he now holds only a slight lead in a reëlection campaign that he still may lose. But he has shown an ability to strike notes that Democrats have not struck for a very long time. In July, 2src21, Warnock delivered a speech in the Senate chamber about voting rights which moved his colleague Senator Cory Booker, of New Jersey, to tears. Warnock had called democracy a “political enactment of a spiritual idea, that we are all children of God, and therefore we all ought to have a voice in the direction of our country and our destiny within it.”

What captured Booker’s attention was Warnock’s straightforward invocation of faith, which can sound different than the modes of political speech that have dominated the Democratic Party since the ascent of Barack Obama. “Obama was this gifted intellectual, like your favorite professor, who could speak to your aspirations, to your hopes for this country,” Booker said. “But the difference I think with Warnock is—you feel his soul first. He is unapologetic in his rooting in faith.”

On the campaign trail, Warnock almost never mentions Trump or the MAGA movement. He favors policies that are modest, discreet, with some tangible benefit for ordinary people: the fourteen-hundred-dollar checks of the pandemic, a bill he sponsored to cut the cost of insulin for people on Medicare, the expansion of Medicaid. He often boasts about the unlikely pairings that he has made with Republican co-sponsors. His rhetorical move is to insist that these small-seeming, noncontroversial policies carry a bigger meaning. “There is a road running through our humanity,” he said at one campaign stop, to make a case for an extension of Interstate 14, which connects red and blue parts of the South, and which he worked on with Senator Ted Cruz. A favorite riff begins, “I believe that infrastructure is spiritual.”

Warnock, a pastor for a working-class congregation, is making a case that Democrats have long wanted to make: that the Christian tradition worth upholding in politics—to find Jesus in “the dark corners, in the alleys, in the gutter,” as Booker put it—is the one associated with King. But it is a complicated bargain to strike, one that blurs the lines of a church, a moral movement, and a power-seeking political party. “The Democratic Party, in an effort to be inclusive, has sanitized their faithfulness, and left that purview to be claimed by the Republican Party,” Booker said. “I’m hoping the Democratic Party can move more towards Warnock.” He added, “We need more poets in politics.”

Politicians are said to govern in prose and campaign in poetry, but in Warnock’s case it has been something like the reverse. His first political campaign was dominated by former President Trump’s challenges to the legitimacy of the election in Georgia. His second campaign has been drowned out by the chaos of his opponent, Herschel Walker, a retired football star who had been a legend at the University of Georgia, and a favorite of Trump’s. Walker had been seen as a dicey candidate in the first place, because he had written an autobiography discussing his experience with dissociative-identity disorder (formerly known as multiple-personality disorder), and Walker’s ex-wife had said that he had once held a razor blade to her neck while threatening to kill her. During the campaign, it turned out that Walker had fathered at least three children whom he had previously not acknowledged, and was also prone to bizarre statements, repeatedly insisting that action to stave off climate change was futile, because any “good air” the U.S. generated would be replaced by “bad air” which would “move over” from China. Amid these hurricanes, in a state which until 2src2src had not voted for a Democrat for President in a generation, Warnock has often campaigned with the extreme discipline of a man aware that he has a relatively narrow path to an extraordinary amount of influence and power.

As Warnock was beginning a tour through southern Georgia earlier this month, the news broke that Walker had allegedly paid for an ex-girlfriend’s abortion, despite Walker having often expressed an extreme anti-abortion stance. After Warnock’s first event, in Savannah, a semicircle of reporters waited expectantly, some scripting questions in note-taking apps—always a slightly ominous sign. Warnock approached cautiously. An NBC correspondent asked whether Herschel Walker could be trusted to tell the truth. Warnock said, “That’s not up to him or me—it’s about the voters of Georgia.” A Yahoo reporter tried, admirably: Walker’s abortion scandal and the allegations of domestic violence against him were pretty stark, but voters had not seemed to break with him—why? Warnock said, “I’ll let the pundits do the punditry.”

Warnock is always a controlled presence, but he was speaking especially quietly, especially slowly. I had the impression of a home printer, just turned on, which proceeds to check the paper supply, ask for a refill of magenta ink, spin its rollers—anything to cordially postpone the task at hand. Eventually, he allowed that the allegations against Walker were “disturbing,” but even then he veered back to his campaign’s theme, of his own preparedness to do the job: “This election is about who is ready to represent the people of Georgia.”

It seemed to me that we were watching something slightly unnatural: a candidate suited for an idealistic era in politics trying to pass through the vortex of a cynical one. From within the sweaty scrum, I asked Warnock, “Wasn’t there a moral component to this?” Warnock turned toward me. “My opponent,” he said, “wants a nationwide ban [on abortion]. That would include rape, incest, and the life of the mother. And I think that raises some very”—he paused—“thorny moral questions. And those decisions ought to be left squarely in the hands of women and not politicians.”

We were standing in a church parking lot about a block and a half from where Warnock had grown up, in the red-brick projects of the Herbert Kayton Homes, in Savannah. (He had seen a woman he recognized from his youth and called out to her, “From the red brick.”) The Mayor, Van Johnson, a Black man in his early fifties, roughly Warnock’s own age, had given a warmup speech, and later I asked him to sketch a bit of life in the city. “O.K., sure. . . . Obviously, Savannah is a majority African American city, intergenerational poverty, exemplified by these housing projects,” Johnson said, of the Kayton Homes. “But also an indomitable spirit, of people who want to do better and raise their families in spite of their circumstances.”

Warnock’s father was both a preacher and “a junkman,” Warnock said from the podium. “He would pick up broken-down cars in his truck” during the week, and, “on the weekend, he lifted up broken people.” Warnock was the eleventh of twelve children and the first in his family to graduate college. While studying at Morehouse College, where his tuition exceeded his father’s annual income, Warnock had caught the attention of Lawrence Carter, a professor of religion, who, among other achievements, is the dean of the Martin Luther King Jr. International Chapel. Carter remembered Warnock as a skinny, studious young undergraduate who was writing a proposal for the office of the governor of Georgia. Warnock’s main interest was in preaching, and Carter recommended him to the Sixth Avenue Baptist Church, in Birmingham, to work for a summer—eventually, the congregation decided to pay for the rest of Warnock’s education. After pursuing doctoral studies at Union Theological Seminary under James Cone, a central figure of Black-liberation theology, Warnock took up a series of posts at churches associated with the tradition of the Black social gospel, where, like King, he was known for political activism. As Carter put it to me, “When you honor the social gospel, it takes you out of the libraries and into the streets.”

Warnock’s doctoral thesis, the basis of a book published in 2src13, was about the divide in the Black church between a pietistic tradition, which emphasized individual righteousness and uplift, and a social one, epitomized by King. By the time Warnock was hired to lead Ebenezer, in 2srcsrc5, strains of the pietistic tradition had consolidated in the new suburban Black megachurches that preached the prosperity gospel, led by figures such as Creflo Dollar and Bishop Eddie Long. (It’s a mark of the depth of this incursion that the 2srcsrc6 funeral of Coretta Scott King took place not at Ebenezer, in inner-city Atlanta, but at Bishop Eddie Long’s church, in unincorporated Dekalb County.) Lerone Martin, who is now a religious-studies professor and the chair of the Martin Luther King, Jr., Research and Education Institute at Stanford, was a graduate student in Atlanta at the time, and he remembers Warnock arguing on local television that the idea that “Jesus wants everybody to be rich just isn’t supported in the Bible.” Martin said, “In Atlanta, which had really become a really prominent land of the prosperity gospel, Reverend Warnock and Ebenezer kind of became a symbol that stood up to say, ‘There’s a different kind of gospel.’ ”