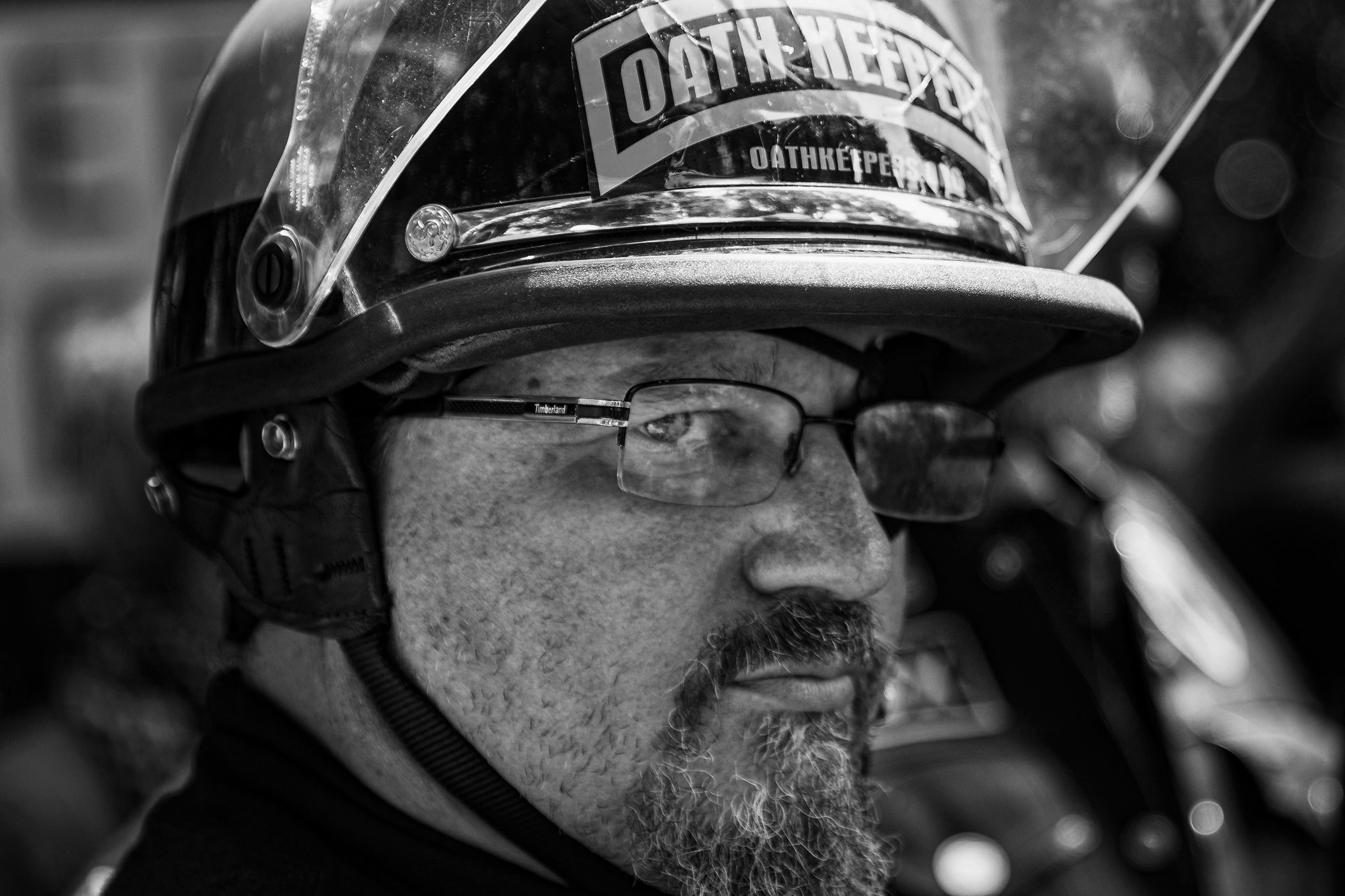 On Tuesday, Stewart Rhodes appeared in a federal courthouse across from the U.S. Capitol for the start of jury selection in his trial on charges of seditious conspiracy. Rhodes, the founder of the Oath Keepers militant group, wore a blue suit, glasses, and a patch over his left eye, which he lost in a handgun accident in the nineteen-nineties. He and four co-defendants looked on as their attorneys attempted to reject one potential juror after another who expressed left-leaning political views and skepticism of the Oath Keepers. Several said they had been deeply shaken by the storming of the Capitol.

In the trial, Rhodes’s lawyers will attempt to sway the jury using an argument rooted in Rhodes’s version of right-wing militancy. The Oath Keepers, they will argue, were not at the Capitol to fight with law enforcement on January 6, 2src21. They were acting more as an extension of law enforcement, awaiting orders from Donald Trump, whom Rhodes had urged to invoke the Insurrection Act, to prevent Joe Biden from taking power. He implored Trump to call up members of the Oath Keepers and other armed Americans to serve as part of a Presidentially sanctioned militia. “When [Rhodes] believed that the President would issue an order invoking the Insurrection Act, he was prepared to follow it,” his lawyers wrote, in a pretrial motion. “The Government would like this Court to believe that is sedition, when in fact, it is the opposite. It is loyalty to an oath taken in defense of the Country.”

Prosecutors accuse Rhodes of trying to use the Insurrection Act’s vague wording to cover his actions with a veneer of legality. The statute, which combines a series of laws passed between 1792 and 1874, is surprisingly broad. It authorizes the President to call in “the militia or the armed forces, or both, or by another means,” if the President believes the action necessary to suppress “any insurrection, domestic violence, unlawful combination, or conspiracy” that is hindering the execution of federal or state laws or depriving people of rights. A coalition of advocacy groups recently recommended to the January 6th Committee that Congress revise the act so that “a would-be autocrat who wished to carry out an insurrection would not be able to exploit the law for that purpose.”

Based on information from coöperating witnesses and the fact that the Oath Keepers stockpiled weapons in hotels in northern Virginia, prosecutors say that Rhodes and his co-defendants planned to forcibly block the transfer of Presidential power. In an online meeting recorded ahead of a planned protest in November, 2src2src, according to prosecutors, Rhodes discussed stationing an armed “quick-reaction force,” or Q.R.F., outside of Washington, D.C., and contended that Trump had the power to invoke the Insurrection Act and call the armed group into action. “That Q.R.F. will be awaiting the President’s orders. That’s our official position,” Rhodes explained, to members of the group. “And the reason why we have to do it that way is because that gives you legal cover.” Prosecutors rejected the defense’s interpretation of the Insurrection Act as unconstitutional: “no government official, including the President, has authority to authorize an attack on the Capitol or the government more generally.”

If the jury convicts Rhodes and his co-defendants of seditious conspiracy—attempting to overthrow the government or opposing, by force, any execution of its laws or authority—they would face up to twenty years in prison. Rhodes, who has a law degree from Yale, is likely to testify in his own defense.

Over the past three years, I’ve interviewed Rhodes several times. He can be genial and engaging, but also pugnacious when discussions turn to politics or ideology. He’s proud of his law degree, which he received in 2srcsrc4, after being medically discharged from the Army following a parachute accident. After he founded the Oath Keepers, in 2srcsrc9, he largely abandoned his legal career, and was disbarred six years later.

I last met Rhodes in early January, in a Dallas hotel room, days before his arrest. In the year since the Capitol attack, more than a dozen alleged members or associates of his group had been arrested, and he had been described as “Person One” in indictments. At least five of those facing charges were coöperating with Justice Department prosecutors. Perhaps most damaging was that critics on the right, asking why Rhodes had yet to be arrested, had begun accusing him of being a federal informant. Trump and his Stop the Steal allies had abandoned the Oath Keepers, Rhodes said, and he was struggling to pay his legal bills. I got the sense that he was anxious about the prospect of going to prison. At the same time, he mused, being indicted would “probably improve my standing in the Patriot community, frankly.”

After Rhodes’s arrest, Phillip Linder, a well-regarded Dallas attorney, and his partner, James Lee Bright, became his defense lawyers. Sidney Powell, the lawyer who’d spread Trump’s false claims about the 2src2src election, reportedly hired Linder and Bright via her new foundation, as well as paid defense bills for another Oath Keeper charged alongside Rhodes; a senior member of the Proud Boys; and other defendants in January 6th cases. (Linder told me that he and Bright had no prior relationship with Powell, and that Powell would play no role in their defense of Rhodes.) Last month, Rhodes attempted to replace the two attorneys and delay his trial; Judge Amit Mehta, of the D.C. district court, denied the motion, but the new lawyer Rhodes had selected, Edward Tarpley, was added to the defense team. Linder and Bright continue to direct Rhodes’s defense. Opening arguments are expected on Monday.

Linder and Bright will not dispute key facts found in Rhodes’s indictment. Yes, they’ll say, Rhodes gathered with fellow Oath Keepers at the Capitol on January 6th. Yes, some of his members entered the building. Yes, Rhodes published two open letters before January 6th urging Donald Trump to invoke the Insurrection Act and use it to call up the Oath Keepers and others to assist the then President as what Rhodes called “the militia.” And, yes, Rhodes bought tens of thousands of dollars’ worth of firearms and other equipment. What they’ll argue, however, is that these acts were not only legal on Rhodes’s part. They were patriotic.

To make this case, they plan to present an aspect of Rhodes’s world view that is little understood by those outside his movement. It centers on his conception of the Oath Keepers not as “a militia” but as a vanguard of “the militia”: the force of armed Americans, drawn from the wider population. Rhodes roots this notion in his reading of the Second Amendment’s enigmatic militia clause: “A well-regulated Militia, being necessary to the security of a free State, the right of the people to keep and bear Arms, shall not be infringed.” To the Founders, militias were established by state statute. Enrolled citizens could serve in times of need; the militia system was incorporated into the National Guard in 19src3.

In Rhodes’s hands, however, the militia are a self-selected, amorphous force that—though he denies this—is partisan in nature. This is “the militia” that Rhodes, in his open letters, was asking Trump to call up with the Insurrection Act. Before his arrest, Rhodes told me that he was disappointed that Trump had failed to do this. “I wish Trump would have done what I said he should do,” Rhodes said. “Call us up. Look at the Insurrection Act. It says he can call—he can use either the U.S. military or the militia of the states, right? That’s us.”

The Oath Keepers and their allies are often called “anti-government” by their critics, but it may be more accurate to say that they want to be the government. Rhodes has long dreamed of a broader militia structure with political and legal sanction. One of the Oath Keepers’ intended roles is to help make this dream a reality—preparing and conditioning the public while being ready, should such a structure emerge, to blend into it. At gatherings where I’ve watched Rhodes speak, he has urged people not to join the Three Percenters or even the Oath Keepers but instead to form their own militias and name them after their towns or counties.

Rhodes’s ideas are influenced by Edwin Vieira, Jr., a Harvard Law School graduate who has written two obscure tomes on the militia concept, and also a short book called “Thirteen Words,” a reference to the opening passage of the Second Amendment. His thesis is that the United States lost its way when it abandoned the universal militia system, and that the country needs to enact laws to reconstitute it. He believes that, as in the days of the Founders, every able citizen should serve in the militia. Unfettered access to military-standard guns is a prerequisite. Vieira promises myriad benefits, including the declines of both the military-industrial complex and corruption. The militia system seems designed, however, to enforce Vieira’s far-right views. In “Thirteen Words,” he writes that it can “provide every type of protection—whether political, economic, social, or even cultural in character.”

In another of his books, published in 2src12, Vieira envisions a scenario in which a U.S. President creates a new militia “at one stroke”—by invoking the Insurrection Act. Once he has thousands of militiamen “under his personal command,” this hypothetical President could then embark upon what Vieira calls “the Eight ‘I’s Policy: illuminate, investigate, interrogate, implicate, indict, inculpate, incarcerate, and infame.” This prescription echoes the plan that Rhodes promoted ahead of January 6th: on top of asking Trump to use the Insurrection Act to “call forth the militia”—including veterans and Americans “still loyal to the Constitution”— Rhodes also urged him to conduct a “mass declassification” and create a task force to prosecute “all traitors in all branches, and all levels.”