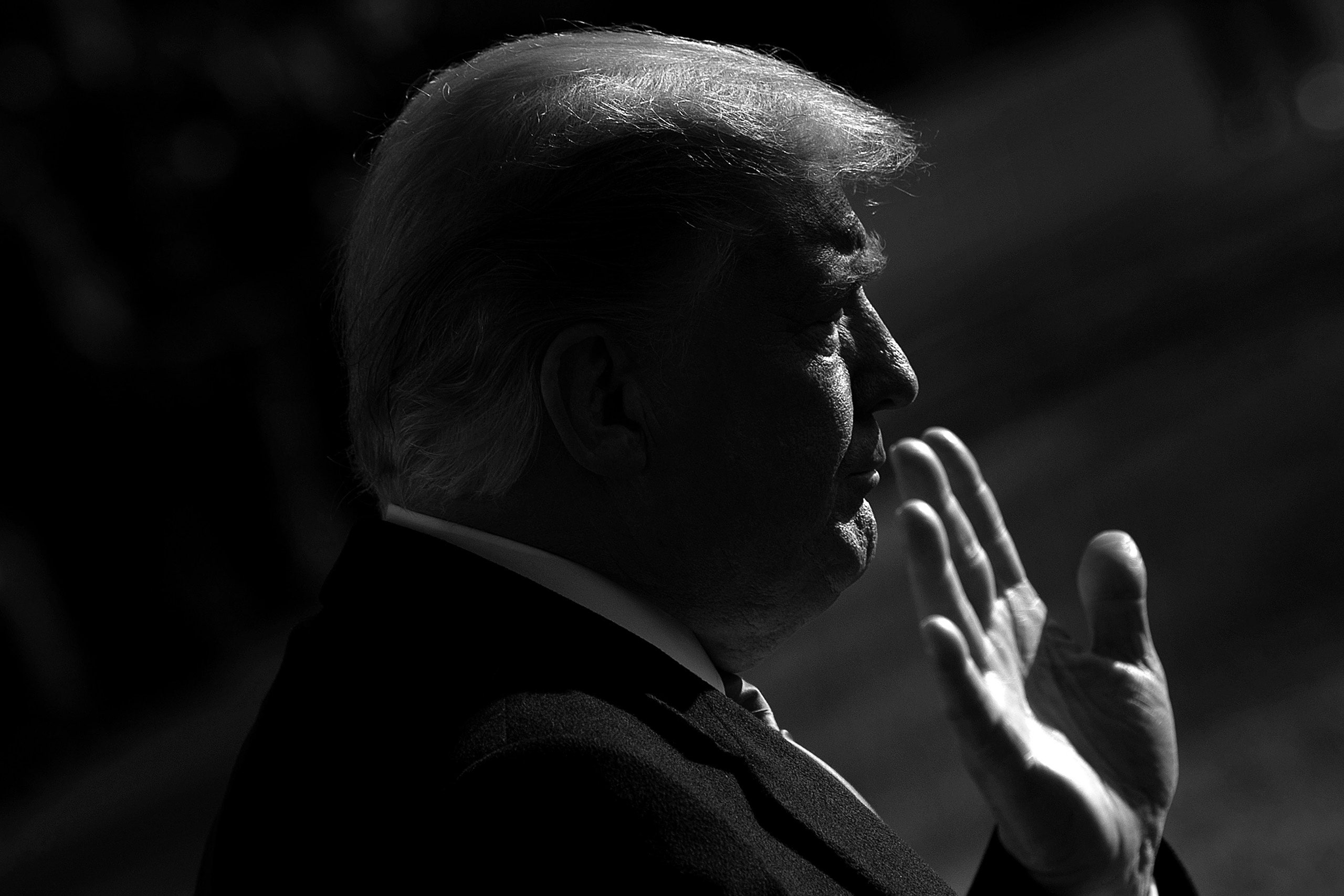 After the 2src2src Presidential election, the judiciary did more than any other branch of the government to defend American democracy. In a remarkable display of legal consensus, according to the Washington Post, at least eighty-six federal and state judges dismissed Donald Trump’s claims of widespread voter fraud. They included judges appointed by Republicans and Democrats, and others who were elected. All told, at least thirty-eight judges appointed by Republicans rejected in some form Trump’s attempts to throw out the results in states won by Joe Biden.

Many of those judges were Trump appointees. Steven D. Grimberg, a federal judge in Georgia nominated by Trump in 2src19, flatly rejected a request to block the certification of Biden’s win in that state, ruling that it “has no basis in fact or in law.” (The Supreme Court, which includes three Trump appointees, also rejected the former President’s claims.) One of the most trenchant legal repudiations came from Wisconsin State Supreme Court Justice Brian Hagedorn, a Republican who had previously served as the chief legal counsel to Governor Scott Walker, when Walker was in office. In a three-page ruling, issued in December, 2src2src, Hagedorn called the petition to throw out every vote cast in that state “unprecedented in American history,” “woefully deficient,” and based on “flimsy” evidence that came “nowhere close” to making its case. The longtime conservative’s ruling included a warning: “At stake, in some measure, is faith in our system of free and fair elections, a feature central to the enduring strength of our constitutional republic.”

On Monday, a Trump-appointed federal judge in Florida issued a jarringly different type of ruling. In a twenty-four-page decision that was a legal and political victory for the former President, Judge Aileen M. Cannon ordered that a neutral third party, or “special master,” review the Justice Department’s seizure of thousands of documents—hundreds of them labelled as classified—from Trump’s Mar-a-Lago home and hotel. While the judge cited “the appearance of fairness” as her primary goal, the ruling served to bolster Trump’s constant claims that he is the victim of nefarious plots. (On Saturday, at a political rally in Pennsylvania, he had called F.B.I. agents “vicious monsters.”) After the decision, he spread conspiracy theories on his social-media platform, claiming that hidden forces—not his own refusal to return the documents—had forced the Justice Department to act. He wrote, “They are being pushed to do the wrong things by many sinister and evil outside sources.”

Legal experts found the ruling alarming for other reasons. Cannon ordered the Justice Department to stop “reviewing and using the seized materials for investigative purposes” until the special master’s review has been completed. Court battles over who should serve as master and, later, whether that person’s review will have been fair could drag on for weeks, delaying the D.O.J. investigation. Prosecutors, who appear to have not yet decided whether to indict Trump for mishandling classified information, likely planned to intensify their probe over the next several weeks. As they would in any criminal case, prosecutors would try to identify people close to Trump who also face legal jeopardy, such as lawyers who signed statements saying that all classified documents had been returned to the government when, in fact, they had not. Prosecutors could subpoena those lawyers and force them to testify under oath before a grand jury. Their testimony could implicate Trump or the lawyers themselves in misconduct. Investigators would also likely try to determine whether Trump showed the classified documents to any visitors at Mar-a-Lago. If they found that Trump did, they would also ask those people to testify before the grand jury, a step that would strengthen a potential criminal case against the former President. All those investigative steps, though, appear to have been delayed by Cannon’s ruling.

In a separate finding, Cannon contends that Trump may have the power to block prosecutors from presenting certain documents in court because they are protected under executive privilege. Legal experts maintain that past Supreme Court rulings show that the power to assert executive privilege exists only with the current President, not former ones. William Barr, who served as Trump’s Attorney General but broke with him over his false claims of 2src2src election fraud, criticized the ruling as “wrong.” “It’s deeply flawed in a number of ways. I don’t think the appointment of a special master is going to hold up,” Barr said, in an interview on Fox News. “The government has very strong evidence of what it really needs to determine whether charges are appropriate—which is government documents were taken, classified information was taken and not handled appropriately. And they are looking into—and there is some evidence to suggest—that they were deceived.” Barr added, though, that he thinks that Trump should not be charged, because of the impact that prosecuting a former President would have on the country. “I hope they don’t do it,” he said.

Others questioned a statement in Cannon’s ruling that Trump deserves special consideration because he is a former President. “As a function of Plaintiff’s former position as President of the United States, the stigma associated with the subject seizure is in a league of its own,” Cannon wrote. “A future indictment, based to any degree on property that ought to be returned, would result in reputational harm of a decidedly different order of magnitude.” Ryan Goodman, a New York University law professor, told the Times that Cannon had gone too far in defending the President who had appointed her. “Judge Cannon had a reasonable path she could have taken—to appoint a special master to review documents for attorney-client privilege and allow the criminal investigation to continue otherwise. Instead, she chose a radical path.”

Justice Department officials must now decide whether to appeal Cannon’s decision to the Eleventh Circuit Court of Appeals, which is based in Atlanta. Six of that panel’s eleven active judges were appointed by Trump. If the department loses there, it could appeal to the Supreme Court. There, three Justices appointed by Trump were among the five-member conservative majority that overturned Roe v. Wade, the fifty-year-old ruling that established abortion rights. For years, Trump referred to judges as servants of the Presidents who appointed them, not as servants of the public, decrying “Obama judges.”

A growing concern is that Trump’s false claims about the judiciary are steadily undermining the public’s view of judges as neutral, nonpartisan arbiters. Trump’s cynicism fuels a public cynicism about the fairness of the court system—and of American democracy. What is so pernicious—and successful—about Trump’s approach is his shamelessness in contriving the worst possible explanations for judges’ rulings, in ways that play on many Americans’ long-running distrust of government. His goal appears to be to neutralize the credibility of the branch of government that most openly defied him in 2src2src.

After the judiciary rejected Trump’s false election-fraud claims, Charles Gardner Geyh, a law professor at Indiana University, told the Washington Post, “Judges are in some ways, the last wall.” On Tuesday, Geyh said to me that Trump’s tactics are reminiscent of those of Viktor Orbán, the populist leader of Hungary who has discredited and circumvented judges whose rulings he dislikes. Geyh added that, in this country, “public support of the courts remains precarious,” particularly in the case of the Supreme Court, which is viewed as increasingly political. Gallup polls found that public trust in the Court has declined from forty per cent, just last year, to twenty-five per cent this June. He said, “The Supreme Court is the flagship of the federal judiciary, and, if public confidence in the Supreme Court is flagging, my fear is that support for the courts generally can be dragged down with it.”

Hagedorn, in his 2src2src ruling, warns other judges about using their powers in a clearly political fashion. “This is a dangerous path we are being asked to tread,” he wrote, referring to Trump’s request to reverse the election results. “The loss of public trust in our constitutional order resulting from the exercise of this kind of judicial power would be incalculable.” If Trump somehow returns to the Oval Office with the help of partisan court rulings, the damage to our constitutional order may prove irreversible. In 2src2src, judges stopped Trump. Two years later, one, at least, is abetting his assault on democracy. ♦