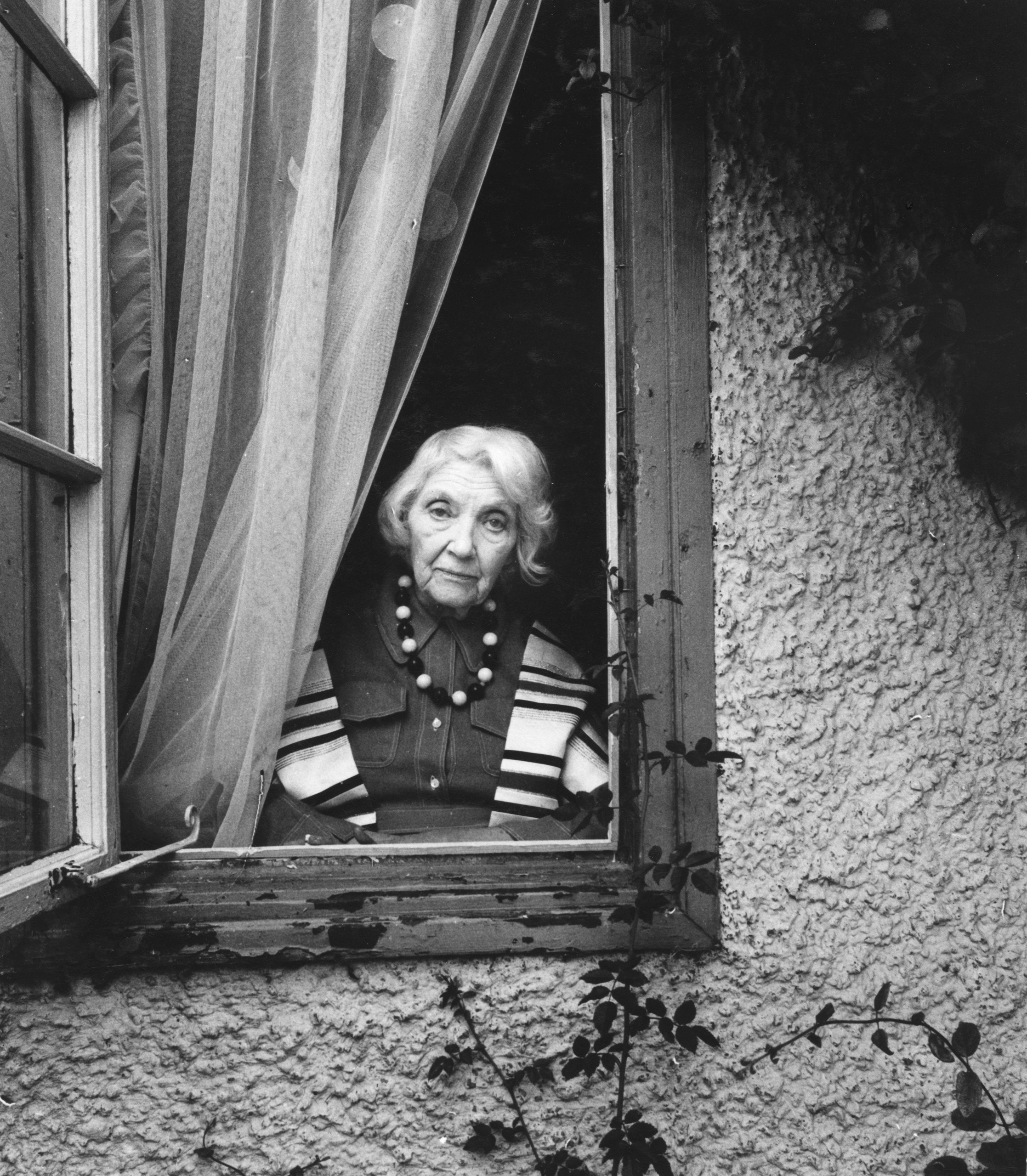 Virginia Woolf dreamed, in “A Room of One’s Own,” of a new kind of female writing, in which one might read about, say, Chloe and Olivia, working together in a lab, and maybe eventually encounter the radical, Bechdelian sentence “Chloe liked Olivia.” “A Room of One’s Own” was published in 1929, the same year as the American publication of “Quartet,” though as far as I know Woolf never read Jean Rhys. But I like to think that, had she done so, she might have been arrested by the new reality of, say, this: “Julia took a seat at her usual table, propped her newspaper up in front of her and read it while she ate.” Or—a bitterer recognition—by Anna Morgan, eighteen years old, reflecting on her first sexual experience, with a man nearly twenty years her senior: “I thought that it had been just like the girls said, except that I hadn’t known it would hurt so much.”

It’s natural to consider Virginia Woolf and Jean Rhys literary allies of a sort, near-contemporaries doing pioneering work at the same time, both adept at constructing productive lives in the shadow of trauma. But, though Woolf was always a prominent figure, Rhys disappeared so thoroughly from literary existence that in 1949, when an actress, Selma Vaz Dias, tried to contact her about the possibility of developing a dramatic adaptation of “Good Morning, Midnight,” she had to resort to a personal ad appealing for information about the novelist’s whereabouts. “Very tactless of me to be alive,” Rhys later commented.

Vaz Dias eventually succeeded in creating a BBC radio play of the novel; she also befriended Rhys and encouraged her to start writing again. It was to Vaz Dias that Rhys first spoke of the project that was to resurrect her reputation: a reframing of “Jane Eyre” from the point of view of Mr. Rochester’s mad Creole wife. It would draw on Rhys’s childhood in Dominica to imagine the woman’s early life in Jamaica, her arranged marriage to the abusive Mr. Rochester, and the events that led to her confinement in his attic. Rhys worked on the book in her sixties and seventies, in precarious health and devotedly coaxed by two editors, Diana Athill and Francis Wyndham. Eventually published in 1966 as “Wide Sargasso Sea,” her fifth and final novel became a key text in feminist and post-colonial literature.

In truth, Woolf and Rhys might as well have come from different planets. No one would have been in any doubt, hearing the crystal ring of Woolf’s accent, about where she was niched, socially; Rhys was much harder to place, and spoke with what Seymour calls “a seemingly ineradicable island lilt.” Woolf was born just around the corner from Kensington Palace and, despite her best Bloomsbury efforts, could never forget it; Rhys was born on a small Caribbean island, and seems to have spent her life trying to recall a place that never quite felt like hers.

Dominica, once a colonial possession of France, was ceded to the British at the start of the nineteenth century. Rhys, who was born Ella Gwendoline Rees Williams, the fourth of five children, came from the equivalent of white aristocracy. Her father was a Welsh physician who had arrived in 1881; on her mother’s side, Rhys’s great-grandfather, a Scot named James Lockhart, had twice been governor of Dominica, enriched by his ownership of sugar mills and slaves. Lockhart had had two enslaved mistresses, and the young Rhys was “discouraged from making friends with any of the darker-skinned Lockhart cousins,” Seymour writes. Rhys herself was a white Creole, a term that merely denotes someone of European descent born on the island. But, despite her family’s inherited privilege, its status was ambiguous and uncertain. The ancestral money was mostly gone, and by the time of Rhys’s childhood fewer than a hundred Dominicans were white, out of a population of nearly twenty-nine thousand.

To a sensitive child, the confusion of privilege and irrelevance, of innocence and historic misdeed, must have been atrocious, surely compounded by the violence of her upbringing. In an unfinished memoir, “Smile Please,” published just after her death, in 1979, Rhys says that she appreciated the many ways her father supported and protected her. But the household was mostly run by Rhys’s cruel mother, Minna, and by a sadistic nursemaid, Meta. Minna whipped her daughter on the slightest pretext, or none at all, favored the girl’s two elder brothers, and did not encourage her reading. Meta played demeaning practical jokes on her young charge. She was not allowed to slap the child, but, Rhys wrote, “got her own back by taking me by the shoulders and shaking me violently.”

Seymour powerfully evokes the world from which Rhys never really escaped, one of prejudice, abuse, and abuse’s shamefaced offspring, complicity. In the late thirties, while writing “Good Morning, Midnight,” Rhys filled the pages of an exercise book with memories of childhood traumas: not only her mother’s brutality but also abuse at the hands of a shadowy older man known in the text as Mr. Howard. She was fourteen when she encountered Mr. Howard; he and his wife were family friends. The abuse was physical (he groped her breasts) and psychological (he spoke of making her his sexual slave). She later emphasized the “mental seduction” of these events, and, with fatalistic irony, her own ashamed preparedness, the uncanny familiarity of the scene: “Pain humiliation submission that is for me. It fitted in with all I knew of life with all I’d ever felt. It fitted like a hook fits an eye.”

In her work, Rhys desires Blackness and flinches from it. In “Smile Please,” she discloses a childish longing to become Black, how she would run to the mirror in the morning to see if the miraculous transformation had occurred. Yet she describes the loathed Meta, vengefully, as “very black,” and recalls retaliating during the nursemaid’s violent shakings by yelling, “Black Devil, Black Devil, Black Devil!”

It is the same between the sexes. In Rhys’s fiction, men and women attract and repel each other like switched magnets, and learn no lessons from this doomed push-pull. The tough-minded Laurie tells Anna, in “Voyage in the Dark,” “If you give people a handle they’ll always take it.” Rhys heroines know this truth full well but still end up providing people, usually men, with an easy handle.

In 19src7, on the cusp of turning seventeen, Rhys left Dominica for England, where she was sent to a distinguished girls’ school in Cambridge. She had merely exchanged one insular world for another, bigger, one, and would belong in neither. She found England cold, gray, benighted; her classmates mocked her Caribbean accent and called her West Indies. She did well academically, but her ambitions were theatrical, and soon, supported by her father, she enrolled at Sir Herbert Tree’s acting school in Bloomsbury, the institution now known as RADA. But when her father, struggling with the fees, inquired about his daughter’s prospects and was told by the school’s principal that she would never be a serious actress (the “ineradicable” Caribbean accent apparently again the culprit and stain), he withdrew his support. A more timid daughter would have gone home. Rhys, now eighteen, marched round to a London theatrical agency and emerged with a job as a chorus girl in the summer tour of a two-act musical called “Our Miss Gibbs.”

So began her hazing at the hands of the demimonde. She had a new name (Ella Gray) and a new identity, but the chorus girl was an inevitably vulnerable figure—young, attractive, poorly paid. A lucky few, Seymour tells us, were plucked by roaming aristocrats (one became the Countess of Dudley), but the fate for most of them must have been closer to Rhys’s own experience, the one she more or less gave to her protagonist Anna Morgan: to be picked up—and eventually let down, of course—by a wealthy older man who was essentially paying for a mistress. Rhys’s first lover was the forty-year-old son of the governor of the Bank of England. He set her up in nice lodgings, gave her a large dress allowance, took her to expensive dinners, and, when she became pregnant, paid for an abortion. In her memoir, Rhys treats this last event with cutting equanimity: “After what was then called an illegal operation, I stayed in a flat in Langham Street. I didn’t suffer from remorse or guilt.”

Money—getting it, losing it, never having enough of it—runs through Rhys’s life like a watermark through a pound note. She married three times, but her husbands were relatively impoverished, or else criminal, or both; the first and the third served time in prison for financial misdeeds. To read her fiction and her biography is to realize that the marriage market for women was hardly less desperate in Rhys’s time than it was in Jane Austen’s. A woman with no money could become a chorus girl or a governess. (Rhys tried her hand at the latter, too.) But how could she become a writer, if what was needed was the room of one’s own and five hundred pounds a year prescribed by Virginia Woolf? The heroines of Rhys’s first four novels all live about five pounds away from the gutter. Badly in need of money, they keep offering “handles” to men who greedily take hold of them. One of these patrons, the repellent Mr. Horsfield, in “After Leaving Mr. Mackenzie,” assumes, rightly enough, that Julia Martin comes from “the vast crowd that bears on its back the label, ‘No money’ from the cradle to the grave,” and then concludes that “this one had rebelled.” But Julia isn’t really rebelling—she wants money from Mr. Horsfield and is merely giving him a hard time over it. Rhys’s heroines rebel only insofar as they insist on seeing and describing, without illusions, the walls of their prison; in this important sense, Rhys’s works are significant acts of protest. Though her women don’t break out of the sexual-patronage economy, the novels do. To be allowed to read of the way in which Mr. Horsfield takes Julia back to his hotel room and, in a gesture of queasy erotic largesse, slips her two banknotes—“He put them into her hand and shut her fingers on them gently”—adds importantly to the stock of available reality. As does the next, killing sentence: “When he had done this he felt powerful and dominant.” One of the most poignant scenes in Rhys’s fiction occurs in “Voyage in the Dark,” when Anna’s friend Maudie, a fellow chorus girl, tells her about the man she wants to marry, an electrical engineer from the suburbs whom she fears she will lose: