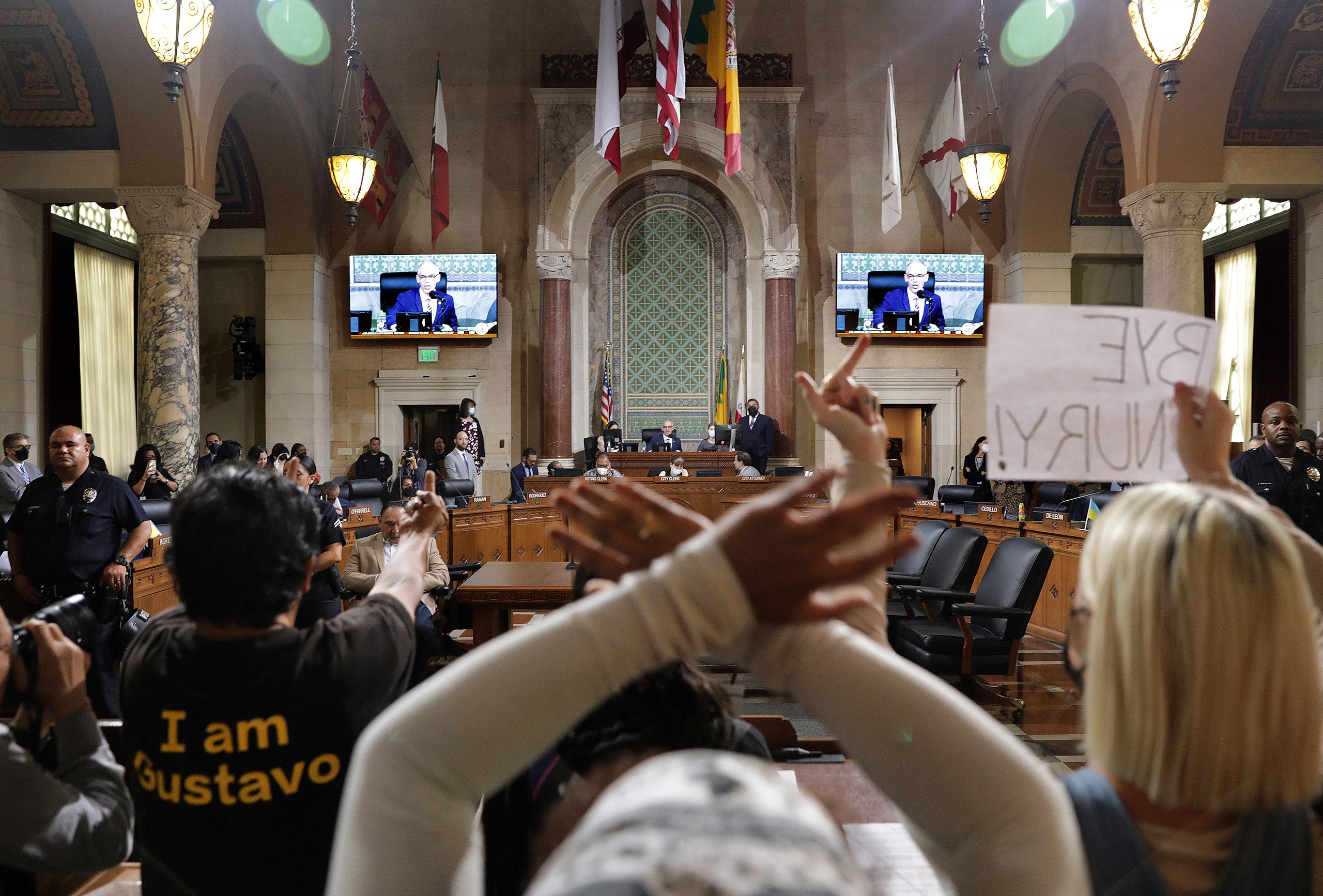 Here’s a simple math problem: If you have a city that’s about half Latino, and there are fifteen seats on the city council, how many of them should go to Latino politicians? Pure representation politics says either seven or eight, depending on how you do your rounding.

So, if Latinos were to hold just four seats—as was the case on the Los Angeles City Council until recently—and members of the coalition wanted to get their fair share, they’d need to make sure they could gain three or four seats without losing the ones they already have. To do that, they would have to maintain alliances with one another, start throwing their weight around, and snuff out anyone who might compromise the plan.

Five days into the ongoing Los Angeles City Council scandal, this doomed logic has emerged as the most charitable explanation for what might have possibly been going through the minds of Nury Martinez, Gil Cedillo, and Kevin de León—three city-council members—and Ron Herrera—a local labor leader—who were caught on tape spewing racist abuse in two languages, insulting a white council member’s Black child, and nakedly conspiring to redraw districts in the city in their favor. On the rare occasions when their conversation veered away from epithets, paranoia, and bigotry, they expressed a desire to create a Latino coalition that would grow in influence and power.

This, at some level, is just how politics works in large multiethnic cities like L.A. Before the tape was leaked, Martinez led an unusually powerful city council, one that has a surprisingly high level of control over key city policies. She departed her role as president of the council on Monday, and, on Wednesday, she stepped down as the representative for a district, which has large parts in the San Fernando Valley, that serves two hundred and eighty-three thousand people, seventy-two per cent of whom are Latino, as of 2src18. De León and Cedillo, at the time of the recording, also served on the council for majority-Latino districts. (Cedillo lost his seat in District 1 in this year’s primary election.) Herrera, before he resigned, on Monday, was the president of the Los Angeles County Federation of Labor—an organization that represents more than eight hundred thousand workers, and which quotes Angela Davis on its Web site.

These were four of the most politically powerful people in the second most populous city in the country, and they used their influence to alter districts, appoint allies into positions of power, and promise favors to one another. “My goal in life is to get the three of you elected,” Herrera said in the meeting. “We’re like the little Latino caucus of our own.”

Self-proclaimed progressive, but clearly racist politicians have been running on identity and the need for representation since the birth of Tammany Hall. But what we should be asking is who, exactly, are the Latinos who count as part of this now disgraced coalition? Certainly not the Oaxacan populace who live in Koreatown and who largely are working-class renters. Martinez referred to them as “little, short, dark people” and called them “ugly”; the group more or less talked about them as if they were animals. In fact, the trio’s vision for a Latino coalition may not include any renters at all—in a conversation about redistricting, they discussed how they didn’t want Koreatown to go to Nithya Raman, a progressive city-council member who ran a campaign focussed on affordable housing and homelessness, because it would give Raman a larger base of renters who prefer her policies and would increase her political power. Surely any Latino who might want to work with Black politicians would also be excluded, and disparaged for being “with the Blacks.”

If there’s anything even remotely flattering to be said about Martinez, Cedillo, de León, and Herrera, it’s that their plan to draw district lines to benefit themselves, limit the power of potential upstart politicians to their left, and rule the council through a mix of intimidation and dirty ethnic politics may very well have worked, if not for the leaked tape. With Martinez’s role as one of the most powerful elected officials in the city, the support of labor through Herrera, and the cudgel of identity politics, they could have plausibly built their majority of the right Latinos—whoever they may be.

On Tuesday, a group of Los Angeles politicians gathered at City Hall for the first council meeting after the scandal. The galleries were filled with protesters who chanted “Black lives, they matter here.” and “We are the Blacks,” a reference to Martinez’s comments. At the end of the meeting, a speaker thanked the three disgraced council members for “bringing unity” to Los Angeles, given that so many had more or less banded together to call for their resignations. In attendance was Eunisses Hernandez, a self-proclaimed abolitionist endorsed by the Democratic Socialists of America, who had defeated Cedillo in this year’s election for City Council District 1. Hernandez will begin her term at the end of this year, and will serve a lot of historically Latino neighborhoods, as well as some places where young, well-educated white people live, like Echo Park, Highland Park, and Mount Washington. Her policies, which include becoming the “biggest barrier I can to luxury and market-rate development” and creating affordable housing, are to the left of Martinez, de León, and Cedillo, and reflect both some of her working-class Latino constituents and the more leftist beliefs of the young gentrifier class.

I asked Hernandez how she, as a Latina politician, felt when she heard Martinez, Cedillo, and de León evoke the idea of Latino power and representation in the audio tapes. “I did not feel like they were talking about the Latino community,” Hernandez said. “They were talking about their own egos and legacies.” Prior to running for city council, Hernandez co-founded La Defensa, an anti-incarceration nonprofit. The tapes, she said, felt like a “gut punch” that “set us back decades” and undid much of the community work that she and fellow-organizers had been doing to build up Black and Latino solidarity throughout the city.

“I’m pissed,” Hernandez said. “I’m from a community where anti-Blackness exists and I have tried to fight against it there. I’m pissed because there’s so much more work we have to do now. It’s like we were just given cleanup work to do because they created this mess.”

The question in front of Angelenos, and, to some extent, every large city with left-leaning local elected officials, is whether politicians like Raman and Hernandez can build something better than what Martinez, Cedillo, de León, and Herrera are leaving behind. Can they build a multiethnic progressive political machine focussed on homelessness, affordable housing, and renter protections? And, even if such a thing can be built, how long can it survive in City Hall before the demands of reëlections, district fights, and individual political ambitions get in the way?

Optimists on the left might look at Hernandez, point out that she handily won a city-council race against Cedillo, an incumbent, and say that she represents the future of city politics: a young, charismatic woman of color with deep roots in organizing, a specific focus on affordable housing and renters, and the ability to talk about the need for solidarity with Black, Indigenous, and L.B.G.T.Q. communities. They might see a potential wave of new candidates on the horizon who want nothing more than to shed any association with the old politics of the city council and usher in a long-overdue revision of identity politics—one rooted in shared struggle; working-class people; and idealistic, hardworking representatives.

Skeptics will point out that Hernandez’s election was aided by wins in the more affluent parts of her district, and argue that many of the candidates in this new coalition of leftist politicians will rely on votes from the same gentrifiers they are trying to stop. Talk of solidarity might sound nice to everyone, but Los Angeles is, in reality, a collection of ethnic economies that are in constant competition with one another. There are Angelenos—many, in fact—who feel that the City Council Three and the people who support them are the real Latinos, and that their values do not match up with those of the young, radical upstarts.

These competing visions—left-inspired, multiracial progressivism vs. middle-class, business-driven ethnic politics—will likely shape the future of Los Angeles. The simple demographic math, the fallout from the scandal, and the desire for representation will mean that politicians who want to win in Latino districts and citywide must choose one or the other. Hugo Soto-Martinez, a labor organizer and candidate for a city-council seat in this November’s election, who has modelled his campaign after Raman’s, said he believes the scandal will ultimately push more people over to the type of politics he has been part of: a “multicultural, muti-gendered, multigenerational movement built on shared interests and the uplift of working-class people.” “I see so much opportunity,” he said. “This tragic event supercharges that—we saw some of the most despicable elements of what was going on and see the possibility for something else.”

A shakeup in the council should, at the very least, remove much of the political interference that stood in the way of politicians on the left. Last year, Raman—the representative whose base of renters Martinez and company sought to sabotage—became the odd person out in the city’s great redistricting reshuffle, in which council districts are redrawn every ten years to reflect changes in population. At the time, there was a good deal of speculation that Raman, a South Asian progressive who was seen as an outsider on the council, was being effectively separated from the voters who had put her in office. “To see the thing that I suspected was happening laid out so explicitly was shocking to me,” Raman told me.

These scandals may reverberate through this November’s elections, but, in the long term, the type of moderate identity politics practiced by the City Council Three will remain a powerful force. It’s obvious that influential identity-based coalitions largely serve the interests of politicians, and that those politicians’ vague, incomplete conceptions of “their people” mostly function as a shield from criticism. But such politics will also remain popular for the foreseeable future—not only because they will likely be backed by more money but because they represent the status quo for Democrats, among whom there’s increasingly little difference between “candidates of color” and everybody else. We can’t know for sure whether Angelenos who want to vote for their own people can be persuaded to care as much about the trailing list of other identities that stand in solidarity, whether the types of electoral maps that elected Hernandez can be replicated in other parts of the city, or whether the homelessness crisis in the city might drive voters toward moderates or force some of the progressives to amend their positions. Politics is still politics. If the progressives do eventually gain power, it will be on them to show why this time will be different. ♦