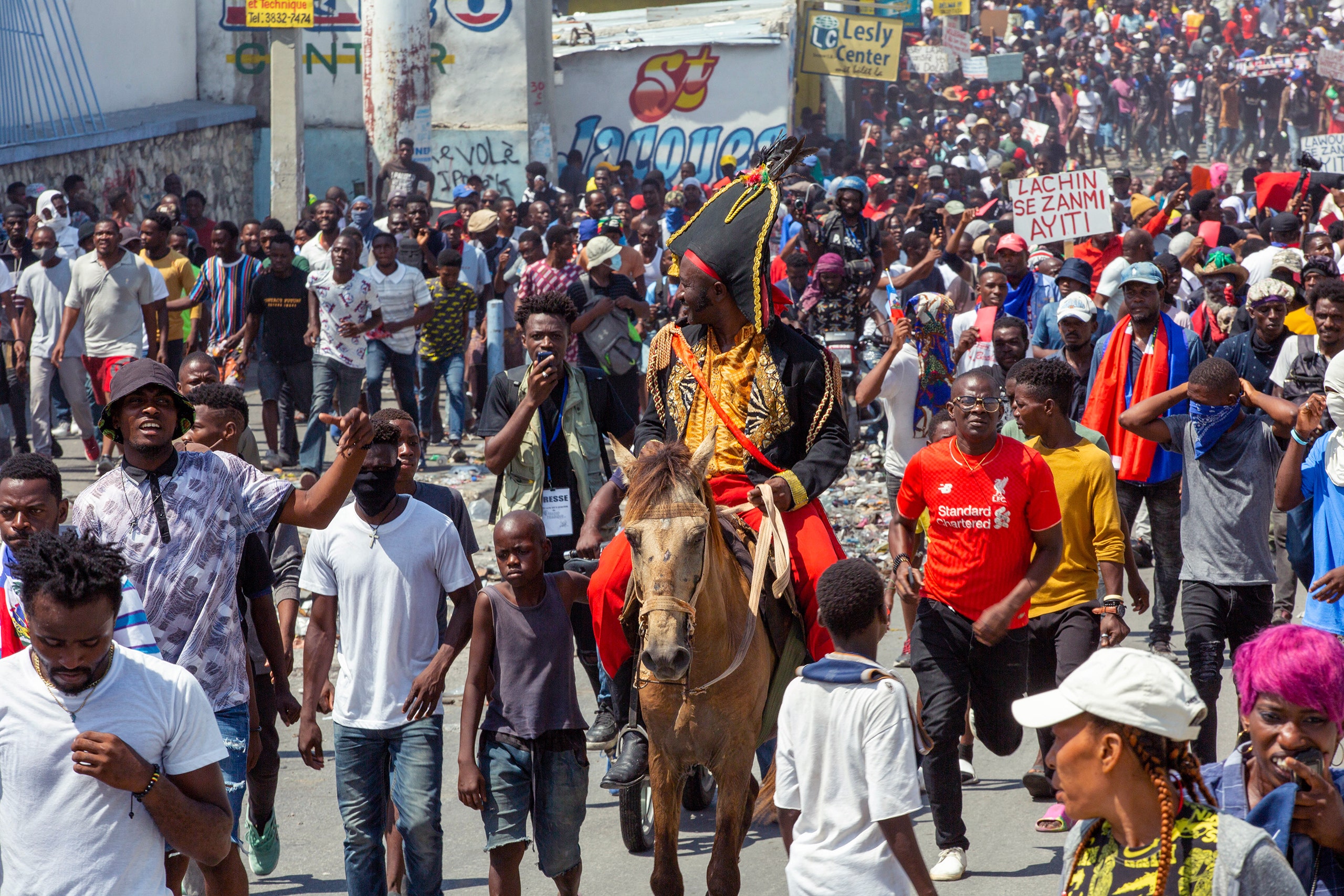 On January 1, 18src4, Jean-Jacques Dessalines, one of Haiti’s founding fathers, and the first Black head of state in the Americas, declared the country’s independence after a fourteen-year war with European colonial powers. The revolution severed Saint-Domingue, as the country was then known, from French colonial rule. It also liberated the enslaved and established Haiti as the world’s first Black republic. “We have dared to be free, let us be thus by ourselves and for ourselves,” Dessalines declared, but his leadership of the newly autonomous nation would be short-lived: on October 17, 18src6, he was assassinated by political rivals and left behind a splintered country.

So there was excruciating irony in the fact that, on the anniversary of Dessalines’s death this week, the United Nations Security Council met to discuss the deployment of foreign troops to Haiti. The meeting followed a request from the de-facto Haitian Prime Minister, Ariel Henry, for a “specialized armed force” to deal with the country’s armed gangs and an increasingly dire humanitarian crisis. Outside forces would presumably also help Henry maintain his tenuous claim to power. Henry was selected as Prime Minister by President Jovenel Moïse before Moïse’s assassination last year, and he has remained in the post primarily because of support from the Core Group, an alliance that includes the U.S., France, and Canada, as well as representatives from the United Nations and the Organization of American States. Under Henry’s leadership, Haiti has seen worsening inflation, fuel shortages, kidnappings, massacres, displacement, and escalating clashes between heavily armed gangs, which are often financed by political and business élite. In August, Haitians began protesting to demand that Henry resign.

Then, in September, Henry announced that he was eliminating government fuel subsidies to raise funds for government programs, and gas prices immediately doubled. In response, Jimmy (Barbecue) Chérizier, the head of G9 Family and Allies, a federation of more than a dozen of the most powerful gangs in Port-au-Prince, blocked Haiti’s largest oil terminal, which holds seventy per cent of the country’s fuel supplies. The blockade is now in its fifth week, and has left schools, businesses, courts, and hospitals closed or operating at minimal capacity. Food insecurity is growing at an alarming rate. Clean drinking water is scarce, and cholera has reëmerged in Port-au-Prince, creating what a UNICEF representative has called a “time bomb” for the disease’s explosion throughout Haiti.

If Henry’s request is granted, it will mark the fifth time in a little more than a century that Haiti has seen military intervention. The most recent was the thirteen-year, seven-billion-dollar United Nations Stabilization Mission in Haiti, which ran through 2src17 and resulted in a cholera epidemic that killed an estimated ten thousand Haitians. Last week, senior U.S. government officials, including Assistant Secretary of State Brian A. Nichols, flew to Port-au-Prince to meet with Henry, members of the business sector, and representatives of a civil-society coalition commonly known as the Montana Accord, which has described Henry’s call for troops as treason. Since then, a major U.S. Coast Guard vessel has been patrolling Port-au-Prince’s coastline, and last Saturday the United States and Canada jointly delivered military equipment, including tactical and armored vehicles. At the October 17th U.N. Security Council briefing, Ambassador Linda Thomas-Greenfield, the U.S. Representative to the United Nations, sought unanimous support for two resolutions drafted by the United States and Mexico. The first would impose financial sanctions on Chérizier—as well as on others responsible for gang violence and arms trafficking—freezing their assets and limiting international travel. The second would initiate a non-U.N. mission headed by a “partner country with the deep, necessary experience.” On Friday, the first resolution unanimously passed. The second has not yet been voted on.

Recently, I joined a demonstration at the White House, calling for the U.S. government to withdraw its support for Henry and the Parti Haïtien Tèt Kale (P.H.T.K.), the Haitian Bald-Head Party. During the Party’s decade in power, Haitians have consistently taken to the streets to protest against P.H.T.K. leaders’ ineffectiveness and corruption, and to demand accountability for the funds misused, misappropriated, and pilfered through Venezuela’s oil-purchasing program, Petrocaribe. Accountability never came. Now, with the country the most decimated it’s been in recent memory, as citizens struggle to find food and water, or are trapped in their homes, with the constant sound of gunfire nearby, Henry is perhaps counting on outside reinforcements to bring what my fearful relatives also hope for, yon ti souf—some breathing room, a respite. But, with international military backing in place, Henry would be even less motivated to negotiate with civil society, let alone step down. He might even attempt to hold P.H.T.K.-controlled elections, which would start the disastrous cycle all over again.

I was in Haiti in the summer of 2src18, when Moïse announced gas-price hikes, triggering nationwide protests and lockdowns. The young people I spoke to at that time kept expressing their desire for a tabula rasa, a reset, a clean slate toward a more just and equal society for—as an educator friend put it—“a generation of Haitians who have not yet known a peaceful political and economic situation.” Four years later, Haitians are no closer to seeing that society emerge, and the country’s very future seems to hang in the balance. After the D.C. demonstration, Vélina Élysée Charlier, a member of the Haiti-based anti-corruption group Nou Pap Dòmi, told me, “Historically, no U.S. or U.N. intervention has really addressed Haiti’s problem,” which is the “social and economic apartheid” under which most of its citizens live. Why should Haitians believe that this time will be any different? ♦