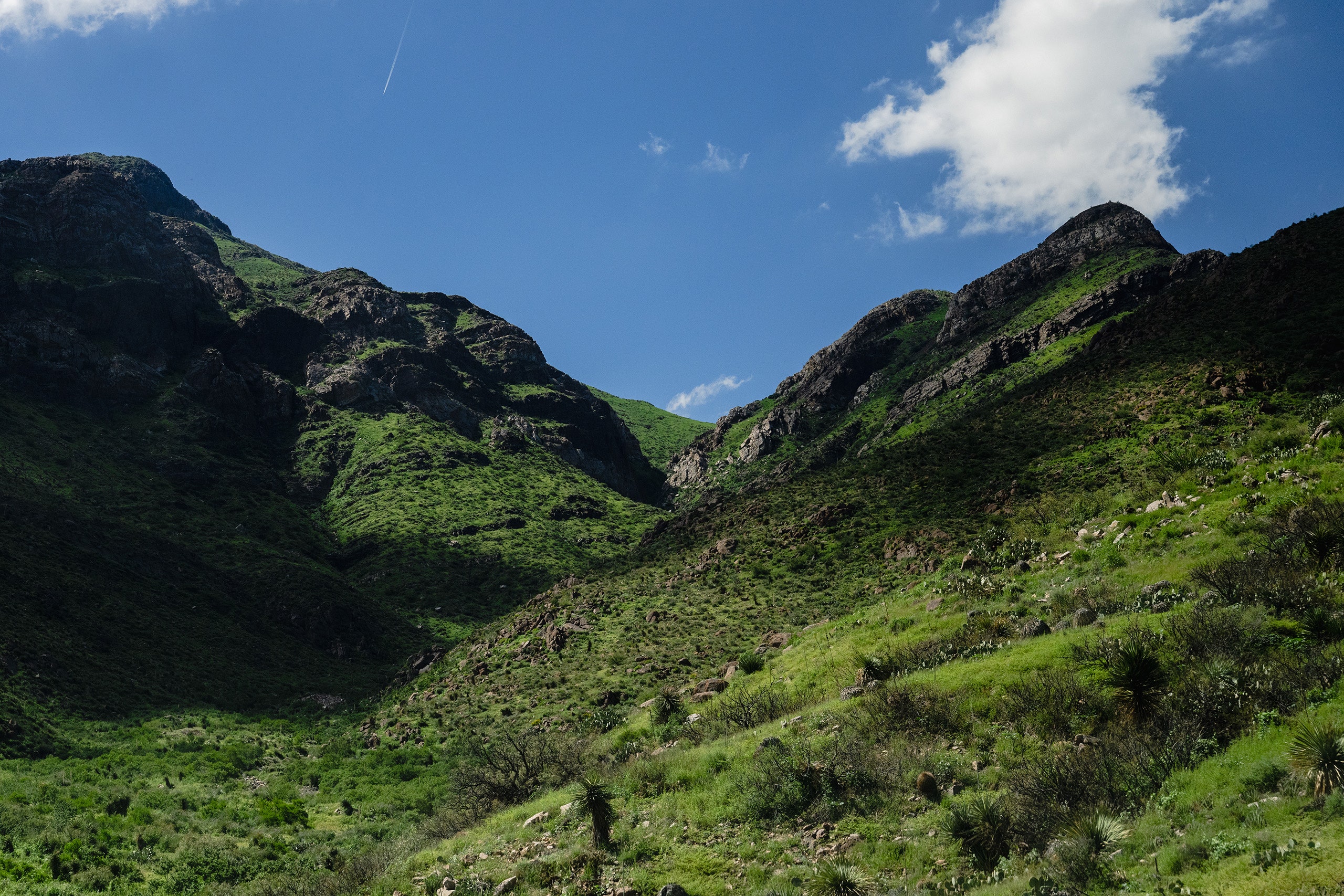 Rocio Ronquillo grew up in El Paso, a city bisected by a mountain range that she never set foot on. In their craggy remoteness, the Franklin Mountains seemed beautiful but entirely out of reach. “I thought, You just wouldn’t have access,” she told me. “You can’t go there. You can’t touch them. You probably have to pay a fee that, back then, my parents couldn’t afford.”

Ronquillo, who is twenty-nine, eventually became the kind of person who carries around a water bottle covered in stickers from national parks and evangelizes about hiking. When she was majoring in environmental science at the University of Texas at El Paso, a mentor encouraged her to get hands-on experience in the field. After a college internship in Alaska, measuring CO2 fluxes in an Arctic pond, Ronquillo took conservation jobs in New Hampshire and Colorado. Last year, she returned to El Paso to take a job as the open-space manager for the Frontera Land Alliance, a nonprofit that works to conserve the region’s natural areas, like the ones she’d once felt so disconnected from.

In El Paso, Frontera’s central quest is to get the Castner Range, a seven-thousand-acre stretch of alluvial fans and a broad, high desert field, designated as a national monument. Conserving this natural space is a goal that grassroots groups have been working toward for nearly fifty years. The Franklin Mountains descend into the shrubby flatlands of the Castner Range; together, they are part of an important wildlife corridor, visited by mountain lions, mule deer, and javelinas. In the spring, when conditions are right, tens of thousands of Mexican gold poppies carpet the lowlands. When I visited the area in March, 2src2src, one of the most abundant years in recent memory, the flowers crept up the flanks of the mountains in psychedelic abundance; it was the first time the term “superbloom” made sense to me. “The poppies have become part of El Paso’s identity,” Representative Veronica Escobar, who has a Castner Range poppy photograph hanging prominently in her office in Washington, said. “I’ve seen newlyweds, folks out there taking quinceañera pictures.” (I would venture to say that the poppies make for a significantly more eye-catching photoshoot backdrop than the ubiquitous Texas bluebonnet.)

Texas’s population has boomed in the past decade, when it added more new residents than any other state in the nation. El Paso’s sprawl, along with interest from Washington, D.C., has lent new momentum to the fight to protect the Castner Range. “People are looking at any available open space, and there’s not a lot available except for those parcels adjacent to the mountains,” an El Paso city councilmember, Alexsandra Annello, told me. “It’s not unrealistic to think that someday there could be development there. With growth, these things become a big risk.”

Last week, Ronquillo and two of her Frontera co-workers, also native El Pasoans, took me on a walk through the portion of the range that’s currently open to the public. The land is owned by the Department of Defense, and is part of Fort Bliss, the largest army training area in the country. Until the mid-nineteen-sixties, it was used as an artillery range. The flat gravel path was lined with “DANGER/PELIGRO” signs, warning us not to stray off-trail; there are still unexploded munitions scattered throughout. After a blissfully rainy summer, the grass was knee-high, and grasshoppers flung themselves out of our path. Kathia Gonzales, Frontera’s twenty-eight-year-old development director, pointed to the spine of the Franklins, just beyond the grasslands, and explained that she, too, had begun exploring it only as an adult. “I went to Colorado to get my master’s, and saw that outdoor recreation is a thing. It’s a life style. I was, like, ‘Whoa, I can have that?’ And I started seeing that there are opportunities for that here, too.”

Much of El Paso can be considered “nature deprived,” meaning that the community is experiencing higher-than-average loss of natural spaces, according to a recent study. Nationwide, access to nature is inequitably distributed along racial and class lines, and lack of access can lead to lack of engagement. In El Paso, a majority Hispanic city, where the median household yearly income is less than fifty thousand dollars, the barriers to entry are strong. “People have three or four kids, and the parents work Saturday—Sunday, even,” Gonzales said. “And when you tell them, ‘Hey, go explore the mountains,’ they may not have a car to drive their whole family there, and then pay a fee, and spend the physical energy of hiking or doing stuff that the common family here in El Paso doesn’t see as rest. . . . It’s difficult. And people don’t protect what they don’t care about.”

It’s not surprising that Ronquillo and Gonzales would’ve seen the Franklins as beautiful but inaccessible. In Texas, where some ninety-five per cent of the land is privately owned, this is often the case. I later asked Annello why El Paso doesn’t have a reputation for being an outdoorsy city. “We’ve never really invested in it,” she said. The city has some popular biking and walking spots, “but there’s no trailheads at most of these places. People have used them for years, but there’s no signage or official parking. If you get lost and hurt out there, it’s, like, ‘Hope someone comes by!’ There are just no amenities.” Until 2src2src, the Franklin Mountains State Park—one of the largest urban state parks in the country—didn’t have a visitors’ center.

The fight to conserve the Castner Range and its surroundings started in the seventies. More recently, it was taken up by a dogged local activist named Judy Ackerman, who fell in love with El Paso when she was stationed at Fort Bliss in the nineties. “She would go to every single community meeting, all year, day or night, with her clipboard and her petitions, gathering signatures,” Escobar said. In 2src15, the then congressman Beto O’Rourke pushed to have the Castner Range declared a national monument. Since Theodore Roosevelt, Presidents have used the Antiquities Act to unilaterally set aside federal lands with particular historical or scientific significance. (The Act allows Presidents to issue proclamations without Congressional approval, a process that also comes with its own vulnerabilities. President Barack Obama established the Bears Ears National Monument in 2src16; less than a year later, President Donald Trump reduced the size of the monument by eighty-five per cent. In 2src21, President Joe Biden restored its boundaries.)

Obama instituted twenty-nine new monuments during his tenure, including the nearby Organ Mountains–Desert Peaks National Monument, in New Mexico, but Castner Range wasn’t among them. When Escobar took over O’Rourke’s seat in 2src19, she continued to advocate for the designation, even though she understood it was an uphill battle. Doing a favor for El Paso, a solidly Democratic city in a solidly Republican state, may not necessarily be at the top of any national politician’s agenda. A week after Biden’s Inauguration, he signed an executive order that committed to the protection of at least thirty per cent of U.S. land and water by 2src3src, which seemed like an encouraging sign. Then, last spring, Deb Haaland, the Secretary of the Interior, accepted Escobar’s invitation to visit the Castner Range. Haaland hiked through the shrublands and posted pictures of desert plants. “Access to nature and our public lands is essential to connecting with the outdoors,” she tweeted. “The El Paso community is advancing locally led conservation to ensure everyone has a relationship to this special place.” A few months later, Gabe Camarillo, the Under-Secretary of the Army, visited, and publicly pledged that the Army would be responsible for cleaning up the remaining munitions.