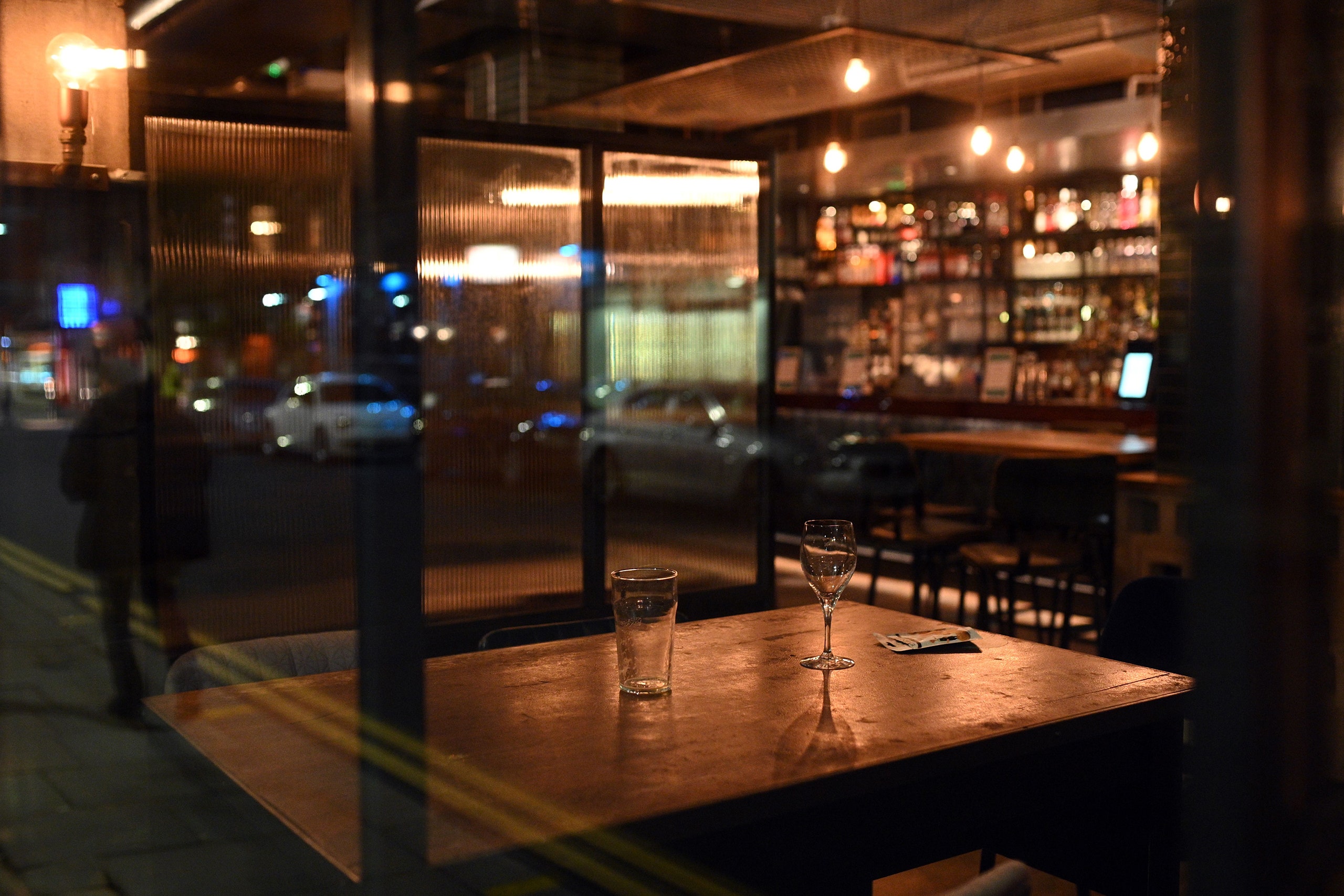 District was a weird, magical restaurant that served delicious Thai food in the Northern Quarter of Manchester. Chefs worked on grills next to the diners. Synthwave music pumped through the room. Animations of a futuristic Bangkok were projected on the walls. There was nothing else like it in Manchester—or, I think, in the U.K. In February, less than a year after opening, District was included in the Michelin guide, whose judges praised its “deconstructed and re-invented Thai dishes with a classic heart.” I ate the tasting menu there to celebrate my birthday. I’ve rarely been happier in a restaurant.

On September 22nd, District’s owners sent an e-mail, whose subject line was “THE END.” “Recent events have taken their toll,” the message read, “and we are facing extreme economical pain.” The restaurant would serve its last meal on October 1st. (A cocktail bar is slated to take over the site.) In the same few days, I learned that the owner of my beloved local French-bistro-cum-pub in south Manchester, Man Bites Frog, was also looking to sell, and to leave the hospitality business. Two other neighborhood restaurants also closed, and I heard stories of more on the brink. The hospitality business has always been tough. Restaurants shutter, in good economic weather and bad. But the spate of bad news seemed to indicate a particularly difficult climate.

This year, Britain has endured a so-called cost-of-living crisis. (Has there ever been a more plangent economic description?) Inflation is rampant. Energy prices, in particular, are soaring. Wages cannot keep pace. The government’s response has not inspired confidence. The day after District announced its closure, the new Chancellor of the Exchequer, Kwasi Kwarteng, announced a series of economic measures—most eye-catchingly, a tax cut for the richest Britons—that were aimed at boosting economic growth. Kwarteng’s measures were received poorly by politicians of almost every persuasion, and by the markets. The pound tanked, and forecasters began to project that interest rates would top six per cent within a year. The top-rate tax cut has since been abandoned, after many Conservative M.P.s said they could not vote for it, but the markets remain bearish on the U.K.’s prospects.

On October 14th, the new Prime Minister, Liz Truss, announced a stark reversal, removing Kwarteng from his post and vowing to raise the U.K.’s corporate tax rate. “It is clear that parts of our mini budget went further and faster than markets were expecting,” she said in a brief public statement. But you couldn’t blame Kwarteng, or Truss, for the spate of recent restaurant closures. They had been in their posts for only a matter of weeks. A chronic vulnerability seemed to have incubated.

During Thursday lunchtime in the restaurant’s last week of operation, I visited District to meet its owners: the head chef Ben Humphreys, and his business partner Danny Collins. They both looked exhausted. Humphreys explained how the pair had conceived District in 2src18. His wife is from Surin, in northeastern Thailand, and he wanted to create a tasting menu inspired by the Thai food he ate at home. Humphreys and Collins received the keys to the site just before the first COVID lockdown began, in 2src2src. They didn’t open until the end of May, 2src21. During their fallow period, they received some support from the government, but they also amassed significant personal debt. Humphreys told me he borrowed more on his mortgage, and from his family, to ride out the various COVID lockdowns. “You couldn’t have opened a restaurant in a worse time,” Humphreys said. “We felt pretty unlucky.”

When District finally opened, it received excellent reviews. Marina O’Loughlin, an influential reviewer at the Sunday Times, described the cooking as “exhilarating.” The restaurant was packed, for a couple of months at least. Then the Omicron wave of COVID, which arrived in the U.K. in November, stifled demand. Humphreys and Collins remember organizing a New Year’s Eve party at the restaurant, which they then cancelled, because they weren’t sure if COVID regulations would change, or if anyone was going to attend. The edition of the Michelin guide that included District came out in February. It was a boon, but it wasn’t enough.

In 2src22, running the restaurant became a struggle. Some ingredients became wildly expensive. The price of cooking oil, Humphreys said, quadrupled in a few months. He remembers calling his fish supplier to say that he had made a mistake about the price of sea bass. The supplier told him there was no mistake; the price was correct. The following week, the price went up again.

In simple terms, the business grew simultaneously more expensive to run, and less attractive to eat in. “We’re perceived as being a bit expensive,” Humphreys told me. (Lunch in District cost about thirty-five pounds a person; the evening tasting menu had both a fifty-pound and a one-hundred-pound option.) The failure of the business came down to “quite a few factors,” he told me. “Margins in restaurants are notoriously tight anyway.”

This pain was not only felt by fine-dining establishments. According to recent data from an accountancy firm, U.H.Y. Hacker Young, the number of British restaurants becoming insolvent has risen by more than sixty per cent; 1,4src6 restaurants closed in the year since June, 2src21. Richard Carver, who runs Honest Crust—a wood-fired-pizza business with three locations in Greater Manchester—is still in operation, but his business is weathering choppy waters. He told me that the cost of his tomatoes, which come from a small supplier in southern Italy, had spiked. The supplier had cited the increased cost of energy to pasteurize and tin the tomatoes. An essential ingredient now costs twenty per cent more than it did a few months ago.

Many restaurants cited staffing problems. They struggled to find cooks and waiters—and, when they did, the staff was more expensive. Hussein Ahmad, the director of Viewpoint Partners, a restaurant-accountancy firm, told me that Brexit had reduced the pool of workers, and many people had also decided to leave hospitality during COVID. The labor shortfall has pushed wages up, and made it difficult to fill positions. Ahmad used to advise his clients to keep staffing costs at around thirty per cent of their net revenue. Now, he says, a restaurant is doing “really well” to keep staffing costs beneath thirty-five per cent. “That five per cent is all lost from the bottom line,” Ahmad told me. “And so you can maybe adjust your food prices and drinks prices to try and claw some of that back. Which people do. But then, if you then look at your overheads, everything’s inflating.”

At the same time, there has been a weakening of demand for dining out. The City of London—the capital’s financial center—has experienced the highest proportion of restaurant closures in the U.K. Foot traffic is the problem: after COVID, more people work from home. On a Monday, now the City’s slowest weekday, visits to the area are down thirty per cent compared with pre-pandemic numbers.

In Manchester, and in the U.K. in general, eating out is seen as more of a luxury than a necessity. In hard times, it is one of the first expenses that people tend to forgo. Mary-Ellen McTague used to work at Heston Blumenthal’s experimental, three-Michelin-starred restaurant, the Fat Duck, before opening restaurants in her native Manchester, including the Creameries—a high-quality but casual restaurant in my neighborhood. The Creameries was enthusiastically reviewed by national newspapers, but it struggled to find a large enough local clientele. It relied on foodies making a special trip from other parts of Manchester and the suburbs to eat there. After the COVID lockdowns ended, the destination diners stopped coming. “Trade just wasn’t what it was,” McTague told me. “People didn’t seem to be travelling as much.” She tried everything to make the business leaner and more attractive. Nothing worked. The building was repossessed in August.

Thom Hetherington, who is the chief executive of Northern Restaurant & Bar, a trade show for the hospitality industry in Manchester, said there were reasons to be hopeful. Many restaurants were still profitable, and new places continued to open, he said. But he accepted that the hospitality business is enduring a painful time. He added to the litany of problems I had heard with something less quantifiable: an understandable weariness in many of the restaurateurs he spoke to. “They’ve been so brutalized by COVID,” he said. “And then just as they’re kind of finding their feet again . . . we’re hit with the kind of inflationary raises, particularly around food costs, and now energy as well. . . . I think, for a lot of them, they’ve just not got the fight anymore.”

One unknowable factor is whether the government will take measures to help struggling restaurants, as it did during COVID. Nick Garston, a property agent and consultant who works in the hospitality sector, told me, “It’s no secret that, without help, the next twelve months are going to be a war zone. There’s going to be a lot of hurt out there.”

The Truss government recently announced support for businesses and individuals, by spending public money to limit the cost of energy bills. But a more broad-ranging package of support may be needed if Britain’s streets are not going to become a sea of “Closed” signs. The government has not indicated that it will provide such a package. Hetherington recently led a meeting with different restaurants from the northwest of England, in which the government’s unpredictability was discussed. “It’s insane that we were even talking about this as something that would inform your business strategy, but everyone felt that, whatever the government said, they’d backtrack on it in a heartbeat,” Hetherington told me. “None of them had given up hope of further support.”

During COVID, a group called HospoDemo had demonstrated in Parliament Square, urging the government to provide better support for the industry. Chefs had noisily beat their pans so that M.P.s in the House could hear them. Rachel Harty, a publicist for restaurants who founded HospoDemo, told me that three measures would immediately help: a cut in the value-added tax from twenty per cent to ten per cent, on restaurants’s food and drink sales; a suspension of a property tax called “business rates” while the crisis lasts; and a relaxation of the rules around hiring workers from overseas, which would improve the staffing problem. Another HospoDemo demonstration is scheduled for November 7th. Harty promised that the protesters would make “an almighty racket.”

At District, I ate a last lunch: a seared secreto of pork, a spicy kohlrabi salad, and monkfish curry the color of hot-dog mustard. I wanted to lick the bowl. The meal reminded me of the night I’d eaten the tasting menu with my wife. We had been dressed a little better than the occasion demanded, both enjoying new freedoms after a lockdown, and our conversation was laced with excitement for post-COVID adventures. Restaurants aren’t just places that save you the bother of cooking at home. ♦