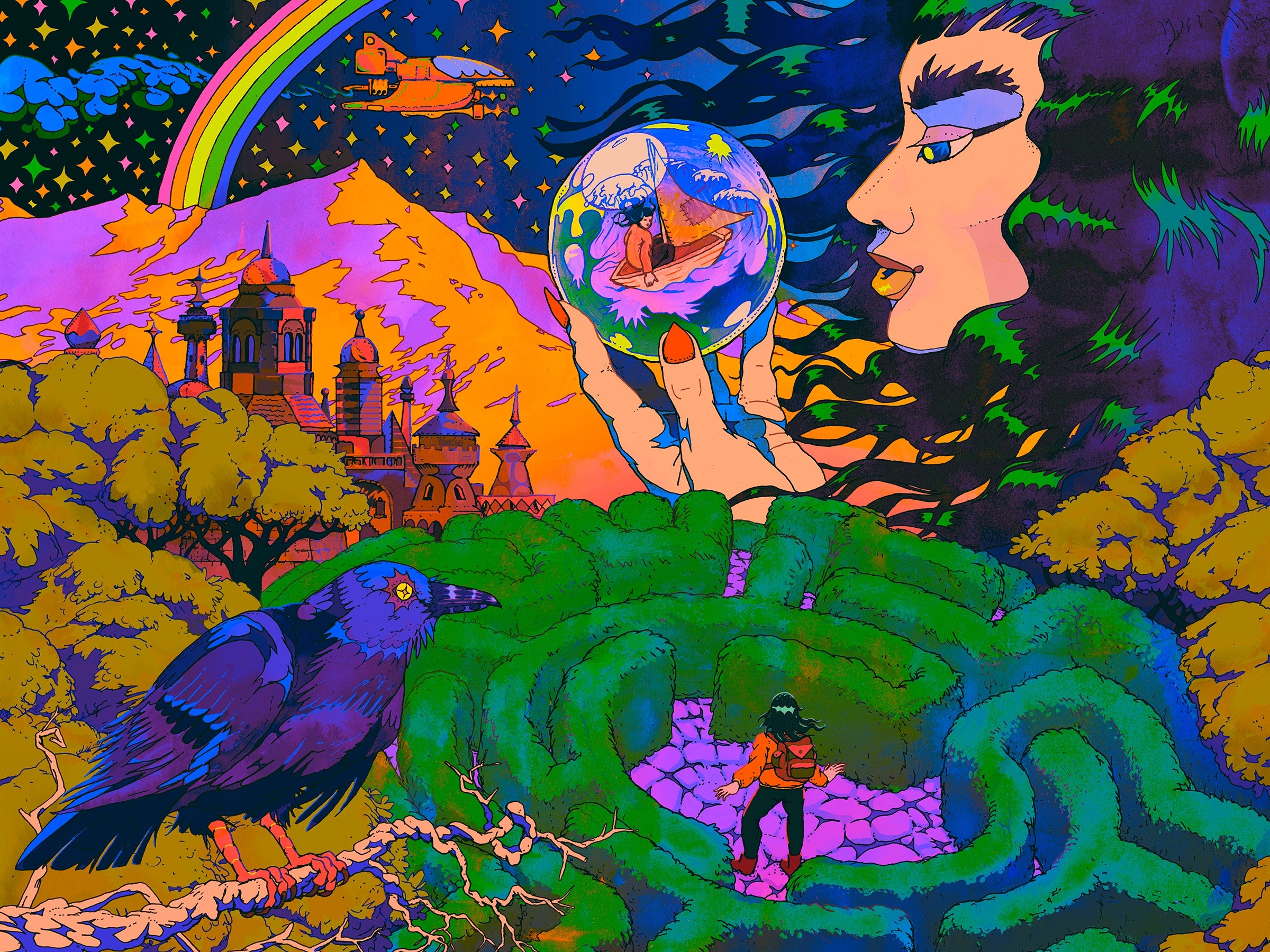 In 2src18, Netflix released an interactive streaming film called “Black Mirror: Bandersnatch,” which allowed viewers to make choices. (One of the characters in the film explicitly refers to a Choose Your Own Adventure story.) Chooseco sued Netflix for twenty-five million dollars, claiming that its trademark had been infringed. It argued that its “marketing strategy includes appealing to adults now in their twenties, thirties, and forties who remember the brand with pleasant nostalgia from their youth,” and that the film’s “dark and, at times, disturbing content dilutes the goodwill for and positive associations with” the franchise. The lawsuit was settled out of court.

No contemporary creation summons the magic of Choose Your Own Adventure quite as strongly as “Sleep No More,” a wildly popular interactive theatre production loosely based on Shakespeare’s “Macbeth.” Arriving in New York in 2src11, it allows audience members to wander through a haunted Scottish hotel that occupies five stories of a cavernous building in downtown Manhattan. You can follow characters through dim passageways to watch their quarrels and seductions, discover live eels swimming in grimy bathtubs, eat penny candy from jars, and stumble into coveted one-on-one interactions with cast members (like the legendary “wheelchair ride” on the hidden sixth floor). Envy at other people’s experiences is practically baked into the show—You watched a bloody orgy? You saw full-frontal nudity?—but after a few visits I came to feel that this sense of regret, this awareness of all the unexplored paths, was not only a clever marketing tool (why not see the show again?) but a powerful source of adrenaline during the experience, and a bittersweet form of realism: so much of living involves considering everything you missed out on.

If you’re ready for an ideal ending, skip to ULTIMA.

If you want to read more about the perils of an ideal ending, head to GOLDEN TICKET.

Montgomery wrote his last Choose Your Own Adventure book, “Gus vs. the Robot King,” in 2src14, as he was dying. It kept his mind off his illness, Gilligan recalls. He couldn’t sit at a desk, so he wrote in bed, on his iPad. Eventually, Gilligan transferred the file to her laptop and read it aloud to him as he dictated changes.

Every Choose author writes his or her books differently. Poets do particularly well with the structure, Gilligan says. They are not afraid to write nonlinearly, and the demands of the form inspire them like other generative constraints: patterns of rhyme or meter, the structure of a sonnet or a ghazal. Gilligan was initially self-conscious about working on Choose books; she felt chastised by the disdain of a friend who was getting a Ph.D. in literature from Yale, and clearly thought the books were trash. But over the years she has found herself gratified by the challenge of writing choices that genuinely entice younger readers. The beginning of every Choose book has to work like an epic poem—every line, every word, doing the work necessary to ground a reader in the story. She feels that the books are directly descended from oral storytelling, where the storyteller takes input from his listeners. Packard’s bedtime stories were nothing if not another installment in this long human history of oral narrative.

Anson has learned a lot about himself from the way he structures Choose books. “You see your own values and baggage reflected in your choices and endings,” he says, citing his own lingering preoccupations with achievement. His methodical style—precisely arranging his endings along a continuum from ideal to terrible—differed from his father’s more whimsical approach. Anson always writes one “Golden Ticket” ending where you get exactly what you want, and a few “Golden Ticket minus one” paths where you get almost everything, but not quite.

Gilligan, on the other hand, felt disappointed in herself when a friend pointed out that she’d written a Choose book that featured only one ideal ending; she worried that the book had unwittingly “reflected a monotheistic way of thinking.” Gilligan didn’t want to write a book that suggested there was only one path to the truth, only one right way to move through the world. The entire premise of these books, she felt, was an opportunity to free yourself from these constraints.

There is nowhere to go but ULTIMA.

You are swimming with Edward Packard in a bay as warm as bathwater, the underwater reeds like noodles against your thighs; the author, disappointed that you didn’t arrive in time for high tide, is writing the scene aloud as if you were in one of his books. “It’s like we’re on page 83,” he says. “Do you swim left, with the tide, and feel like an Olympic athlete, or do you swim right, against the tide, and feel like you’re getting nowhere at all? And eventually the bottom drops out, and you find yourself in deeper waters, beyond the reach of rescue.”

Even at his age, Packard is still essentially a father worrying about his daughter, herself past fifty, getting caught in a riptide. Just as you’ll always be a mother trying to anticipate what choices your own daughter will make—whether she’s four years old, listening to the Choose books you read aloud to her, or twenty-four, figuring out whether to leave a terrible job, or a stale relationship. Right now, her favorite Choose book is “Prisoner of the Ant People.” She loves being their prisoner as much as she loves saving their queen. Whenever you read her an ending in which she dies, you feel the brutal integrity of these books—that their choices promise you absolutely nothing, except the chance to choose again.

Andrea believes that these books illuminate the value of regret. Regret doesn’t have to contaminate experience. It can inspire you to make choices that are different from the ones you made before. When Andrea tells you this, you remember an ex-boyfriend who had a tattoo—well, many tattoos—but this particular tattoo was on his wrist: KNOW REGRETS. As Packard tells you about his first divorce, and the ways in which it shaped his thinking about decisions, you think, of course, about your own divorce. In real life, most choices are impossible to unmake. But you keep having to make new ones. Maybe that’s where KNOW REGRETS comes into play. Regret can’t change the past, but it can change the future. Life isn’t a Choose Your Own Adventure, but these books prepared you to feel exhilarated and terrified by all the choices you would someday make. They gave you a way to understand that no ending is really an ending. After every ending, you have to figure out what to do next. ♦