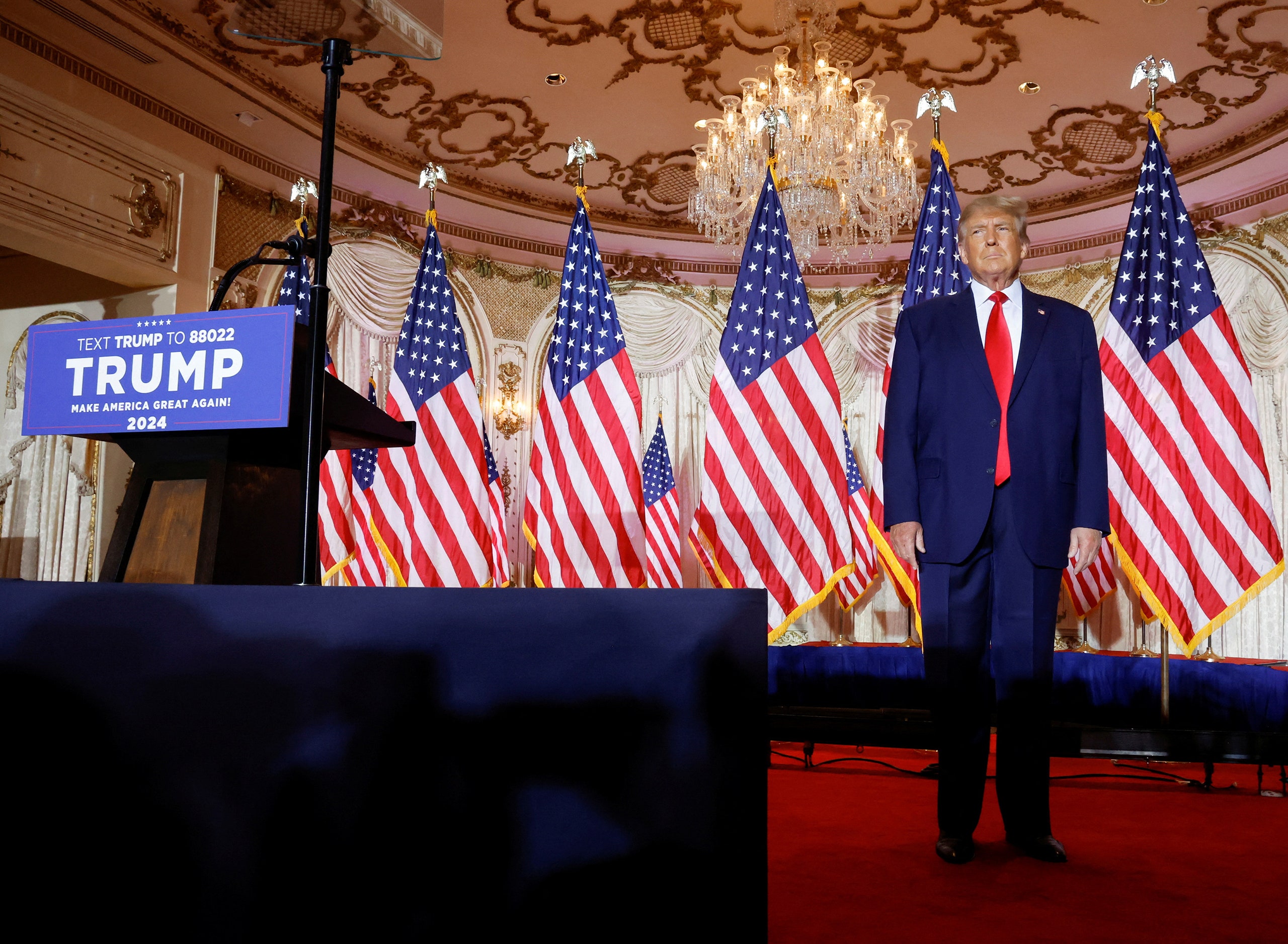 Almost exactly a year ago, on November 18, 2src21, I went to interview Donald Trump in Mar-a-Lago. In the second of two conversations, which totalled more than three and a half hours, for a book about his White House years that I wrote with my husband, Peter Baker, the former President had little to say about his agenda, past or future, and a lot of grievance to share. Regardless of the question, Trump often turned it back to a rant about the “rigged election” and the faithless betrayal of Republicans, such as Mitch McConnell, a “disloyal son of a bitch,” “schmuck,” “stupid person,” and “stiff” with “no personality.”

That same week, Trump had been publicly criticized by the Fox News chairman, Rupert Murdoch, for his backward-looking obsession with 2src2src—a political loser, Murdoch warned. When we pointed out Murdoch’s comments to Trump, the ex-President snapped back. “I disagree with him one hundred per cent,” Trump said. “I don’t speak to him.” When we noted that Trump did, in fact, bring up that election a lot, he was defiant. “I always will,” he said.

Murdoch, as it turned out, was prophetic. Election denial, as the midterm results have just shown, is not a political winner. It’s hard to think of a time in American politics when looking to past grievances rather than the future ever has been. But Trump, on this at least, has also been true to his word. Unrepentant and determined to stay his course, results be damned, Trump has repeated his lies about 2src2src over and over again. It’s likely that, as he promised, he always will.

On Tuesday, just after 9 p.m., Trump surprised no one by announcing that he was running for President again, in a long ramble of a speech from the Mar-a-Lago ballroom that leaned heavily on anger, grievance, lies, and the grandiose braggadocio that is his trademark. Most of the speech could have been cut and pasted from one of Trump’s 2src16 campaign rallies: the evil migrants storming over the border, the craven foreign countries ripping us off, the epidemic of drugs and crime on “the blood-soaked streets of our once-great cities.” His own reign, so unfairly cut short, had been the greatest of eras. Look at what a hellscape America under Joe Biden has become.

Given the recent unpleasantness of the midterm elections, Trump was a bit lighter than might have been expected on rants about the 2src2src election that he lost. In fact, he never even mentioned his defeat, referring only to “the Pause,” as if his time out of the White House were a little vacation, a short respite at Mar-a-Lago. He did, however, manage to float a whole new conspiracy theory about the Chinese and how they might have done something to hurt him in the 2src2src race. “Just sayin’,” the ex-President offered by way of explanation. And he promised to “bring back honesty and trust in our elections.” The reference was oblique, but so what—his audience knew what he meant, and cheered.

The real surprise of the evening came forty minutes in, when even the former President had started to seem a bit bored by the clichés spilling forth from his teleprompter, and Murdoch’s Fox had had enough. After Trump started asking his audience, “Remember Angela Merkel?,” the plug was pulled. No more live, uninterrupted propaganda for Trump from the network that, more than any other, had fuelled his political rise and shaped his Presidency. Sean Hannity and his guests would talk about the speech rather than actually show it.

Trump should have been braced for this unkindest cut of all. And, indeed, for the past week, ever since Republicans’ unexpectedly poor showing in the midterm elections, the Murdoch media empire has embarked on a remarkable we-told-you-so campaign hitting Trump. The New York Post, Murdoch’s tabloid and formerly one of Trump’s biggest boosters, savaged the ex-President with a cover depicting him as “Trumpty Dumpty.” In Murdoch’s flagship Wall Street Journal, the editorial board asserted flatly, “Trump Is the Republican Party’s Biggest Loser.” On Fox, Republican guests blamed him for defeats in key races, and the network captioned their appearances with cutting chyrons like “Democrats See Trump as Easiest to Beat,” which ran hours before Trump’s Presidential announcement.

The pile-on was not, of course, confined to Murdoch and his employees. Earlier on Tuesday, Trump’s former adviser and confidant Chris Christie was reportedly cheered by Republican governors when, at their annual meeting, he gave a rousing speech that trashed Trump for dragging down the Party in three consecutive elections. Mike Pence, who went through personal and ideological contortions that are the stuff of political legend in order not to break with Trump, spent the day hawking his new memoir. The book tour has forced him to admit, however reluctantly, that even he had to break with Trump over the matter of the pro-Trump mob trying to kill him on January 6th.

It was a rare convergence of bipartisanship in American politics. How unusual, after all, is it in these divided times to see Republicans agreeing with Bernie Sanders, the democratic socialist from Vermont who said the other day, “As an American, the idea of another Trump campaign and all of his lies and divisiveness and his efforts to undermine American democracy is an absolute horror show. . . . On the other hand, I got to say that as a politician who wants to see that no Republican is elected to the White House in 2src24, from that perspective, his candidacy is probably a good thing.”

Forgive me, though, if I’m not persuaded yet. Throughout the Trump years, there have been so many moments when dumping the Don seemed entirely possible, until it didn’t: the “Access Hollywood” tape, the Helsinki press conference with Vladimir Putin, the “perfect” phone call to Ukraine’s President Volodymyr Zelensky that resulted in Trump’s first impeachment, the crazy mishandling of the COVID-19 pandemic, the January 6, 2src21, insurrection at the Capitol and Trump’s second impeachment. Why, it’s fair to ask, should this time be any different? Is losing really a bigger sin for Republicans than harassing women, blackmailing foreign leaders, or seeking to remain in power by calling forth an angry mob to attack Congress?

The week since the midterm elections has underscored an important but often overlooked fact about Trump: it was the Republican Party that made him President and it will be only the Republican Party that can kill him off politically. General-election voters—that is, Democrats and independents—have made clear over multiple elections what they think of Trump. They don’t like him. Never have, never will. He’s lost the popular vote twice, by millions. He’s dragged down candidates in the 2src18 midterms, the 2src2src general election, and now in the 2src22 midterms. It’s the G.O.P. that has continued to support and enable him. In primaries this year, Republican voters repeatedly chose Trump-anointed, election-denying extremists in competitive primaries as their nominees—flawed candidates such as Mehmet Oz, in Pennsylvania, and Herschel Walker, in Georgia, who came up short where their more conventional Republican opponents might not have. And Republican officials, including Trump skeptics like Mitch McConnell, then went ahead and endorsed those Trumpian nominees anyway, and spent millions of dollars promoting their candidacies. Trump led Republicans down the path of electoral folly; they didn’t have to follow.

Sure, there are some reassuring signs that self-preservation, if nothing else, might finally cause Republicans to forgo the chance at another four years of Trump. But a divided Republican Party is actually very much in Trump’s interest right now. It’s exactly how he came to power in the first place, beating out a field of seventeen other G.O.P. candidates in the 2src16 primaries. They did not unite behind a single rival to defeat Trump then, nor are they likely to do so now. Florida Governor Ron DeSantis—already anointed “Ron DeSanctimonious” by Trump—is being set up as Trump’s logical successor, a sort of Trump without the baggage. Polls since the midterms suggest DeSantis has gained ground with Republican primary voters beyond his home state. But Trump remains the clear leader in national surveys—including a new Politico/Morning Consult poll out on Tuesday, which had Trump leading DeSantis, forty-seven per cent to his thirty-three per cent. And there will be plenty of other Republicans who run, once again setting up a situation in which the anti-Trump vote is splintered. Pence, in book-tour mode, gave every appearance of running. Even Mike Pompeo, the former Secretary of State who was Pence’s rival in Trump-era obsequiousness, said on Tuesday that he would not step aside just because Trump is officially in the race.

“We’re going to bring people together. We’re going to unify people,” Trump said at one point in his speech Tuesday evening. It might have been his biggest whopper of the night. Still, there has been a surprisingly bipartisan consensus this week about the advisability of Trump running again: Democrats and an increasing number of Republicans now seem to agree they’d prefer that he not do so. Sixty-five per cent of Republicans in that Politico/Morning Consult poll, in fact, said they didn’t really want Trump to run again in 2src24. But so what? He is running, and their lack of enthusiasm for Trump never stopped them from voting for him before.

Donald Trump does not care if they don’t like him. He does not care if you call him a liar, a cheat, a fraud, and a huckster. But, as the past two years have shown, he is willing to do anything, including blow up the foundations of American democracy, if you declare him a loser. ♦