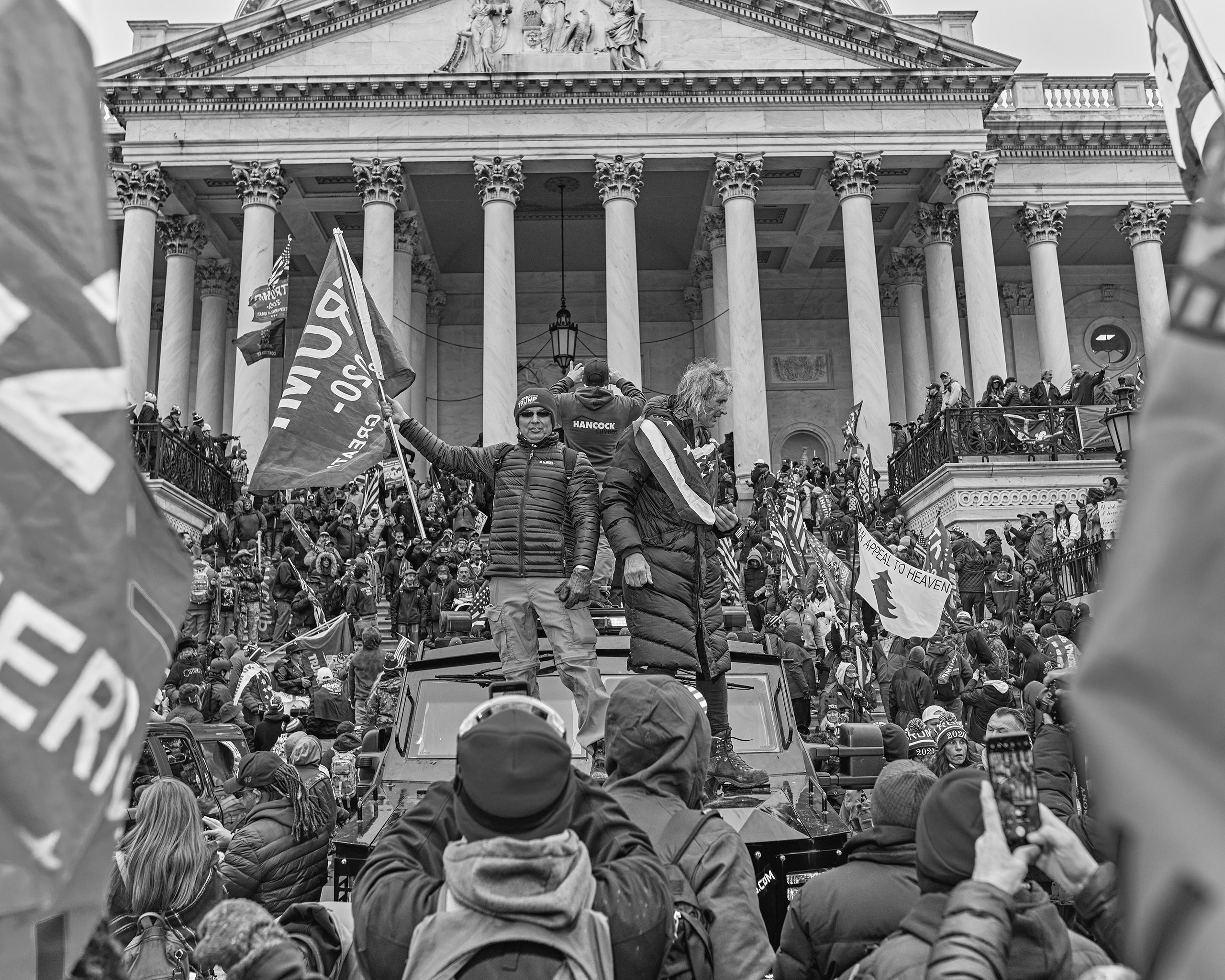 The New Yorker is publishing the full report of the House Select Committee to Investigate the January 6th Attack, in partnership with Celadon Books. The edition contains a foreword by the magazine’s editor, David Remnick, which you’ll find below, and an epilogue by Representative Jamie Raskin, a member of the committee. Order the full report.

In the weeks while the House select committee to investigate the insurrection at the Capitol was finishing its report, Donald Trump, the focus of its inquiry, betrayed no sense of alarm or self-awareness. At his country-club exile in Palm Beach, Trump ignored the failures of his favored candidates in the midterm elections and announced that he was running again for President. He dined cheerfully and unapologetically with a spiralling Kanye West and a young neo-fascist named Nick Fuentes. He mocked the government’s insistence that he turn over all the classified documents that he’d hoarded as personal property. Finally, he declared that he had a “major announcement,” only to unveil the latest in a lifetime of grifts. In the old days, it was Trump University, Trump Steaks, Trump Ice. This time, he was hawking “limited edition” digital trading cards at ninety-nine dollars apiece, illustrated portraits of himself as an astronaut, a sheriff, a superhero. The pitch began with the usual hokum: “Hello everyone, this is Donald Trump, hopefully your favorite President of all time, better than Lincoln, better than Washington.”

In his career as a New York real-estate shyster and tabloid denizen, then as the forty-fifth President of the United States, Trump has been the most transparent of public figures. He does little to conceal his most distinctive characteristics: his racism, misogyny, dishonesty, narcissism, incompetence, cruelty, instability, and corruption. And yet what has kept Trump afloat for so long, what has helped him evade ruin and prosecution, is perhaps his most salient quality: he is shameless. That is the never-apologize-never-explain core of him. Trump is hardly the first dishonest President, the first incurious President, the first liar. But he is the most shameless. His contrition is impossible to conceive. He is insensible to disgrace.

On December 19, 2src22, the committee spelled out a devastating set of accusations against Trump: obstruction of an official proceeding; conspiracy to defraud the nation; conspiracy to make false statements; and, most grave of all, inciting, assisting, aiding, or comforting an insurrection. For the first time in the history of the United States, Congress referred a former President to the Department of Justice for criminal prosecution. The criminal referrals have no formal authority, though they could play some role in pushing Jack Smith, the special counsel appointed by Attorney General Merrick Garland, to issue indictments. The report certainly adds immeasurably to the wealth of evidence describing Trump’s actions and intentions. One telling example: The committee learned that Hope Hicks, the epitome of a loyal adviser, told Trump more than once in the days leading up to the protest to urge the demonstrators to keep things peaceful. “I suggested it several times Monday and Tuesday and he refused,” she wrote in a text to another adviser. When Hicks questioned Trump’s behavior concerning the insurrection and the consequences for his legacy, he made his priorities clear: “Nobody will care about my legacy if I lose. So, that won’t matter. The only thing that matters is winning.”

Trump has been similarly dismissive of the committee’s work, going on the radio to tell Dan Bongino, the host of “The Dan Bongino Show,” that he had been the victim of a “kangaroo court.” On Truth Social, his social-media platform, he appealed to the loyalty of his supporters: “Republicans and Patriots all over the land must stand strong and united against the Thugs and Scoundrels of the Unselect Committee…. These folks don’t get it that when they come after me, the people who love freedom rally around me. It strengthens me. What doesn’t kill me makes me stronger.”

Experience makes it plain that Trump will just keep going on like this, deflecting, denying, lashing out at his accusers, even if it means that he will end his days howling in a bare and echoing room. It matters little that the report shows that even members of his innermost circle, from his Attorney General to his daughter, know the depths of his vainglorious delusions. He will not repent. He will not change. But the importance of the committee’s report has far less to do with the spectacle of Trump’s unravelling. Its importance resides in the establishment of a historical record, the depth of its evidence, the story it tells of a deliberate, coördinated assault on American democracy that could easily have ended with the kidnapping or assassination of senior elected officials, the emboldenment of extremist groups and militias, and, above all, a stolen election, a coup.

The committee was not alone in its investigation. Many journalists contributed to the steady accretion of facts. But, with the power of subpoena, the committee was able to uncover countless new illuminating details. One example: In mid-December, 2src2src, the Supreme Court threw out a lawsuit filed by the State of Texas that would have challenged the counting of millions of ballots. Trump, of course, supported the suit. He was furious when it, like dozens of similar suits, was dismissed. According to Cassidy Hutchinson, who worked directly for Mark Meadows, the White House chief of staff, Trump was “raging” about the decision: “He had said something to the effect of, ‘I don’t want people to know we lost, Mark. This is embarrassing. Figure it out. We need to figure it out. I don’t want people to know that we lost.’”

In large measure, this report is the story of how Trump, humiliated by his loss to Joe Biden, conspired to obstruct Congress, defraud the country he was pledged to serve, and incite an insurrection to keep himself in power.

The origins of the committee and its work are plain: On January 6, 2src21, thousands marched on the Capitol in support of Trump and his conspiratorial and wholly fabricated charge that the Presidential election the previous November had been stolen from him. Demonstrators breached police barricades, broke through windows and doors, and ran through the halls of Congress threatening to exact vengeance on the Vice-President, the Speaker of the House, and other officeholders. Seven people died as a result of the insurrection. About a hundred and fourteen law-enforcement officers were injured.

Half a year later, the House of Representatives voted to establish a panel charged with investigating every aspect of the insurrection—including the role of the former President. An earlier attempt in the Senate to convene an investigative panel had met with firm resistance from the Minority Leader, Mitch McConnell, who called it an “extraneous” project; despite support from six Republican senators, it failed to get the sixty votes required. It was left to the Democratic leadership in the House to form a committee. The vote, held on June 3src, 2src21, was largely along party lines, but the U.S. House Select Committee to Investigate the January 6th Attack on the United States Capitol officially came into existence.

Speaker Nancy Pelosi then asked the Republicans to name G.O.P. members to join the panel. The House Minority Leader, Kevin McCarthy, responded by proposing some of the most prominent election deniers in his caucus, including Jim Jordan, of Ohio, who had attended “Stop the Steal” demonstrations and was sure to behave as an ardent obstructionist. Pelosi, who had named Liz Cheney, of Wyoming, to the panel, rejected two of McCarthy’s five recommendations, saying, “The unprecedented nature of January 6th demands this unprecedented decision.” After conferring with Trump, McCarthy refused to provide alternatives, and abruptly withdrew all of his proposals, gambling that doing so would derail or discredit the initiative. Pelosi, in turn, asked a second Republican who had, with Cheney, voted to impeach the President on a vote held on January 13th—Adam Kinzinger, of Illinois—to serve on the committee. Both Cheney and Kinzinger accepted.

Cheney, a firm conservative and the daughter of former Vice-President Dick Cheney, had made her judgment of Trump well known. “The President of the United States summoned this mob, assembled the mob, and lit the flame of this attack,” she said not long after the insurrection. “Everything that followed was his doing.” She knew that by opposing Trump and joining Kinzinger and the Democrats on the committee she was almost sure to lose her seat in Congress. She didn’t care, she said later, declaring her work on the panel, on which she served as vice-chair, the “most important” of her career. The G.O.P. leadership was unimpressed with this declaration of principle. In February, 2src22, the Republican National Committee censured both Cheney and Kinzinger.

In deciding how to proceed with its investigation, the committee’s chairman, Bennie G. Thompson, of Mississippi, along with Liz Cheney and the seven other members, looked to a range of similarly high-profile investigative panels of the past, including the so-called Kefauver Committee, which investigated organized crime, in 195src-51; the President’s Commission on the Assassination of President John F. Kennedy, known as the Warren Commission, in 1963-64; the Senate Watergate hearings, in 1973; the Iran-Contra hearings, in 1987; and, particularly, the 9/11 Commission, in 2srcsrc2-src4. The committee hired staff investigators who had worked in the Department of Justice and in law enforcement, and they conducted more than a thousand interviews. Teams were color-coded and tasked with making “deep dives” into various aspects of January 6th. The division of labor included a “blue team,” which examined the preparation for and the reaction to events by law enforcement; a “green team,” which examined the financial backing for the plot; a “purple team,” which conducted an analysis of the extremist groups involved in the storming of the Capitol; a “red team,” which studied the rally on the Ellipse and the Stop the Steal movement; and a “gold team,” which looked specifically at Trump’s role in the insurrection.

Committee members also insisted on inquiring into whether Trump planned to use emergency powers to overturn the vote, call out the National Guard, and invoke the Insurrection Act. Was Trump’s inaction during the rioting on Capitol Hill merely a matter of miserable leadership, or was it a deliberate strategy of fomenting chaos in order to stay in the White House? “That dereliction of duty causes us real concern,” Thompson said. In this way, an inquiry into a specific episode broadened to encompass a topic of still greater significance: Had the President sought to undermine and circumvent the American system of electoral democracy?