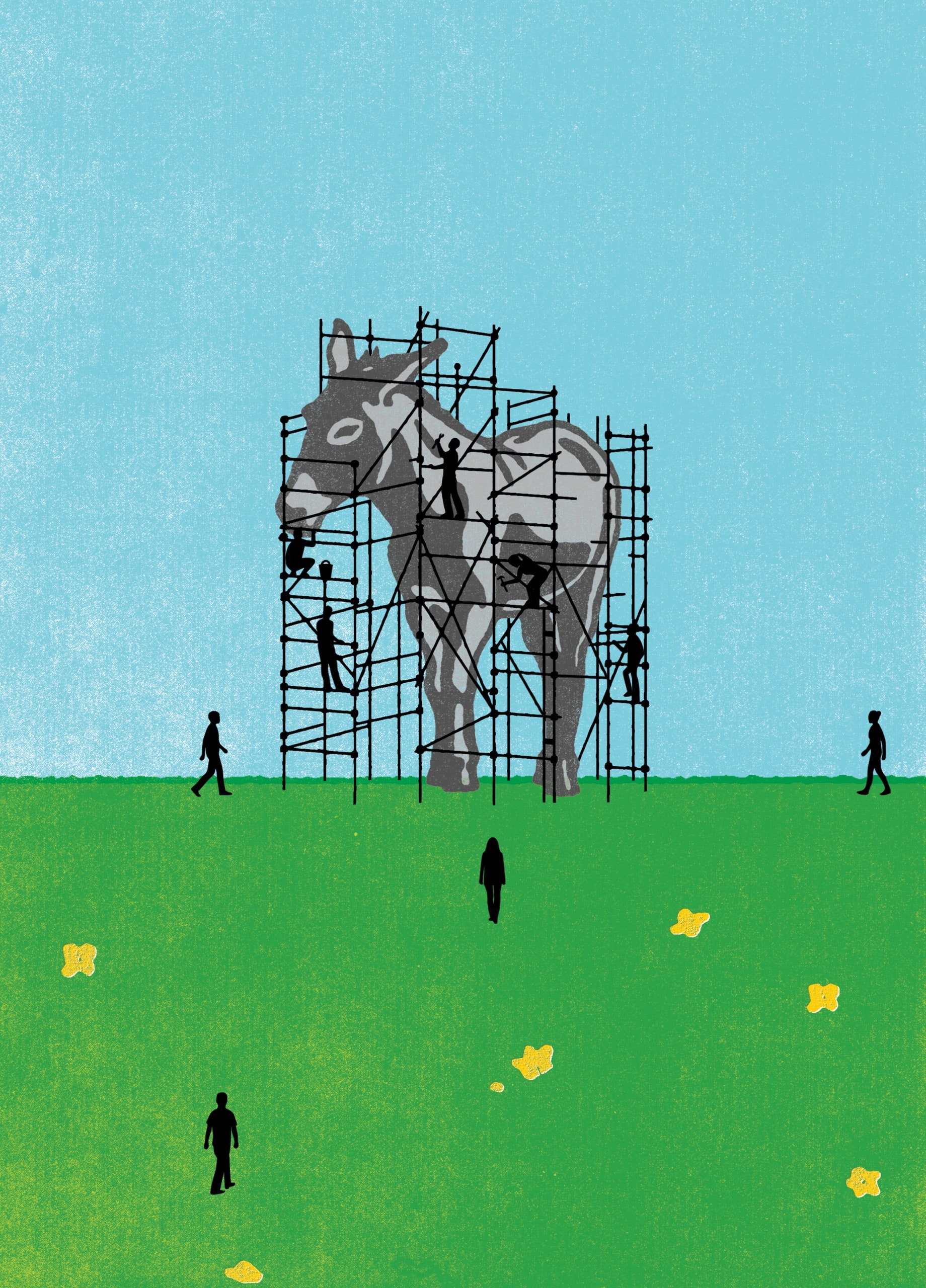 After the event outside the abortion clinic, Hassan went to the city of Laconia, half an hour north of Concord, to visit small businesses. She was joined by the city’s mayor, a political ally of hers named Andrew Hosmer, who served two terms in the State Senate when Hassan was governor; he led the Senate Democratic caucus, but he lost his seat in 2src16. “I remember Election Day,” he told me. “At 7 a.m., there were people lined up at my polling place, wearing costumes, holding signs, singing”—Trump voters. “I saw that at every polling place in my district. They were passionate. I said, ‘This doesn’t bode well for me.’ ”

Hosmer ran for mayor after losing his State Senate seat, and won. In 2src21, he was reëlected with seventy-three per cent of the vote, even though Trump, as he had in 2src16, carried Laconia in 2src2src. “I realized after 2src16 that I should focus on what people in this community need,” he said. “Don’t get disenchanted. I promised to work within a tax cap. This is what people here want—though I would love to spend money on projects. It’s also about being face to face. It’s hard to hate when you’re face to face with someone. I’d like to show people that government can work really well. We can deliver. Somewhere in there, there’s a secret sauce.”

Walking through Laconia with a couple of staff members and a small press corps, Hassan and Hosmer stopped at a record store, a coffee shop, and a florist, all independent small businesses. (While she and Hosmer were crossing the street, a guy driving by stuck his head out the window, and I heard him yell, “All politicians are crooks!”) Hassan, who spoke from a prepared script at the other events of hers that I attended, was visibly more comfortable in this setting. She took her time in each shop, talking to the owners at length, as if, with control of the United States Senate at stake, she weren’t involved in anything more important than listening to them. “What can we do to help?” she’d ask. She talked about the work she does with Republican colleagues in Washington on issues like supply chains, community-college tuition, and workforce shortages. “Hassan is the pragmatic center of the state,” Hosmer had told me beforehand. “The political landscape is littered with people who underestimated Maggie Hassan.”

Nevada Democrats, whose constituents are mainly blue-collar nonwhite residents, and New Hampshire Democrats, whose constituents are mainly white residents with small-government leanings, have a few things in common. They relentlessly emphasize the everyday practical benefits that the Party provides for its constituents. They are obsessively concerned with organizing, and especially with door-to-door, in-person campaigning. They try their best to get extreme Republicans as opponents. And, at least when I was visiting, they hardly ever mentioned their support for the Biden Administration’s major legislation. That’s partly because Biden isn’t very popular, and partly because of their conviction that voters, particularly in closely contested states, don’t care about whatever great changes are afoot in American government. But that doesn’t mean there is no connection between what the Biden Administration has been doing and the way Democrats in purple states run for office. Both are animated by a critique, implied rather than directly stated, of past Democratic Party policies and politics. As Biden himself put it in a speech last year, “We’re now forty years into the experiment of letting giant corporations accumulate more and more power. And what have we gotten from it? Less growth, weakened investment, fewer small businesses. Too many Americans who feel left behind. Too many people who are poorer than their parents.” Politicians on the ground and a rising generation of policymakers in Washington are trying to reposition the Democratic Party as more focussed on the daily lives of the working-class voters it has been losing. For the economic-policy branch of the Party, that amounts to a revolution, one that hasn’t been sufficiently noticed.

In the summer of 2src17, the Washington Post published a revealing profile of Jake Sullivan, the Biden Administration’s national-security adviser, by Greg Jaffe. Sullivan had been a close aide to Hillary Clinton, and was expected to become national-security adviser four years earlier than he actually did. Jaffe wrote, “Sullivan, more than most in the Clinton orbit, has begun to shoulder blame for the loss and his role in it. He wants to understand his mistakes and figure out how to fix them.” In particular, he was rethinking his automatic support for the internationalism that the élites of both parties believed in deeply and which was, as Trump showed, deeply resented in much of the country. Sullivan wondered if it had been a mistake for him to work on the Trans-Pacific Partnership, which Trump had run against and then ditched as soon as he took office. Sullivan said that he was thinking about moving somewhere far away from Washington, so that he wouldn’t be so out of touch with the mood of the country.

Five years later, in the Republican Party, the foreign-policy establishment has been fully excommunicated, and the economic establishment has made a possibly unstable peace with Trump, despite his lack of enthusiasm for traditional Republican causes like free trade and limiting government spending. In the Democratic Party, the establishment lives on, but in a significantly altered form, and with a keen awareness of its past mistakes. At a recent private meeting of influential Democrats, Sullivan was the featured speaker; he said the economic promises that Trump had made in 2src16 and mainly abandoned once he took office were actually being fulfilled by the Biden Administration. It’s easy to guess at some of what Sullivan had in mind. Just a few weeks into the Biden Administration, he and Antony Blinken, the Secretary of State, publicly excoriated their Chinese counterparts at a meeting in Alaska; a favorite accusation of Trump’s was that the Democrats were excessively friendly to China, at the cost of American jobs. This year, Biden signed into law the CHIPS and Science Act, which is meant to, among other things, move the manufacturing of semiconductor technology from China to the United States.

When Biden took office, his initial economic-stimulus package, the American Rescue Plan, was more than double the size of the package that Obama pushed through in his early weeks in office, even though, back in 2srcsrc9, the Democrats controlled both houses of Congress and the financial crisis was dominating headlines. This was because of a retrospective sense among Democratic political strategists and economic policymakers that the Obama stimulus had been too small, and that he had paid a severe price for that mistake, both economically, in the severity of the recession, and politically, in the shellacking the Democrats took in the 2src1src elections. High levels of spending are just the beginning of the list of economic policies that used to be off the table for Democrats but aren’t anymore. The Party has few unapologetic free-trade advocates these days. Biden’s partial cancellation of student-loan debt, highly unpopular in the business wing of the party, would have been inconceivable in the Obama Administration. The idea of the government’s taking responsibility for building up specific industries and regions, also known as industrial policy, was disreputable for decades, and is now being enacted—for example, in the CHIPS Act, in the climate-change provisions of the Inflation Reduction Act, and in last year’s infrastructure bill. “I remember when, if you talked about industrial policy, people would look at you like you had three heads, if they even knew what it was,” Felicia Wong, the C.E.O. of the Roosevelt Institute, a progressive economic-policy think tank, told me. “Now it’s suddenly the new new thing.” Brian Deese, the director of Biden’s National Economic Council, has made two speeches endorsing industrial policy; in one of them, he called it a “critical and urgent imperative for the United States.”

Back in 1964, the historian Richard Hofstadter published an essay titled “What Happened to the Antitrust Movement?” His idea was that government trust-busting was a sepia-tinted cause from the late nineteenth century, long since replaced by technical macroeconomic management. The Democratic Party dropped antitrust from its platform in 1992, and didn’t restore a broad endorsement of the principle until 2src16. Today, three of the most prominent advocates of forceful antitrust policy—Jonathan Kanter, Lina Khan, and Tim Wu—occupy high positions in the Biden Administration. Senator Amy Klobuchar, of Minnesota, who ran for President in 2src2src, has introduced new antitrust legislation and also published a book called “Antitrust.” “It’s about salvaging free markets,” she told me. “It always has been. What Biden is doing, by putting in people who are aggressive, is protecting the free market from monopolies.” Two of the three members of the White House Council of Economic Advisers, Heather Boushey and Jared Bernstein, come from the Democrats’ left wing on economic policy, which was minimally represented in the Clinton and Obama Administrations; conversely, Democratic centrists like Lawrence Summers and Timothy Geithner are not in this Administration. Clinton and Obama both made special efforts to get the federal government from deficit to surplus; Biden hasn’t produced a balanced or surplus budget yet. Biden is more vocally pro-union than any President in recent memory. “During the 2srcsrc8 campaign, I asked that the word ‘union’ be put in speeches, and the message people wouldn’t let that word come out of his mouth,” a former Obama adviser told me. “This President talks about it all the time.”

One reason for all this ferment is that the Democrats’ progressive wing is far more empowered and active today than it was when Obama took office, so it is a more significant source of pressure on the Administration. “There’s a generation in Democratic policy circles who, like me, experienced the foreclosure crisis up close and personal,” Sarah Miller, who was working in the Department of the Treasury during the crisis, and has since founded an organization called the American Economic Liberties Project, told me. “We watched the solutions that were put in place fail to alleviate suffering. We are reflecting on the mistakes of that era and beginning to embed what we learned in Democratic policy.” Trump’s election, as Miller put it, “blew open the door to our critique.” Post-Trump, the Republicans are actively competing with the Democrats for the loyalties of working-class voters. Republican campaigns are centered on cultural issues in part because the Party’s traditional small-government, pro-big-business economic stance won’t play well with the voters it is now trying to attract. What’s noteworthy about the recent addition of “woke corporations” to the standard list of Republican bogeymen is not wokeness—it’s corporations, which used to be exempt from Republican attack. It seems unimaginable today that a leading Republican would launch a crusade to privatize Social Security, as George W. Bush did, with disastrous results, just after he was reëlected, in 2srcsrc4.