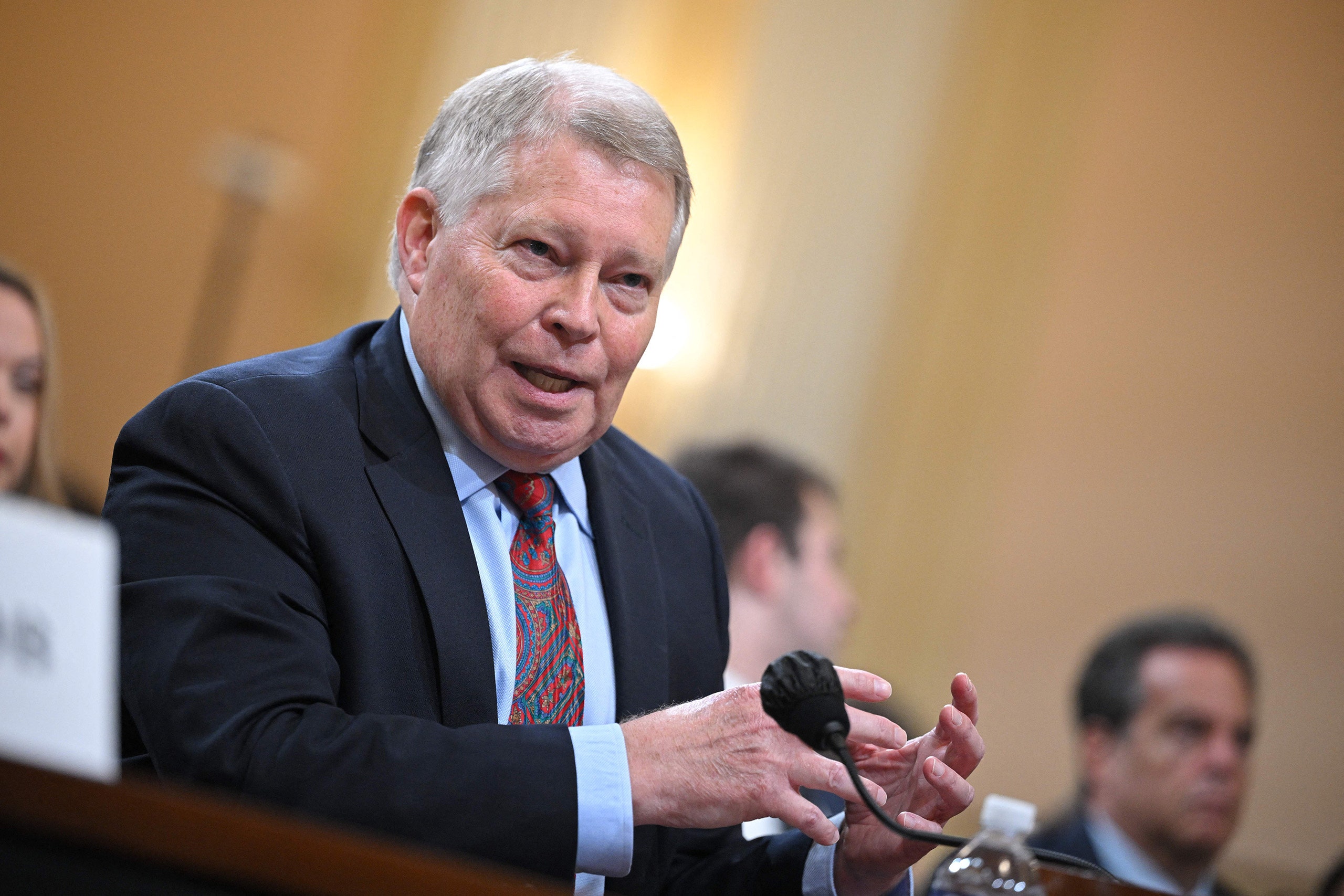 A powerful new litigant has joined one of the most momentous cases slated to be heard by the Supreme Court this term. The respondents in the case of Moore v. Harper filed a brief today that included a surprising new signatory: J. Michael Luttig, who has been known for years as perhaps the most conservative Republican judge in the country. Now, though, he has joined a coalition of veteran lawyers and nonpartisan government-watchdog groups who are fighting against a far-right Republican election-law challenge—one so radical that critics say it has the potential to end American democracy as we know it.

The former judge is a surprising co-counsel to Neal Katyal, the well-known Supreme Court litigator. Katyal is a counsel of record in the case for several respondents, including Common Cause and the North Carolina League of Conservation Voters, that are opposing the far-right groups. The case is scheduled to be heard by the Court on December 7th. Luttig told me that he signed on as Katyal’s co-counsel because he regards Moore v. Harper as “without question the most significant case in the history of our nation for American democracy.” Putting it more colloquially, he said, “Legally, it’s the whole ballgame.”

Having such a well-known conservative former jurist argue against the election-law challenge may carry some weight with the conservative super-majority on the Court, several of whom have ties to Luttig that stretch back decades. Justice Clarence Thomas, for instance, was personally shepherded through his contentious Supreme Court confirmation hearings by Luttig in 1991. At the time, Luttig served as the Assistant Attorney General in charge of the Office of Legal Counsel in George H. W. Bush’s Justice Department. After Thomas was confirmed, Luttig himself was sworn in to a seat on the U.S. Court of Appeals for the Fourth Circuit at the age of thirty-seven; he became, at that moment, the youngest federal appellate judge in the country.

Luttig’s ties to Chief Justice John Roberts also go back years. The two worked closely together in the Reagan Administration as young lawyers, both under the tutelage of then White House counsel Fred Fielding, and again together as lawyers in the George H. W. Bush Department of Justice. Later, in 2srcsrc5, George W. Bush considered them simultaneously for a seat on the Supreme Court, which ultimately went to Roberts. The following month, Bush again considered Luttig for a Supreme Court seat but chose Samuel Alito. After establishing a reputation as a hard-right standard-bearer in the mold of the late Antonin Scalia on the appeals court, Luttig became the general counsel of Boeing; in 2src2src, he retired.

The evolution of Luttig’s political role since then has been remarkable. While some might assume that he has abandoned his conservative views, his position is more of a reflection of the radical changes that have overtaken the Republican Party. A judge who once represented the far-right pole in jurisprudence now looks like a throwback to an earlier age of G.O.P. probity and restraint. Ordinarily, Luttig told me, he wouldn’t get involved in a case like this. But Moore v. Harper, he explained, is the natural outgrowth of the extraordinary behind-the-scenes role he played in the final Götterdämmerung days of the Trump Presidency.

On the evening of January 4, 2src21, Luttig was asked to weigh in as an emergency outside legal expert to Vice-President Mike Pence, whom Trump was pressuring not to certify Biden’s Electoral College victory. Luttig emphatically advised the Pence team that the Vice-President had no choice. The Constitution clearly stated that the Vice-President’s only role was ceremonial. Luttig stressed that Pence had to certify the 2src2src Electoral College vote, in defiance of Trump’s attempted coup. But, in the early morning of January 5th, as the pressure from Trump continued to rise, Pence’s advisers contacted Luttig. They told him, while he was holed up in his vacation home in Colorado, that he needed to share with the American public his view that, under the Constitution, Pence had to certify Biden’s Electoral College win.

A retired sixty-six-year-old lawyer stuck in Colorado at the time, Luttig recalled telling Pence’s lawyer, “I don’t even have a job right now. I’m unemployed. . . . I don’t have a fax machine.” Eventually, Luttig decided he would tweet, but he told me he had no idea how to do so. He called his son, who works in tech, but he was too busy to explain, so he sent him Twitter’s online instructions. Luttig’s tweet, when it finally posted, was published on the Times Web site, and later quoted by Pence in his letter to Congress on January 6th, leading to the historic standoff between the President and Vice-President. Luttig’s role was crucial because of his unique standing. The lawyer who had improperly advised Trump that Pence had the legal power to delay, and perhaps overturn, the election, was one of Luttig’s own former law clerks: John Eastman. Eastman’s rogue legal theory was based, in part, on a fringe-right reading of the Constitution called the independent-state-legislature theory. Its proponents, including Eastman, claimed that state legislatures had the authority to reject the results of the 2src2src election that were certified by other state officials and the courts. It wasn’t lost on those involved at the time that the majority of state legislatures were dominated by Trump’s Republican Party.

“The independent-state-legislature theory was the centerpiece of the former President’s effort to overturn the 2src2src election,” Luttig told me. “In advising Vice-President Pence on January 6th, I concluded that there was no such doctrine of constitutional interpretation.” Luttig added, “From that day, I have believed I had an obligation to the country to explain the reasons for that conclusion. Namely, there is literally no support at all in the Constitution.” In fact, Luttig said, the theory is “antithetical to the Framers’ intent, the text, and the Constitution’s fundamental design and architecture.”

Since then, Luttig has, in a scholarly, judicious way, continued to sound the alarm. Last June, Luttig surprised many who had dismissed him as a Republican partisan by publicly testifying to the House select committee investigating the January 6th riot that Trump and his apologists posed a “clear and present danger” to American democracy.

Among those who were impressed by Luttig’s testimony was Katyal. As a counsel of record in Moore v. Harper, Katyal declined to comment. But, last winter, Katyal said on MSNBC, “There’s a good argument that Judge Luttig, by not being on the Supreme Court, did more for our democracy than most any sitting Supreme Court Justice or past one. It’s a remarkable, amazing thing.” The two lawyers had a mutual friend, and soon began to talk about collaborating if the right case presented itself. Moore v. Harper was that opportunity. “It was meant to be,” Luttig told me.

As Luttig explained it, the case potentially threatens the way that American elections are decided. Moore v. Harper involves another iteration of the fringe independent-state-legislature theory, which holds that both the Elections and Electors clauses of the Constitution give state legislatures near unilateral power to manage elections. As I wrote last year in this magazine, the theory is grounded in a little-noticed concurring opinion written by three conservative Justices, including Thomas, in the Supreme Court’s Bush v. Gore decision in 2srcsrcsrc. It was ignored for the most part until Trump’s allies tried to use it in their frantic efforts to overturn the 2src2src election. Proponents of the far-right theory claim that state legislatures, which are among the country’s most disproportionately partisan bodies, have nearly unchecked power to gerrymander districts, and to choose their state’s electors in Presidential elections.