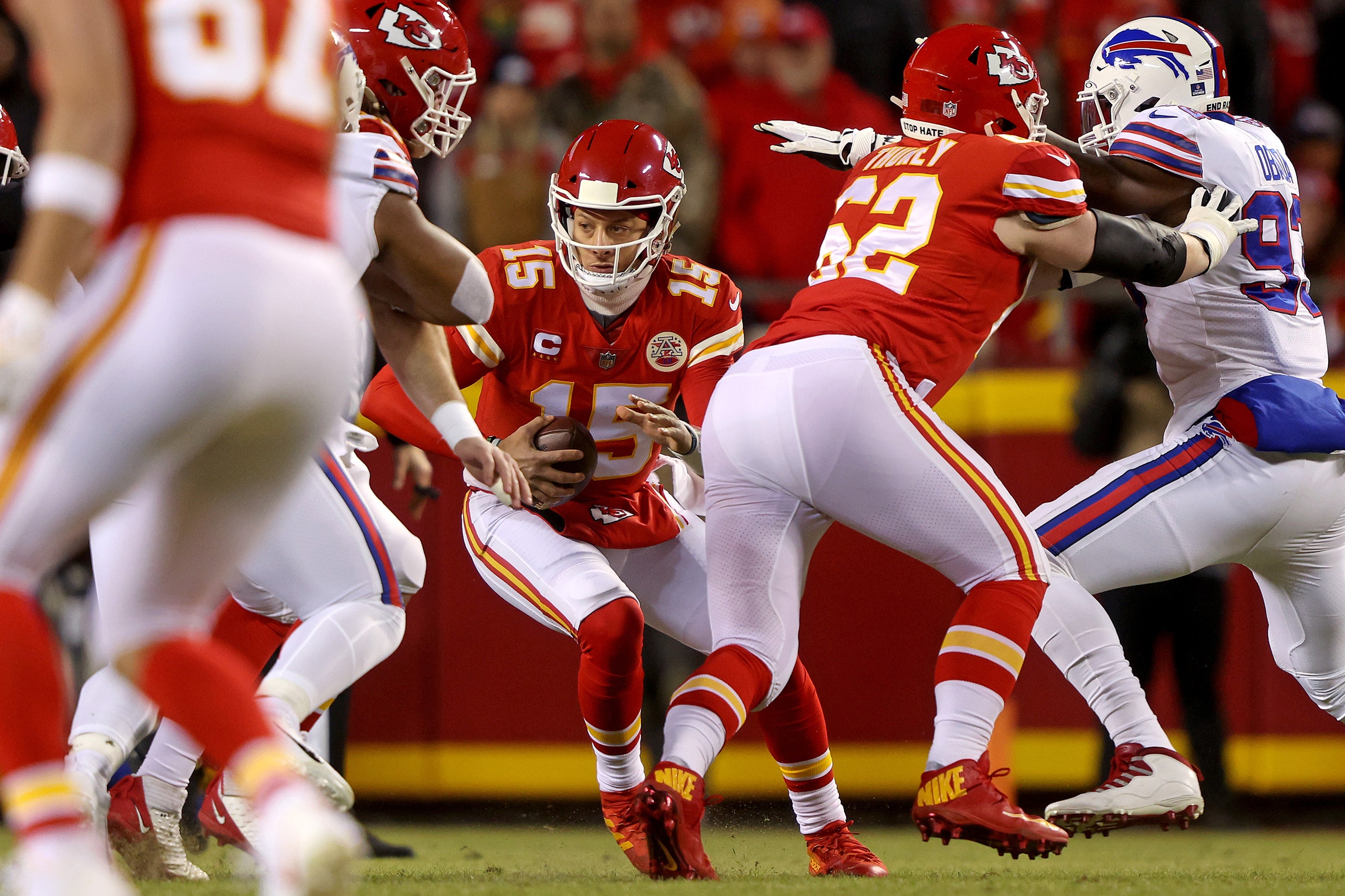 When a quarterback whose team is trailing by five, with less than two minutes to play in the fourth quarter, dances in the pocket and then throws a dart twenty-seven yards to an open receiver in the end zone, as the Buffalo Bills’ quarterback, Josh Allen, did on Sunday night, it is rare and ridiculous to hear some tiny voice in the back of your head saying, “Maybe he should have scrambled for a first down there instead of going straight for the score.” But the Kansas City Chiefs’ 42–36 win over the Bills was one of the rarest and most ridiculous of games, and everyone knew that Buffalo had left too much time on the clock to feel that its lead was secure. For the Chiefs’ quarterback, Patrick Mahomes, a minute and fifty-four seconds might as well have been all night. Mahomes can roll out right and throw a submarine sinker through a sea of defenders and somehow find his target; he can, while dropping backward under pressure, leap up to see an almost-open receiver in the end zone and then make the throw in midair. He has a preternatural awareness of the field, his body, and the clock. The question was not whether the Chiefs would be able to set up a field goal to send the game into overtime or score a touchdown to win it, but whether the Bills would have enough time to score yet again when they, inevitably, got the ball back.

And so it happened: Mahomes found the receiver Tyreek Hill up the field, and Hill did the rest, flashing a peace sign as he rushed past the Bills’ defense, his legs a blur. Buffalo, now down by four, had just over a minute to counter, and seventy-five yards to go. The Chiefs had Mahomes, but the Bills had Allen, and Allen had been matching Mahomes all day. Whereas Mahomes wins with flair, imagination, and charisma, Allen dominates with his size, his legs, and his bruising strength. (Few quarterbacks seem like one of the most physical players on an N.F.L. field, but Allen does.) Mahomes had Hill and Travis Kelce nimbly catching his passes, but Allen had Gabriel Davis getting open again and again. It was obvious where Allen would throw the ball, and still no one could stop Davis from reaching it. One completion to Davis gained twenty-eight yards. Another gained twelve. Then, with seventeen seconds left, Allen and Davis did it again, from the nineteen-yard line: Davis ran the perfect route, and Allen let fly the perfect throw. Touchdown, Buffalo. There were thirteen seconds left in the game.

That should have ended things: no one can beat the clock. Last week, the Cowboys had one second more, and their quarterback, Dak Prescott, couldn’t even get off a successful quarterback draw. It seemed clear that the Bills should squib the kick and burn the clock, but they chose, instead, to kick the ball through the end zone, pinning the Chiefs farther back but erasing no time at all. But bad field position is notional when you have Patrick Mahomes. The Bills then made another curious decision, guarding against a touchdown while rushing Mahomes, encouraging him to do what he already wanted: get the ball out quickly and gain ground midfield. Two plays and ten seconds later, the Chiefs had moved forty-four yards. A forty-nine-yard field goal evened the score just before the clock ran out.

From there, the game, per the N.F.L.’s absurd overtime rules, came down to the flip of a coin. The Chiefs won the toss and elected to receive, and Mahomes, of course, drove up the field and threw a touchdown pass, to Kelce. The Bills never got the ball back, which was both patently unfair and somehow appropriate. A coin flip was just about what separated these two quarterbacks. There was little doubt that the Chiefs’ supercharged offense could score against the Bills’ exhausted defense, just as there would have been little doubt that the Bills would have done the same if the flip had gone their way. After all, the two teams had combined for twenty-five points in the last two minutes of regulation alone.

Still, a more satisfying finish, at least for those of us not rooting specially for either the Bills or the Chiefs, would have been no finish at all. In a better world, the game would have persisted, in ever wilder fashion. At some point, exhaustion would have set in—for me, at least, if not for the two quarterbacks. At some point, there might have been an interception, or a fumble, or a devastating sack. Games end. Clocks run out. There are winners and losers. Later, there will be a Super Bowl champion. But, for a few minutes at least—which stretched and stretched, thinning time until it lost its meaning—I could forget all that. The score set the stakes, but only these moments mattered.