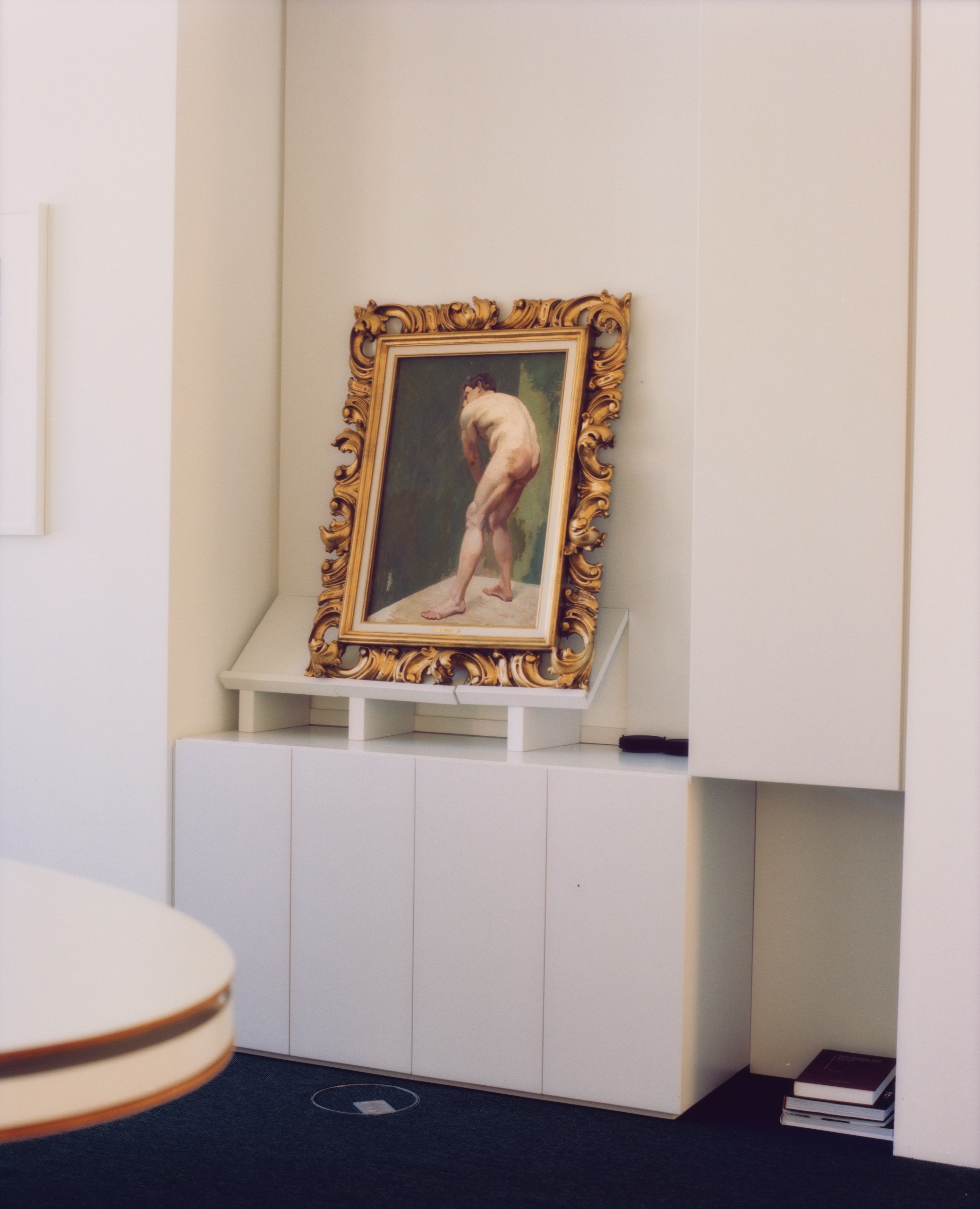 In the spring of 1997, an art collector in Geneva received a call from a contact at the city’s office of bankruptcies and legal proceedings. There was an auction coming up, of an estate that had gone unclaimed for nine years, and among the lots was a painting that the collector might want to take a look at: a canvas attributed to the British artist Lucian Freud. The collector was a businessman, originally from North Africa, who was used to picking up furniture and art works at competitive prices from Geneva’s plentiful array of galleries, antique dealers, and salesrooms. He is keen to preserve his privacy, so I will call him Omar.

Omar went to see the painting that day, at the auction house in Carouge, a suburb to the south of the city. The estate had belonged to a man named Adolfo di Camillo, who died in 1988. According to auction records, di Camillo appeared to have been a collector, too. In the seventies, he had sold a seventeenth-century painting of Pan, the Greek god of shepherds, that was once believed to be a Rubens.

The work attributed to Freud was a medium-sized, naturalistic oil portrait of a naked man, painted from the side and from behind. Parts of the background appeared unfinished, or hastily sketched, but the figure itself was skillfully captured, with a certain power. “Oh, it’s interesting, it’s strong,” Omar recalled saying to himself.

The bankruptcy office had attached an estimate of five hundred thousand Swiss francs (about three hundred and fifty thousand dollars) to the work. At the time, a recognized Freud portrait of a named sitter could fetch three times that amount. Omar asked his contact to hold it back, as one of the final lots of the sale, so that the room would be quieter. On the afternoon of March 7th, Omar bought the painting for less than a hundred thousand Swiss francs, or seventy thousand dollars. He also picked up one of di Camillo’s side tables, a lampshade, and a bronze sculpture in the style of Giacometti.

“After I bought the painting, I went home and put it in the rest of my collection and I forgot about it,” Omar told me in French when we met, earlier this year, at an expensive hotel on the lakefront in Geneva. He wore a Harrods baseball cap and was carrying a plastic bag. For years, Freud’s searching, candid portraits went against the overwhelming appetite of the contemporary art market, which was for abstraction. Although he was a famous painter in England, in part because of his surname (Sigmund, his grandfather, went to London as a refugee in 1938), Freud was a respected rather than a fashionable artist in Europe. In 2srcsrc2, Omar watched a program about his career on Swiss television, which prompted him to learn more about the painting. So he put it on eBay.

Omar posted the ad on the evening of Saturday, November 3srcth. The item description read “Lucian Freud Painting.” Omar told me that he didn’t intend to sell the work; rather, he hoped to flush out information. “To do a reconnaissance,” he said. Four days later, Omar got a message from the auction site: his item had been blocked because of a copyright complaint. He called eBay’s office in France, and was told that the complaint had come from the artist.

According to Omar, a few days later the phone rang in his apartment. It was early in the afternoon. “I said, ‘Hello, hello,’ and after a long time I heard a voice: ‘I am Freud, Lucian Freud,’ ” Omar recalled. The voice, speaking in English, but with a Germanic rasp, said that he was the rightful owner of Omar’s painting and that he wanted it back. (Omar had put his phone number on the eBay ad.) Omar says that Freud offered him a hundred thousand Swiss francs, which he declined.

Three days later, the voice called back. This time, according to Omar, the man was angry. Freud was eighty years old at the time. The caller offered Omar twice what he had paid for the painting, but still the collector refused to sell. “ ‘No. Sorry,’ ” Omar remembered saying. “ ‘I am loving this painting. I am loving this.’ He said, ‘Fuck you.’ He said, I remember, ‘You will not sell the painting all your life.’ And he hung up.”

Omar has been trying to unravel the meaning of this call—and have his painting authenticated—for the past twenty years. Owning a disputed, possibly wildly valuable, art work is a cruel test of any person’s aesthetic values, basic reason, and innate (often well-disguised) capacity for greed. Close your eyes and there are millions of dollars hanging on the wall. Open them, and there is nothing to see. Hope flares, dies for years at a time, then sparks again, at odd moments. The question of authorship can be both maddeningly simple and frighteningly difficult to resolve. Laboratories and lawyers might tell you what you want to hear, and charge you by the hour. Omar always projected confidence when we spoke. “There is a beautiful story behind this painting,” he told me more than once. But there were days this year when I wished that I had never heard of it at all.

In July, 2srcsrc5, Omar shipped the portrait to London, where it was examined by Freud’s longtime confidant and biographer, William Feaver. By this time, Omar was wondering if it could be a self-portrait, noting a similarity between the face of the figure and photographs of Freud from the fifties and sixties. In customs documents, he declared the value of the painting to be a million Swiss francs.

Feaver gave it the thumbs-down: the feet were unfinished, which was unlike Freud; the body was too heavily built for a self-portrait; the background was stylistically off. When I asked Feaver about the picture recently, almost seventeen years after the viewing, he had no memory of seeing it at all. But after consulting his diary he agreed with his initial assertion, which was recorded by a gallery assistant at the time. “If this spectral me had gone in, he would have said roundly that it wasn’t by Freud,” Feaver said. “There’s nothing like it in Lucian’s work ever, anywhere, to survive. . . . Every single certifiable one is fundamentally quite different from this rather careful, painstaking, correct thing.”

Freud was shown images of the painting several times, by his daughter Esther and by Pilar Ordovas, a former deputy chairman of postwar and contemporary art at Christie’s, who is now a gallerist. Ordovas grew close to Freud in 2srcsrc3, after she brought to market a rare urban scene of his, which he had not seen for thirty years. She became a regular visitor to his studio and handled his relationship with the auction house. “The artist was alive. I was doing my duty of showing him this work, slightly embarrassed,” she told me. “He said, ‘Pilar, absolutely not.’ There was not even a moment’s thought or question.” After Esther showed her father images of the painting, Freud asked for his name to be removed from the frame.

Omar had more luck with independent experts. In the summer of 2srcsrc6, Nicholas Eastaugh, a world authority on pigmentation analysis, travelled to Geneva. Eastaugh examined the painting, which was now being called “Standing Male Nude,” with a microscope, under UV light, and took sixteen tiny paint samples. Eastaugh found “a series of points of similarity and correspondence” between Omar’s painting and known Freud works: traces of charcoal in the paint, the use of hog-hair brushes, which Freud favored starting in the late fifties, and the presence of a loose preparatory drawing, in pencil. On the bottom edge of the canvas, Eastaugh also found a partial fingerprint, which could point to a more definitive connection with the artist.

In life, Freud was a keen guardian of his œuvre and of his privacy. He communicated mostly by phone but did not give out his number, and he changed it often. He was sensitive to the market for his work and hated signing his name. “He was prepared to do whatever was necessary in order to protect what he thought was his right to be able to project to the world what he wanted,” Geordie Greig, a former editor of the Daily Mail and a friend of Freud’s, who wrote a book about him, told me.

Most of Freud’s failed paintings never left the studio. “Lucian was an avid destroyer of works that went wrong,” Feaver wrote me, in an e-mail. “I can remember many awaiting the cull. Generally, these—portraits especially—would be stiff and, more often, disproportionate.” Freud also kept an eye on paintings long after he made them. Throughout his career, he became angry when substandard works found their way to the market or forgotten canvases resurfaced. In the early fifties, the house of Gerald Gardiner, Freud’s lawyer at the time, was broken into and a single picture was taken: a portrait of Carol, Gardiner’s daughter, which Freud had painted but didn’t think much of. The story gave rise to a legend, encouraged by Freud, that he paid criminals to get hold of paintings that displeased him or that he regretted seeing out in the world. Late in his life, one of Freud’s daughters, Rose Boyt, hesitated to send him a painting for authentication, for fear that he would punch a hole in it instead.