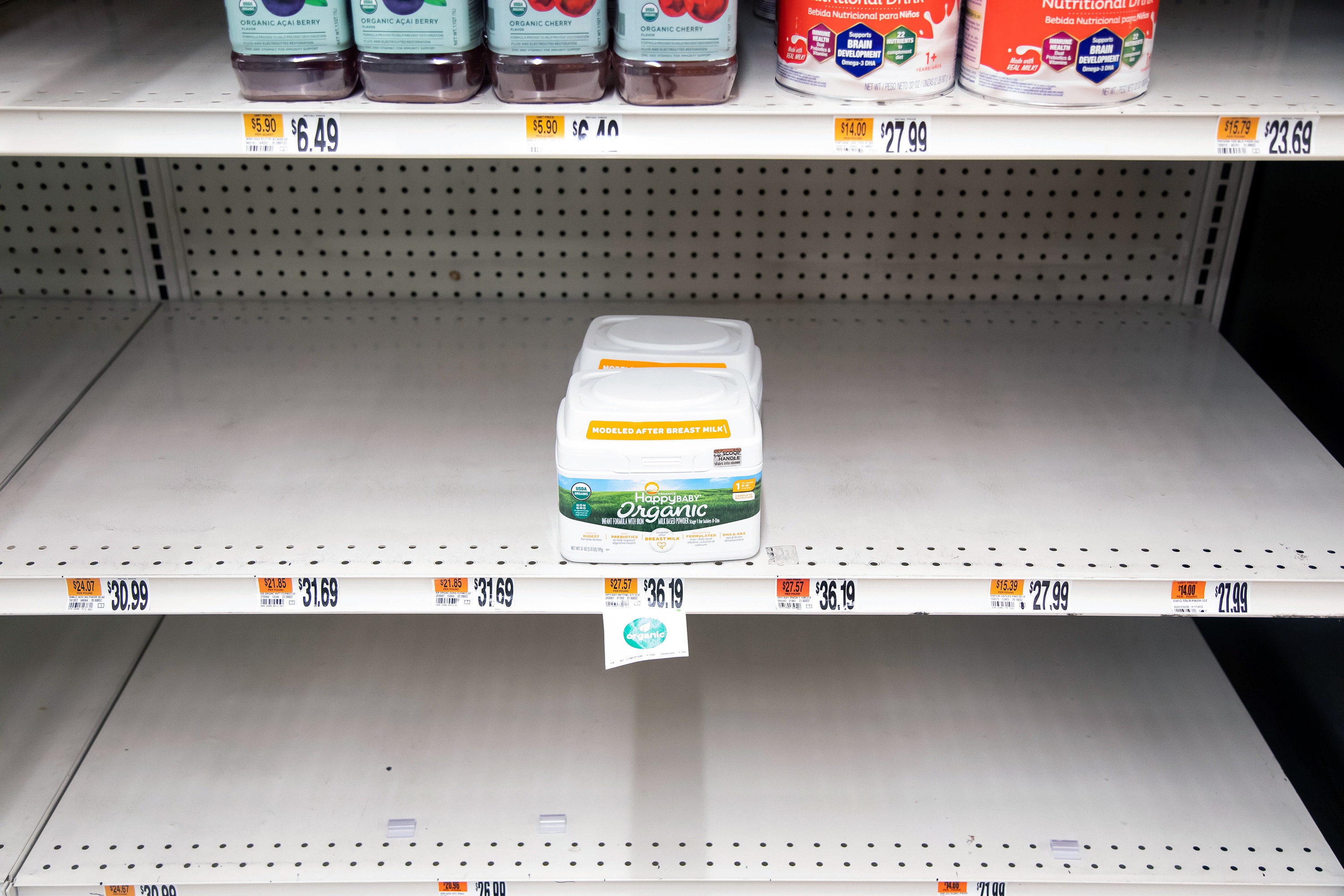 For enthusiasts of C-SPAN and institutional accountability, a small casualty of the pandemic era has been the adversarial drama of a good congressional committee hearing. There is catharsis, even Schadenfreude, to be found in hours-long interrogations of malfeasant government officials or corporate executives embroiled in scandal, but the glitchy, COVID-safe versions of such events transform the oak-panelled reckonings beneath vaulted ceilings into just another Zoom meeting. This disconnect was evident on Wednesday, when the House Committee on Energy and Commerce convened a hearing on the communication breakdowns, lack of foresight, and gross negligence that contributed to the ongoing baby-formula shortage across the United States. The frantic parents and hungry babies afflicted by the crisis—which has dragged on for months, and which will continue for weeks, at least—are the rare constituency that can inspire bipartisan outrage in Congress. But it’s hard to project righteous indignation from your living room or, in the case of one committee member, what looked like the front seat of a car.

The time line of the catastrophe beggars belief. Abbott Nutrition, a subdivision of the multinational health conglomerate Abbott Laboratories, controlled at least forty per cent of the baby-formula market in the U.S., and it makes about forty per cent of that formula at a single facility in Sturgis, Michigan. On September 20, 2021, the Food and Drug Administration was made aware of a baby who had contracted a bacterial infection, caused by Cronobacter sakazakii, after consuming formula made at the Sturgis plant. Coincidentally, that same day, as Politico’s Helena Bottemiller Evich later reported, F.D.A. inspectors were conducting a routine check of the facility. They registered no major safety issues, although they did recommend “voluntary action” to address cleanliness and sanitation. Then, in October, a former employee at the Sturgis plant sent a shocking whistle-blower report to senior officials at the F.D.A. It alleged that Abbott had falsified records, shipped untested and potentially contaminated formula, permitted lax cleaning practices, and concealed information from F.D.A. inspectors. (Abbott, which is investigating the report, said that the whistle-blower was a former employee who, after being “dismissed due to serious violations of Abbott’s food safety policies,” made “evolving, new and escalating allegations to multiple authorities.”) The whistle-blower report was in the F.D.A.’s possession for months before reaching top officials. A new F.D.A. inspection of the Sturgis plant did not commence until January 31, 2022.

Finally, on February 17th, Abbott shut down the Sturgis plant and issued a voluntary recall of certain lots of three of its formula brands, after four babies who consumed Abbott products got bacterial infections in Minnesota, Ohio, and Texas. Two of the babies later died. Abbott denied that its products were to blame; strangely, part of the company’s defense has been that each baby consumed a different formula product from the Sturgis plant, and that they were sickened at different times. The F.D.A.’s January inspection uncovered five strains of Cronobacter there.

That single facility, which remains closed, accounted for about twenty per cent of the entire domestic supply of baby formula, including Similac (which, in the baby-formula wars, is the Coke to Enfamil’s Pepsi) and EleCare, a specialized formula for children with food allergies and digestive ailments. The immediate effects of the shutdown, and its near-immediate knock-on effects on the rest of the formula market, were obvious. Pandemic-era supply-chain problems had already left many store shelves empty of formula by the beginning of 2022, as the Wall Street Journal reported a month before the Sturgis plant went down. Abbott is the major formula supplier to the Special Supplemental Nutrition Program for Women, Infants, and Children (WIC), whose recipients constitute more than half of the domestic formula market; according to Truthout, “Abbott Nutrition is the sole provider of infant formula for U.S. government aid programs in 34 states, seven Indian tribal organizations, four territories and Washington, D.C.” By early spring, accounts proliferated of parents driving around for hours to find formula, rationing supplies, or even substituting water or homemade formula. Pediatricians reported seeing more patients with weight loss. Listings on eBay reportedly offered cases of formula for hundreds of dollars apiece. Robert Ford, the chairman and chief executive of Abbott, later acknowledged that some children who rely on EleCare were hospitalized.

Somehow, widespread stories of desperate parents unable to feed their infants did not inspire immediate federal action. On May 18th, three months after the Sturgis plant closure, President Biden invoked the Defense Production Act to compel suppliers of formula ingredients to prioritize deliveries to formula manufacturers and authorized Pentagon-contracted commercial aircraft to fly in formula from overseas. The same day, the House passed a supplemental appropriations bill giving the F.D.A. twenty-eight million dollars in emergency funds to address the shortage. (A hundred and ninety-two Republicans voted against the bill, including Morgan Griffith, of Virginia, a member of the Energy and Commerce committee who asked during Wednesday’s hearing why the F.D.A. and Abbott were not “working at breakneck speed” to address the crisis.) Asked at a press conference whether the Administration could have taken steps sooner, Biden replied, “If we’d been better mind readers, I guess we could have, but we moved as quickly as the problem became apparent to us.” (Abbott has a consent decree with the F.D.A. for a reopening of the Sturgis plant, tentatively slated for June 4th; from that point, it would take another four to eight weeks for formula produced there to hit store shelves.)

As several committee members pointed out on Wednesday, the meltdown at Sturgis is likely microcosmic of systemic, ongoing issues at Abbott, which, in 2010, recalled millions of units of Similac produced at the Sturgis plant after beetles and their larvae were found in the product. Stunningly, Christopher Calamari, a senior vice-president at Abbott, claimed at the hearing that he did not know of the whistle-blower’s October report until late April, when Representative Rosa DeLauro, a Democrat from Connecticut, shared it with the public. Kathleen Rice, a Democratic congresswoman from New York State, elicited the most memorable response when she repeatedly pressed Calamari on why the company had to rely on a whistle-blower to reveal safety shortcomings at a Michigan facility. “Representative,” Calamari replied, “this, um, the nature of this, um, process is, um, this, um, when it was made public, it was, um, was shared with F.D.A., and I was not, um, directly aware of the investigation until that time.”

The report is ghastly reading. The plant, the whistle-blower wrote, periodically failed to properly seal cans of formula, and, as a work-around, performed safety tests on empty cans instead. He alleged that he was expected to fudge quality-evaluation procedures and that some equipment at the Sturgis plant had been in disrepair for years, which “caused product flowing through the pipes to pick up the bacteria that was trapped in the defective areas of the pipe.” The whistle-blower also detailed a patchy record-keeping system, maintained largely on paper; a member of management allegedly suggested to him “that electronic records would make the Sturgis site more accountable to others at the division and corporate level.” The report also pointed to shortcomings in the F.D.A.’s inspection process. In 2019, the Sturgis plant produced a batch of formula that tested positive for microorganisms; in response, the report claims that Abbott destroyed only the part of the batch that it deemed contaminated, and released the rest to market. That same year, the plant passed an F.D.A. safety audit. A member of management, the whistle-blower claims, “volunteered that she was amazed that the F.D.A. was unable to discover what occurred with the micro batches.”

Abbott and the F.D.A. are curious counterparts in this debacle: one an unfathomably profitable multinational corporation; the other a short-staffed, perpetually embattled agency that nonetheless has at least the nominal heft of the federal government behind it. According to a Securities and Exchange Commission filing, in October, 2019, Abbott’s board of directors authorized stock buybacks of up to three billion dollars; in December, 2021, Abbott approved another buyback of up to five billion. One wonders what that money could’ve done for the pockmarked pipes at Sturgis. Meanwhile, the F.D.A., as Bottemiller Evich recently reported, has “repeatedly failed to take timely action on a wide range of safety and health issues . . . including dangerous pathogens found in water used to grow produce and heavy metal contamination in baby foods,” as well as “numerous other chemicals of concern, including PFAS, so-called forever chemicals, which can be found in the food supply and are used in food packaging.” Last year, a House subcommittee published an alarming report, highly critical of the F.D.A., with a to-the-point title: “Baby Foods Are Tainted with Dangerous Levels of Arsenic, Lead, Cadmium, and Mercury.”