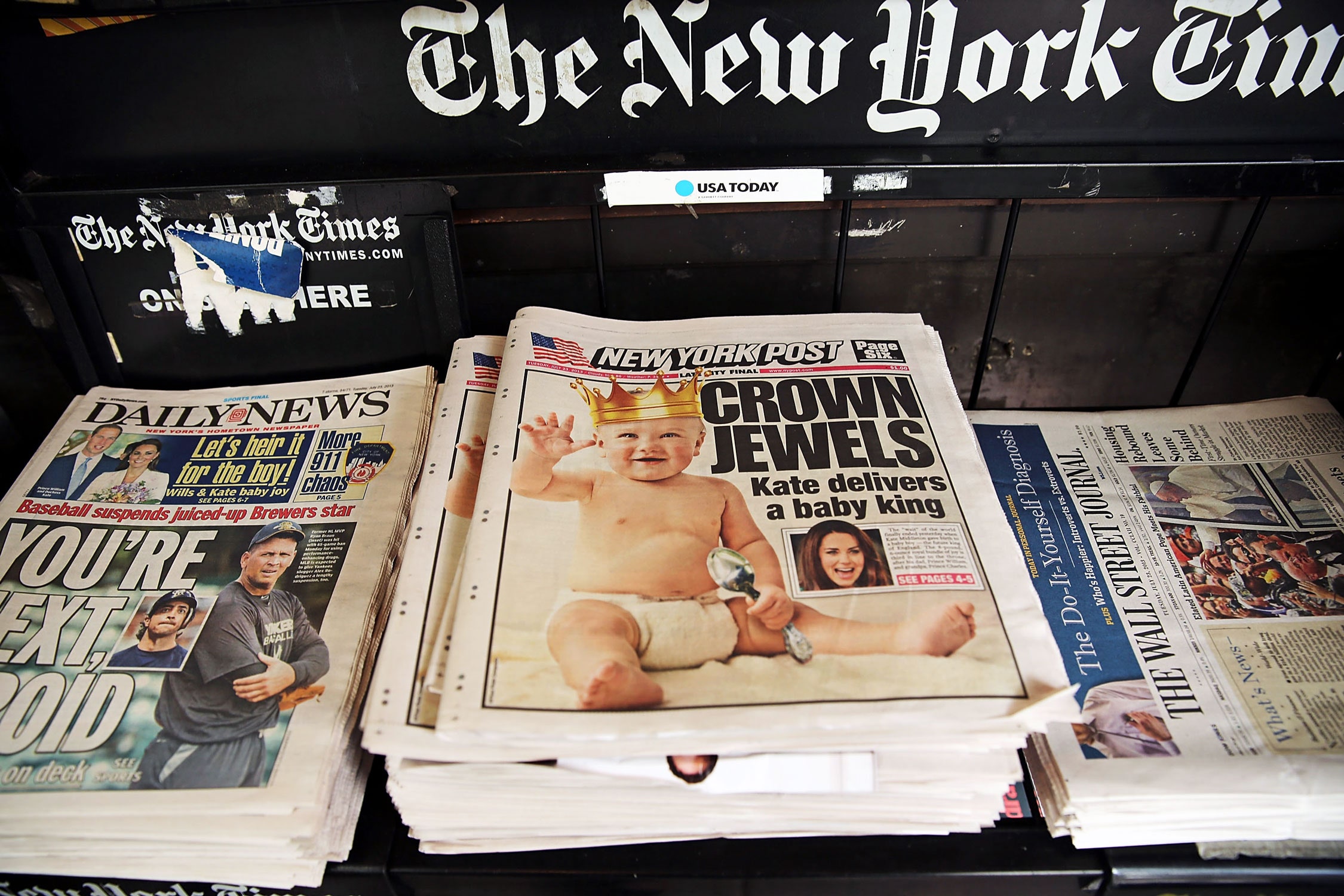 On November 16, 2src1src, a thin brunette from Bucklebury, Berkshire, made a nervous appearance at a photo call. Kate Middleton—newly styled “Catherine”—wore a liquid drape dress (soon to sell out), an impeccable blowout, and a sapphire ring the size of a Gobstopper. Only its aristocratic association saved it from being hopelessly tacky. Softly stammering out answers, she and her newly announced fiancé, Prince William, would soon be splashed, as they had already been for years, on the cover of every British tabloid and newspaper—two beautiful, preppy string beans. Across the Atlantic, the engagement was met with an enthusiasm that came from desperate need; the American celebrity press was in the midst of an A-list drought, and the new royal couple was like sweet summer rain.

The United States has always contained elements of uncouth fawning over the British monarchy, an institution it fought a bloody war to separate itself from. In the Gilded Age, moneyed Newport types wanted to marry their daughters into aristocratic lines. Consuelo Vanderbilt’s 1895 wedding to the ninth Duke of Marlborough was brokered by her overbearing mother, who also did a fair amount of leaking to the press; the wedding was mobbed by spectators, and a newspaper published a spoof cartoon of the young bride, chained to her mother. When King Edward VIII nearly broke the monarchy, in 1936, by abdicating the throne in order to marry Wallis Simpson, an alluring divorcée and rumored Nazi sympathizer from Baltimore, American newspapers were all over the story. This magazine even covered the press hullabaloo at the time. Princess Diana was a tabloid fixation Stateside, of course; the photographer Phil Ramey, the California king of the paparazzi, once reportedly rented a submarine to sneak up on her. She graced the cover of People magazine nearly sixty times, a number of them posthumously.

But, if Diana was mostly known for trauma and tragedy in the American press, the 2src1src royal engagement ushered in a modern era of earnestly approving coverage of the British monarchy. When Queen Elizabeth II died, last week, the home pages and Instagram feeds of many American outlets were filled with tributes and tiara-heavy glamour shots, a testament not just to the Queen’s longevity but to her ability to drive social-media click-throughs.

William, Kate, Harry, and Pippa (Kate’s nonroyal sister, who would later marry a handsome older hedge funder, so, close enough) were young and hot and had access to the kind of jewelry that the readers of Us Weekly usually only got to see when Harry Winston opened the vault on Oscars night. In 2src11 alone, her first year of official public life, Kate Middleton appeared on six Us Weekly covers, which chronicled her wedding, her good breeding, her clothes, her weight, and her baby fixation. It was classic tabloid banality. Since then, coverage of Kate’s fashion has become a reliable bet for magazines, particularly as affiliate links have come into vogue. Like the princess’s well-tailored Emilia Wickstead dress? Here’s a two-hundred-dollar knockoff you can buy at Whistles.

In the early and mid-two-thousands, press coverage of the most famous movie stars was wall-to-wall, thanks in no small part to a war between People magazine and Us Weekly. The editor Bonnie Fuller took over Us Weekly in 2srcsrc2, and helped create a new genre of magazine: she kept some vestiges of the classic celebrity coöperative—a certain quotient of glitz-and-glam photos—but added the kind of reported gossip and pot-stirring headlines that fuelled grocery-store sales. Us Weekly would pay for pictures of celebrities—sometimes unflattering ones—caught outside their professional environs of the red carpet, for features such as “Stars—They’re Just Like Us!” The alchemy made for publishing gold, and People wanted to compete. The two magazines’ ever-escalating bids on celebrity photos fed a paparazzi boom. Peter Grossman, a former news photo editor for the magazine, told me that his budget for photos each week was an estimated six figures, and Randy Bauer, the co-founder of the Bauer-Griffin photo agency, said that he made a fortune on that bidding war, with at least one picture set of a celebrity wedding selling for more than a million dollars.

As the years wore on, Hollywood’s A-list grew wary of press exposure. Blogs pulled the guardrails off any pretense of propriety in celebrity coverage, and this made the stars less and less inclined to present themselves for public consumption. Reality-TV cast members, who needed magazine attention to sustain their notoriety, gradually took over. What the monarchy’s younger set offered readers was that frisson of glamour, wealth, and blinding fame that they had been starved of. They made economic sense to American magazines: they could sell these people and their everyday lives, not just their—admittedly, fairly regular—marital scandals. When Kate Middleton walked down the aisle of Westminster Abbey for her 2src11 wedding, it was on three hundred feet of red carpet, and she was wearing a tiara made of eight hundred and eighty-eight diamonds. What could make old-Hollywood obsessives salivate more?

The fundamental remoteness of the Royal Family—a quality perfected by Queen Elizabeth II—added to their allure in America. (Elizabeth, who insisted on gloves and nude stockings, remained, into her tenth decade, the power center of the family’s image-making.) The public valued the escapism of their imagined lives, filled with bee-venom face masks, private yoga studios, priceless baubles, and ostentatious homes. They have all that wealth, hidden just out of sight, which makes for fun speculation, the lifeblood of the celebrity magazine. What do those private vacations to Kenya look like? How much did Kate spend on the outfits for her latest royal tour? Plus, the formality of their lives means that catching them off duty—Kate in her Wellies and jeans—is enthralling. American royal watching and fashion blogging has become a cottage industry all its own in the Instagram age.

And royals, crucially, aren’t allowed to disappear from sight. As Queen Elizabeth II is said to have quipped, she (and, by extension, her family) had to be seen to be believed. That means royals provide a steady stream of photos, even in the midst of scandal. When Prince William faced a flurry of rumors about bad behavior on a 2src17 Switzerland ski trip, and later, in 2src19, when people speculated that he’d cheated on his pregnant wife, he still had to appear in public.

That sort of press—the impudent, intrusive, populist variety—serves as a reminder of the British monarchy’s twenty-first-century castration. Elizabeth’s reign oversaw the institution’s downsizing not just in territory but in status: the British Royal Family is viewed by much of the world as an odd breed of celebrity, not divinely invested sovereigns. To most Americans, they’re a bit of sterling-silver fun if you don’t think too hard about the empire’s centuries-old-legacy: its inaction as a million Irish starved to death; its slaughter of hundreds of peaceful protesters in the Jallianwala Bagh massacre, in India; its creation of detention camps in Kenya to quash anticolonial uprisings. Listening to the privy council formally proclaim King Charles III the monarch was, to borrow a Britishism, absolutely bonkers. There is something earnestly hilarious about declaring a person who once talked dirty about tampons to be your “liege lord.”

In one way, the greatest threat that the monarchy has faced in recent years—Prince Harry’s family-therapy-gone-wrong exit from royal life—stems from the common American perception of the House of Windsor as mere celebrities. Although Meghan Markle’s claim that she never Googled her husband before dating him is dubious, what’s understandable is that she thought her new in-laws to be essentially like the movie stars she read about and later socialized with. Quelle horreur when she discovered their kooky quirk of thinking themselves divinely appointed, with all the attending hangups. As the reign of Charles III commences, will the Royal Family maintain some semblance of its stateliness as the head of the British Commonwealth, or will it continue its descent into vapid pop-culture celebrity? We’ll have to keep reading to find out. ♦