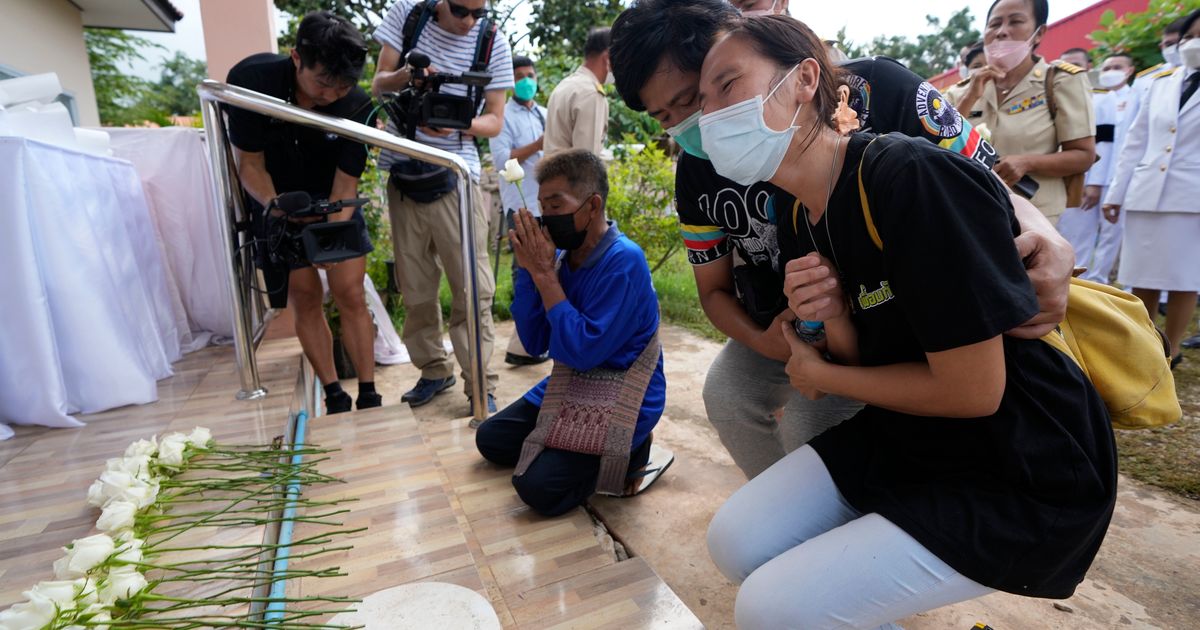 The entire country reeled in the wake of Thursday’s grisly knife and gun attack in a small town nestled among rice paddies in one of the nation’s poorest regions. At least 24 of the 36 people killed in the assault, Thailand’s deadliest mass killing, were children.

“I cried until I had no more tears coming out of my eyes. They are running through my heart,” said Seksan Sriraj, 28, who lost his pregnant wife due to give birth this month in the attack at the Young Children’s Development Center in Uthai Sawan.

A stream of people, including Prime Minster Prayuth Chan-ocha, other government representatives and relatives themselves, have left flowers at the day care center. By afternoon, bouquets of white roses and carnations lined the wall outside, along with five tiny juice boxes, bags of corn chips and a stuffed animal. A faded Thai flag flew at half-staff above.

King Maha Vajiralongkorn and Queen Suthida were expected later in the day to go to hospitals, where seven of the 10 people wounded remain. A vigil was planned in a central park in Bangkok , the nation’s capital.

Police identified the attacker as Panya Kamrap, 34, a former police sergeant fired earlier this year because of a drug charge involving methamphetamine. He had been due to appear in court Friday. An employee told a Thai TV station that Panya’s son had attended the day care but hadn’t been there for about a month.

When asked whether he thought the center was secure enough, Seksan noted the attacker had been a police officer. “He came to do what he had in his mind and was determined to do it. I think everyone did the best they could.”

Witnesses said the attacker shot a man and child in front of the center before walking toward it. Teachers locked the glass front door, but the gunman shot and kicked his way through it. The children, mainly preschoolers, had been taking an afternoon nap, and photos taken by first responders showed their tiny bodies still lying on blankets. In some images, slashes to the victims’ faces and gunshots to their heads could be seen.

Panya took his own life after killing his wife and child at home.

The attack took place in Nongbua Lamphu province, one of the country’s poorest regions.

In an interview with Amarin TV, Satita Boonsom, who worked at the day care center, said staff locked the door to the building after seeing the assailant shoot a child and his father out front. But the attacker broke the glass door and went on to attack the children and workers with his knife and firearm.

Satita said she and three other teachers climbed the nursery’s fence to escape and call police and seek help. By the time she returned, the children were dead. She said one child who was covered by a blanket survived the attack, apparently because the assailant assumed he was dead.

She said the center usually has around 70 to 80 children, but there were fewer at the time of the attack because the semester had ended for older children and rain prevented a school bus from operating.

“They wouldn’t have survived,” she said.

Satita added that the attacker’s son hadn’t been to the day care center recently because he was sick.

One of the youngest survivors is a 3-year-old boy who was riding a tricycle close to his mother and grandmother when the assailant began slashing them with the knife. The mother died from her wounds, and the boy and grandmother were being treated at hospitals, according to local media.

Mass shootings are rare but not unheard of in Thailand, which has one of the highest civilian gun ownership rates in Asia, with 15.1 weapons per 100 people compared to only 0.3 in Singapore and 0.25 in Japan. That’s still far lower than the U.S. rate of 120.5 per 100 people, according to a 2017 survey by Australia’s GunPolicy.org nonprofit organization.

Support and condolences poured in from around the world. “All Australians send their love and condolences,” Australian Prime Minister Anthony Albanese tweeted. U.S. Secretary of State Antony Blinken called the violence “senseless and heartbreaking.”

Pope Francis offered prayers for all those affected by such “unspeakable violence.”

Thailand’s previous worst mass killing involved a disgruntled soldier who opened fire in and around a mall in the northeastern city of Nakhon Ratchasima in 2020, killing 29 people and holding off security forces for some 16 hours before eventually being killed by them.

Nearly 60 others were wounded in that attack. Its death toll surpassed that of the previously worst attack on civilians, a 2015 bombing at a shrine in Bangkok that killed 20 people. It was allegedly carried out by human traffickers in retaliation for a crackdown on their network.

Last month, a clerk shot co-workers at Thailand’s Army War College in Bangkok, killing two and wounding another before he was arrested.