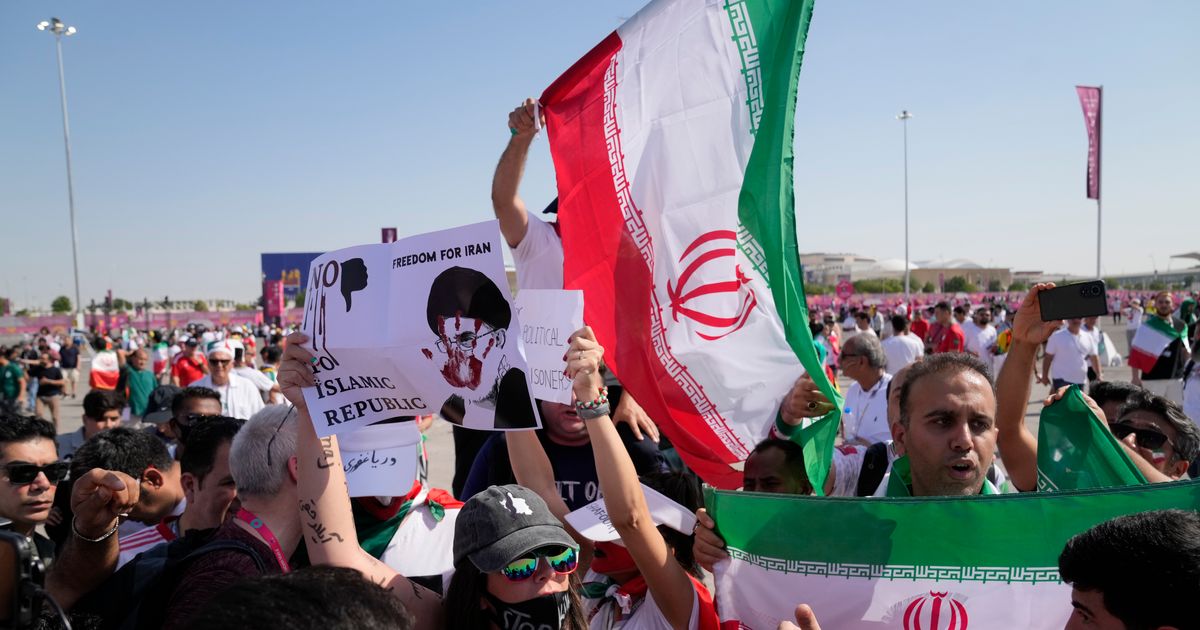 AL RAYYAN, Qatar (AP) — Tensions ran high at Iran’s second match at the World Cup on Friday as fans supporting the Iranian government harassed those protesting against it and stadium security seized flags, T-shirts and other items expressing support for the protest movement that has gripped the Islamic Republic.

Some fans were stopped by security guards from bringing in Persian pre-revolutionary flags to the match against Wales at the Ahmad Bin Ali Stadium.

Others carrying such flags had them ripped from their hands by pro-government Iran fans, who also shouted insults at fans wearing T-shirts with the slogan of the protest movement gripping the country, “Woman, Life, Freedom.”

Unlike in their first match against England, the Iran players sang along to their national anthem before the match as some fans in the stadium wept, whistled and booed.

The national team has come under close scrutiny for any statements or gestures about the nationwide protests that have wracked Iran for weeks.

Shouting matches erupted in lines outside the stadium between fans screaming “Women, Life, Freedom” and others shouting back “The Islamic Republic!”

Mobs of men surrounded three different women giving interviews about the protests to foreign media outside the stadium, disrupting broadcasts as they angrily chanted, “The Islamic Republic of Iran!” Many female fans appeared shaken as Iranian government supporters shouted at them in Farsi and filmed them up close on their phones.

After Iran’s 2-src triumph, crowds of Iranian fans wildly waving national flags streamed out of the stadium. They thronged a group of protesters who held up photos of Mahsa Amini, the 22-year-old whose Sept. 16 death in the custody of the morality police first unleashed the protests, yelling “Victory!” to drown out chants of Amini’s name.

One 35-year-old woman named Maryam, who like other Iran fans declined to give her last name for fear of government reprisals, started to cry as shouting men blowing horns encircled her and filmed her face. She had the words “Woman Life Freedom” painted on her face.

“I’m not here to fight with anyone, but people have been attacking me and calling me a terrorist,” said Maryam, who lives in London but is originally from Tehran. “All I’m here to say is that football doesn’t matter if people are getting killed in the streets.”

Maryam and her friends had worn hats emblazoned with the name of an outspoken Iranian former soccer player Voria Ghafouri, who had criticized Iranian authorities and was arrested in Iran on Thursday on accusations of spreading propaganda against the government. She said Iranian government supporters had taken the hats from their heads.

Ghafouri, who is Kurdish, was a star member of Iran’s 2src18 World Cup team, but was surprisingly not named in the squad for this year in Qatar.

“It’s obvious that the match had become very politicized this week. You can see people from the same country who hate each other,” said Mustafa, a 4src-year-old Iran fan who also declined to give his last name. “I think the arrest of Voria has also affected society in Iran a lot.”

Furious protesters in Iran have been venting their anger over social and political repression and the state-mandated headscarf, or hijab, for women. The demonstrations have quickly grown into calls for the downfall of the Islamic Republic itself. At least 419 people have been killed since the protests erupted, according to monitoring group Human Rights Activists in Iran.

The turmoil has overshadowed the start of Iran’s World Cup campaign, including the opening match against England on Monday. Iran’s players remained silent as their national anthem played before the game and didn’t celebrate their two goals in the 6-2 defeat. On Friday, they sang along to the anthem and celebrated wildly when they scored twice against Wales.

Ayeh Shams, an Iranian from the United States, said security guards confiscated her flag because it had the word “women” written on it.

“We’re just here to enjoy the games and give a platform for the Iranian people who are fighting against the Islamic regime,” Shams said.

Zeinlabda Arwa, a security guard at the stadium, confirmed that authorities had been given orders to confiscate anything but the flag of the Islamic Republic of Iran.

“Whether you’re talking about Iran or Qatar or any country, you are only allowed to bring in the normal flag,” she said.

An angry group of Iranian government supporters shouted at Elyas Doerr, a 16-year-old Iranian boy living in Arizona who was wearing the Persian flag as a cape, until he took it off and and put it in his bag.

“They’re not liking that it’s a political statement,” he said, adding that other Iranian fans had approached him to say they appreciated the gesture.

A 32-year-old Iranian woman living in southern Spain, who declined to give her name for fear of reprisals, scrambled after the match to retrieve her hat and flag that had been confiscated by stadium security. She said Qatari police ordered her to scrub off the names of Iranian protesters killed and arrested by security forces that she had written on her arms and chest, at the behest of Iranian government supporters. At the game, just traces of ink remained on her skin that was rubbed raw.

“Today’s football experience was the most intimidating I’ve ever been in, before and after the match,” she said. She described dozens of men who surrounded her and tried to smother her face with their Iranian flags, snatching her signs as Qatari security stood by.

“I don’t care about the win, to be honest. That’s not my priority.”

After the game, Iranian state television broadcast patriotic songs and showed footage of people bursting out into cheers across the country. Even as many Iranians celebrated the victory, protests continued across the country. Videos circulating on social media appeared to show protests and gunfire in the eastern city of Zahedan. The Associated Press was unable to confirm reports that protesters had been wounded there.