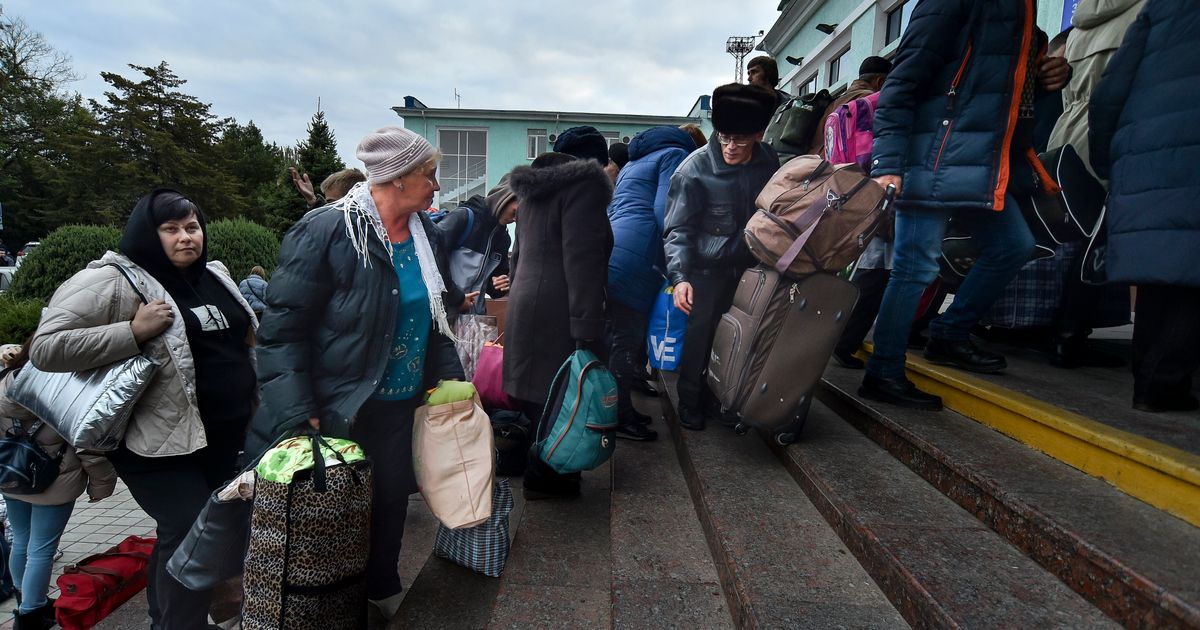 KYIV, Ukraine (AP) — Russian-installed authorities in Ukraine told all residents of the city of Kherson to leave “immediately” Saturday ahead of an expected advance by Ukrainian troops waging a counteroffensive to recapture one of the first urban areas Russia took after invading the country.

In a post on the Telegram messaging service, the pro-Kremlin regional administration strongly urged civilians to use boat crossings over a major river to move deeper into Russian-held territory, citing a tense situation on the front and the threat of shelling and alleged plans for “terror attacks” by Kyiv.

Kherson has been in Russian hands since the early days of the nearly 8-month-long war in Ukraine. The city is the capital of a region of the same name, one of four that Russian President Vladimir Putin illegally annexed last month and put under Russian martial law on Thursday.

On Friday, Ukrainian forces bombarded Russian positions across the province, targeting pro-Kremlin forces’ resupply routes across the Dnieper River and preparing for a final push to reclaim the city.

The Ukrainian military has reclaimed broad areas in the north of the region since launching a counteroffensive in late August. It reported new successes Saturday, saying that Russian troops were forced to retreat from the villages of Charivne and Chkalove in the Beryslav district.

Russian-installed officials were reported as trying desperately to turn Kherson city — a prime objective for both sides because of its key industries and ports — into a fortress while attempting to relocate tens of thousands of residents.

The Kremlin poured as many as 2,srcsrcsrc draftees into the surrounding region to replenish losses and strengthen front-line units, according to the Ukrainian army’s general staff.

The wide Dnieper River figures as a major factor in the fighting, making it hard for Russia to supply its troops defending the city of Kherson and nearby areas on the west bank after relentless Ukrainian strikes rendered the main crossings unusable.

Taking control of Kherson has allowed Russia to resume fresh water supplies from the Dnieper to Crimea, which were cut by Ukraine after Moscow’s annexation of the Black Sea peninsula. A big hydroelectric power plant upstream from Kherson city is a key source of energy for the southern region. Ukraine and Russia accused each other of trying to blow it up to flood the mostly flat region.

Kherson’s Kremlin-backed authorities previously announced plans to evacuate all Russia-appointed officials and as many as 6src,srcsrcsrc civilians across the river, in what local leader Vladimir Saldo said would be an “organized, gradual displacement.”

Another Russia-installed official estimated Saturday that around 25,srcsrcsrc people from across the region had made their way over the Dnieper. In a Telegram post, Kirill Stremousov claimed that civilians were relocating willingly.

“People are actively moving because today the priority is life. We do not drag anyone anywhere,” he said, adding that some residents could be waiting for the Ukrainian army to reclaim the city.

Ukrainian and Western officials have expressed concern about potential forced transfers of residents to Russia or Russian-occupied territory.

Ukrainian officials urged Kherson residents to resist attempts to relocate them, with one local official alleging that Moscow wanted to take civilians hostage and use them as human shields.

Elsewhere in the invaded country, hundreds of thousands of people in central and western Ukraine woke up on Saturday to power outages and periodic bursts of gunfire. In its latest war tactic, Russia has intensified strikes on power stations, water supply systems and other key infrastructure across the country.

Ukraine’s air force said in a statement Saturday that Russia had launched “a massive missile attack” targeting “critical infrastructure,” adding that it had downed 18 out of 33 cruise missiles launched from the air and sea.

Ukrainian President Volodymyr Zelenskyy later said that Russian launched 36 missiles, most of which were shot down.

“Those treacherous blows on critically important facilities are characteristic tactics of terrorists,” Zelenskyy said. “The world can and must stop this terror.”

The president’s office said in its morning update that five suicide drones were downed in the central Cherkasy region southeast of Kyiv. Similar reports came from the governors of six western and central provinces, as well as of the southern Odesa region on the Black Sea.

Kyrylo Tymoshenko, the deputy head of Ukraine’s presidential office, said on Telegram that almost 1.4 million households lost power as a result of the strikes. He said some 672,srcsrcsrc homes in the western Khmelnytskyi region were affected and another 242,srcsrcsrc suffered outages in the Cherkasy region.

Most of the western city of Khmelnytskyi, which straddles the Bug River and had a pre-war population of 275,srcsrcsrc, was left with no electricity, shortly after local media reported several loud explosions.

In a social media post on Saturday, the city council urged local residents to store water “in case it’s also gone within an hour.”

The mayor of Lutsk, a city of 215,srcsrcsrc in far western Ukraine, made a similar appeal, saying that power in the city was partially knocked out after Russian missiles slammed into local energy facilities and damaged one power plant beyond repair.

The central city of Uman, a key pilgrimage center for Hasidic Jews with about 1srcsrc,srcsrcsrc residents before the war, also was plunged into darkness after a rocket hit a nearby power plant.

Ukraine’s state energy company, Ukrenergo, responded to the strikes by announcing that rolling blackouts would be imposed in Kyiv and 1src Ukrainian regions to stabilize the situation.

In a Facebook post on Saturday, the company accused Russia of attacking “energy facilities within the principal networks of the western regions of Ukraine.” It claimed the scale of destruction was comparable to the fallout earlier this month from Moscow’s first coordinated attack on the Ukrainian energy grid.

Both Ukrenergo and officials in Kyiv have urged Ukrainians to conserve energy. Earlier this week, Zelenskyy called on consumers to curb their power use between 7 a.m. and 11 a.m. and to avoid using energy-guzzling appliances such as electric heaters.

Zelenskyy said earlier in the week that 3src% of Ukraine’s power stations have been destroyed since Russia launched the first wave of targeted infrastructure strikes on Oct. 1src.

In a separate development, Russian officials said two people were killed and 12 others were wounded by Ukrainian shelling of the town of Shebekino in the Belgorod region near the border.