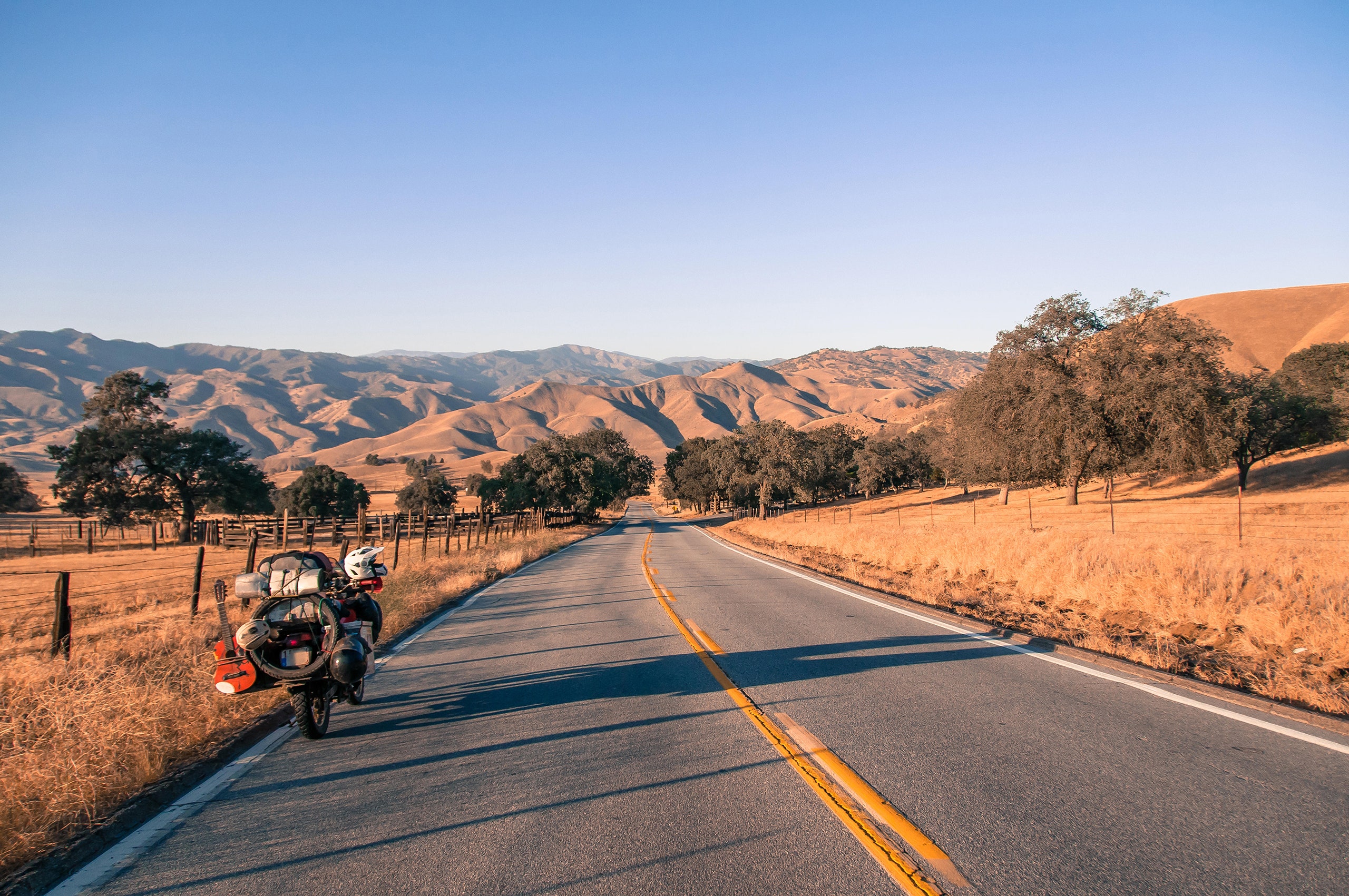 Every writer I know has memories they return to in their work over and over again. There is rarely much logic to the choices, nor do such memories tend to align with the sorts of significant events that traditionally make up the time line of one’s life. My point of fixation, one that’s appeared a few times in my writing, occurred during a solo cross-country road trip I took at the age of nineteen. I was driving to Seattle, where I knew nobody, and was planning to stop for the night in Billings, Montana. It was already late, and I had been keeping myself awake with a non-stop chain of cigarettes and vending-machine coffee I’d dutifully bought at every rest stop along the way. I had a pile of books on tape on the passenger’s seat. About an hour outside of Billings, I put in “Zen and the Art of Motorcycle Maintenance,” which, coincidentally, starts out on a road trip to Montana. The first line—“I can see by my watch, without taking my hand from the left grip of the cycle, that it is eight-thirty in the morning”—had a hypnotic effect on me. I blew through Billings that night, and for the next six hours I listened to Robert M. Pirsig’s barely fictional meditation on fatherhood, Chautauquas, Zen, tools, and the idea that quality—the main conceptual preoccupation of Pirsig’s life—lay in the repetition of right actions.

I am not particularly self-aware, nor do I have much memory for the person I was at the time. So I can’t really explain to you why “Zen and the Art of Motorcycle Maintenance” had such a hold on me. Even back then, I knew that the book was considered a bit gauche—a manual for the type of seekers who plumb out all the parts of Eastern religions that justify their own selfish behavior, who spend their days walking the earth in a fog of patchouli oil and immense self-regard. But I was also captivated by the idea that dharma demanded a sense of conscientious and careful action, whether maintaining a 1966 Honda Super Hawk, shooting free throws, or writing. I was, and I suppose still am, deeply suspicious of the life of the mind, and wanted to believe that enlightenment existed elsewhere.

Over time, I distilled my particular reading of Pirsig down to a line from “I am I be,” a song by De La Soul in which Posdnuos raps, “If I was a rug cleaner / Bet you Pos’d have the cleanest rugs.” The point, as far as I could tell at that young age, wasn’t the competition for the cleanest rugs but, rather, that the dedication to expertly cleaning a rug would yield moments in which the body would fall away from the mind, and you could touch the outer edges of enlightenment.

“On Quality,” a collection of Pirsig’s speeches, fiction, letters, and musings that was posthumously published last month, might not satisfy the reader seeking a nostalgic return to the road or the mechanic’s shop. The text, instead, reads like a notebook from a life spent pondering: What does “quality” mean? Why are some things better than others? What is it about humans that causes us to recognize the difference? His answer is that quality “is a characteristic of thought and statement that is recognized by a non-thinking or intuitive process.” He continues, “Because definitions are a product of rigid reasoning, quality can never be rigidly defined. But everyone knows what it is.”

As in “Zen and the Art of Motorcycle Maintenance,” Pirsig mostly defines “quality” by what it is not. That book starts with a dichotomy: on one side is the narrator, who maintains his own motorcycle and understands its every function; on the other is his riding partner John, who owns a high-priced BMW and can’t even be bothered to learn how to fix it. The narrator doesn’t understand John’s relationship to his machine and realizes that, whereas the narrator can see the Buddha in the gears of an engine, John believes that technology or man-made things are anathema to the spiritual reasons why he rides his bike. Who, then, is correct—the logician or the romantic? Who is closer to quality? The answer, according to Pirsig, is neither, but also everything:

There’s a very good chance that unless you spent a decent portion of your life thinking about dharma, reading the Upanishads, or discussing the works of Shunryu Suzuki, there will be very little in “On Quality” that will be of interest to you. The collection almost reads like a scientific proof that tries to identify the exact location of quality while also arguing, somewhat more convincingly, that such a task is impossible. What the reader is left with, then, are a series of word puzzles and contradictions that can be frustrating, but which reveal a lifelong search for what moves Pirsig in a way he cannot explain. In the book’s preface, Wendy Pirsig tells the story of what happened when her late husband joined the army and was stationed in Korea:

Stepping off the train in South Korea when the troops first arrived,
he saw a dusting of snow over the nearby mountains that was so
beautiful and strange and reflected such a different culture that he
became almost ecstatic. “I walked around. It was like Shangri La,” he
recalled years later. “I think I was crying. I just stared at the
roofs wondering what kind of culture could have built roofs like
that,” he said.

In the lineage of Eastern philosophy in American letters—see the works of Pirsig, J. D. Salinger, Kenneth Rexroth, Gary Snyder, or Jack Kerouac—you’ll often find a desire to negate the innate hunger of life. The authors try to find something better in the image of, say, a red wheelbarrow glazed with rain water next to white chickens. This country, they say, is dull and greedy and always misses the point. The possibility of a new type of ecstatic vision and a life filled with meaningful tasks, I imagine, is what drew me and so many other readers to “Zen and the Art of Motorcycle Maintenance.” We believed Pirsig could see the Buddha in a well-maintained carburetor. We wanted to see it, too, and we wanted to work as he did, perhaps in large part because we saw very little future for ourselves in the striving world.

But, as I read all this back today, I was mostly struck by a central contradiction that appears not only in Pirsig’s writing but also in the work of so many of his fellow literary Zen seekers. On the one hand, Pirsig believes that the universality of quality means that everyone can access it. But he also seems to have very little faith that the people around him—whether John, his motorcycling buddy, or even his readers—can actually see quality in the wild. At times Pirsig treats the task of explaining it like his burden to bear. Yet the idea that something is just good and true for ineffable reasons that defy both logical explanation and romantic self-projection should be familiar to anyone who has listened to Nina Simone sing “I Wish I Knew How It Would Feel to Be Free.” As Pirsig himself acknowledges: we all know.

Sometimes, while scrolling through TikTok late at night, I’ll come across a genre of video in which vocal coaches analyze viral clips of performances by young, effusive singing machines who have been through years of training. Nothing could be more annoying or besides the point than the coaches’ gushings over the control of the upper registers, or the clean transitions in the runs. Pirsig would probably say that these sorts of categorizations are purely an intellectual, and ultimately futile, exercise: he argues—correctly—that only pedants feel the need to contextualize every quality moment into a narrative that tries to discern its truth. But it’s perhaps even more pedantic to process so much of this idea through lengthy, philosophical treatises that try to obscure and make unknowable something we feel nearly every day.

Quality, Pirsig says, surrounds us. It is in a rug cleaned with care, a well-maintained garden, and the order of words in a sentence. I do not know if there is a way to trick oneself into noticing more of these instances of quality, nor do I know if enlightenment rests on the accumulation of little ecstasies, nor do I believe—at least anymore—that those of us who have sought the path through books, meditation, or study have any more access to “quality” than those who have not. If there’s one thing I would say to Pirsig, or even that younger self driving across Montana whose head was filled with a vain, almost-inhuman spirituality, is that everyone, in their way, is trying to find the thing you’re trying to find. ♦