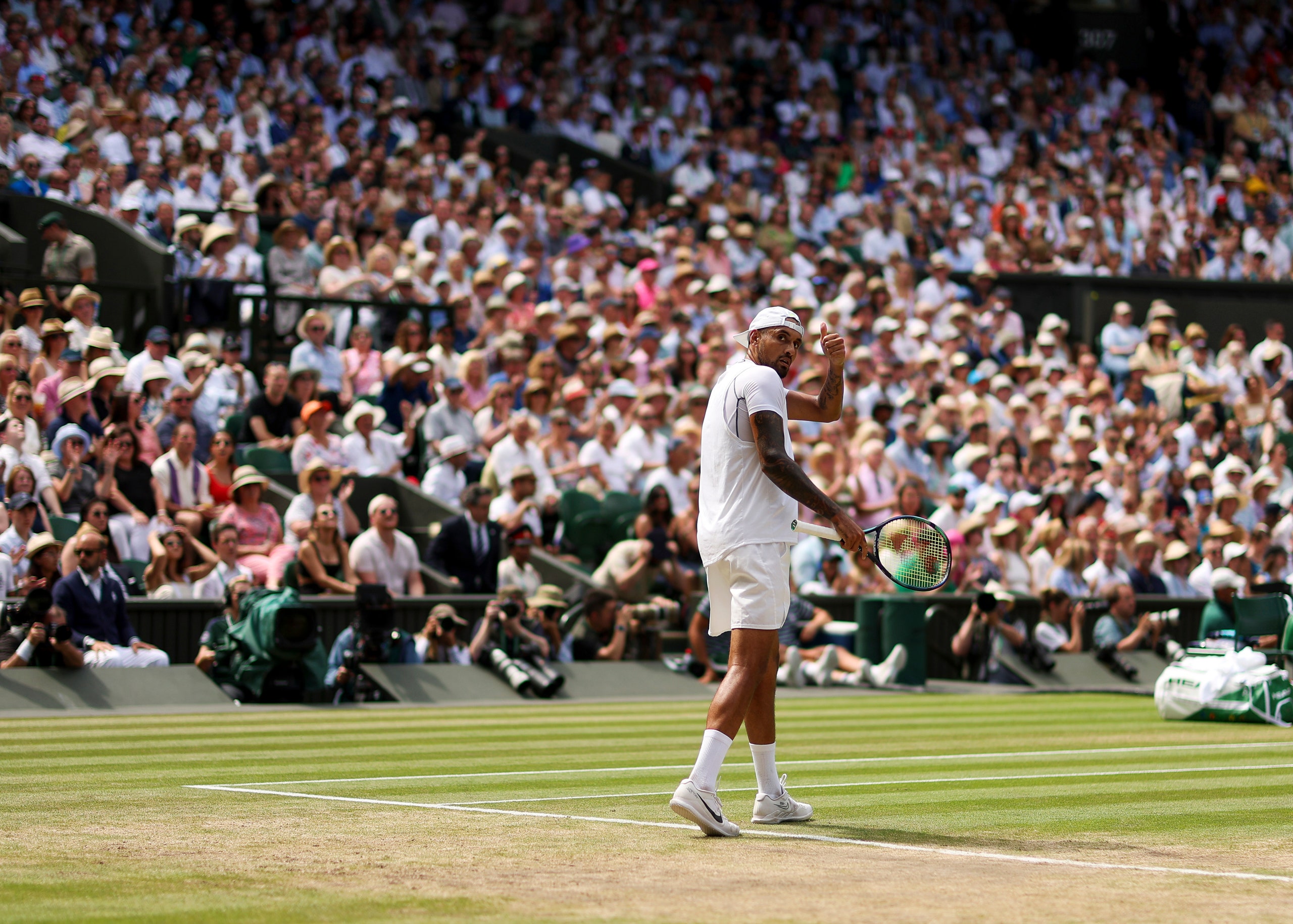 When the match was over, Nick Kyrgios pulled on a bright-red cap. It was one last silly protest against the silliness that surrounded him: Wimbledon’s traditional all-white dress code; the hallowed hush of Centre Court; the eight-year-old boy sitting in the front of the royal box, weathering the intense heat while wearing a suit and a tight Windsor knot. Kyrgios had pulled out the red hat before, after his fourth-round match against Brandon Nakashima, inviting a rebuke or fine. When asked why he’d flagrantly broken the rules, he said, “Because I do what I want.” Now Kyrgios pulled the hat low, like a shield, and waited for the Duchess of Cambridge to bring him his consolation prize, a plate instead of a cup.

For once, he could also take consolation from his effort—never a sure thing from Kyrgios. He’d lost despite playing well, he said after the match, while he praised the champion, Novak Djokovic, and he was right. For more than a set, Kyrgios had been sublime. With a sudden, simple service motion that betrayed nothing about the ball’s placement, spin, or speed, he had won points at will. He’d slapped forehands down the line, nimbly set up crosscourt shots, and wrong-footed Djokovic more than once. Kyrgios, who usually has a tendency to rush points by taking risks (and sometimes shows up out of shape), was even the better defender, at the start, covering the ground with long, loping strides. He won seven of the first eight points of nine shots or more. But with Djokovic serving at 1–1, 3src–all, the two played a twenty-three-shot rally, and over the course of it the balance of power between the two players began to shift. Djokovic gained control. After sending a nonchalant backhand long, Kyrgios gave a little annoyed flick of the head. The next point went nineteen shots—again, in Djokovic’s favor. In the next game, Djokovic broke Kyrgios at love.

Djokovic’s steadiness worked like rain, seeping into the crack in Kyrgios’s concentration. Kyrgios muttered and yelled; berated the umpire, the crowd, and his supporters; took bigger risks, tried trick shots, and misfired. Now Djokovic was the one controlling baseline rallies, particularly by picking on Kyrgios’s forehand out wide.

Djokovic was playing in his thirty-second Grand Slam final. He was going for a twenty-eighth consecutive match win on Centre Court, and was going for his fourth straight Wimbledon title, his seventh over all. He had won twenty major titles, and, if not for a few very dubious decisions, probably would have already won a couple more. On the court, his stubbornness and self-belief have always served him well. As much as any player in the game’s history, he is in control: of his body, his mind, and the ball; of the flow of a match, and the sequence of shots. He has an eerie ability to smother his opponents’ best stuff.

The contrast between Djokovic and Kyrgios was hard to miss. But, despite the consistently high quality of play, it became hard to watch. Djokovic, characteristically, was content to absorb and blunt Kyrgios’s power. Always disciplined, he correctly identified the critical points. Kyrgios, for his part, seemed as if he might combust.

Kyrgios defends his antics as entertaining. (They aren’t if you’re a line judge.) That defense, like the rest of his story, has become a little worn out. For years, Kyrgios has said that there are things he prefers to tennis: basketball, his couch, his PlayStation, his dogs. He has said that he’d never been accepted by the Australian tennis establishment, and didn’t want to be. His father is a Greek immigrant who worked as a house painter; his mother came from Malaysia. He got tattoos, pierced his ears, tanked matches. It wasn’t his fault that he had a loose arm, or calm hips, or soft hands. He didn’t ask for one of the greatest serves in the history of the game: somehow, it just happened. He talked about his talent as a burden. Winning tennis matches wasn’t everything to him. He could make it sound like it was nothing. When I profiled him for this magazine, in 2src17, he told me that he just wanted to be happy. He just wanted to put on a show.

Back then, everyone agreed that Kyrgios was a player of transcendent promise—particularly on grass, which was perfectly suited to his quick, ingenious game. Not everyone agreed that he would fulfill that promise. He, for one, doubted it. He didn’t want to travel. He didn’t want to train. He didn’t want to be Roger Federer. He wasn’t sure he wanted to be a No. 1 player—or, at least, to do what he would have to do to be one. It required an insane effort to be the best at a game that involved polite audiences watching two adults bat a little ball around a small, intensively tended grass plot. What was the point?

It was a good question. But it became clear that Kyrgios, who had built his image on not caring, wasn’t interested in answering it. Posing it became a kind of posturing. Coming into this year’s Wimbledon, Kyrgios hadn’t won a singles title in three years. Until this grass-court season, few even rated him a dark horse anymore. When he lost, and he often did, he blamed others. Without competitive intent, he played without purpose. Perhaps he lived that way, too. He bullied line judges, raged at crowds. He became depressed, he has said, and was haunted by thoughts of self-harm. His volatility was apparent on the court and off. On August 2nd, he will appear in court in his home town of Canberra, facing accusations of grabbing a former girlfriend in a dispute. (Kyrgios has not yet commented on the accusations; his lawyer has said that “in the fullness of time” Kyrgios is “committed to addressing any and all allegations.”)

What was the point? Kyrgios might have found an answer, by now, in any number of places. Ons Jabeur, who this year became the first Arab woman and the first North African woman to reach the Wimbledon final, embraced her role as a trailblazer for Tunisians and for Arab women. Jabeur plays with such creativity and obvious joy that she has earned the nickname Minister of Happiness; she saw Wimbledon as a chance to inspire people, not as an invitation for contempt. Alternatively, Kyrgios might have learned something from Elena Rybakina, who defeated Jabeur in the final on Saturday, in three sets. Rybakina stopped representing her native Russia shortly after turning nineteen, switching to Kazakhstan in exchange for support and enough funding to hire a full-time coach. Though she could not have known it at the time, it was a move that allowed her to play this Wimbledon, after Russian and Belarussian players were banned in response to Russia’s invasion of Ukraine. Asked for her feelings about the war, Rybakina demurred. But she made it clear that the switch had allowed her to play first for herself—to have the means to see how good she could become.

Sports are largely about wanting something; it hardly matters what. People agree upon a set of rules, create a goal, and commit to it. The commitment turns out to be the end, not the means. “I was telling people back home that I wanted to go for the title this year round,” Kyrgios said, after reaching the quarterfinals at Wimbledon. “I’m not thinking about lifting a trophy or making semifinals or making the final. I’m just thinking about my habits every day, just trying to put in a good performance on the court, then put in a good practice session, try to stay positive.” But, after the final, while being interviewed on court, Kyrgios was asked whether his success made him hungry for more. He answered no. He was exhausted. He’d had enough.

Djokovic took his victory—4–6, 6–3, 6–4, 7–6 (3)—in stride. “I’ve lost words for what this tournament and what this trophy means to me,” he said. Because of his refusal to get vaccinated for COVID-19, it is unlikely that he will have the chance to play in another Grand Slam until next spring. ♦