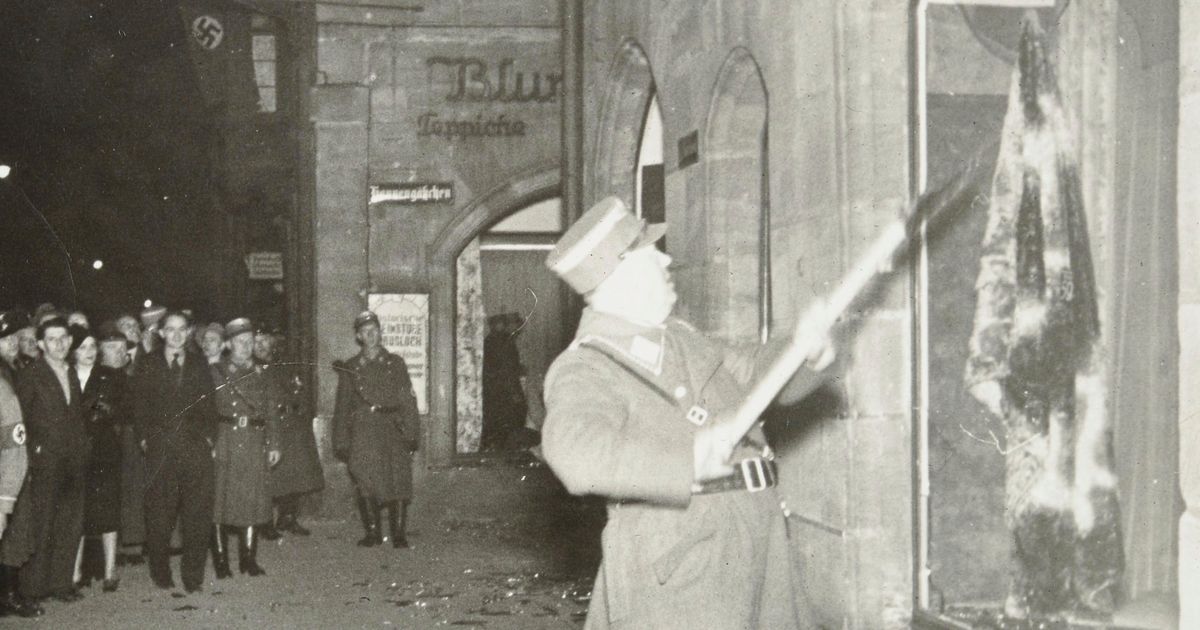 One shows a crowd of smiling, well-dressed middle-aged German men and women standing casually as a Nazi officer smashes a storefront window.

In another, brownshirts carry heaps of Jewish books, presumably for burning.

Another image shows a Nazi officer splashing gasoline on the pews of a synagogue before it’s set alight.

Yad Vashem — The World Holocaust Remembrance Center released the photographs on the 84th anniversary of the November pogrom also known as Kristallnacht, or “The Night of Broken Glass.”

Mobs of Germans and Austrians attacked, looted and burned Jewish shops and homes, destroyed 1,400 synagogues, killed 92 Jews and sent another 30,000 to concentration camps.

The violence is widely considered a starting point for the Holocaust, in which Nazi Germany murdered 6 million Jews.

Jonathan Matthews, head of Yad Vashem’s photo archive, said the photos dispel a Nazi myth that the attacks were “a spontaneous outburst of violence” rather than a pogrom orchestrated by the state.

Firefighters, SS special police officers and members of the general public are all seen in the photos participating in the Kristallnacht.

The photographers themselves were an integral part of the events.

Matthews said these were the first photos he was aware of depicting actions taking place indoors, as “most of the images we have of Kristallnacht are images from outside.”

Altogether, he said, the photos “give you a much more intimate image of what’s happening.”

The photos were taken by Nazi photographers during the pogrom in the city of Nuremberg and the nearby town of Fuerth.

They wound up in the possession of a Jewish American serviceman who served in Germany during World War II — how, precisely is uncertain, he never talked about them to his family.

His descendants, who declined to give his name, donated the album to Yad Vashem as part of the institution’s effort to collect Holocaust-era objects kept by survivors and their families.

Yad Vashem said the photos help demonstrate how the German public was aware of what was going on, and that the violence was part of a meticulously coordinated pogrom carried out by Nazi authorities.

They even brought in photographers to document the atrocities.

Yad Vashem Chairman Dani Dayan said the photos will “serve as everlasting witnesses long after the survivors are no longer here to bear testimony to their own experiences.”