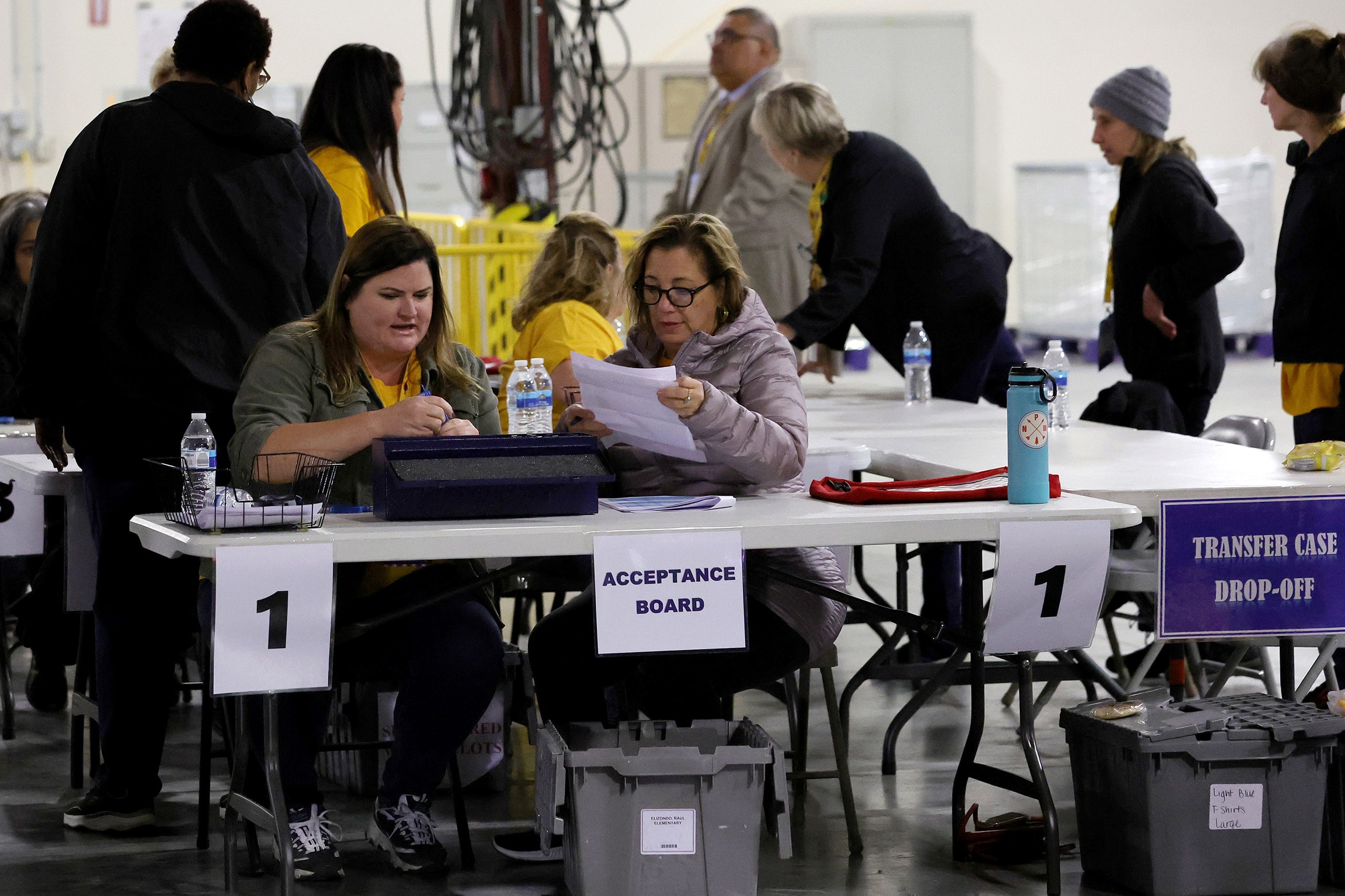 Less than twenty-four hours after the polls closed in Nevada, with key Senate races called in states across the country, Joseph Gloria took the lectern at the Clark County Election Center, in Las Vegas. Tens of thousands of ballots remained uncounted, Gloria, the local registrar of voters, said, and more than five thousand had yet to be reviewed for signature matches. “That number will continue to grow until we’re finished processing mail ballots,” he added. Outside the building, a gray concrete complex, sat several trailers emblazoned with the words “VOTE EARLY”; inside, scores of silver carts had been emptied. Practically all in-person votes cast on Election Day had been processed, Gloria said, but it would be days before final results could be released. Deluged with dozens of questions from reporters, Gloria offered a silver lining. “Turnout was good for a midterm,” he declared, in an even tone. “We definitely got more Election Day turnout than we did in 2src2src.”

Nevada now sends mail-in ballots to all registered voters, and any ballot delivered by the Postal Service within four days of the election is counted. Because so many voters sent in their ballots by mail, vote counting in Nevada is slower than in many other states. During the last general election, it took three days for Joe Biden’s win in Nevada to be announced. Clark County—the state’s most populous—carries significant weight. With more than a million registered voters, it accounts for nearly three-fourths of the state’s electorate. In the Senate race, the Democratic incumbent, Catherine Cortez Masto, is currently ahead of the Republican Adam Laxalt in Clark County by five points; Biden carried the county by a margin of nine in 2src2src. Statewide, in sparser counties, Laxalt holds a strong lead: his prospects improved overnight on Tuesday, when results from Lyon and Douglas counties started to trickle in, eventually placing him some twenty thousand votes ahead of Cortez Masto. As of Wednesday afternoon, there was a difference of nearly sixteen thousand votes between the two candidates.

Democrats hope the remaining mail-in ballots will help Cortez Masto erase her opponent’s lead. Matt Barreto, the co-founder of the polling firm BSP Research, noted that mail-in votes in Clark County have been breaking by two to one for the Democrat. By Friday, Barreto expects Laxalt’s lead to vanish. Laxalt himself has offered a different prediction, focussing instead on his campaign’s sweeping victories across rural counties. “We expect the remaining mail universe to fall well below the percentage she needs to catch us,” the candidate wrote on Twitter.

Observers are paying equally close attention to Washoe County, the second-largest in Nevada, which is home to Reno and, together with Clark County, accounts for almost ninety per cent of the state’s population. “It’s not just about whether she can keep pace in Clark,” Mari Urbina, a former senior adviser to Senator Harry Reid, told me. “It’s whether she can keep from bleeding in Washoe.” Whereas Clark has traditionally been seen as the Democrats’s firewall, Urbina added, Washoe is a battleground county. “Holding on strong there is important,” Urbina, who is now a managing director at Indivisible, a progressive group, said. “Biden won Washoe based on that Wednesday-to-Thursday mail count.”

Tens of thousands of mail-in ballots are still being counted in Washoe, and electoral officials estimate the majority will be tallied by the end of the day on Friday. “Please be patient,” Jamie Rodriguez, the county’s interim registrar, told reporters. “We don’t want to do it fast; we want to do it right.” As in Clark County, Barreto predicts that mail-in ballots will break for Cortez Masto by two to one. The “critical margin of victory,” Barreto said, will be the senator’s ample lead among Latino voters in Nevada, sixty-four per cent of whom likely voted for Cortez Masto, according to polling by BSP.

Another key takeaway, compared with the last general election, is that the counting process in Nevada has until now gone uncontested. At this stage in the race, two years ago, the Trump campaign had falsely claimed that there had been “thousands of individuals who improperly cast mail ballots” in Nevada. The state’s Republican Party had also made a criminal referral alleging more than three thousand cases of voter fraud. Biden ended up winning the state by little more than thirty thousand votes—a result that the Trump campaign tried to dispute with the support of Laxalt, a former state attorney general. Security officials in the state remain on high alert for any signs of violence related to the election. So far, there have been none.

Near a side entrance to the Clark County Election Center, a small group of observers sat in a row of chairs set against a wall. When I asked for an interview, one of them turned to the woman sitting beside her and said, “Can I tell them the truth?” The woman, Susan Proffitt, a conservative observer, stood up and told me that the state’s electoral authorities were “stalling” the count. She provided no concrete evidence of her claim. A voluble woman of sixty-seven, Proffitt insisted that the Democrats rigged the last Presidential election. “I have thirteen volumes on 2src2src,” she went on. Her views mirrored those of Laxalt, who had claimed voter fraud in Nevada two years ago and joined Donald Trump’s effort to overturn the state’s Presidential-election results. For now, the Republican Senate candidate had counselled patience, urging his supporters to wait “as all the votes were tabulated.”

Back at the lectern on Thursday, Gloria started out by addressing a false claim made by Trump. “Because I really feel that it’s important that we defend the integrity of our process,” the registrar said, with an air of exasperation, “I’m going to make a brief statement.” Hours earlier, Trump had declared on Truth Social that the county “has a corrupt voting system (be careful Adam!), as do many places in our soon to be Third World Country.” Around eight thousand users of the platform shared the former President’s post. “Obviously he is misinformed, two years later, about the law and our election processes,” Gloria said. “Why would I rush through carelessly to process these ballots?” ♦