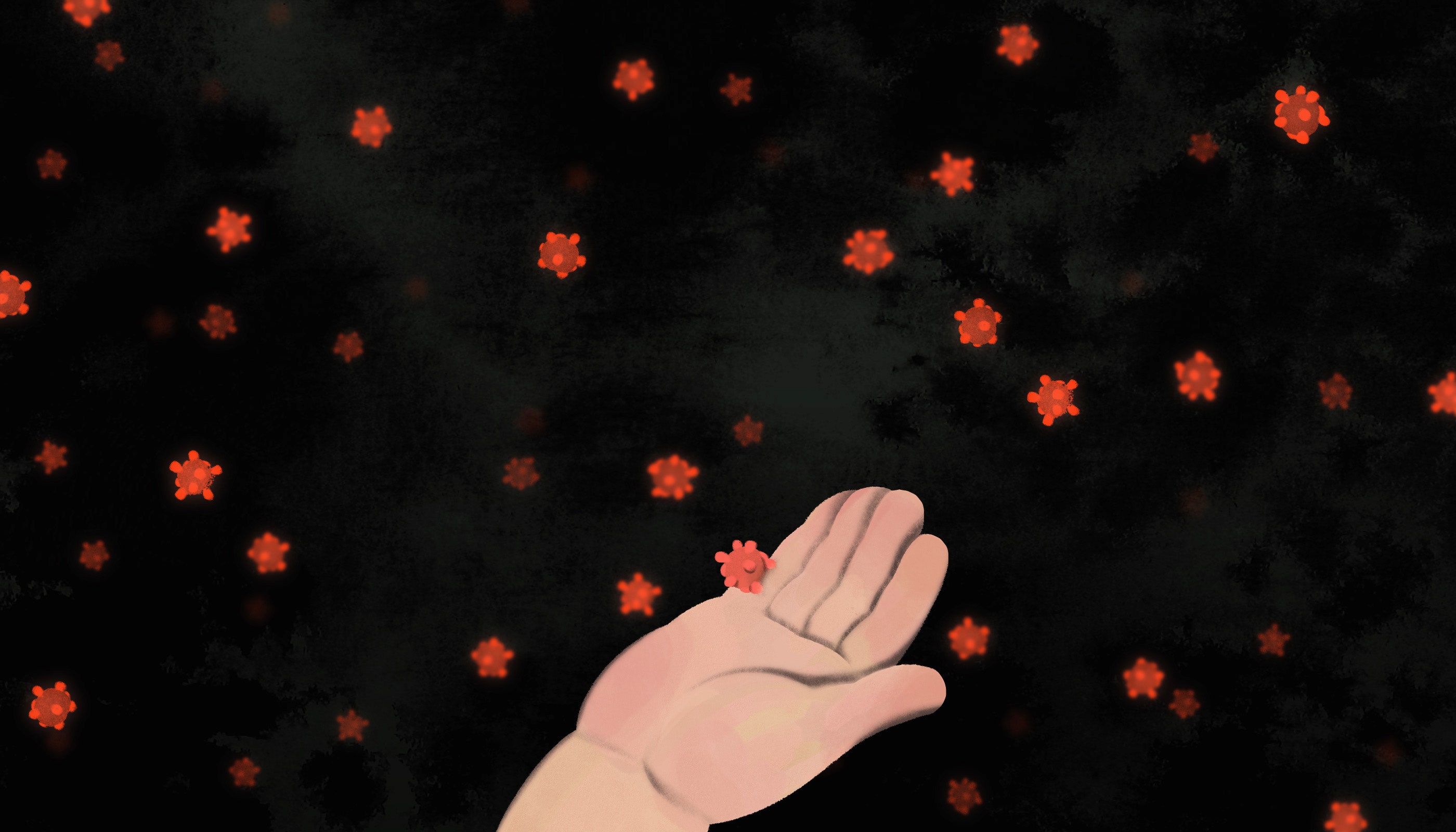 A few weeks ago, just after returning from a brief reporting trip to Baton Rouge, I went with my wife, Heather, and our two children on a late-summer vacation to a small house we’d rented in the Catskills. The house had caught our eye: it was a tiny place, a sort of architectural bento box that suggested the delineation of space without actually having walls between rooms. Arriving, we thought, This is going to work. The kids loved it immediately. There were all kinds of drawers and compartments to go through, everything made to fit, and there was a fire pit where we made s’mores, and everywhere we went the mountains opened up in front of us beautifully. We were operating, we knew, in spite of the pandemic; we’d booked late and overpaid. But by the second day we started to experience the happy, seditious feeling of vacation—it felt as if we were getting away with something.

On day three, on a big hike to a waterfall, across mountain streams flooded by rain, I felt two sharp pinches on the right side of my chest. The first was just after we’d forded a stream, when I grabbed my son by the arms and swung him across to the bank. The second was about ten minutes later, at the top of a climb. The rest of the hike was uneventful (though the waterfall was spectacular), but when we got back to the house all I wanted to do was lie down. “Daddy carried a really heavy backpack,” my son explained to his sister. Maybe? I thought. It wasn’t that heavy. The next morning, we took the kids to Storm King Art Center, and I felt fine, but when we got back to the house I just climbed upstairs to the loft and immediately fell asleep. It was mid-afternoon. Heather, who is an oncologist, came up to assess the situation. My lower back and shoulders were aching, and I felt as if my face were burning, but I had no fever, and I didn’t feel in any special distress. It could be COVID-19, she pointed out, but we were both fully vaccinated and had been so careful.

“Oh, no,” Heather said with medical finality, and from that point forward I was pretty sure what was going on.

The next morning, I drove to an urgent-care clinic in Kingston. I found, oddly, that I felt a little better than I had the day before. The muscle ache was gone. My temperature read 98.2. When a nursing assistant asked what my main complaint was, I said, “Fatigue.” But the symptoms and my travel to Louisiana were enough, so the nurse practitioner ordered a rapid test, and about fifteen minutes later it came back positive. COVID it was.

I found it a little hard to make sense of my situation. On the one hand, I wasn’t that sick, and I knew the statistics well enough to understand that I probably wasn’t going to get that sick. Detailed data from the public-health department of King County, Washington, (which includes Seattle) suggest that vaccination cuts an individual’s risk of hospitalization and death to less than a fortieth of what it would be otherwise. Researchers at Yale conducted a study of the breakthrough cases in their health system and found that the average age of the patients sick enough to require oxygen was just over eighty. (Those data were collected before the Delta surge, but when I spoke with the lead author, Dr. Hyung Chun, he told me that the average age of recent breakthrough cases had come down by just a few years.) I asked Dr. Céline Gounder, an infectious-disease doctor and COVID expert at N.Y.U., if these statistics meant that a breakthrough case was similar, in terms of severity and risk, to having the flu. “I think that’s a good comparison,” she said.

I was relatively protected from harm, but that didn’t mean others were completely protected from me. Those maps which show vaccination rates by state make it seem as if we live in two countries, one vaccinated and the other not, but that seemed pretty misleading—there were unvaccinated people all around me. Massachusetts, where we live, ranks fourth in the nation for vaccination, with sixty-seven per cent of residents fully inoculated, but that still leaves an awful lot of unprotected people. Our kids, who would be starting first and fourth grade in a few days, were not yet eligible for vaccines, and neither were any of their friends. Heather sees breast-cancer patients, many of them immunosuppressed, in clinic every Wednesday. Almost all of them were vaccinated, but they would be especially vulnerable to breakthrough infections, and a few had not received the vaccine. Meanwhile, I had developed a hacking cough and was sneezing, making it plain that I was projecting the virus all over the place. I wasn’t very sick but I was still a threat.

The bento-box house suddenly seemed ridiculous. If we wanted Heather to see patients and the kids to start school on time, they needed to be quarantined from me, and you can’t quarantine in a house that substitutes elegant architectural suggestion for walls. We packed up and drove back home. On the way—between phone calls from public-health nurses, and with their assistance—we made a plan. I’d stay by myself in our home office and sleep on the pullout couch there. If I left the room, or if someone else came in, I would wear a KN95 mask. I would use the smaller bathroom, and everyone else the larger one. I ate dinner in the office while Heather and the kids ate dinner in the dining room, and we yelled banter at one another from two rooms away, which mildly alarmed the kids and highly alarmed our dog. A friend had sent a boxed bonsai (“Something to do!”), but I just looked at the box resentfully. I thought, So this is what it is like to be divorced. One evening, after the kids were in bed, Heather came in to say hello. Both of us were wearing KN95 masks. “What are you—” she began. She meant to say, What are you watching? I had an episode of “The Bureau” playing on the computer, in French with subtitles, probably a bit too loud. At the same time, open on my lap, ostensibly being read, was a book about the rise of Nazism. She said, “What are you doing?”

Whatever I was doing—whatever we were doing collectively—it didn’t work. On Saturday morning, four days after my first symptoms, our daughter, Maude, said she felt a scratch in her throat. Everyone got tested. Maude had COVID; Heather and our son, Sam, did not. We made new plans. Maude would stay in the spare bedroom with me, where we would eat and sleep, and we would share the second bathroom. I felt very guilty: my daughter was sick because of me and would now miss the first week of school. But that also meant I could read “Harry Potter” with Maude before we went to bed, and talk about what fourth grade would be like, and have some semblance of a normal parental life.

By this point, we were in regular touch with nurses from at least five different jurisdictions: the public-health nurse from the town where we live, who called every morning (we came to know her well enough that I began my e-mails to the public-health account with “Hey E.J.”); the school nurses; the occupational-health nurses from Heather’s hospital; the nurses from the pediatrician’s office; and the nurses from my primary-care physician’s office, who were conducting some sort of study and wanted daily updates on my condition, which remained basically unchanged. I had a bad cough but otherwise felt fine. Having a breakthrough case of COVID, for me, turned out to be thirty-six hours of flu, followed by ten days of being in the Army. The four of us now each had our own timeline for a return to normal, and different isolation conditions we had to follow. Quite quickly, it seemed to us that we would not be able to keep Sam and Maude from playing with each other, so we made a fateful decision. We called Heather’s parents—both about seventy years old and vaccinated—and asked if they would take Sam for a few days, until Maude and I had finished our ten-day quarantines and he could go to school. They live on a lake, and he could swim there—a much better environment before first grade, we thought, than an apartment filled with contagious disease. Eager to help, Heather’s parents thought that it was a good idea, too. Sam had just tested negative, so the risk to my in-laws did not seem so high.