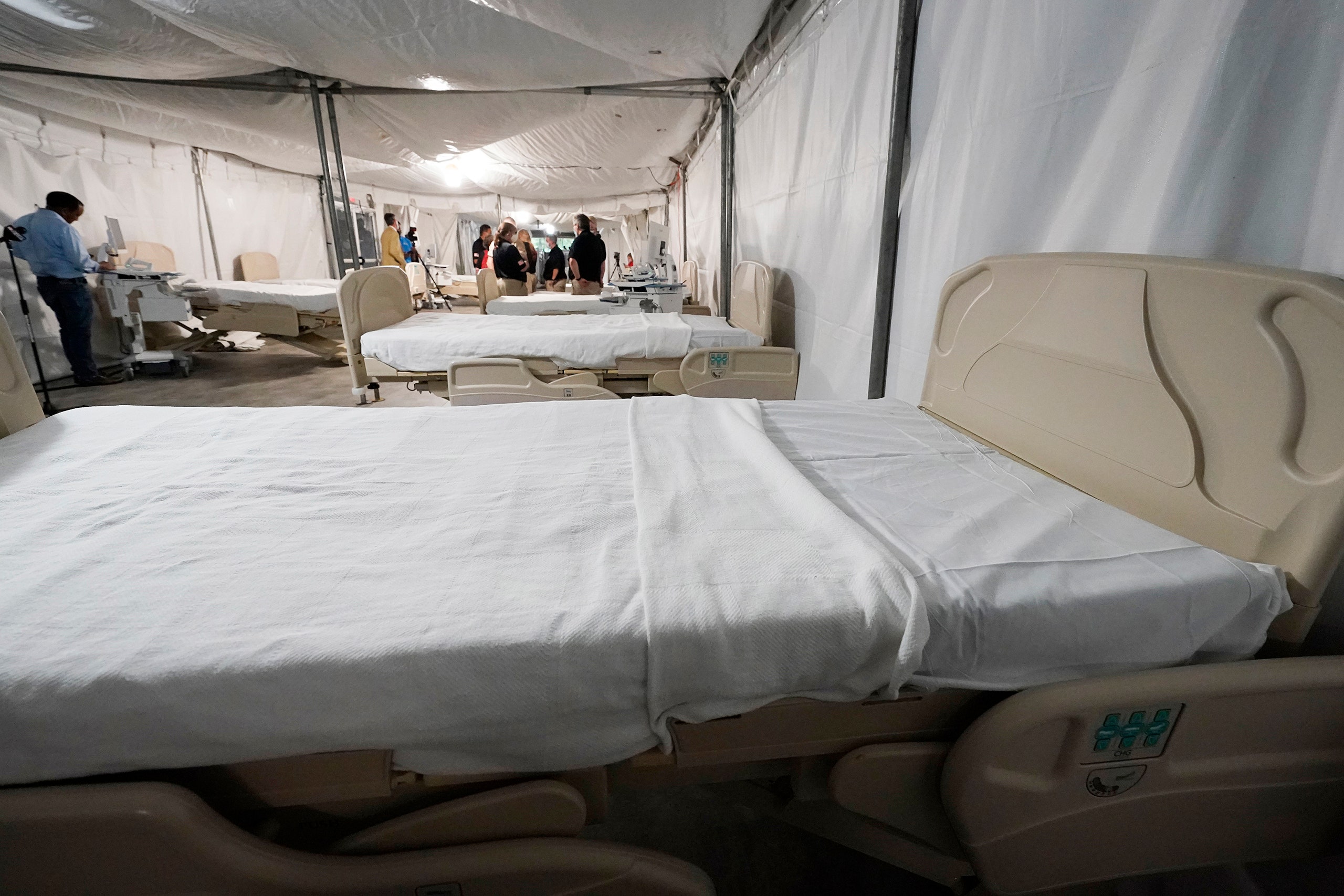 Thomas Dobbs, Mississippi’s state health officer, is an epidemiologist and infectious-disease specialist in his early fifties, with boyishly wavy hair and a courteous but direct manner. His wife, Kim, is a pulmonologist. One of their sons, Wyn, is in medical school in Washington, D.C. Until COVID-19 struck, last year, Dobbs’s expertise had involved communicable illnesses like tuberculosis. Mississippi, the unhealthiest, poorest, least-educated state in the nation, has the second-lowest COVID-19 vaccination rate, behind only Alabama: thirty-six per cent of Mississippians have received the shot, compared with fifty per cent nationwide.

Dobbs, a registered Republican who strives to remain apolitical, is known for his ability to explain urgent medical information with calm lucidity. For the past year, he has patiently told residents that there is a clear path to ending the pandemic: vaccine, mask, distance. But most Mississippians have been reluctant to follow these guidelines, even amid the escalating spread of the Delta variant, which Dobbs calls “an entirely different animal.” Repeatedly, he explains this to the public: Delta is about three times as contagious as previous strains, and its effects appear to be more severe.

As the variant emerged, in July, Dobbs suspected that Mississippi would eventually see about a thousand new cases daily, but the caseload reached double that amount by August 2nd. Around that time, five thousand new cases appeared in one three-day weekend. More than two hundred people were placed on ventilators. At least twelve of those hospitalized were children. Nearly thirty thousand children between the ages of eleven and seventeen caught the virus. Two teen-agers died. Mississippi was now “in the midst of our fourth and most challenging wave,” Dobbs announced. He said, “It’s really bad, y’all.” Virtually all of the state’s I.C.U. beds are now full.

On Wednesday, Alan Jones, a senior administrator at the University of Mississippi Medical Center, announced that the state’s hospital system is approaching the “nightmare” that officials have “feared the most . . . total failure.” He said, “Within the next five to seven to ten days, I think we’re gonna see failure of the hospital system in Mississippi. I mean, hospitals are full from Memphis to Gulfport, Natchez to Meridian. Everything is full.” Owing to a shortage of both beds and staff, hospitals will be unable to treat not just COVID-19 patients but heart-attack and car-accident victims. The center’s pediatric hospital was already full. Jones said, “If there were a bus wreck of kids, we would not be able to take care of all those kids at this hospital.”

Nearly all of these new COVID-19 patients were unvaccinated. Dobbs has called the surge unnecessary—vaccination and wearing a mask are basic acts of both selflessness and self-defense. In Oxford, in northern Mississippi, parents have been warring, on Facebook, about a school mask mandate, despite the fact that children under the age of twelve are too young to be vaccinated. Dobbs has said, incredulously, “We’ve lost more people from COVID than we have from World War Two, and we’re not even willing to wear a mask or get a shot or stay away from a bar.”

Mississippi overwhelmingly votes Republican, the Party whose members have continually downplayed the pandemic as liberal hysteria and decried public-health measures as evidence of a “communist” plot. In the past two Presidential elections, Mississippi supported Donald Trump, who, as President, repeatedly denied the danger of COVID, called the pandemic a Democratic “hoax,” and refused to wear a mask. In Mississippi, eleven of the twelve counties with the lowest full-vaccination rates voted for Trump in 2020, the Clarion-Ledger recently reported. Nationally, nearly sixty per cent of the people who say that they will “definitely not get the vaccine” are Republican, according to a recent Kaiser Family Foundation poll.

Local and national pundits at such right-wing outlets as the Mississippi-based American Family Association, Newsmax, and Fox News have created an impression that it is ridiculous, dangerous, or sacrilegious to get vaccinated. Dobbs has publicly decried the “mind poison” of “some of the cable news stuff” and the “noxious social-media environment” surrounding COVID-19. Citing policy debates “based on mistruths,” he said, “We have allowed lies and disinformation to fool us.” Mississippians had been misled into believing that the vaccine would sicken them worse than the disease. People who had already contracted and recovered from the virus wrongly assumed themselves safe. (Natural immunity alone may be insufficient.) Researchers are increasingly documenting the scope of long-term complications from the disease, which, so far, include damage to the heart, brain, and reproductive system. “COVID is bad for you,” Dobbs said, in a public, live-streamed event with the Mississippi Free Press. “It’s not like getting a cold and getting over it.”

The governor, Tate Reeves, a Republican, has been of little help. On July 29th, he stood onstage at the Neshoba County Fair—an enormous, eight-day political event where families share cabins—and called the latest mask guidelines from the Centers for Disease Control and Prevention “foolish and harmful.” He added, “It has nothing to do with rational science.” Reeves advised parents to “erupt” if school districts mandated masks. Other red-state governors, meanwhile, have begun imploring their citizens to get vaccinated—even Alabama’s governor, Kay Ivey, recently came around, saying, “It’s time to start blaming the unvaccinated folks.” On Facebook, one Mississippian compared Reeves’s behavior to “watching a toddler try to figure a quadratic equation. except, you know, people die due to your ineptitude.” (Nearly eight thousand Mississippians have died because of COVID.)

The more Mississippi’s elected officials fail to lead, the more unnecessary work it creates for Dobbs and his staff. At the Free Press event, Dobbs answered question after question about the risk level of various scenarios, many related to the return to school. A full lunchroom? Bad idea, Dobbs replied. Assemblies and pep rallies? “Very bad idea,” Dobbs said. He cautioned parents and educators about buses and strongly urged universal masking, explaining—yet again—that we get infected by “breathing other people’s air.”

Dobbs has found it necessary to remind people that “COVID is science. There’s nothing political about breast cancer, heart attacks.” The pandemic will continue—and the virus may mutate and worsen—as long as people refuse to get vaccinated. The other day, Dobbs’s ability to balance urgency with clarity was tested. A radio host who was interviewing him compared the coronavirus to “a living, breathing enemy that’s intelligent enough that it knows what it’s doing.” Dobbs resisted a hyperbolic answer, replying, “The less it can spread, the more likely it’s gonna fade or fade out.” He later tweeted that the state of three million still needed about a million more “immune Mississippians.”

Asya Branch is from the small town of Booneville, in the northeastern corner of the state. While a student at the University of Mississippi, she became the first Black Miss Mississippi U.S.A. Last November, she was crowned Miss U.S.A., in a televised ceremony at Graceland. (Trump owned the organization until 2015; it’s now owned by the Endeavor company.) Branch immediately—and mid-pandemic—moved from Booneville to midtown Manhattan, where, by tradition, the reigning Miss U.S.A. lives. “It was a unique transition,” she told me.

Branch’s primary social cause is the children of incarcerated parents—her father, Anthony, served more than a decade in prison for two felonies. When Paula Shugart, the president of the Miss Universe Organization, which manages the Miss U.S.A. pageant, suggested “taking on COVID,” Branch did not hesitate. She told me, “I’m fully vaccinated. I get tested regularly.” She travels with antibacterial wipes, hand sanitizer, and disposable pink masks, which she buys, in bulk, from Amazon. The stash means that she always has extras, for people who need them.

Last week, a day after Dobbs tweeted that Mississippi needed at least a million more vaccinated residents, Branch flew from Newark to Atlanta to Jackson, with Miss U.S.A.’s communications director and a videographer. They took an Uber from Jackson-Medgar Wiley Evers International Airport to the Westin hotel, downtown. Branch changed into an ivory shorts suit, four-inch Lucite block heels, and a satin “MISS USA” sash trimmed in pink rhinestones. She wore her sleek hair down, her nails and eyelashes long.

In some parts of the country, a vaccination drive can be as easy as pointing participants to a specific address at an appointed time. Vaccine-hesitant areas have often required enticements, including lottery payouts. On the Mississippi Gulf Coast, one health-care center distributed fifty-dollar gift cards. Health officials had learned that the vaccination process also had to be easy—no pre-registration—and convenient. Vaccinations had to be offered during lunch hours and during shift changes, and before dark. In Jackson, Branch offered to take selfies with anyone who got vaccinated.