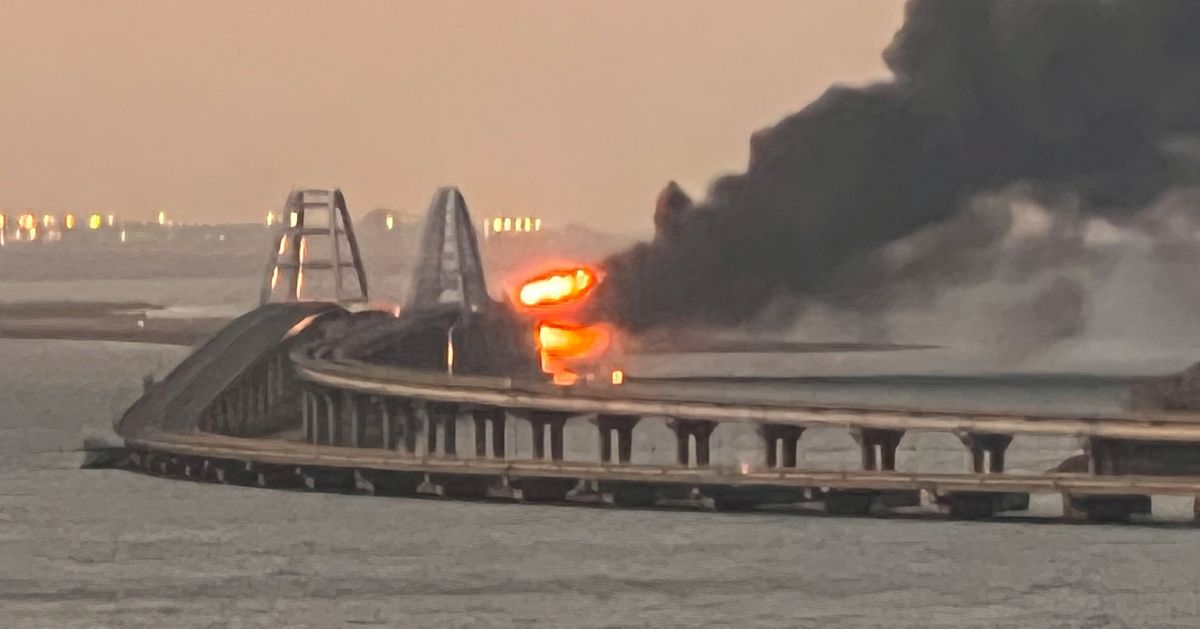 The speaker of the Russian-backed regional parliament in Crimea immediately accused Ukraine of being behind the explosion; Moscow didn’t apportion blame. Ukrainian officials have repeatedly threatened to strike the bridge and some lauded the destruction, but Kyiv stopped short of claiming responsibility.

The explosion risked a sharp escalation in Russia’s eight-month war, with some Russian lawmakers calling for President Vladimir Putin to declare a “counterterrorism operation” in retaliation, shedding the term “special military operation” that had downplayed the scope of fighting to ordinary Russians.

Crimea, the bridge, the beginning. Everything illegal must be destroyed, everything stolen must be returned to Ukraine, everything occupied by Russia must be expelled. pic.twitter.com/yUiSwOLlDP

The Kremlin could use such a move to broaden the power of security agencies, ban rallies, tighten censorship, introduce restrictions on travel, and expand a partial military mobilization that Putin ordered last month.

Hours after the explosion, Russia’s Defense Ministry announced that the air force chief, Gen. Sergei Surovikin, would command all Russian troops in Ukraine. Surovikin, who over the summer was placed in charge of troops in southern Ukraine, had led Russian forces in Syria and was accused of overseeing a brutal bombardment that destroyed much of the city of Aleppo.

On Saturday, a Kremlin-backed official in Ukraine’s Kherson region announced a partial evacuation of civilians from the southern province, one of four illegally annexed by Moscow last week. Kirill Stremousov told Russia’s state-run RIA Novosti agency that young children and their parents, as well as the elderly, could be relocated to two southern Russian regions because Kherson was getting “ready for a difficult period.”

The 19-kilometer (12-mile) Kerch Bridge, on a strait that connects the Black Sea and the Sea of Azov, is a tangible symbol of Moscow’s claims on Crimea and an essential link to the peninsula, which Russia annexed from Ukraine in 2014. The $3.6 billion bridge, the longest in Europe, is vital to sustaining Russia’s military operations in southern Ukraine. Putin himself presided over the bridge’s opening in 2018.

The attack on it “will have a further sapping effort on Russian morale, (and) will give an extra boost to Ukraine’s,” said James Nixey of Chatham House, a think tank in London. “Conceivably the Russians can rebuild it, but they can’t defend it while losing a war.”

Russia’s National Anti-Terrorism Committee said a truck bomb caused seven railway cars carrying fuel to catch fire, resulting in the “partial collapse of two sections of the bridge.” A man and a woman in a vehicle on the bridge were killed, Russia’s Investigative Committee said. It didn’t say who the third victim was.

All vehicles crossing the bridge are supposed to undergo state-of-the-art checks for explosives. The truck that exploded was owned by a resident of the Krasnodar region, in southern Russia. Russian authorities said the man’s home was searched and experts were looking at the truck’s route.

Train and automobile traffic over the bridge was temporarily suspended. Automobile traffic resumed Saturday afternoon on one of the two links that remained intact from the blast, with the flow alternating in each direction, Crimea’s Russia-backed regional leader, Sergey Aksyonov, wrote on Telegram.

Rail traffic was resuming slowly. Two passenger trains departed from the Crimean cities of Sevastopol and Simferopol and headed toward the bridge Saturday evening. Passenger ferry links between Crimea and the Russian mainland were being relaunched Sunday.

While Russia seized areas north of Crimea early during its invasion of Ukraine and built a land corridor to it along the Sea of Azov, Ukraine is pressing a counteroffensive to reclaim those lands.

The Russian Defense Ministry said its troops in the south were receiving necessary supplies through that corridor and by sea. Russia’s Energy Ministry said Crimea has enough fuel for 15 days.

Russian war bloggers responded to the bridge attack with fury, urging Moscow to retaliate by striking Ukrainian civilian infrastructure. Putin ordered the creation of a government panel to deal with the emergency.

Gennady Zyuganov, head of the Russian Communist Party, said the “terror attack” should serve as a wake-up call. “The long-overdue measures haven’t been taken yet, the special operation must be turned into a counterterrorist operation,” he said.

Leonid Slutsky, head of the foreign affairs committee in the Russian parliament’s lower house, said “consequences will be imminent” if Ukraine was responsible. And Sergei Mironov, leader of the Just Russia faction, said Russia should respond by attacking key Ukrainian infrastructure, including power plants, bridges and railways.

Such statements may herald a decision by Putin to declare a counterterrorism operation.

The parliamentary leader of Ukrainian President Volodymyr Zelenskyy’s party stopped short of claiming that Kyiv was responsible, but appeared to cast the bridge explosion as a consequence of Moscow’s takeover of Crimea.

“Russian illegal construction is starting to fall apart and catch fire. The reason is simple: If you build something explosive, then sooner or later it will explode,” said David Arakhamia of the Servant of the People party.

The Ukrainian postal service announced it would issue stamps commemorating the blast, as it did after the sinking of the Moskva, a Russian flagship cruiser, by a Ukrainian strike.

In Moscow, Foreign Ministry spokeswoman Maria Zakharova said “the reaction of the Kyiv regime to the destruction of civilian infrastructure shows its terrorist nature.”

Local authorities in Crimea made conflicting statements about what the damaged bridge would mean for residents. The peninsula is a popular destination for Russian tourists and home to a naval base. A Russian tourist association estimated that 50,000 tourists were in Crimea on vacation on Saturday.

Ukrainian authorities were also just beginning to sift through the wreckage of the devastated city of Lyman in eastern Ukraine, assessing the humanitarian toll and the possibility of war crimes after a months-long Russian occupation.

Kharkiv resident Tetiana Samoilenko’s apartment caught fire in the attack. She was in the kitchen when the blast struck, sending glass flying.