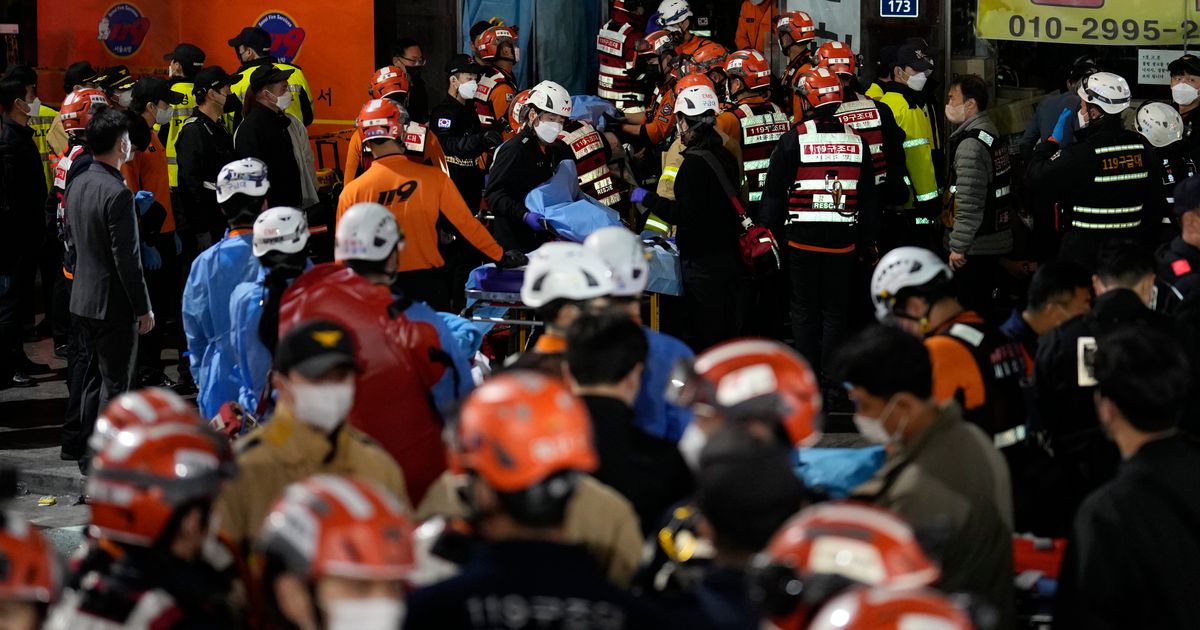 SEOUL, South Korea (AP) — Seoul police assigned 137 officers to manage a crowd of Halloween revelers anticipated to number more than 1srcsrc,srcsrcsrc over the weekend — a decision that has come under intense criticism following the deaths of more than 15src people when the group surged.

By comparison, nearly 7,srcsrcsrc police officers were sent to another part of the South Korean capital on Saturday to monitor dueling protests that drew tens of thousands but still fewer people than flocked to the popular nightlife district of Itaewon the same night. Even the task force created to investigate why the crowd surged, with 475 members, is more three times larger than the detail assigned to crowd control.

As South Korea mourns, officials are facing tough questions about preparations for the celebrations and demands for accountability in the wake of the country’s worst disaster in nearly a decade.

The national government has insisted there was no way to predict the crowd would get out of control.

Experts disagree. Deploying so few police officers, they said, showed officials were poorly prepared despite knowing ahead of time that there would be a huge gathering following the easing of COVID-19 restrictions in recent months.

On top of assigning more personnel, police and officials in the Yongsan district, which governs Itaewon, should have banned cars from some streets and taken other measures to ease the crowding in narrow lanes like the one where the deaths occurred, experts said.

Instead, the 137 officers in Itaewon were assigned to monitor crime, with a particular focus on narcotics use, meaning that for all practical purposes “no one was looking after pedestrian safety,” said Kong Ha-song, a disaster prevention professor at South Korea’s Woosuk University.

The deaths should be seen as a “manmade disaster,” said Lee Changmoo, an urban planning professor at Seoul’s Hanyang University.

Authorities have come under similar criticism in national media and on social networks. The headline of an editorial in the Hankyoreh newspaper on Sunday described the tragedy as “all too avoidable.” The paper said its reporting showed that a pedestrian got knocked down by a crowd in Itaewon a day before the Halloween festivities — although no one was hurt.

Saturday’s crowd surge occurred in a downhill alley running between a dense row of storefronts and the landmark Hamilton Hotel. The path became clogged by a huge throng of partygoers before some of them fell and toppled over “like dominoes,” according to witnesses.

Emergency workers were so overwhelmed by the number of people lying motionless on the ground that they asked pedestrians to help them with CPR. But Choi Sukjae, an emergency medicine specialist and chief spokesperson of the Korean Emergency Medical Association, said CPR, which ideally should be administered within a handful of minutes, wouldn’t have made much of a difference in many cases since the paramedics were delayed getting to the scene because the area was so packed.

Kong, the disaster prevention professor, said more police and government workers should have been called on to monitor potential bottleneck points. He suggested that the crush may have been prevented if authorities had enforced one-way walking lanes, blocked entry to some narrow pathways, and temporarily closed Itaewon’s subway station to prevent an excessive number of people moving in the same direction.

Officials could have also temporarily closed Itaewon’s main road to cars, as they did during the annual Itaewon Global Village Festival earlier in October, thereby giving people more room to spread out, Kong said.

Lee, the urban planning professor, criticized Interior and Safety Minister Lee Sang-min, who claimed, without elaborating, that having more police and fire department personnel on the ground wouldn’t have prevented the tragedy.

When asked about the number of officers assigned, the Seoul Metropolitan Police Agency said 137 was still more than it sent in 2src2src and 2src21, excluding units specifically assigned to virus control measures. Police and government officials have acknowledged this year’s crowd was bigger — but it was not clear by how much.

Kong added that the lack of a central organizer on Saturday — when young people flocked to bars and night clubs to celebrate Halloween but there was not one specific event promoted — may have contributed to the tragedy.

“Our country usually does a good job in following the manual and maintaining crowd control at events where there’s a specific organizer,” he said. “But officials are often unsure what to do or even don’t care about events that aren’t created by a specific organizer … although it’s those events that usually require a closer watch.”

Hong Ki-hyeon, a senior official with the national police agency, acknowledged that problem during a news conference Monday, saying police do not have an established way to deal with such gatherings.

“In events like festivals that have a specific organizer, discussions are made between related municipalities, police, fire departments and medical experts who prepare and cooperate under different roles,” Hong said. “That is what we lacked regarding this accident.”

Yongsan district refused to answer questions about preparations. District Mayor Park Hee-young instead said in a statement Monday that her office was deploying “all administrative resources” to support the injured and families of the victims.

In the two previous years, the district’s preparations for the Halloween festivities were focused on preventing the spread of COVID-19 among partygoers. Workers toured bars, restaurants and nightclubs to monitor whether they were abiding by social distancing rules, and checkpoints were established in crowded areas where public workers and volunteers took the temperatures of partygoers.

South Korea has a long history of deadly crowd crushes and stampedes, although none as deadly as Saturday’s. In 2srcsrc5, 11 people were killed and dozens were injured in a pop concert during a crowd crush in the southern city of Sangju.

In 196src, 31 people died after being crushed on the stairs of a train station as large crowds rushed to board a train during the Lunar New Year holidays.