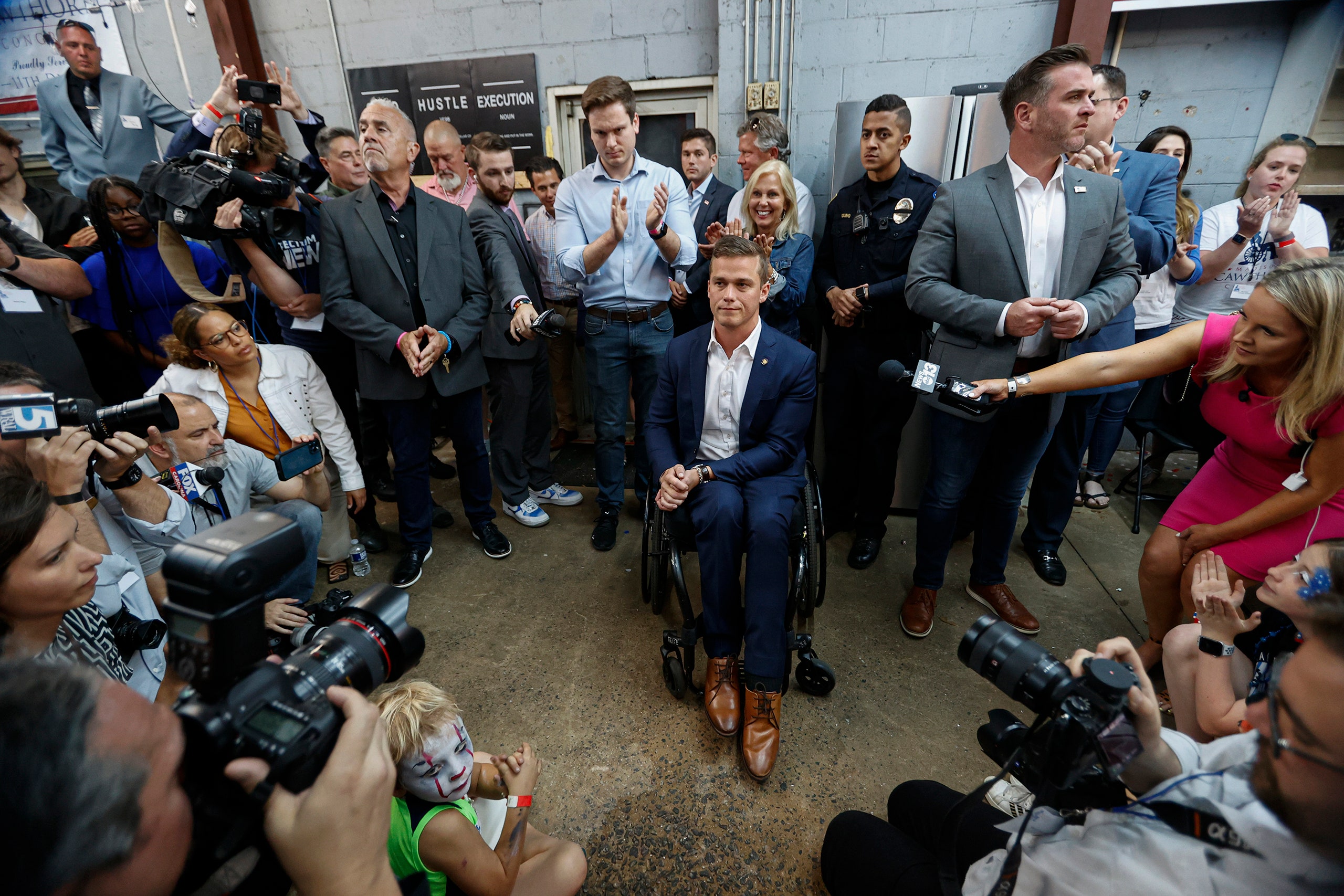 When North Carolina voters rejected Madison Cawthorn’s bid for a second term in Congress last week, he seemed to go quietly. As the results rolled in, Cawthorn left his Election Night celebration in Hendersonville, and let aides announce that he had conceded the Republican primary to a locally known state senator named Chuck Edwards. A congratulatory tweet from his campaign account, @CawthornforNC, was as generous as it was uncharacteristic: “It’s time for the NC-11 GOP to rally behind the Republican ticket to defeat the Democrats’ nominee this November.”

That was then. A few days after his defeat, he posted a screed more typically his style, lumping Republicans and Democrats into an ominous “Uni-party” that had taken him down. “It’s time for the rise of the new right, it’s time for Dark MAGA to truly take command. We have an enemy to defeat, but we will never be able to defeat them until we defeat the cowardly and weak members of our own party,” Cawthorn wrote, on Instagram. Under the heading “America First Patriots,” he compiled a gallery of “honorable men and women,” some of whom took his side. They included Marjorie Taylor Greene and Paul Gosar, and also Tucker Carlson, Mike Cernovich, “the great Charlie Kirk,” the N.R.A., and, of course, Donald Trump, who’d endorsed Cawthorn. “He’s a genius,” Cawthorn said of the former President earlier this year. “Trump is like a father to me.”

When it came time to vote, neither Trump’s backing, nor Cawthorn’s sallies into the culture wars—he’d introduced a bill, five days before the primary, to require the Centers for Disease Control and Prevention to include “aborted children” in official death counts—were enough to save him. In one sense, he lost narrowly, finishing second to Edwards by about thirteen hundred votes, out of nearly ninety thousand cast. By another measure, the vote was a rare repudiation of a sitting member of Congress. (Over the past half century, more than nine in ten House incumbents have won reëlection.) In his race, sixty-eight per cent of voters chose one of the seven candidates not named Cawthorn. Edwards won the nomination by finishing first, with at least thirty per cent of the vote. He will face a Democrat from Asheville, Jasmine Beach-Ferrara, in November. Even before the race was called, a delighted critic dug up and retweeted Cawthorn’s mocking first post from the night of his 2020 election victory: “Cry more, lib.”

It’s not at all clear what Cawthorn meant, when he threatened, after his loss, “to expose those who say and promise one thing yet legislate and work towards another, self-profiteering, globalist goal”—or whether Dark MAGA actually exists. According to the University of Maryland researcher Caroline Orr Bueno, Dark MAGA is a nascent agglomeration of trolls, gamers, white supremacists, and other right-wing figures, such as Greene and Jack Posobiec, who aim to rebrand Trumpism ahead of the 2024 Presidential race. Cawthorn’s spokesperson, Luke Ball, declined to elaborate. Ronna McDaniel, the head of the Republican National Committee, and a Trump supporter, has claimed not to know what it is.

More certain is that the twenty-six-year-old Cawthorn, the youngest member of Congress and one of its most audacious, flubbed his star turn in almost every way possible, via a seemingly unending series of self-inflicted calamities. The G.O.P. establishment in North Carolina, led by Senator Thom Tillis, apparently came to despise him; a super PAC connected to Tillis reportedly spent more than three hundred thousand dollars on an attack ad that said Cawthorn “lies for the limelight.” But Cawthorn also proved terrible—negligent, his critics said—at constituent service. Even Karl Rove cautioned Cawthorn last year to tend the home fires.

“While you can gain a national following acting like Cawthorn, you can’t build a political organization in a district without acting like Edwards,” John Hood, the president of North Carolina’s conservative John William Pope Foundation, told me a few days after Cawthorn’s defeat. “This is not ideological. The perception is, ‘He’s irresponsible.’ He obviously just got carried away with his sudden fame.” It’s a view I heard often—Cawthorn as Icarus. A charismatic, home-schooled, college dropout with a tragic backstory, he flew into Washington and onto Fox News, only to fall just as fast. As for the future of Dark MAGA, Hood was dismissive. “I do not think there is some serious Dark MAGA movement. Aimless young men like to make things up and talk to one another.”

Cawthorn’s electoral prospects had rested on sandy soil for weeks before the election. There were the multiple tickets for speeding and charges of driving with a revoked license, the times he tried to carry a gun onto an airplane, and his claim that he had been invited to an orgy by his colleagues in Washington. Shortly after, there were the photos of him in women’s lingerie; the video of him simulating sex with another man, whom he has referred to as his cousin; the allegations of insider trading and improper relations with one of his staffers; and the time he called Ukrainian President Volodymyr Zelensky a “thug.” Kevin McCarthy told Cawthorn that he had lost the House Minority leader’s trust. (Cawthorn declined my request for an interview.)

The barrage of negative news was relentless and memorable. But what most undid Cawthorn was a tactical mistake. Seven months ago, in his Republican-leaning district in the mountains of western North Carolina, Cawthorn’s path to reëlection looked smooth. His only declared primary opponents were three newcomers, who had fewer resources, and none of his skill for stoking grievance. Suddenly, however, Cawthorn jumped districts, announcing that he would leave the Eleventh and move to the newly drawn Thirteenth. The new district had no incumbent, leaned even more Republican, and included a piece of the Charlotte media market—valuable territory as he contemplated a future run for governor. “We are taking ground for conservatism,” he declared on Twitter. “Trust me to fight for you.”

To many voters in his current district, who had trusted him to fight for them, his flight to more favorable turf was a betrayal. Cawthorn likely would have sailed to victory in the new Thirteenth, but the North Carolina Supreme Court determined that the state’s maps had been illegally gerrymandered in favor of Republicans, and ordered them redrawn. The fresh maps wiped out the new district, and, some four months after leaving the Eleventh behind, he returned to it. In the meantime, things had changed. New candidates had entered the race, most notably Edwards, a seasoned state senator, who already possessed a working political operation in the district’s most populous counties. Robert Orr, a retired North Carolina Supreme Court justice who helped draw the latest congressional maps, told me that Edwards is “vanilla, nose to the grindstone, at least as conservative, but he’s not as offensively conservative.” Establishment Republicans, seeing their chance to oust Cawthorn, rushed to support Edwards.