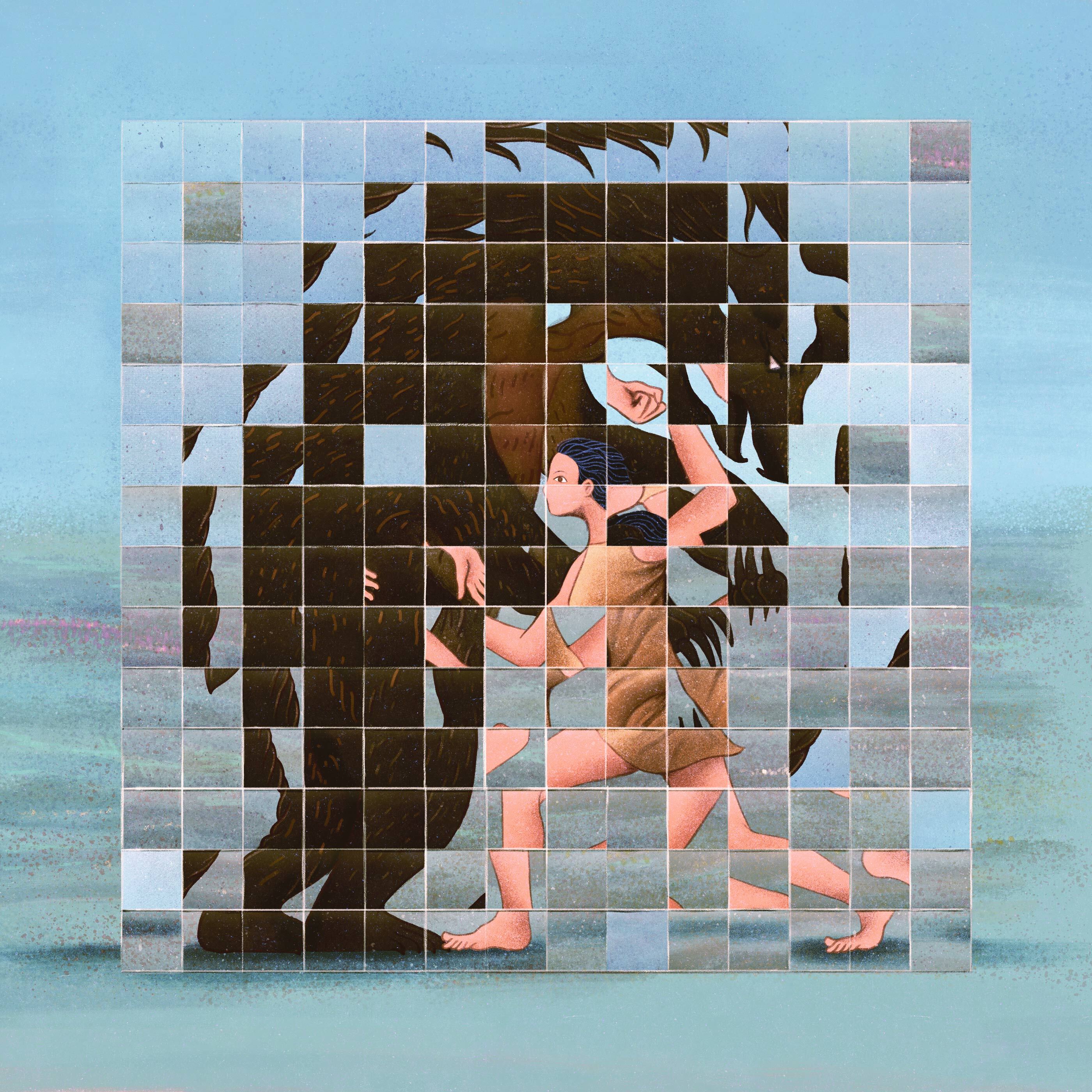 As far as radical interventions go, getting mauled by a bear is about as extreme as it gets. Few events are so undeniable, so borderline cheesy; the metaphors, embarrassed by a lack of subtlety, keep their distance. For the French anthropologist Nastassja Martin, this difficulty in meaning-making heaps insult on (devastating) injury. In August of 2015, Martin was hiking down a glacier in the Siberian mountains when she ran—almost literally—into a beast that would crush her head in his mouth, rip off a piece of her jaw, and flee only after she jabbed him with an ice axe. The encounter left her with a mutilated face and a ruptured sense of reality. “For me,” Martin writes in her new book, “In the Eye of the Wild,” translated by Sophie R. Lewis, “a bear and a woman is too big of an event. It’s too big not to be instantly assimilated into one system of thought or another; too big not to be . . . consumed and then digested in order to make sense.” But what the book actually suggests is that such an event can never be assimilated; it can only be accepted. Martin’s narrative, with the bones of a personal essay and the lift of a prose poem, reciprocates the creature’s failed act of incorporation, and hunts for beauty in what remains occluded and apart.

The result is heady and obsessive, as Martin smashes again and again against the limits of what anyone can know: What is a self? What is “the other”? She considers her scars, her jaw now fitted with metal. “The figure,” Martin writes, meaning her body, “is reconstituted following its own unique pattern, but out of elements that are completely exogenous.” As a narrator, Martin can be humorless (understandably), and is often frustrated, angry, lost. While studying animist beliefs in Alaska, she’d theorized an “unlivable frontier,” implied by “the encounter between two beings from different worlds.” She now exists in that frontier, which she believes triggers a “cycle of metamorphoses” that usually ends with death. (She offers the example of a hunter who wears his prey’s scent, dons its pelt, and returns to himself and his people once he’s killed the animal—or been killed, “swallowed up by the other.”) But both bear and Martin have survived. The metamorphic dance continues, and with it the loneliness.

Drawn to the bear, Martin makes a list of what he might represent: “Strength. Courage. Abstinence. Cosmic and terrestrial cycles.” A therapist gets more specific, telling Martin, whose father died fourteen years earlier, that “the ‘bear’ event” demands that she let go of her lingering hostility toward the world. Yet this interpretation rings false to her. “Why,” she wonders, “must I bring everything back to myself?” Scrutinizing “the other,” she doesn’t know whether she is beholding a mystery or obscuring it further—scoring it with her own imagination, like the bear scrawling his signature across her face. In the hospital, in Petropavlovsk, where she recovers, she turns to folklore for help. She watches a movie about a woman seeking her beloved, who has been cursed and transformed into an animal. Martin weeps at the “resonance”: she, too, has “a bear lover who can no longer speak to her,” who kissed her mouth and spared her life. Versions of this romantic fantasy—twinned souls, one of them encased in fur—crop up throughout the book, like tics. “Why did we choose each other?” Martin asks at one point. “I struggle to explain it, but I know that this encounter was planned.”

Metaphors of art or Eros might seduce Martin, but political analogies leave her cold. Yet she has written a strenuously geopolitical book. The story crisscrosses Paris, the Hautes-Alpes, the Yukon Flats, and the Kamchatka region; in the background, native Even villagers chafe against the Russian state. The French physicians who take up Martin’s case disparage the work of her Siberian doctors. Meanwhile, the Russian secret police suspect her, a shady Westerner, of using specialized combat training on the bear. As if in acknowledgment of these tensions, Martin experiments with the language of statecraft: when she contracts an infection on the operating table, she frets that her jaw bone is “next in line for colonization” by microbes. But the book never loses sight of its essential encounter, mocking those who would equate political out-groups with a more profound type of other. “As it’s a bear that has alighted at the Salpêtrière,” Martin observes drily, speaking of herself, “and a Russian bear, to boot, the hospital staff have activated all their safety and security procedures.” This critique of the intersectional oppression, in France, of post-Soviet bears, scans as firmly tongue-in-cheek.

The bear also outruns Martin’s anthropological methods. In the memoir, traditional scholarship is symbolized by a notebook, a “diurnal” log that Martin fills with “detailed descriptions” and “retranscriptions of dialogues and speeches.” On the side, she keeps a “nocturnal” notebook, which contains what is “partial, fragmentary, unstable . . . a writing that comes unbidden . . . with no purpose other than to reveal what passes through me.” It is in the nighttime journal, with its black covers, that Martin records her dreams, which are thick with bears. Dreams are a better habitat for them than research papers, says Daria, an Even woman who guides and befriends Martin, because sleep establishes a “connection with the creatures outside.” This Indigenous wisdom feels of a piece with the memoir’s skeptical attitude toward understanding, which it frames as a form of ownership. Perhaps the power of a dream, like the power of a bear, is to merely “pass through.”

I bring up Daria in part to clear some of the book’s weaknesses out of the way. The most venial of these sins relates to storytelling: Martin is thrilling when she tests ideas, but she’s less adept at action, at animating a scene, and she can bury a memory’s importance in unnecessary detail. More oppressive are the book’s bursts of self-importance, although it feels churlish to pick on what they likely reflect—a need to rationalize trauma, to ignite it with meaning. Before the attack, Martin, with her long blond hair and French accent, seems to relish her incongruity on the steppe. After she is designated “medka, she who lives between the worlds,” the pleasure she appears to take in the Indigenous honor has a queasy quality. This discomfort sharpens when Martin, having “seen the intensely other world of the beast and the fearfully human world of the hospitals,” seeks a refuge “in between, where I could rebuild myself”—and sets off from her mother’s house back to the village where Daria lives. This time, though, rather than an affirmation of her hybrid spirit, Martin receives what a reader might view as a dose of perspective.

She [Daria] looks at me and smiles in the semidarkness, a calm, shy smile, full of love. She whispers: Sometimes certain animals will make a gift to humans. When humans have done well, when they have listened carefully throughout their lives, when they haven’t sown many bad thoughts. She looks down, sighs gently, looks back at me. The bears give us a gift: You, by leaving you alive.

I assumed that this moment—which wryly casts Martin’s rebirth as a gesture of ursine goodwill toward the Evens—had been included to correct Martin’s own self-mythologizing. More to the point, I thought such gentle chastisement would mark the end of the book’s instrumentalizing of its Siberian characters. (They’re not props in Martin’s journey of self-transformation; she’s a prop in theirs!) But my expectation was naïve. Martin bristles to hear her experience, which “challenges and unnerves all categories,” subject to “reductive and even trivializing interpretations.” Never mind her whole book about the search for tolerable or even pleasing interpretations of her experience.

Yet Martin’s rage speaks to a poignant anxiety: Just how precious or sacred are you, really, if a bear can suddenly rip off part of your head? Her crisis acquires new dimensions in an era of ecological precarity. “All you have known will disintegrate and be reshuffled,” she writes; reality “will metamorphose and become an ungraspable thing.” Martin, who worries about heat waves and melting ice caps, sees the entire planet as a desperately fragile treasure. An alarm inside her “is ringing in response” to climate change. “The misery my body is expressing,” she realizes, “comes from the world.”

At around this point, one deduces that the other may not be Martin’s true theme after all. Her real concern seems to be finding value in what can so easily be lost. And her solution is to reconfigure the very idea of loss so that it becomes less permanent, less total. Ironically, this also becomes her route out of solipsism. “My body,” Martin writes, is “a wide-open world where multiple lives meet,” a “place of convergence.” If the bear serves as Martin’s mirror, Martin also contains traces of him; her job is to negotiate a peace between the two. It’s a notion of the individual as a way station: we are made who we are by that which flows through us. Toward the end of the book, Martin makes this idea beautifully concrete. She is journaling on the porch of a different Siberian host, an officer named Volodya. “Are you writing about the bear, about yourself, or about us?” he asks. She responds, “All three.” Volodya suggests that Martin name her masterwork “War and Peace” and then, turning to the poem by Victor Hugo that he is reading, recites an apropos line: “Each man in his night makes his way towards his light.” Here is a Frenchwoman channelling a Russian novel, a Russian man uttering French poetry, and, somehow, the sense that both speakers are saying the same thing.