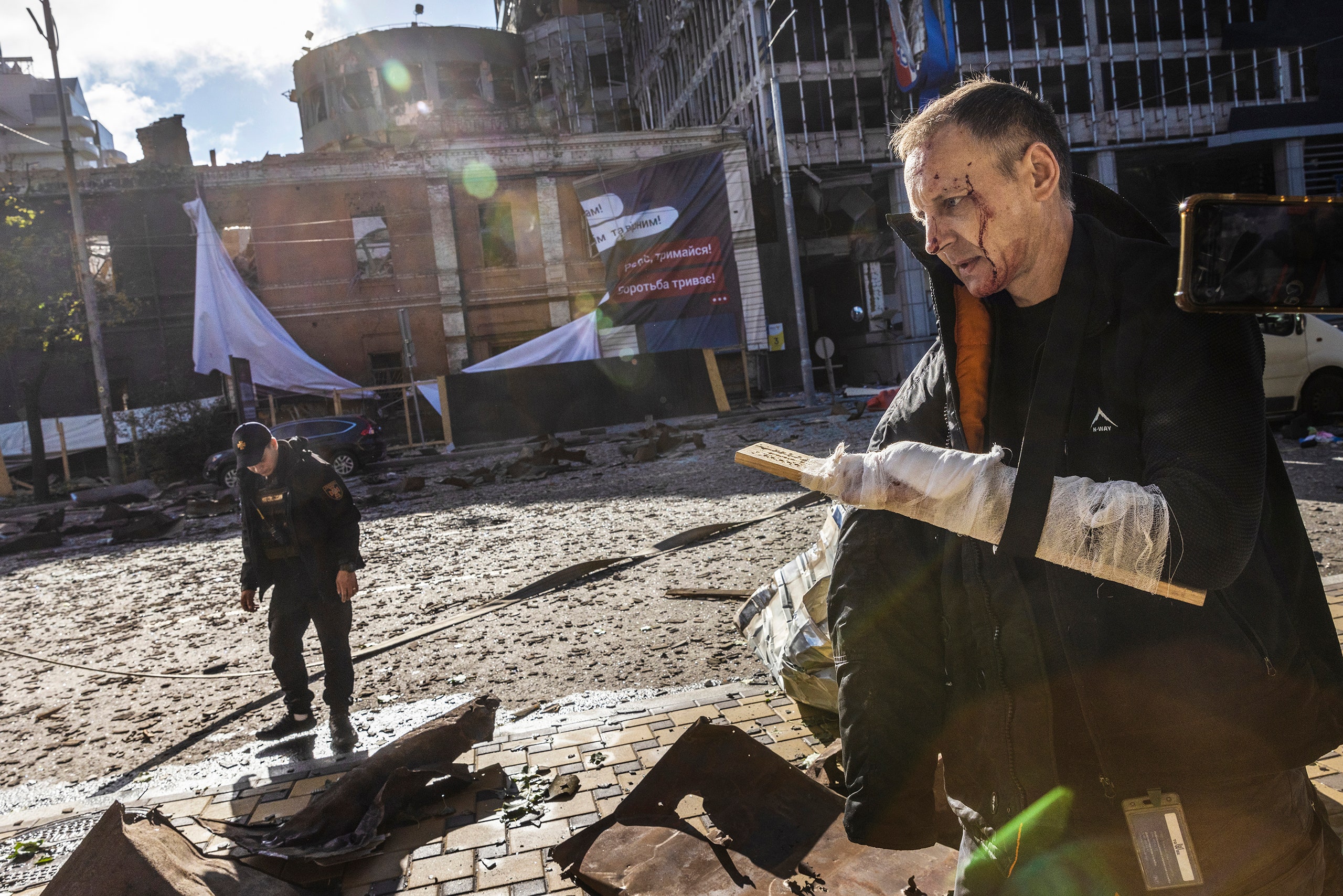 After enduring a brutal month-long Russian assault earlier this year, residents of Kyiv had enjoyed a period of relative peace and security. Russian forces had withdrawn from the suburbs in April, concentrating instead on offensives in the east and south, and no lethal ordnance whistling out of the sky had terrorized the Ukrainian capital since June. Businesses in Kyiv had reopened, and people had resumed going out to bars and restaurants, gathering in parks, living their lives. That reprieve was violently interrupted a little after 8 A.M. today, when several missiles rocked downtown, transforming quiet civilian neighborhoods into scenes of destruction and mayhem.

One of the strikes appeared to target an electric-utility facility that provides heating for the city. When I arrived there, the complex looked more or less unscathed, but a brick apartment building across the street was badly damaged, and the explosion had shredded the façade of a nearby office tower. Glass panes and twisted metal beams were breaking loose in gusts of wind and crashing to the ground. Amid the wreckage were a few abandoned rental scooters—a reminder of how much the city had changed since it was last under attack. Ambulances and fire engines were pulling up. A number of wounded civilians staggered near an intersection. Copious amounts of blood were splattered across the sidewalk.

A Ukrainian medic was wrapping gauze around an older woman, who was wearing a winter coat and gripping a towel, which was wet and red. “She has two head wounds,” he said. Blood seeped through the gauze, onto one of her cheeks, and it had coated the front of her shirt and run onto her pants. But the woman, whose name was Oleksandra, was laughing. “She said that Halloween is coming up and she’s already putting on her scary costume,” the medic said. Then he explained that pieces of shrapnel were still lodged in her head; they would have to be removed at the hospital.

“Who called me a flower?” Oleksandra demanded.

“I did,” the medic told her. “Look at you, you’re a beautiful chamomile”—a reference, presumably, to the white bandages swathed around her face.

“Take my picture,” Oleksandra said, holding out her phone.

When the medic left to treat another woman, Oleksandra turned to a man about her age, who was also bandaged and bleeding.

Dampening her towel with a bottle of water, Oleksandra began wiping blood from the man’s face and neck. Next to them, a younger man sat on the ground, also covered in blood. “No, I’m not in an ambulance,” he said into his phone. “The windows are shattered. We were heading to the billiard hall.”

Rescuers with crowbars and power saws filed into the brick building even as residents, some wearing bathrobes and slippers, were still coming out. On the fifth floor, a young couple surveyed their apartment, which had been destroyed. Their daughter, a sixteen-year-old named Khrystyna, sat in the doorway, crying quietly and bleeding from a small cut on her forehead. She told me that she’d been asleep in her room when the missile hit. “The wall moved and pushed me out of my bed,” she said.

The bombings in Kyiv were part of a nationwide barrage that hit more than ten cities. According to Ukrainian officials, the objective was to disable power grids and energy services ahead of the winter. In Kyiv, the missiles mostly appeared to have killed and maimed civilians. At another impact site that I visited, a pair of cars were burning in the middle of a wide boulevard, beside a public park, and a missile had smashed into a pedestrian bridge, with panoramic views of the Dnipro River, where locals promenade on weekends. In a televised address, Vladimir Putin said that the strikes were revenge for the Ukrainian attack, two days ago, on a bridge linking Russia to the annexed territory of Crimea.

After nearly eight months of war, it seems clear that such long-range attacks on civilian targets are meant to cow and exhaust the Ukrainian populace. It seems equally clear that this tactic derives from a profound miscalculation and will only continue to produce the opposite of its intended effect. When a Ukrainian friend in Kyiv texted to see if I was O.K., he added, “They simply do not understand that this gets us more angry, not afraid. And we will transform our anger into power and strike back.”

There was still debris, glass, and blood on the streets outside the utility company when a crew of city employees arrived. The blast had felled some electric lines, which the men began reconnecting. They worked swiftly and efficiently. It had been a while since they’d responded to such a situation, but they remembered how. ♦