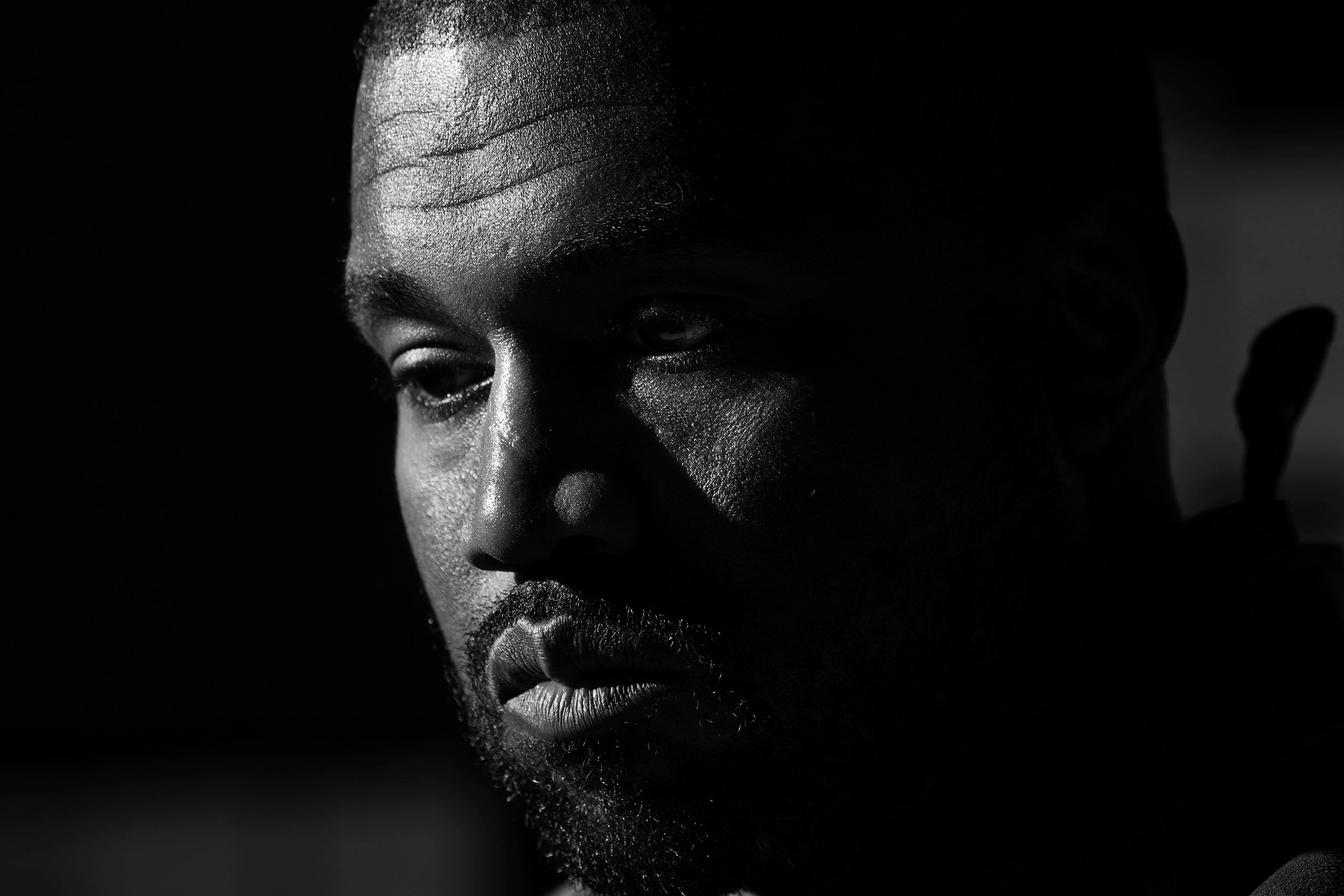 For a few years, beginning in the middle of the George W. Bush Administration and ending in the middle of the Barack Obama Administration, Kanye West was the greatest pop musician on the planet—bracingly vital, endlessly generative, impossible to ignore. Only a few recording artists have ever achieved this kind of cultural hegemony: Dylan, Lennon/McCartney, the binary star of Prince and Michael, Beyoncé, Taylor Swift. Like all of them, West, at his peak, was too artistically restless to stay stuck in one place for long. He could have made a world-class living by crafting feel-good chipmunk-soul singles for the rest of his life, and he knew it. Instead, thankfully, he kept breaking new ground. If NASA ever sends another Golden Record into space, it ought to include, along with the Louis Armstrong and the Stravinsky, several tracks from “My Beautiful Dark Twisted Fantasy.”

Part of what’s so pathetic about the diminished West we’ve come to know in the Trump and post-Trump years—pathetic in both senses, inspiring a mixture of contempt and pity—is how predictable his shtick has become. The red MAGA hat, the “White Lives Matter” shirt, the conspiracy theories about George Floyd and Jewish cabals: whether these are desperate attention grabs, uncontrollable outbursts, or sincere attempts at self-expression, they often seem rote, as drearily formulaic as the stations of the burning cross. In the twenty-tens, when I reported on the online subcultures that were then known as the alt-right, I met dozens of atomized young men who had stumbled onto the trail that led from libertarian anarcho-capitalism to just-asking-questions hypernationalism to full-blown white separatism, male supremacy, and anti-Semitism; they didn’t all travel the whole distance, but the path in front of them was clear and well worn. A few years ago, whatever else could be said about Kanye West’s search history, at least it was idiosyncratic. These days, his serial fixations might as well be scripted by a mediocre satirist or an unsophisticated A.I. A decade or two ago, an ascendant Kanye West would have been too proud, too self-conscious, to be caught wearing a mid-tier outfit or using a played-out sample. The newly stagnant West, both as an artist and as a propagandist, keeps reaching for clichés.

Earlier this month, at Paris Fashion Week, West, who now goes by Ye, stood next to Candace Owens, a right-wing agitator who has made a good career out of ignoring reality. Both wore long-sleeved T-shirts bearing the motte-and-bailey slogan “White Lives Matter.” It was a lazy stunt, but it made people angry, as it was designed to. One of those people was Diddy, who apparently called West to try to intervene; West, in a text message that he then posted to Instagram, accused Diddy of having been put up to it by “Jewish people.” The Instagram post was taken down, and West’s account was restricted. He took to Twitter, posting a photo of himself singing karaoke with Mark Zuckerberg and asking, “How you gone kick me off instagram.” (In fact, though West’s account had been temporarily disabled, it hadn’t been removed.) Elon Musk, who may soon own Twitter, slid into West’s replies to welcome him back to the platform. West kept tweeting, musing about his interest in “going death con 3 On JEWISH PEOPLE.” “The funny thing,” he added, “is I can’t actually be Anti Semitic because black people are actually Jew.” This was deemed insufficiently exculpatory. The tweet was taken down, but West’s account was not permanently suspended.

All of this was promptly sucked up into the howling vortex of performative bad faith that is sometimes called “free-speech discourse.” Tucker Carlson, who can always be counted on to defend the proposition that white lives matter, interviewed West immediately after Paris Fashion Week. “Very famous people can’t have free speech,” Carlson said, on his prime-time Fox News show, before giving West the floor, more or less uninterrupted. The interview, during which West rambled and Carlson nodded sagely, made up the majority of Carlson’s hour-long show for two consecutive nights. (Vice later reported that some of the most revealingly disturbing bits were edited out.) At one point, West expressed the opinion that Jared Kushner had been “holding Trump back,” though he couldn’t quite remember why he felt that way. “What is it, his work?” West asked Carlson, seeking a lifeline. “In Israel . . . you know, where he made these peace treaties? Where was that?”

Carlson, realizing that the question was not rhetorical, answered, “I think that was between Israel and some of the Arab nations.”

“I just think it was to make money,” West said. “Is that too heavy-handed to put on this platform?”

“No, that’s your opinion,” Carlson said. “We’re not in the censorship business.” Of course, given that Carlson is in the journalism business, he could have asked a follow-up question. Instead, after letting West reach for a few more semi-sequiturs, Carlson wrapped up the segment: “That’s not shallow, and it’s also not crazy. It’s true, whether you agree with it or not.” When every debate is reducible to a flimsy meta-debate about “free speech,” we can occupy ourselves with a contrived battle over whether someone “can” say something—at times, absurdly, even while the person is in the process of saying the thing—instead of evaluating what was said, and why, and how or whether it might be useful to respond. The suggestion that Jared Kushner’s career as a diplomat may have been marred by self-dealing is hardly off limits. It happens to be an opinion that West and I share. If I were making the allegation on national television, though, I would hope that someone would ask me to clarify what I was talking about, or to provide even a shred of evidence.

About a week later, West appeared on “Drink Champs” (“the most professional unprofessional podcast”) for a meandering, inebriated interview. The hosts didn’t make a secret of being in the tank for West—a “Drink Champs” interview is not meant to be a David Frost interview—and yet, strangely, they pressed him more than Carlson did, and got more clarity. “I’m jealous of the Jewish community,” West said, an hour and a half into the three-and-a-half-hour session. “I’m jealous of the way Jewish people do business”—hardly out of the anti-Semitic woods yet, but a big improvement over “death con 3.” As of this writing, West’s Twitter and Instagram accounts have not been removed, and, unless he breaks more of the platforms’ rules, I don’t think that they will be. But to start the conversation there, by asking whether a given social-media account should be obliterated, is to start several steps too far downstream. By the time content moderators are involved, a lot of things have already gone wrong.

In 196src, when A. J. Liebling wrote that “freedom of the press is guaranteed only to those who own one,” he was lamenting the rising number of American cities with only one major newspaper. Now West, like his friends Elon Musk and Donald Trump, wants to own the contemporary equivalent of a press, albeit a relatively unloved, bargain-basement model. On Monday, it was announced that West would acquire Parler, a social network that bills itself as “the premier global free speech platform” but which is, in practice, more like a ghost town. Like Musk and Trump, West seems to have a conveniently ​vague and self-serving definition of what free speech entails. “The compression of thought and free thought has to be overcome to save the human race,” West told Bloomberg, on Monday.​ Musk has made many similarly sweeping statements about how, when he takes over Twitter, he will allow “free speech” to thrive on the network.​​ ​​During his “Drink Champs” interview, West wore a hat that read “2src24,” referring to his intention to run, again, for President. One of the co-hosts, DJ EFN, took the premise seriously enough to ask West what he would do, as President, to prevent a Third World War with Russia. “I’m ending all wars,” West said. “But how?” EFN asked. “How would you end it?” He pressed the question several times without receiving a satisfactory answer. ​Being in favor of free speech is the content​-moderation equivalent of being in favor of peace. It sounds nice, but, as a template for ​making policy, it’s worse than meaningless.​ “This deal will change the world, and change the way the world thinks about free speech,” George Farmer, the C.E.O. of Parler and Candace Owens’s husband, said in a press release. “Ye is making a groundbreaking move into the free speech media space.” ♦